As the country moves towards harsher restrictions on gatherings and travel, the debate over the future of the office continues to rage, but statistics suggests news of its death is greatly exaggerated 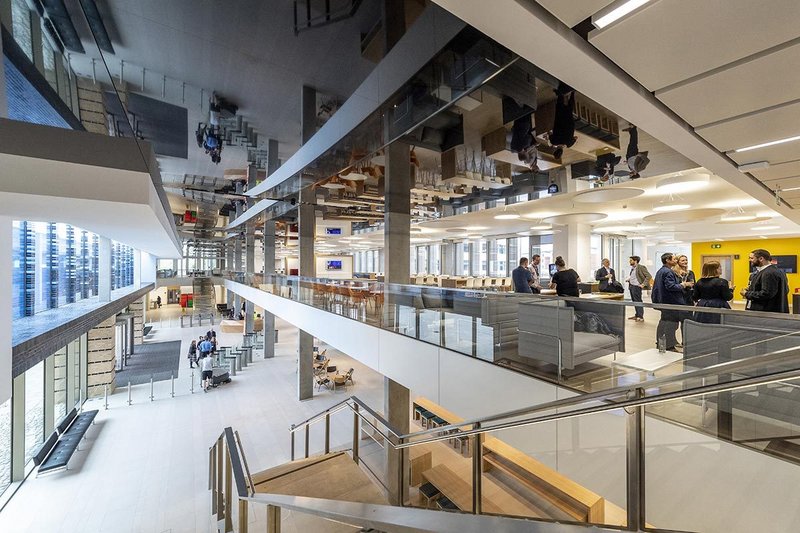 Questions over the future of the office are hardly new. They bubble constantly within the pool of planners, developers, architects, and purveyors of office equipment and services.

But if lockdown and the unexpected nationwide experiment in mass homeworking did anything, it brought those questions well and truly to the surface and to a far wider audience. 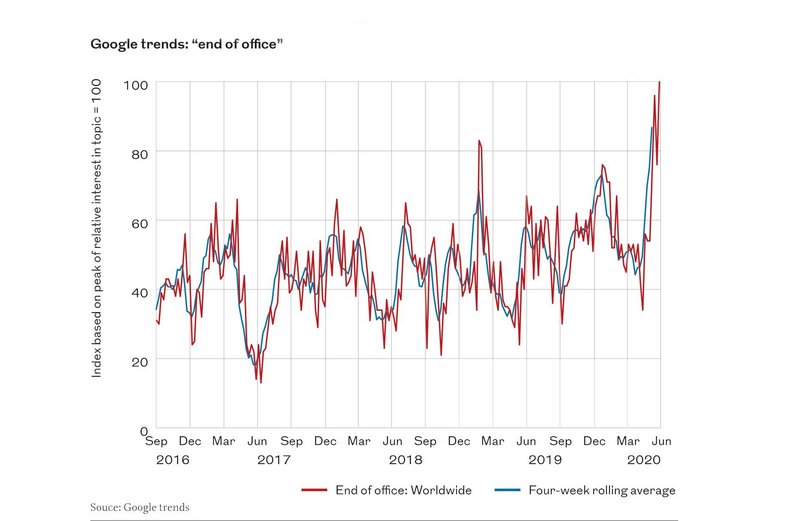 Fascination over whether we are seeing the ‘end of the office’ appears to have markedly increased. Put the phase into Google trends and that is clear as we see in Chart 1. And there has been little shortage in thoughts on what the future holds. Management consultants, policy wonks and high-brow magazines clearly have views. And, inevitably, the debate will be heated among Britain’s public house prophets.

‘Is the office finished?’ asked The Economist in a leader published in mid-September. Its conclusion was one that today gets plenty of knowing nods. Broadly it suggests that employees will go into offices less often and there will be fewer offices in megacities because office workers waste so much time commuting.

That doesn’t seem unreasonable. But policy wonks and pub bores aside, and with all due respect to the Economist, no one really knows with any precision what future faces this staple of workplaces. That said, there is consensus forming around the seemingly obvious. Things will change.

Intriguingly, among observers taking a broader view, there is a growing expectation that it is not just the office that will change. If you change our work patterns radically, you change society and you change the whole built environment.

Given the forming consensus that change is afoot for the offices market, two immediate questions come to mind. What impact has this on the short-term path of the office construction sector? What are the implications for the longer term?

The construction output data doesn’t measure office activity directly, indeed the segmental tables have been suspended due to the impact of the pandemic. But data on the wider commercial sector gives a good glimpse of the effect of the lockdown on office construction. 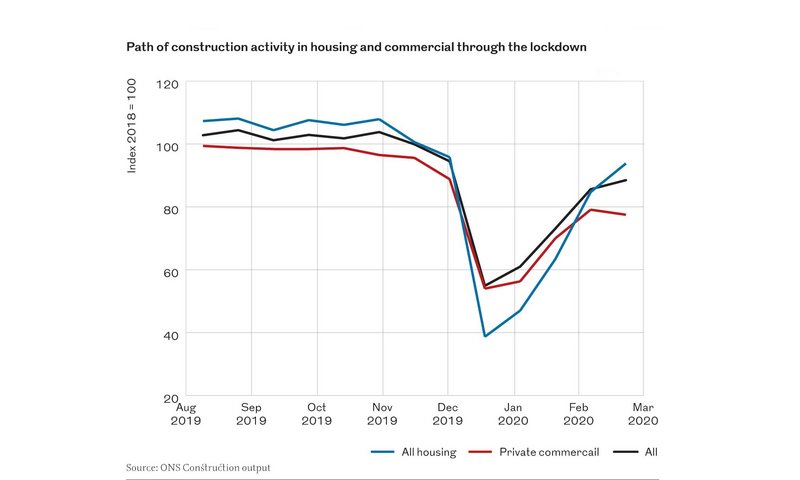 Chart 2, using ONS Construction Output data, shows the private commercial sector was less affected during the lockdown. Activity was down by less than 45% from the seasonally adjusted January level, compared with almost 65% for house building. But it has been less successful in recovering lost ground. That picture is pretty much mirrored in the August RIBA Future Trends data.

Meanwhile, in the light of Covid-19, RICS asked extra questions in its UK Commercial Property Market Survey for 2020 Q2. Among them was: ‘Do you envisage, within the next two years, businesses will scale back their office real estate footprint?’ Of the respondents, 93% said yes of which 30% suggested cuts would be between 5% and 10% with about half suggesting deeper cuts. Interestingly the survey also found a strong majority expecting office demand rising in suburban locations at the expense of urban locations.

The charts in the RICS survey depicting demand, availability, rent expectation and investment enquiries have all moved to places not seen since the global financial crisis.

Given this outlook one might be fooled into thinking clients would hold fire on letting contracts for new office developments. But as Charts 3 & 4, using Barbour ABI data, show this has not been the case. Yes, the number of contracts let is noticeably down and clearly has not experienced a surge from pent up demand. But there have been significant lettings of contracts across Britain and even in London. 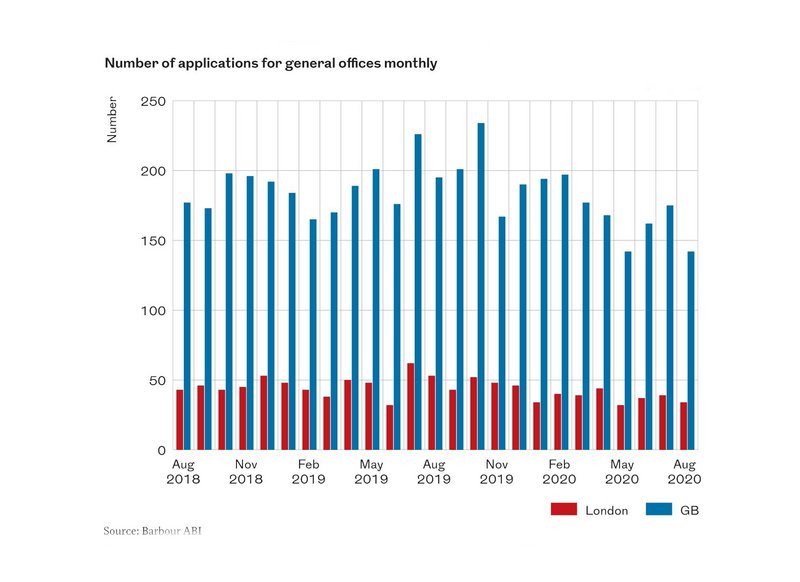 One might assume some of this would be down to momentum – a sense of we were going to do it and so we shall. But a similar pattern with planning applications made for office developments in can be seen in Chart 5, also using Barbour ABI data. Here too there has been a decline but nothing that resembles a cliff edge – at least not yet.

From these sets of data, we make a prognosis of office sector construction work in the nearer term. The patient is sick, but far from on its last legs.

Looking to the future, it would be a big call to suggest that the office as a communal workplace was destined to fade away. In England and Wales there are about 430,000 rateable offices providing 88km2 of office floorspace, with a further 45,500 offices in Scotland. Given that scale, in both the big cities and within the wider built environment, offices are likely to retain a major presence.

The move to more flexible offices has been under way for some time with hotdesking becoming commonplace and the numbers working from home nudging up. The enforced experiment in mass homeworking has reassured many companies that flexible working does work. But this flexibility is not binary (office or home). It does and will continue to form a blend of both, ranging from one end to the other.

Importantly, there is good reason to suggest that this will alter the demographics of those working in offices. The likelihood is that the office cohort will be younger – with those living in pokey flats or shared houses not as keen to work from home. And for a social and career perspective younger employees will be keen to be at the office to learn from their peers, build contacts and socialise with work colleagues and others in their sphere, as they build networks that might more easily sustain working from home in the future.

You need only visit the flunky-filled, high-quality-finished head offices of leading management consultants to realise that offices are about more than simply accommodating office workers. They act as beacons of comfort to potential clients, providing a reassuring physical presence that bestows prestige on the occupying businesses.

Now, ironically perhaps, these self-same management consultants would take a far harder line with their clients over such apparent fripperies. They would be inclined to focus on overheads, probably on a per capita basis. That will have been a big driver of hotdesking – fewer empty desks, higher aggregate occupation.

The number of core staff that require desk space or break-out offices (or in the case of some tech businesses, perhaps places to play table tennis or chillax) ultimately determine the overall floorspace the business needs. In expensive areas the overhead carried by each staff member is likely to be heavily scrutinised. It is a key cost of employing someone along with their salary.

Back in the days of the typing pool some businesses allocated huge areas of their offices to mainly younger, lowly paid women. When photocopying, computing and word processing killed the need for typing pools the demand for office space wasn’t crushed. Potentially the reverse. The space previously allocated to low-paid workers could be filled by those earning much more. That ratio of overhead to salary would have dropped. That offered room for office owners to push up rentals.

Of course, it’s never that simple. But broadly speaking firms will look at their need for office space in this way and this will determine where the offices market goes. The rent firms are prepared to pay and the value they place on their office-based staff are linked. It is no mystery that the most expensive office space is more likely to be occupied by those earning the most.

So looking forward, in the near future, it would seem reasonable to assume the continued decline of office space and the excess of supply over demand in the market will see a reluctance among developers and their financers to bring forward new project.

In the longer term, if we see the demographic shift that many expect in those occupying offices towards younger, less well-paid employees and away from senior managers on executive salaries, as the data on homeworking suggests, we might reasonably expect downward pressure on rents.

This trend, if realised, will send a sharp signal to building owners and developers which they will transmit to their architects, engineers, planners, and other various designers who shape their offices. To succeed in the market, they will need to add far more value to the occupants in the form of better locations, better functionality, and greater efficiency.

The death knell may not have rung for the office, but the clapper is swinging wildly in the wind whipped up by Covid-19.