Niall McLaughlin, winner of this year’s Charles Jencks Award, draws confidently on all traditions to reshape and develop them into something new

Sometimes in architectural history a particular city sparks a shower of individual talents, a starburst of excellence. Good designers emerge to dominate a local scene, emboldened by a self-generating tradition of creative conflict. Rome in the 17th century during the Bernini-Borromini wars is one well-known example. Another is London in the 1970s, when high-tech architects sparred with post modernists, both sides denying the labels while productively stealing from each other. Competitive clashes produce veritable starbursts, just as colliding galaxies are responsible for the great explosions of new suns onto the cosmic firmament.

In literature, this theory of creative conflict became dominant with the influential theory of Harold Bloom’s famous Anxiety of Influence, 1973. He argued that competitive creativity is carried on by every generation of artists as a tumultuous dialogue with the past; the anxiety of followers who have to respect their tradition yet swerve from it and show independence, love their parents and kill them at the same time.

When I asked Niall McLaughlin how he related to the architects he liked – Mies, Louis Kahn and Rudolph Schwarz – he mentioned a different view, the one Bloom was trying to overthrow. His reference was TS Eliot’s Tradition and the Individual Talent, 1919, the most cited view of tradition in literary modernism. Eliot argued that tradition requires the novel variation to be introduced, in order to keep the past alive and revalued. Furthermore, that the western tradition of literature constitutes a kind of ‘ideal order’, where the new work simultaneously changes all previous work, or the relations between them. This classical notion of the past alive in the present is expressed by Eliot in different ways: as the ‘mind of Europe,’ as if Homer and Virgil were alive today, and as a ‘chemical reaction,’ where the reactants are poetic expressions and emotions, but impersonal ones. The pressure of these reactions creates waves across time, hence the immortality of poets or those working in a very wide, continuous tradition.

Dublin architecture since the 1970s is a good example of the Eliotic tradition at work. There are the exemplary modern buildings that McLaughlin cites as his influences when he studied and worked there – for instance, the Trinity College Library of ABK. And then the influence of many superlative individuals such as Scott Tallon Walker (RIBA Gold Medallist), or O’Donnell & Tuomey (ditto), or Grafton Architects, or more recently Henaghan Peng. Many threads unite these characters. They are all engaged in social and urban architecture, to be expected in a classical city like Dublin, and they straddle the stylistic divides that competition forces on a global city. This is particularly ironic today, with Brexit, and the competitive race to the bottom for Dublin, the low-tax haven of capital, about to be challenged by London.

In any event, these architects (and McLaughlin, who has moved to London) constitute a recognisable Dublin School, with both the continuity and change that gives each architect the confidence to extend tradition in the way Eliot describes. It’s a strange idea – we don’t speak Homer’s language – but a few architects today can still design in dialogue with the Gothic, or Borromini, as if having a creative conversation with the dead. And McLaughlin has certainly spoken to these eras and designers, with one of his superlative works: the Ripon College Chapel.

McLaughlin is the kind of architect’s architect who gives the profession a good name. Staying within the confines of a particular style and tradition – broadly put somewhere between classicism and modernism – he is nonetheless not worried about changing both by hybridising them, nor frightened of being called post modern. In the time honoured manner of Mozart, he takes well known themes and tropes – the classical repertoire of the five platonic solids and their cognate modes (ellipse, parabola, pointed arch and so on) – and plays new games with them. This free style classicism of vigour and light is the Old Game as defined by Lutyens, but it is orchestrated much more lightly without becoming etiolated. His structural logic carried out with their repetitive geometries creates a new kind of optical architecture. Ripon’s Bishop Edward King Chapel has its primitive strength, delicacy and content – virtues not usually found together – and others reminiscent of James Stirling (another great influence on the Dublin School, as was Leon Krier).

This is not the place to analyse its great structural gymnastics, mixing Schwarz, Nervi and Gothic, nor to show how he turns the classical truss upside-down in a stunning move that, with all his amazing ellipses and ovals, Borromini never tried. I don’t have the space to detail the Corbusian architectural promenade through the spaces, nor the subtle articulation up the facades that Alberti and the Renaissance palazzo advised. It’s also minimalist Mies with the Op Art of Bridget Riley. So there – if that isn’t enough influence-name-dropping it is enough to bear out McLaughlin’s Eliotic Theory of tradition – always extend, always bend. Thinking of Bloom’s counter theory, of creative conflict, I asked Niall who were his pet hates, which architects he really disliked, what general problems did he want to overcome? Long silence; no anxiety and competitive anguish here.

His Alzheimer’s Centre in Dublin is one of the most subtle and appropriate designs for a sensitive building task I know. It stems from long careful research on the condition, and was reinterpreted for this year’s Venice Biennale in his installation ‘Losing Myself’. McLaughlin’s planning and city design are equally based on particular and local research.

Materiality, geometry, light, metaphor, abstractions, ornament and elegance are the obvious qualities. Quotations and iconic expression are sometimes prominent – and unembarrassed, unlike much other apologetic work today. Direct and bold, McLaughlin will even use neo-grec horses as mass-produced panels for his Olympic Housing, and not be accused of pastiche. Obviously he has a strong enough belief in eclectic practice to overcome the usual taboos that straightjacket architects, and this may stem from the confidence of working within an elastic tradition. For self-assurance he does have, a quiet poise in solving the next move in the long game of architectural chess. Perhaps there are only a handful of other such architects today: Stirling was certainly one. In any case, if all periods of architecture are possibly alive today – or immortal as Eliot would have it – because of computation power, globalisation and a host of other forces, it seems to be an elasticised tradition. And one with reciprocal spring, or two-way force, is hard at work here – only awaiting some big commission for this young architect of 54 to show it to the world. 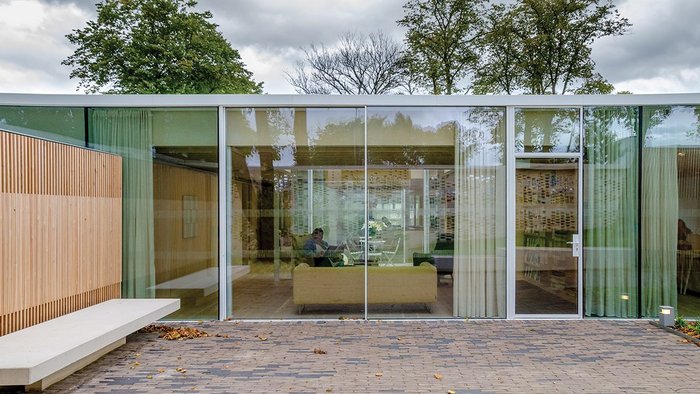 Detailing for the Stirling 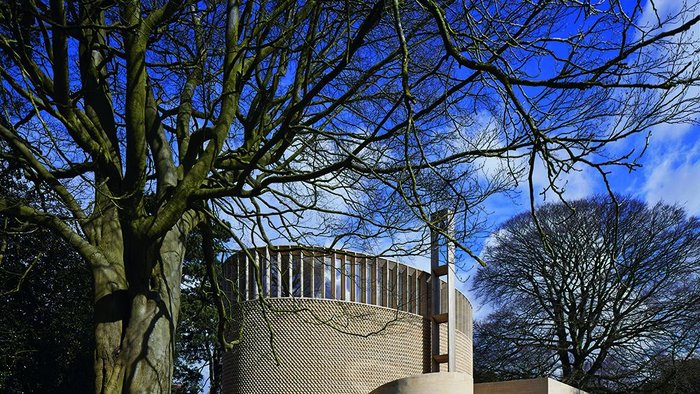 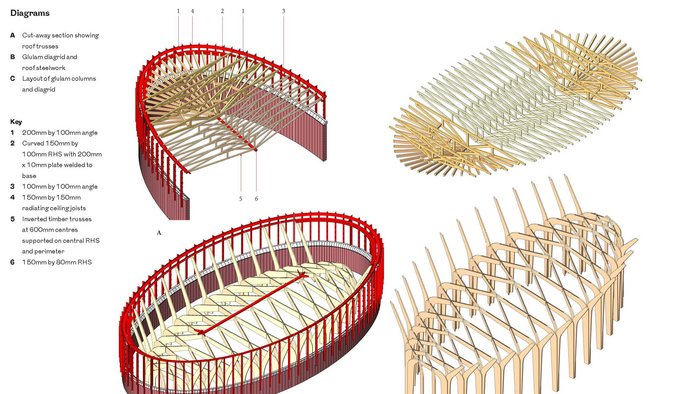