Cohousing is getting trendy. But what is it exactly? How does it work? And what’s in it for stakeholders and architects?

With only 19 completed projects describing themselves as cohousing in the UK, amounting to around 250 total units, it’s a housing model which has received a disproportionately large amount of coverage in British media over the past few years. Like any slightly alternative form of housing at the moment, it’s billed as a major potential solution to the housing crisis – meaning the affordability of housing crisis. True enough, according to the UK Cohousing Network, interest has spiralled. There are now an estimated 75 groups actively proceeding or searching for development opportunities across the country, in both rural and urban locations. Yet it is still quite a mystery how cohousing actually works. So what is it? Where has it come from? What examples are there? And how does it work from the perspective of architecture?

What is it?
A cohousing community is an intentional grouping of typically between eight and 40 households, created and run by its residents. Each household has a self-contained, personal and private home – and sometimes garden – but residents come together to manage and maintain their homes as part of a community with fixed boundaries and usually a common house in the centre of the site. The community regularly takes part in activities as a group and shares facilities and belongings. Activities may include meals, gardening and parties, while shared facilities could be central workshops or libraries as part of the common house, and car and bicycle pooling. Of the UK’s cohousing communities 17 were accommodated in existing buildings, sometimes with a new-build element. However, they are increasingly designed and built from scratch on a plot agreed by the group in order to facilitate wider objectives such as environmentally friendly living and safe outdoor communal play spaces for children.

The idea behind cohousing is, as Monica King from the Bridport Cohousing Group explains, ‘primarily about having a support and social network of people to live alongside’, yet other benefits can include being able to have smaller houses, as infrequently used areas such as guest bedrooms can be designed into the communal house instead, making the private houses more affordable. Many groups are intergenerational but some are welcome for people meeting specific criteria - such as Pollard Thomas Edwards Architects’ designs for St Luke’s in Muswell Hill and Featherstone Lodge for people entering the third age, and its OWCH scheme in High Barnet for older women. Unlike other similar schemes such as communes, residents do not necessarily have common interests or belief systems, and do not share assets or gain incomes from the community.

Born in Denmark
Although intentional communities have existed in various forms in the UK, cohousing proper is thought to originate from Denmark in the 1960s. A group of 50 families was inspired by the article ‘Children should have 100 parents’ by Bodil Graae to build a purpose-built cohousing community in Saettedammenn. Since then, governmental, legal and financial support and structures have enabled it to proliferate as a housing type there and in the Netherlands, with hundreds of communities already established and five percent of people in Denmark now living in cohousing. The US also has more than 130 sites and many others are in development around the world. The UK’s first cohousing community was developed in the 1980s by 20 public sector workers at Thundercliffe Grange, an 18th-century mansion in Rotherham. Recent high-profile developments in the UK include Springhill, Stroud, designed by Architype and completed in 2003, LILAC in Leeds by White Design, completed in 2013, and Lancaster Cohousing by EcoArc and Copper Lane, London, by Henley Halebrown Rorrison, both of which were completed in 2014.

‘The market has been woken up by K1 in Cambridge. We’re getting positive interest from councils, and a number of housebuilders are looking into it too’

Difference is good
‘Every cohousing project is different and that is part of the point,’ explains Meredith Bowles from Mole Architects, which is working on the Cambridge K1 and Oxford cohousing schemes. In the UK, with the exception of K1, cohousing communities emerge almost exclusively from grassroots organisations and groups of friends. So while the UK Cohousing Network now advises different frameworks, structures expand and formalise over time in many different ways and directions – not even decision-making arrangements are necessarily the same. Bridport Cohouisng, for example, has opted for a structure based on Dutch sociocracy which works through consent and looking for objections, while at Cannock Mill in Colchester decision-making is flat lined through consensus. Fundamentally, though, a group of residents buy a plot of land together and see to its financing, design, construction, management and membership. They may register as companies limited by guarantee, industrial and provident societies or community interest companies.

Nevertheless, as a process that relies on goodwill and voluntary time, seeing a cohousing group (which mostly lacks professional experience in construction) through to the end is a long process, with groups like Enlinca in Cambridge still yet to put down roots since being founded in 2000. The average process takes five to 12 years from start to finish. As a result the UK Cohousing Network is also encouraging councils, housebuilders and housing associations to start schemes of their own. ‘It’s a market which has been woken up by K1 in Cambridge,’ explains Jo Gooding from the UK Cohousing Network. ‘We are getting positive interest from councils including Sheffield, Newcastle and Plymouth, and a number of housebuilders are looking into it as a possibility too.’

Client and designer
Cohousing groups usually choose their architect jointly. Most have been commissioned for their locality, such as Barefoot Architecture for Bridport, or by personal connections, rather than by competition or tender. However, some architects including PTEa and White Design are becoming known for their experience in the sector. More unusually, Anne Thorne from Anne Thorne Architects was one of the original members of the group at Cannock Mill Cohousing in Colchester, and is drawing up the scheme.

With such a multi-headed client, which like Bridport may also include a housing association, designing a scheme that meets the needs of its residents is one of the most challenging aspects of cohousing. Yet for many groups this is also the most exciting part and the most established. Frequently the group has already drawn up an agreed wish-list before the architect gets involved. At Bridport, this was divided into luxury (eg freshwater swimming pool), desirable and essential (eg natural light). Architects then establish the design further through a collaborative process; organising a series of up to six workshops and then working with families to customise specific needs or fittings within each home as necessary after a house preference allocation ballot.

‘The variety of plans is kept to a minimum to keep costs down,’ explains Thorne. ‘It has been an interesting journey, encouraging people to understand the risks and take them.’ At LILAC, cohousing resident Paul Chatterton explains that ‘every workshop with White Design was followed by a group debrief’.

Meanwhile, at K1, design was decided not as a group but through meetings with selected committee members representing a particular workstream – for example, landscape, houses and communal house.

Nothing’s perfect
From all perspectives the underlying problem with cohousing is that it takes so long. ‘It’s like living on tectonic plates,’ explains King. Over time, members pull out, frustrated by the process or need to move on with their lives. What is particularly noticeable is the fact that it soaks up so much free time, leaving it an impossible impractibility for those who are time poor and perhaps also for those who would benefit the most – such as young families. Quite often it is led by retirees like King, who spends about four days a week on the project, financed by her pension. The repercussions and risk for architects and other construction professionals is cash flow, being paid in chunks for work or waiting until completion.

Gooding believes that many of these issues could be resolved with greater government participation – helping groups find land, or opening up financial resources and professional intermediaries. She feels existing efforts such as Right to Build, Self-build and Custom Housebuilding Act as well as the Community Rights and Localism Acts have been too bureaucratic, transient and meaningless without local level resourcing.

‘Finding a site and buying it was a lengthy business,’ explains architect and member Anne Thorne. ‘We were looking for a site within 90 miles of London. We asked local authorities and agents, but eventually found it through Rightmove.’

All the homes will be owner-occupied on 999-year leases on land owned by the cohousing group. The group obtained a loan through the Community Build fund which will be paid back when residents move in. Dwellings are designed to lifetime home standards and laid out in a beautiful landscape around the mill, which will become the communal house with kitchen, dining space, two guest bedrooms and library. 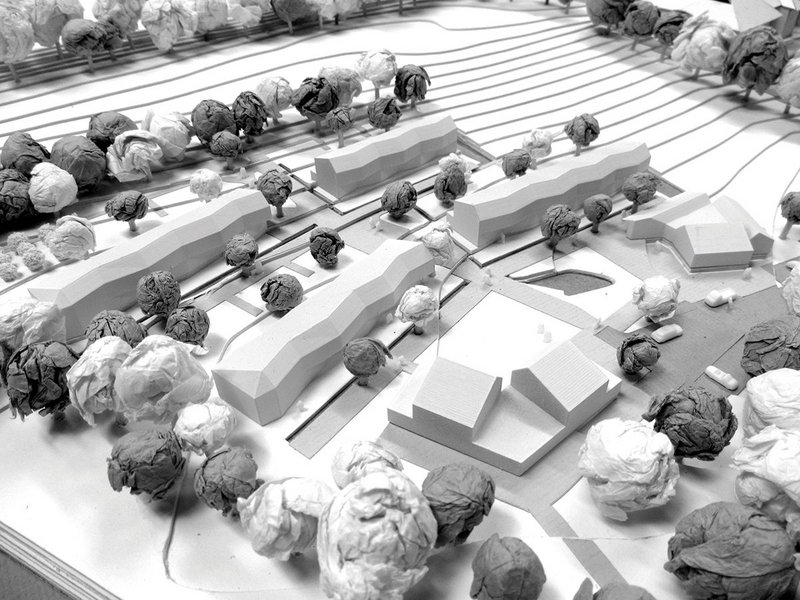 Bridport Cohousing. Arranged in the lower 0.8ha, the scheme is densely organised around water management.

Bridport Cohousing, West Dorset
Bridport Cohousing in West Dorset is a 34-unit scheme in an area of Outstanding Natural Beauty. At least 40 percent of the homes will be offered as shared ownership or affordable rents by a housing association, which is also funding most the build. The cohousing group has a purchase option on 1.8ha as a community land trust at an agreed price if planning permission is obtained. Barefoot Architecture was commissioned after one of the members went to a house designed by director Sam Goss for his father as part of an eco home open day. The design follows the contours of the land, with all buildings focused on the lower 0.8ha to protect views. The homes face south and are set in a cleverly managed watery landscape of swales and an amphitheatre that doubles as a sink in heavy rain. Residents put down a two percent deposit and if they pull out the money is returned to them once a new member joins. Owner-occupier homes will sell at 80 percent of market price, with the remaining 20 percent retained by Bridport Cohousing to ensure homes are not sold on the open market and remain affordable. 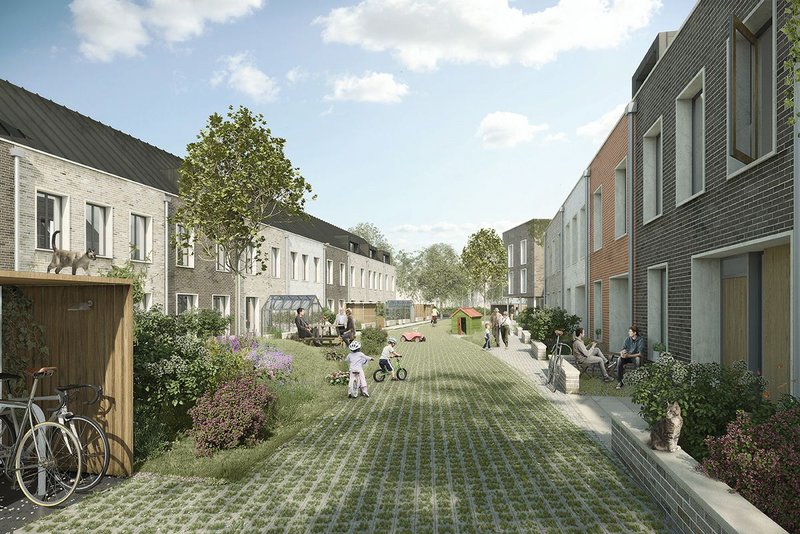 K1 Cohousing. Plot-based dwelling types are of uniform height with a further storey in a pitched or gabled attic where required. Credit: Darcstudio

K1 Cohousing, Cambridge
K1 Cohousing in Cambridge is a circa 40-unit, mixed tenure cohousing project designed to be near Passivhaus standards. It is the most unusual scheme under development in the UK. It was an initiative led by Cambridge City Council in 2010 for a plot of land in the north of the city after plans by a commercial housebuilder for it fell through. Cambridge City Council recruited professional advisers and consultants to help put together a client brief, held workshops and finally put its development out to tender. The tender was won by TownHus, a British-Swedish collaboration, which is now finalising and building the scheme.

Meredith Bowles from Mole Architects explains: ‘The group and council have employed professionals throughout the process. The loss of control is countered by the fact that the project will actually happen. But it has added a premium that works out about an extra £3,000 per home.’