As the Withdrawal Agreement milestone is reached, has it brought hope to the construction industry? It depends who you ask 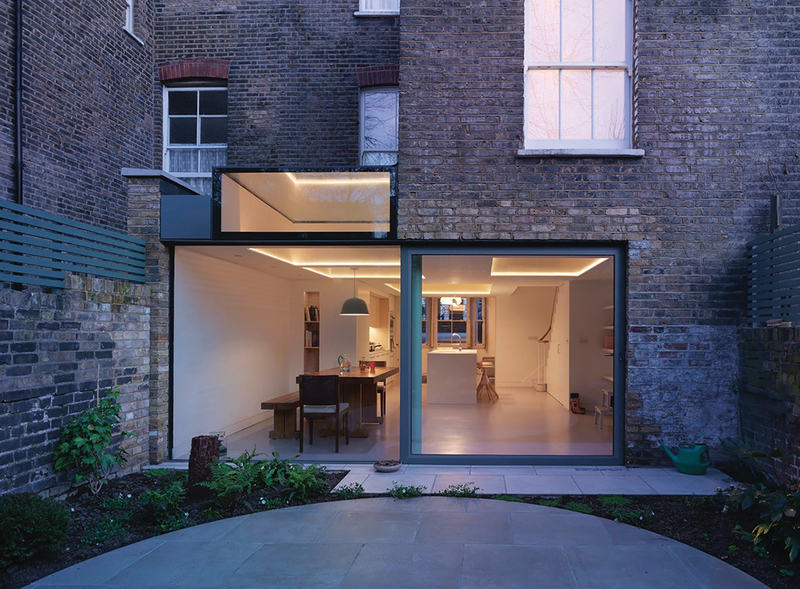 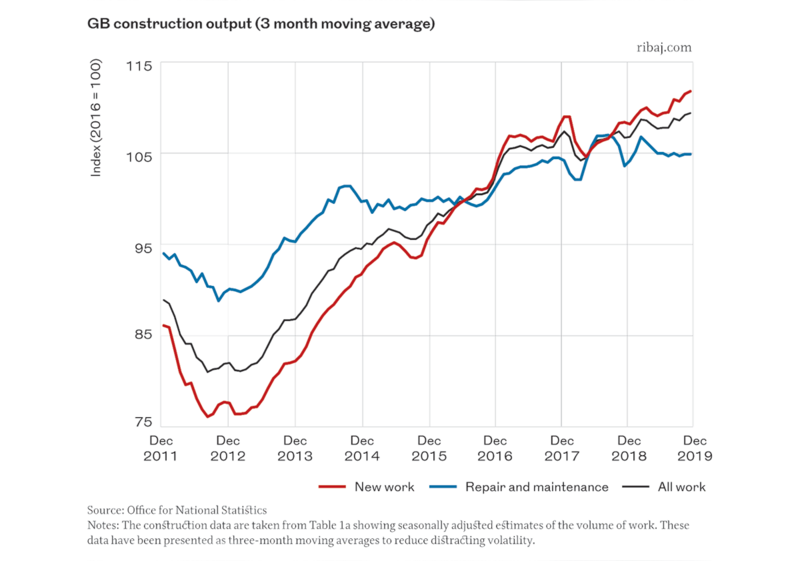 The Office for National Statistics figures surprised on the upside, bringing some relief to an industry which, like most of the economy, has been under a pall of gloom in recent years. The upbeat feel to the data certainly provided some reassurance that the industry has remained resilient after a sustained period of being bruised and bemused by confusion and uncertainty in the market.

Not that the economic woes have disappeared. The latest GDP data showed no growth in the final quarter of 2019 and growth for the year of 1.4%. This is well below the long-term average of 2.5% and, with the consensus among economic forecasters pointing to growth of just 1% this year, suggests the economy remains lacklustre.

For an industry as wide ranging and complex as construction, however, it is more often the detail rather than the headline figures that provide the most telling insights into the underlying performance, the direction of travel and the risks.

So, pulling the data apart a bit, we see in Chart 1 that the rise in workload comes mainly from new work. Growth in new work over the year was 3.4%. Meanwhile repair and maintenance work rose less than 1% thanks to a strong first few months. The trend appears to be downward and it would have been more sharply down if it were not for a bounce in spending on infrastructure and public sector repair and maintenance. 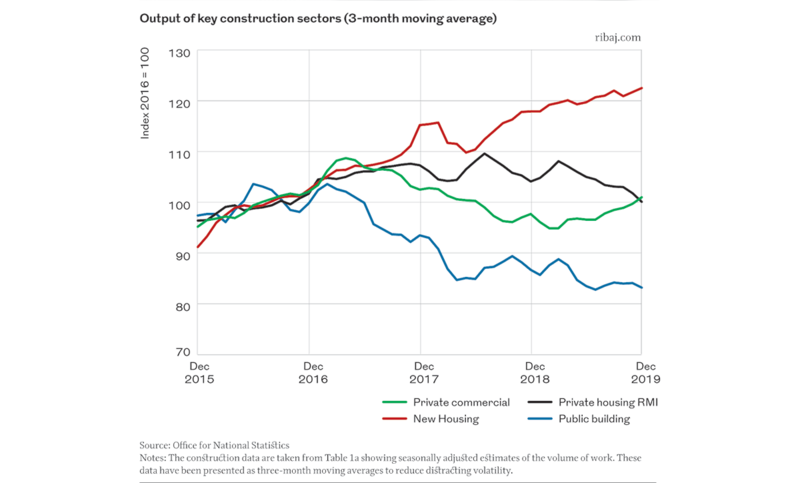 Focusing on four of the more important sectors for architects, Chart 2 reveals that new housing has been the major driver, with a 6% rise in the volume of work and a rise of 9% in cash terms. There was also a welcome sign of recovery in the once mighty commercial sector. Yes, output fell slightly year on year, but it gathered pace healthily in the second half of 2019.

Public new work continued to fall, though it accounts for a small share of total output. More worrying, especially for the more locally based smaller architects, is declining renovation, maintenance and improvement (RMI) work in private housing – down almost 2% in 2019 to its lowest level for three years. 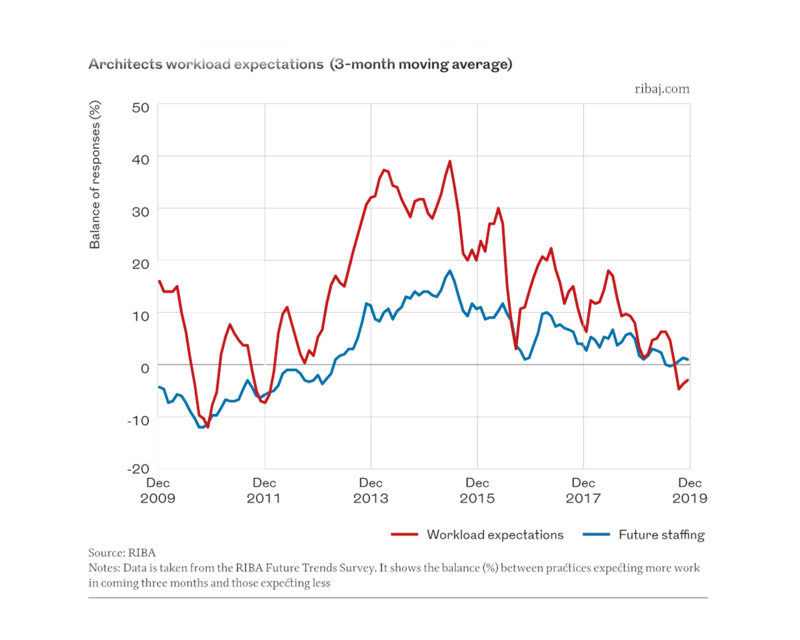 Turning to the RIBA Future Trends Survey, which tracks expectations of future workloads, the picture in Chart 3 is at best underwhelming. The expectation is for workloads to flatline or potentially fall in the coming three months.

This fits with Chart 2 which shows the two key sectors, new housing and housing RMI, going in different directions and public building and commercial work doing likewise. The net effect, broadly, is stability, but what that means for the future is less predictable. 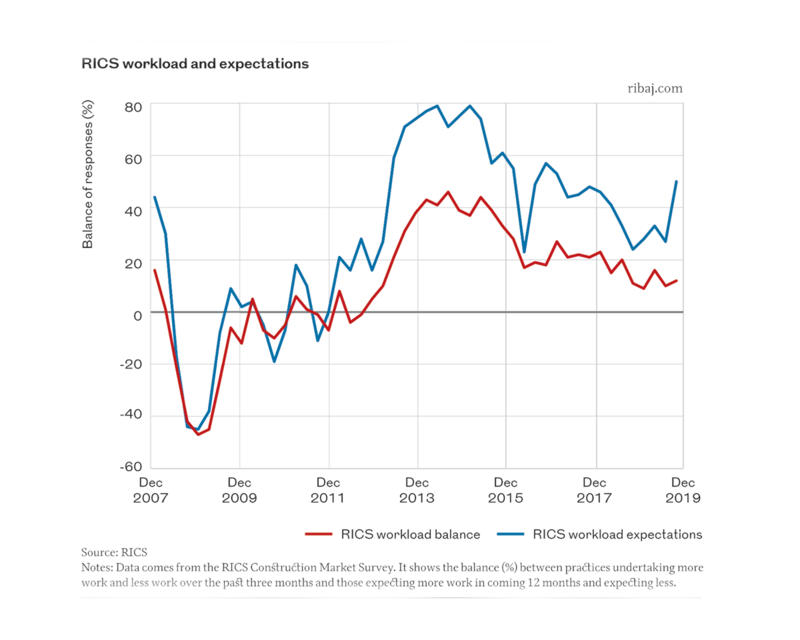 Depends who you ask

This more nuanced view of the industry’s performance, accounting for shifts in the workload mix, plays out in other industry surveys. And, as many of these surveys reflect sentiment, we can also observe how other changes, notably political changes, influence expectations in various industry sectors.

For instance, some industry surveys are likely to be buoyed by the expectation that confidence among clients will return strongly with the Brexit deal done and a large majority in Parliament. Importantly, this won’t be seen in the latest ONS figures, which are based on actual work done rather than sentiment. Any uplift in output that might follow the election result will take time to flow through to work on the ground.

We see strong evidence of a shift in sentiment in the RICS construction and infrastructure survey (Chart 4). This shows a spike in expectations in the final quarter and the comments suggest that the General Election result is seen as having reduced uncertainty and lifted confidence. The rise in expectation, however, is not matched by work on the ground among surveyors. The workload measure over the past two quarters suggests lower growth ahead than a year ago.

It is important to note that the RICS survey tends to be an indicator of future workloads in construction, as the respondents are mostly engaged early in the processes. 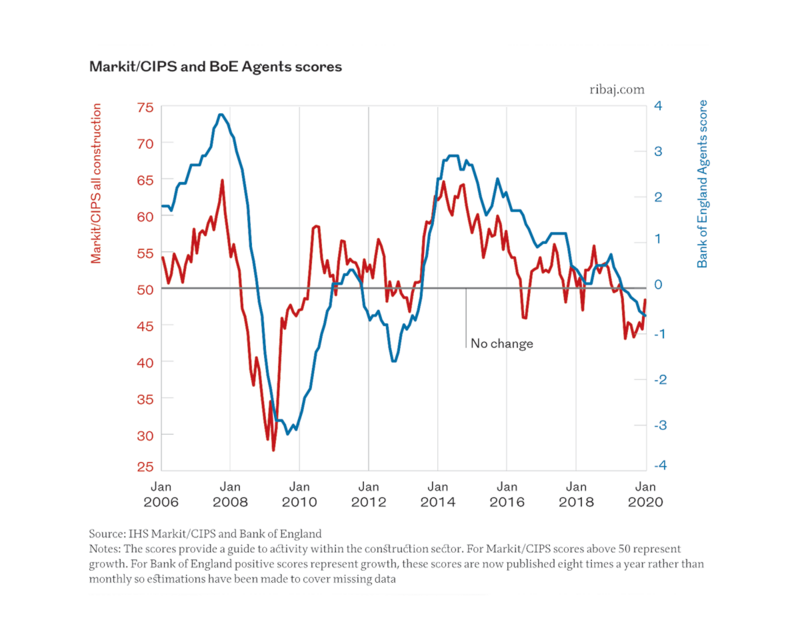 We get a much more subdued view of the past few months from both the Bank of England Agents and IHS Markit/CIPS surveys (Chart 5). Both point to a decline in workload in the final quarter, although the Markit survey results were less downbeat for January. These surveys are more wide ranging and possibly more representative of the broader construction sector than the RICS survey.

The Federation of Master Builders' survey of smaller local builders (see Chart 6) provides another take on the changing mix of construction. The decline in the private housing repairs, maintenance and improvement (RMI), a staple of the small builder, might suggest falling workloads. However, the finer data in the survey shows that while housing work has slipped, local builders have filled the gap with rising levels of both public and private non-residential work. This appears to have maintained slight growth in overall work. 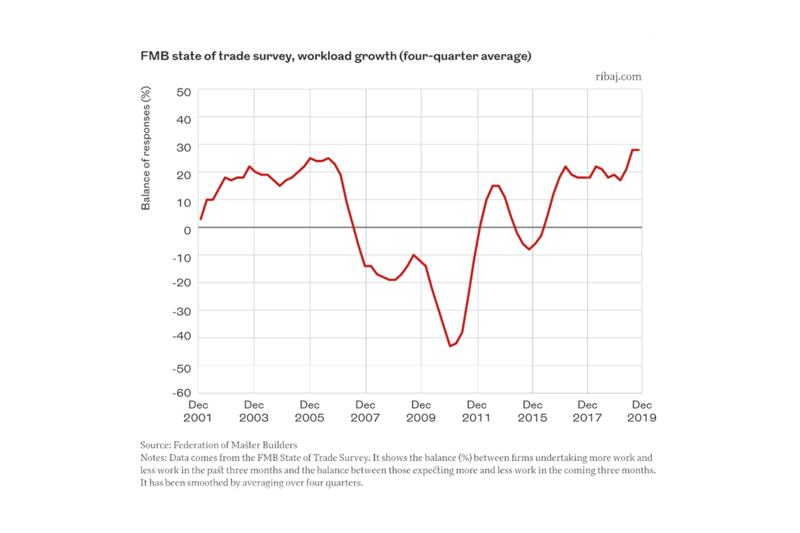 A key message from the ONS data and industry surveys is that while the figures may suggest an upbeat industry, there remain winners and losers, the confident and the fearful. The mix of work, and how it changes, matters.

Holding onto that theme, one huge shift in the workload mix in recent years and its implications deserve greater attention.

Over the past 10 years the mix that makes up new construction work, the lion’s share of total output, has changed massively. The private commercial sector has dwindled from about 40% to just over a quarter today. The gap has been filled by expansion in new housing and infrastructure. These two sectors now account for 60% of all new construction work.

Importantly, along with this shift in mix of work has come a more fundamental change. Government may always have had a big say in infrastructure investment and spending on public building, but a decade ago its influence elsewhere on new construction workloads was limited. The economy was the major determinant of the sector’s growth or recession. It drove commercial, private residential and industrial building activity.

Today, however, government policy has a far bigger influence. With the introduction of the Help to Buy scheme, government policy now arguably has more impact on the prospects of the private house building sector than the ebbs and flows of the economy. So it now heavily determines the future of three sectors which between them account for about 70% of all new construction work – infrastructure, public building and house building.

This seems to put the industry into territory it has not visited for more than half a century.