In an ever-changing world, the profession is turning to its business skills to widen earning potential. It’s paying off

Is entrepreneurism the new panacea in architecture? The cure-all remedy for all current architectural complaints: decreasing fees, more work for less money and other professionals encroaching on our space. Certainly, the notion that a vigorous start-up mentality could provide a much-needed antidote to present ills is gaining ground.  In the summer of 2014, German architect-developer Tobias Maescher launched the online magazine Archipreneur, exploring the intersection between architecture and entrepreneurship; the same year, the ‘Archi-Preneurs’ Guerrilla Tactics conference, under creative director Will Hunter, took place in November 2014 at the RIBA in London, providing ‘Smart Strategies for Small Practices’.  In 2015, Eric Reinholdt used the direct experience of starting his own studio – 30x40 Design Workshop in Maine, New England – to bring out two successful Architect+Entrepreneur volumes, which combine a first-person narrative with practical tips on setting up your own practice, brand building, marketing and strategy. In July this year, French architect Odile Decq – founder of the Confluence Institute for Innovation and Creative Strategies in Architecture in Lyon – when lecturing in London, put out a clear and widely reported call for entrepreneurial skills to be taught in architecture schools since graduates can no longer count on an entry level job in a firm.

From owner to entrepreneur

So what separates the practice owner from the architect-entrepreneur? Certainly, the Oxford English Dictionary’s baseline definition could fit any practice owner: ‘A person who sets up a business or businesses, taking on financial risk in the hope of profit.’ The deep-seated desire to lead your own practice is strong among architects.  Though running a practice always entails a level of financial risk, particularly in periods of economic uncertainty, practitioners tend to prioritise design output. Architecture firms gain recognition for the quality of their built designs, not the management of their bottom line.

What we perhaps forget is what game changers the UK’s high-tech practices – such as those of Farrell, Foster, Grimshaw, Hopkins and Rogers – were in the 1960s, with their ‘deep commitment to marketing and the financial side of the business’ says Terry Farrell. That approach perhaps goes some way to explaining their phenomenal success and longevity. Farrell explains: ‘Two linked ­factors underpinned the success of these practices. First, we enthusiastically embraced the private sector, and made a complete break from the then current generation of leading practices that were almost solely reliant on the state and related cultures of the post-war Welfare State era. This influenced not only the kind of clients and projects we all undertook (warehouses, factories, offices, private houses and developer’s housing), but also our approach to internal organisation, marketing, publicity and so forth. Secondly, the link to construction and the design of building components was also part of this new attitude. Cladding, mechanical engineering, structural-steel systems and off-site component fabrication and part assembly got all of us into the industrial design of building elements and thoroughly engaged in doing so with the private sector construction industry. And so design became paramount.’

So how does the approach of today’s architect-entrepreneur differ from that of some of the premier commercial design practices? For Reinholdt it comes down to mindset: ‘The architect-entrepreneur differs from a practice owner in the way each approaches their formative business model and in their willingness to explore a diversity of revenue streams,’ he says. When he set up his own studio in a remote area of Maine, he knew he could not rely on a local client base and the typical standard architect services business model in which design consultancy is provided for fees. Heavily influenced by start-up thinking he turned to the internet to widen his customer base and diversify his business models and revenue lines. He cites Eric Ries’ The Lean Start Up and Tim Ferris’ The 4-Hour Workweek as influences – and describes how he rigorously applied Ries’ Minimum Viable Product (MVP) methodology, in which a minimum viable product is launched so that an iterative process of measuring and learning can happen at the earliest stage possible. This has led to successes and failures and a business model that ‘sells digital and physical products, earns advertising revenue and secures affiliate commissions from a variety of sources’.

To some extent, Reinholdt’s experience of setting up a practice has become the product itself through the books he has written and vlogging on YouTube. When at the end of last year, he set out to build a new home for his studio, its construction became a ‘physical avatar for my business and design principles’. By videoing the process step by step, he built up a following of over 10,000 loyal subscribers and funded the whole construction through passive income generated by the products, advertising and affiliate revenue. Like other purpose-built architect’s studios, it is intended to showcase the design and technical capabilities of the practice, but the facilities reflect the diversified business model of the architect-entrepreneur. It houses a video suite, and is a place to show clients materials and to run workshops. Now that it is complete and photographed, he has worked up the details into plan sets to be sold online. As he says, nothing gets ‘underused in my practice’. He describes the studio ‘as a chassis upon which a series of income-earning products are positioned

A means to an end

If Reinholdt’s approach epitomises that of the millennial start up, then the most outstandingly successful examples of architect-entrepreneurs to date are perhaps the designers and initiators of the London Eye, David Marks and Julia Barfield of Marks Barfield Architects. They famously came away with millions when they sold their one-third stake in the Eye in 2006 to the Tussauds Group. Their entrepreneurial activities were, however, triggered by the more conventional route taken by architects winning work – a design competition. They entered a giant ferris wheel for a landmark project for the millennium, but when it became apparent that the wheel would never be realised, they set about initiating the project themselves. Providing the keynote at the 2016 RIBA Guerrilla Tactics conference, ‘Super Models: business models with the power to transform practice’, Marks described how the practice has accrued business knowledge over time – the basic building block being the business plan for individual projects and the practice. In terms of taking on the responsibility of the business side of a project, it is a matter of expanding architects’ skills at problem-solving and co-ordination to take on more reports and expert consultants to cover marketing and financing. It is nothing to be scared of in terms of services, but does require a lot of legal advice and the capacity to scrutinise hundreds of contracts. Rather than using the sale of their share in the London Eye and to buy a chateau in the south of France, Marks Barfield has continued investing in projects it wants as a practice to undertake. Most conspicuously it invested £6 million towards the financing of the BAi360 observation tower in Brighton, which opened in August 2016.

Carl Turner, also a speaker at 2016 Guerrilla Tactics, is another who has used entrepreneurialism to simultaneously develop his practice and pursue projects. Marks calls this a ‘triple bottom line’ for having three-fold benefits – environmental, social and financial. Turner has a particular interest in brownfield solutions, housing and social responsibility, and the issues created by the  displacement of communities through regeneration. His foray into the use of shipping containers started with Hackney City Farm in 2011, a pro-bono project in which he was given an £8,000 grant to create a studio for Magnificent Revolution, a charity teaching children about energy use with bike-powered generators. When he won a competition to revitalise the site of a temporary ice rink, organised by Lambeth Council in collaboration with Brixton Market Traders’ Federation, he notched up his use of shipping containers to an urban scale. Opened in 2015, Pop Brixton is ‘a little city’ of recycled shipping containers accommodating an event venue and independent retailers, restaurants, street-food start-ups and social enterprises. The skills Turner has developed through this process have led to feasibility studies and paid consultancy work for social enterprises. At the end of 2015, he also won the competition to convert Peckham Levels, a multi-storey car park, in south London into a community project. This time around, though, he has offered the council a 20 per cent cut rather than the 50 per cent that he received at Pop Brixton. More importantly, perhaps for Turner these projects have transformed his practice and shifted him up the ladder in terms of building types. Within five years, he had gone from a tiny pro-bono project to mixed-used developments and a significant commission to design Mountview Academy of Theatre Arts, a new school of performing arts in Peckham.

What is at stake?

With the shift from a knowledge to a digital-based economy, the problem-solving skills of architects are increasingly valuable to wider industry. These, as outlined by Rob Hyde, principal lecturer at the Manchester School of Architecture, encompass: the appraisal and communication of complex, non-linear ideas to diverse stakeholders; the ability to digest and analyse a large amount of data; speculation and scenario-testing; and strategic and design-thinking that leads to innovative digital and material solutions. Hyde describes how this has led Part I and Part II graduates to be attracted to the periphery of property and construction, working for clients, developers, contractors, house-builders and engineering and project managed multi-disciplinary firms in both traditional and diverse roles, where they are paid more than in traditional practices. They also increasingly go beyond this into manufacturing and digital/creative industries (where they are likely to be paid even more). This provides further food for thought for conventional practices, which Hyde anticipates needs ‘to be adapting and looking at new ways of doing things to be able to compete for talent in future – perhaps looking at how other working cultures and industries operate and get paid, ie lean thinking from manufacturing, agile thinking from digital/tech industry, ability to productise etc’. Just as in the 1960s, Farrell and his contemporaries successfully revitalised architectural practice through their emphasis on business and new building systems, it seems that, in order not to lose ground to adjacent professionals and industries, a new wave of practitioners needs to be fully primed to embrace current entrepreneurial thinking and the possibilities of new digital and manufacturing technologies.

Helen Castle is head of professional programmes at the RIBA and consultant editor of Architectural Design (AD). With thanks to Rob Hyde with the help of Tom Jeffries and John Hickey at the Manchester School of Architecture 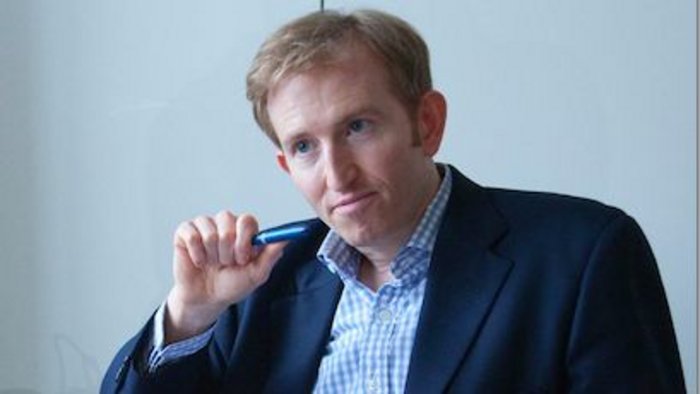 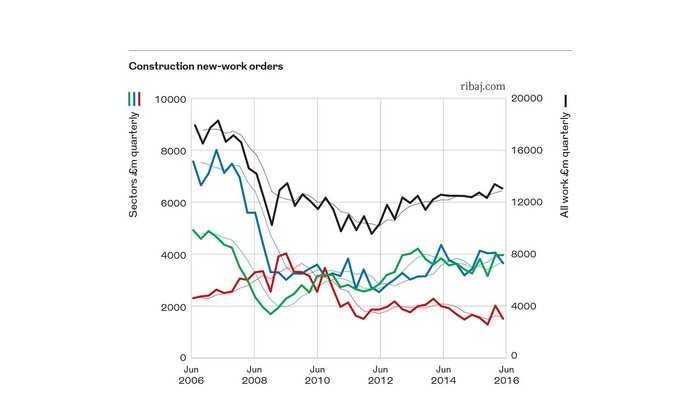