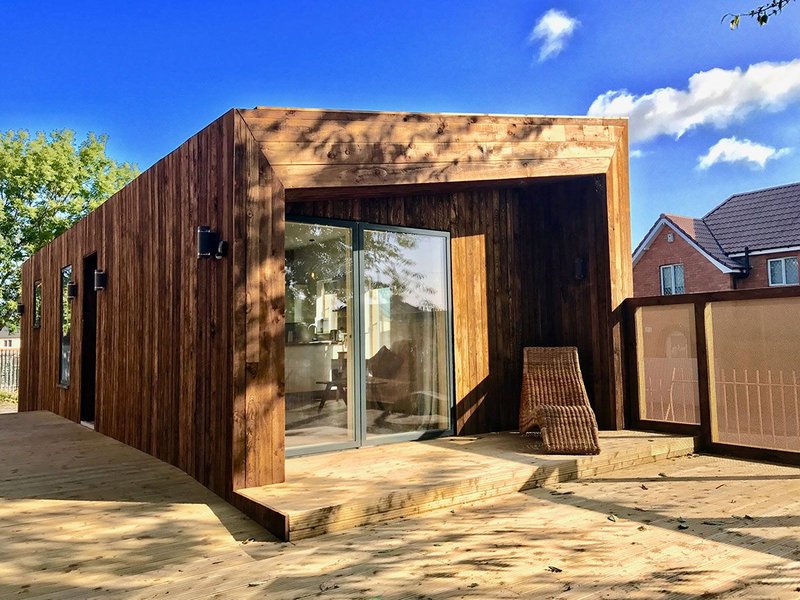 The timber-clad TAM could be parked in the back gardens of Knowle West. Credit: White Design

Since the Urban Task Force was set up in 1998 we have had years of focus on densifying urban areas on brownfield sites. But  there is another extensive source of land: back gardens. We are not talking about the long narrow strips behind city terraces, but the generous 70ft ones behind and around the council housing of the interwar years. This fabled period of house building extended the edges of cities across the UK into a green, garden city suburbia of 25 homes per hectare. There are an estimated 2.75 million of these council houses across the UK.

Architect Craig White of White Design, one-time RIBAJ columnist and tireless innovator, has been trying to untie the knotty problems of increasing building density in one such area, Knowle West, a 1930s council estate of 5,000 houses on the southern edge of Bristol. White, operating as We Can Make with his University of the West of England studio Live Work Make, and partnered with arts-led Knowle West Media Centre, has had many hurdles to get over: planning, land ownership, finance, efficient build.

But it is worth persisting because mapping exercises have shown that it has the potential to deliver 1,500 new homes in gaps and corners, and 500 in back gardens – and this is just one of five such estates in Bristol. Compared with demolition and densification, which has been proposed on similar sites, the social benefit of White’s approach is obvious and it has been set up to be initiated by residents.

We Can Make has come up with a novel Airbnb experiment to show how the proposition adds up. Parked round the side of Knowle West’s Filwood community centre is a well appointed one-bed prefab on wheels, which they’ve dubbed a TAM. This structure is cosily sustainable (designed to Passivhaus standards) and decked out with locally inspired art work; you can book it for a weekend or a night to try it out and imagine it in your back garden. Knowle West residents can do this for free and more than 100 have taken up the offer so far.

‘Citizen housing’ is what Melissa Mean of Knowle West Media Centre calls this. The media centre has been at the heart of investigating and engaging with the proposal: We Can Make conversation starters have included touring the estate with a bubble machine. On the estate of three-bedroom homes, 54% of people are living either alone or in couples but have nowhere smaller to move to locally. We Can Make has found residents wanting to downsize but not leave the area, one living alone and struggling with rent because of the bedroom tax; a single mother camping at her parents without the money for independent living nearby; and a grandmother hosting emergency bed spaces for her wider family who have nowhere to settle locally. Put this need for more flexibility together with the nationwide shortage of genuinely affordable homes, and a Knowle West resident might consider trading a garden for extra or more suitable space. In fact 80 have expressed an interest so far and 46 of these sites are undergoing feasibility studies.

Straightforward extensions or garden rooms might be the answer for private home owners, who account for around 50% of the homes thanks to right to buy. But remarkably, We Can Make research has shown that planning applications from Knowle West are twice as likely to be turned down as those in Bristol’s more affluent Clifton, a conservation area. And then there is the cost, and the problems of raising money as individuals.

‘How can the community pull the levers?’ asks White. Convincing the city authorities and owners of the remaining 50% of tenanted houses has been one prong. Bristol mayor Marvin Rees has spent a night here in the TAM, as has the city’s head of housing. The caravanette, built without planning permission (but with licence), has hosted workshops for planners. Working with them, with grant funding from Power to Change and the Nationwide Foundation, White Design is creating a design code covering the look and feel, form, parking issues etc to smooth the route to planning permission for up to 350 units (the number estimated as realistic to produce at 50 a year over seven years). Alongside are negotiations are under way on leasing the land from council and state by a dispersed community land trust.

Then there is paying for it. Once the land trust has leases it should be able to raise money against them, which would also allow investment (the Triados Bank is currently running the financial models to check it all stacks up). But the form of the new houses also makes a difference to individual borrowing. If they are on wheels they are classed as recoverable capital, unlike houses, and can be lease financed. This has less demanding financial tests than raising a mortgage. White is alive to other sources of funding too – currently with the city council is a £4m bid for a programme of deep retrofits for the 30s houses using TAMs as a decant option.

So what would Knowle West look like if this took off? Probably very similar but a bit busier. The extra homes would be mainly in back gardens to a small number of designs. There is White Design with its woody TAM, Barefoot Architects working with a foam glass panel system from Tufeco and designs from Barton Wilmore and Bews Mews. The estate might also look a little more prosperous as all these buildings are highly insulated and triple glazed so won’t require much to heat, a pertinent consideration when 39% of Knowle West residents live in fuel poverty. There might also be a few extra local jobs: it’s proposed that the units are batch manufactured on the estate. White has some experience in this, having set up Modcell to systemise straw building. This manufacturing capability is one of the metrics that fed into the target of 350 units, figure that will be written into the design code now being consulted on - which should be adopted as supplementary planning guidance in the local authority plan.

We Can Make has won itself a place on innovation promoter Nesta’s New Radicals 2018 list and its proposals could spread beyond Bristol. White is taking them to Manchester’s head of housing and Cherwell District Council in Oxfordshire for its custom build pathfinder scheme at Graven Hill. And in coastal Devon, Teignbridge District Council has commissioned a pilot study over three sites to see how the TAM and its peculiar status could help with options for an ageing population, for key workers homes and maybe for seasonal demand from tourism. Hopefully these ideas will also become reality for both current and future residents of Knowle West.