There is another way: 21st century architectural pupilage already exists 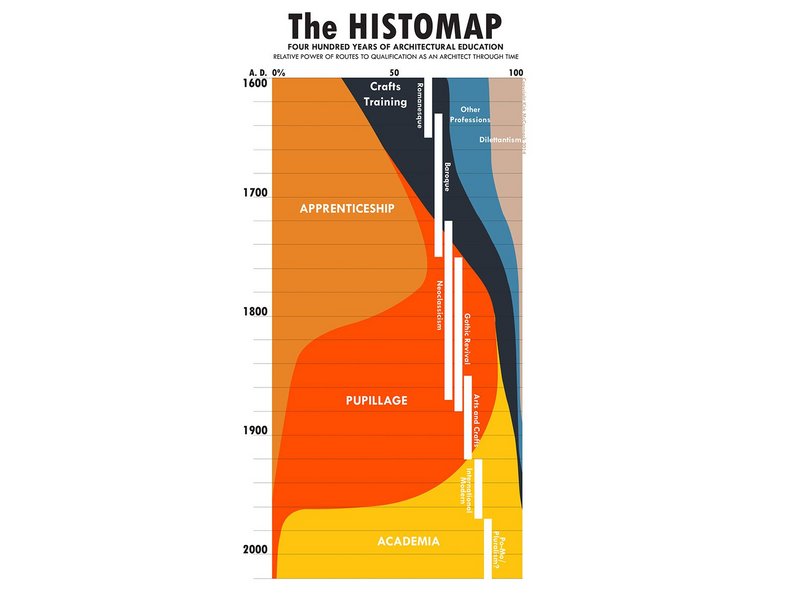 Four hundred years of architectural education: relative power of route to qualification as an architect from 1600. Credit: Kirk McCormack

There is a heated debate surrounding architectural education at the moment. Reforms have been proposed which some have suggested may be a catalyst for the most significant change in our training system since the middle of the last century. It is in this context that a number of my colleagues and I recently concluded our own studies. However, the route we followed was unorthodox.

The programme we enrolled in is known as the RIBA Examination in Architecture for Office-Based Candidates, otherwise known as the Office-Based Examination, or the OBE for short. Few people are aware of this route to qualification, even though it has had a significant role historically. It is not a taught course. Rather, ‘candidates’ remain in full time employment and use an in-office mentor and independent tutor to guide them. Learning outcomes and final awards are equivalent to those of full-time courses and the curriculum is mapped against typical Arb and RIBA criteria.

Founded in 1863 as the ‘RIBA Examination in Architecture’ the course established its current format in 1988, and it has been franchised to Oxford Brookes University since 2002. Its distinguishing features include: critiques which take place in the university – candidates can travel there up to eight times a year; preparation for written examinations and presentations is done remotely; and design is learned through direct practical experience.

The programme attracts a varied range of individuals. Some enter at Part 1 from cognate disciplines such as architectural technology or interior architecture. Others enter at Part 2 to complete their studies after hiatus from the full-time route. A number of my peers had worked their way up to directorial level within practices when they entered the programme. Coursework is self-directed and timescales are flexible but if starting from Part 1 then the typical completion period is comparable to full-time courses at about six years.

Candidates also come from a wide geographical region. Anyone working under the supervision of an architect registered in the European Economic Area can enter. I travelled from Dublin for crits and others I know came from as far afield as Rome. In this regard, the OBE could be compared to a distance learning course but a better description may be that it is a form of modern apprenticeship, or modern pupilage.

The traditional concept of pupilage (on-the-job training, paid for by the pupil, sometimes supported by classes and travel) is integral to the history of architectural training. It also has a close association with the first RIBA Examinations in Architecture, which it supplemented, over 150 years ago. To a certain extent, the OBE is the successor to that pupilage and to those examinations.

Those examinations would later become known as the External Examinations and formed the backbone of qualifications right up to the middle of the 20th century. In 1957, for example, nearly half the profession qualified via RIBA External Examinations. There are also tales of British and Commonwealth POW’s during the Second World War taking the Examinations remotely by posting scripts across battle lines with help from the Red Cross. However, for an extended period there was a concerted effort to shift architecture solely into higher educational institutions and this route was specifically targeted as being retrograde and contrary to modernist ideals.

The OBE accounts for some 0.5 per cent of the cohort per year, which makes it the only real alternative route to qualification available

Between the 1920s and 1960s, commentators voiced dissatisfaction with the entry requirements for all routes into the profession. The 1958 Oxford Conference on architectural education was a watershed event at which it was agreed that standards needed to be raised to match other professions, such as law and medicine. This spawned the ubiquitous degree system we now have.

The magnitude of the shift in architectural training at that point cannot be overestimated. The histogram graphic presented here shows the relative dominance of the main routes to qualification through the centuries and up to that time, including the acute angle of change. Today, 95 per cent of graduates come from the full-time university route with about 4.5 per cent qualifying via part-time courses. The OBE accounts for some 0.5 per cent of the cohort per year, which makes it the only real alternative route to qualification available.

Recently however, as one of the strands of the debate, there has been a re-evaluation of workplace learning. Peter Buchanan, as a part of a series of articles in the Architectural Review, has suggested that architecture students learn most not from university studio or critique situations but from watching an experienced designer unravelling and resolving a problem at the board. He contends that ‘pupilage once offered this essentially intimate experience’. Will Hunter has gone a step further by actually founding a new London School of Architecture (the LSA), which proposes to establish a network of ‘host practices’ that will provide salaried placements to students and assign a mentor to be the point of contact between the school and the student. Design will be taught through participation in real projects.

Aside from the problems identified by the current review, the circumstance that makes us most need to drastically reconsider the delivery of architectural education is the advancement of technology in the last 15 years. The premise of an academy (the university) was founded on the principle of providing access to information (along with a sheltered learning environment). Until only recently, this meant knowledge contained in printed media in libraries, or knowledge conveyed through expert instruction – that is, lecturing. The growing online data trove that now exists may mean this model is moving toward obsolescence, an idea highlighted by the news that Google has completed the digitization of over a quarter of all books ever written. Equally indicative of this trend are figures recently unveiled by YouTube which revealed that, on average, its users upload more videos over the course of 60 days than the three main US television networks have produced in the last 60 years. With this in mind, it becomes reasonable to suggest that the future of architectural education (and, in fact, of all education), is likely to be more dispersed, networked, and self-guided.

My own experience of the RIBA Office-Based Examination suggests that the concept of pupilage and workplace learning is a very viable route to qualification and should be included in, if not the focus of, the current debate. At the moment no genuine alternatives to the dominant university route have been discussed in the official review. I do not suggest that the academy be eliminated from education, but its role in the delivery of architectural education needs to be reassessed and perhaps made only one part of a much richer system.

Kirk McCormack graduated from the RIBA Office-Based Examination in Architecture with Distinction and was awarded the Student Prize for Exceptional Performance at Part 2. He lives and works in Dublin city centre.