Are changing office styles and increased scrutiny of embodied carbon driving the use of ever longer single spans? Typical steel spans in the latest British Council for Offices Guide to Specification now go up to 15m, reflecting this sector’s increasing appetite for longer spans and flexibility of space.

Designers are constantly pushing the envelope to achieve longer and longer spans to create column-free space, according to Neil Pennell, chairman of the BCO’s technical committee and head of sustainability & engineering at developer Land Securities.

While this has long been the case for finan­cial services, it is becoming increasingly popular in other types of workplace.

‘Now the technology and creative sectors are also valuing long span column-free spaces that promote collaborative working and are easy to reconfigure and brand with their own identity,’ he says.

‘People like to have the freedom to space plan with as much flexibility as possible to incorporate different workplace settings, with a particular emphasis on collaborative spaces.’

‘What your building is used for now might be very different in 10 years time,’ says BCSA marketing and technical development manager Chris Dolling.

‘Almost every sector can benefit from the greater potential for adaptation that long-spans provide.

‘Where you may have had smaller grids of 6m or 9m in the past, now we’re finding that 15-16m spans are a regular thing, particularly with cellular beams, where you can compress your services into the structural zone.’

This trend is not confined to offices. Leisure buildings have always had to prioritise long spans and there are signs that these are becoming increasingly desirable in the education sector too, as clients seek to build assets rather than future white elephants. In Liverpool, for example, the city council has commissioned four new schools, all designed with long clear spans to allow scope for alternative uses in the event the buildings ever lose their educational function.

BDP’s St John Bosco Arts College, for example, was designed like a giant shed with roof trusses spanning 50m and a removable internal configuration.
‘The framing solution to this building is fundamental to the longevity and flexibility,’ says the project’s structural engineer, Danny Sinclair, who is an associate partner at The Alan Johnston Partnership.

He has also seen an increase in longer spans in student housing projects. ‘Some of my clients with long term investment in the development will not allow cellular loadbearing construction because it’s a short term snapshot of a building use,’ he says.

‘We did look at internal columns but opted to go with longer spans for future flexibility and to reduce foundation costs,’ says PBA equity director Fergal Kelly, who specialises in higher education projects.

He has noticed that exposed steel structures are increasingly acceptable, and that requires more attention to the aesthetics of the steel structure and connections.

Flexibility of space is also likely to rise up the agenda in tandem with the greater focus on embodied carbon as buildings must become more efficient to run.

‘We should either be designing for disassembly or for longevity and flexibility so that you can repurpose a building. For this, long spans give more options,’ says BCO’s Neil Pennell. ‘And while it costs more to have longer spans, this is often a premium worth paying to create better quality space.’

In deciding the best structural solution for larger spans, engineers need to juggle weight, fabrication costs and vibration issues as well as achieving the maximum number of lettable floors at the desired floor-to-ceiling height.

‘Longer spans need deeper structural zones, so the further you go with your span, the more space will be taken up out of the
total building height by structure – leaving less for usable floors,’ says Michael Heywood of Arup, senior engineer of the new Monument Building in the City of London.

‘Thus there is often a balance to be struck between flexibility of internal space planning (fewer columns and longer beam spans) versus more lettable floors with shallower structural zones (more columns and shorter beam spans).’ In the Monument Building, 12m cellular beams minimise the structural zone.
So at what point do single flat beam spans stop being feasible? According to BCSA’s Dolling, trusses generally become economic for spans of more than 25m when the stiffening required for steel beams makes lighter truss constructions more practical.

‘It’s a balance of materials and man­power costs. The point where beams and trusses cross over tends to be from 20-25m,’ he says, adding that the shorter the span, the less cost-effective the truss because of the increased cost of fabrication.

Fergal Kelly of PBA agrees. ‘Conventional wisdom is to look at trusses rather than beams when you’re going beyond the 15-18m mark for floors and 20m for roofs.

‘In terms of fabrication cost, that tends to work out cheaper,’ he says.

Cost comparisons aren’t always straightforward, however. As The Alan Johnston Partnership’s Sinclair points out, longer spans can lead to reduced foundation numbers, as at St John Bosco school, the savings offsetting the larger cost of the superstructure.

However, deep floor plates with no internal atriums, where some occupants are further from natural daylight, may also have implications for air-conditioning and lighting and so influence whole-life running costs and overall carbon impact. Installation and transportation must also be factored in.

‘A 50m steelwork truss can be transported in multiple sections and spliced together on site. Delivering long span members in alternative materials or continuous rolled sections can become a major operation in itself.’

Longer spans can also be an advantage in controlling vibration issues that can occur in common office grids such as 9m by 9m.

‘When spans get longer there’s enough mass to keep vibration within limits,’ Kelly points out. And while there is a cost premium for longer spans, increasingly clients seem willing to pay it.

‘The cost of the frame is a pretty small proportion of the final building cost,’ says BCSA’s Dolling. ‘In effect, you’re giving your client long-term flexibility forever, for a fairly small extra cost.’

Parallel Beam  Effective for spans of up to around 14m. Consists of floor grids with two layers of fully continuous beams running in orthogonal directions.

Composite Beams with Web Openings (below)  Suitable for spans of 10-16m with openings to allow services to pass through the beam. Includes cellular beams, formed by splitting two rolled sections longitudinally  to form two T sections.

Tapered Girders (above)  Suitable for 10-20m spans. The depth of the girder increases mid-span with scope to hang services under the shallower regions.

Stub Girders  Vierendeel truss with a shallow open section forming the bottom chord, on which sit short lengths of deeper I sections. The top chord is formed by the composite slab. Gives spans of more than 20m.

Haunched Composite Beams  Haunches at the ends of the beam mean that the rest of the span can be shallower, with services passing underneath. Can span more than 20m.

Composite Trusses  These use the concrete slab as the upper chord in the final state and can achieve spans of more than 20m. Services can pass through the gaps between the truss members.

Trusses (roofs) and lattice girders (floors)  Triangular or rectangular assemblies of tension and compression elements formed by bolting or welding
standard sections together and with bracing in a W or N form. This system is capable of achieving spans of up to 80m.

Space Frame  This option requires the assembly of small structural components in tension and compression. These are connected at preformed nodes and by inclined bracing.

In association with Tata Steel & BCSA 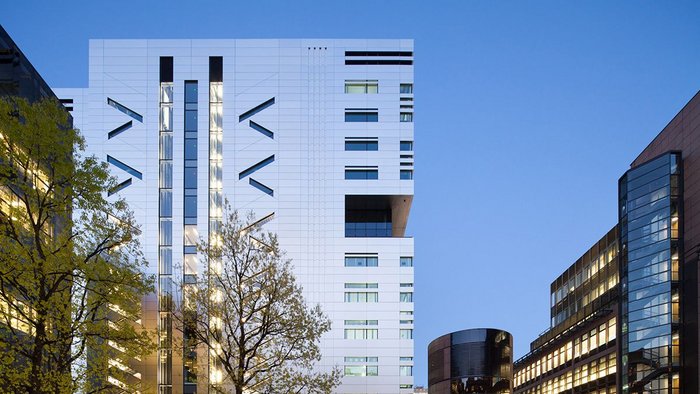 In association with Steel for Life & Tata

Making it big in the City 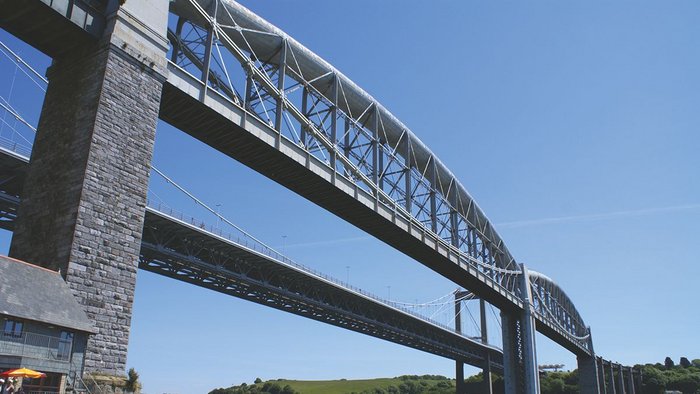 In association with Steel for Life & Tata