How many architects are there in the UK? 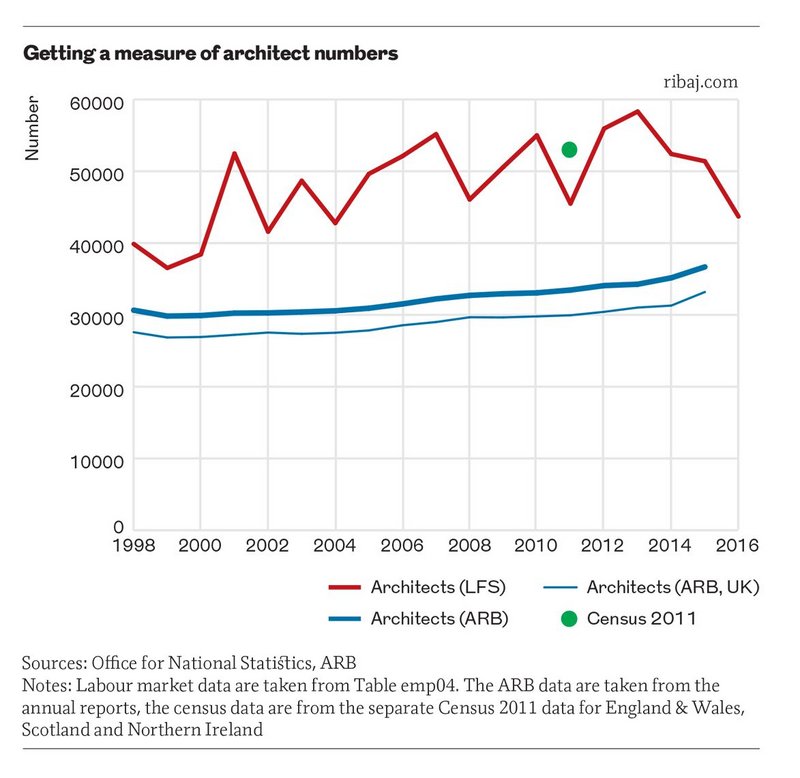 According to the latest the Labour Force Survey (LFS) tally published by the Office for National Statistics in August Britain had 43,702 architects in the spring of 2016. This is down from a peak of 58,322 in 2013.

On the face of it that looks shocking. But is it?

As with nearly all statistical and survey-based information, the answers are seldom completely simple. So, for instance, the LFS is one of the best surveys around with a sample size of about 40,000, but you’d be a fool to take the numbers above too literally.

The sample picks up less than one in a thousand of the adult population, so one person either side of a representative number of architects when scaled up would make quite a big difference.

People don’t come in fractions, so even if the sample is truly random and truly representative, the data year-to-year is going to fluctuate considerably.

As you can see from the associated chart, the numbers (represented by the red line) are volatile. The 2011 figure, for instance, appears to be well out of the trend.

But while the exact number measured annually may be fairly questioned, the figure is going to be a reasonable stab and the trends will have some meaning. So is the downward trend real?

Before answering that, it’s worth checking whether the actual levels are realistic. Does a range of 40,000 to 60,000 reasonably reflect the number of architects?

There are of course other ways to gauge how many architects there are. We could, for instance, look at the census. Luckily most of the census data – that for Wales, Scotland and England is fine-grained enough level to provide a direct figure for architects.

In England and Wales the census for 2011 picks up 46,568 architects. Scotland found 4,463. In Northern Ireland there are 5,881 in the broader category which includes the likes of town planner and surveyors. Of this group other data suggest that architects represent about 20% to 25%, so could approximate to 1,300. That gives us a figure of 53,750, to the nearest 50.

Plotting this figure on the chart (green marker) shows how the census measured more architects than the LFS measure. It will be more accurate as it is a census not a scaled up sample. But the census figure is broadly in line with the LFS measure, suggesting the series is very much in the right ball park – if volatile.

The Architects Registration Board (ARB) counts its registrations of those who can trade as an architect. This provides a strong indication of trends in architect numbers. The headline ARB registration figure has been plotted on the chart (blue line). This number includes overseas architects, but the UK base (thin blue line) is pretty consistent at 90% give or take less than 1%. The latest figures show 36,678 registered architects in 2015, with 33,184 in the UK.

The census figure is broadly in line with the LFS measure, suggesting the series is very much in the right ball park – if volatile

This all seems to fit together in broad terms, if from a data point of view those who are ARB registered are regarded as a subset of people that might reasonably call themselves architects even if they aren’t trading as ‘architects’ – certainly when asked their profession in a labour market survey.

There is, after all, a relatively sizeable period between someone embarking on a career as an architect post-graduation and being able to register with ARB, in that registration requires qualification of, or equivalent to, Part 3. That would create a gap between people who might call themselves architects and those who are registered architects. This gap would be widened by those who might be trained and regard themselves as architects, but who do not practice in business. The large ebb and flow of many hundreds of resignations, removals, reinstatements and readmissions out of and into the ARB register certainly seems to support that view.

So we appear to have a reasonable idea of the actual numbers of architects. The important question is whether three years of fall in the LFS data is real when, at the same time, ARB figures suggest numbers are rising.

A first thought is that, while the LFS survey may be volatile, three falls in a row is a strong hint that numbers are declining.

We can look to other data that might corroborate or challenge this view – the Creative Industries statistical series comes to mind. This picks up employment among architecture when measuring the creative industries, economy and occupations. This data definitely suggest a decline in employment within the broader occupations making up the architectural businesses in the UK. The problem is that much of the data ties back to the LFS for its source on occupations.

The Annual Business Survey, from which we can get data up to 2014 on employment, is independent of the LFS. Its employment measure is a bit unreliable, but it suggests growth in average employment for architectural businesses from 2008 to 2014 – though nothing spectacular. Interestingly, it shows a dip in 2011. The general growth fits the upward trend we see in architect number in both the LFS and the ARB data over years, but tells us nothing about a fall.

While the LFS survey may be volatile, three falls in a row is a strong hint that numbers are declining

So, from hard data derived from representative random samples, it is tricky to know whether the recent fall in architects suggested by LFS is an anomaly or something more serious.

We can look to the monthly RIBA Future Trends survey for some guidance, as it asks about employment. It points to growth in employment among practices over recent years. This would seem to throw into question the LFS data.

However, perhaps paradoxically to some, recording more firms employing people or intending to employ people doesn’t necessarily mean the numbers overall are growing. While a very useful indicator, this survey is not based on a random sample taken from a rigorously-managed sampling frame. We can expect it to have various effects at play, such as optimism bias or survivor bias.

It might be, for instance, that architects are shifting from micro or small practices to larger practices, as might happen in a recovery or through consolidation. If the small practices consequently close as a result of people leaving, they are lost to the survey, but the practice gaining the new staff would be included. So it is quite possible such a survey might suggest increasing numbers in employment (as is true of the surviving practices) when actually the overall number is falling, a fact missing because those firms disappearing are excluded.

Furthermore, it is measuring architects that are in practices, not the greater pool of potential talent available that might be being picked up by the LFS.

From here we are sadly left to speculate on what might lie behind the rising ARB numbers and the falling LFS numbers and how they might be consistent.

On this basis the measured fall in architects in LFS, if real, may be saying something quite serious. Perhaps there is slack in the pipeline with fewer young architects coming through.

Clearly the dynamics are complex, with people moving in and out of the profession and choosing to retire at different times. The long-term effects of deep and prolonged recession to the pipeline of young architects is hard to gauge. Meanwhile, we have not explored the age profile, so if that were to suggest an imminent wave of retirements then this would compound any potential shortfall in young architects coming through the system.

It may prove to be a false alarm, but if the LFS data says one thing it is that it’s well worth keeping a very close eye on how many architects there are in the UK at various stages of their career.