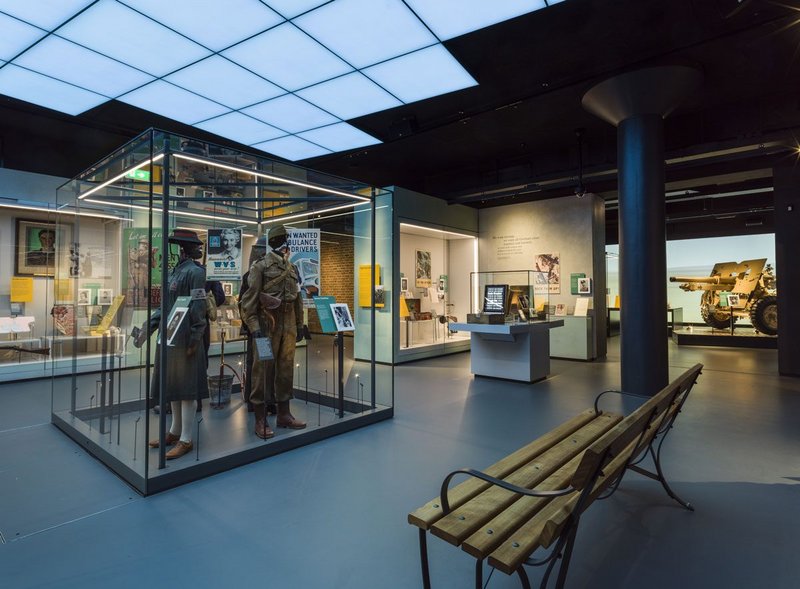 A V1 flying bomb deftly links the Imperial War Museum London’s new £30.7 million Second World War and Holocaust Galleries both spatially and thematically. It hangs in a void cut between the stacked exhibition spaces, representing both the source of so much aerial destruction, and the forced Jewish labour who were compelled to dig the tunnels where the bombs were made.

This is typical of the thought behind the 3,000m2 galleries, a massive undertaking which has been delivered with sensitivity and aplomb. Coming at a point when the events of those times are passing out of living memory, this feels like a very important endeavour. This is especially the case given that understanding of the Second World War, and its connection with the Holocaust, is somewhat hazy – a recent YouGov poll found that only 58% of 16-26 year olds realised that Japan was Britain’s enemy.

Surprisingly, this is the first museum to present both subjects under the same roof. Clearly there is a need for the story to not only be told, but to be told in a way that reveals its complexities, however difficult, rather than relying on easy short hand. Two of the main achievements are to show the war in a truly global context, and to reveal the narrative of both galleries through the personal experiences of those who were involved. Importantly, this is done through contemporaneous accounts, never with the benefit of hindsight.

The success of the galleries is also down to the exhibition design teams involved – Ralph Appelbaum Associates with Dannatt Johnson Architects (Second World War) and Casson Mann (Holocaust) who have used their skills to fulfil these key curatorial themes. The designers have spent more than five years on the project, processing the huge amount of material and working with the curators to draw out the stories and present them in the most appropriate, and compelling manner.

‘We could have filled the whole building with the stories the museum wanted to tell,’ said Patrick Swindell, director of Ralph Appelbaum Associates (RAA), adding that the big challenge was creating a coherent experience from this vast narrative scope.

The Second World War Galleries’ narrative successfully shows the conflict through a global, as well as a British lens. We learn about the causes, spread and implication of the war through both broader descriptions and the testimony of more than 100 individuals from all walks of life including Billy Strachan, a Jamaican teenager who sold his bike and saxophone to sail to England and sign up as an air gunner. This personal touch encourages an emotional connection with now distant events. Large-screen visuals are used to great effect – a series of screens in the ceiling of one gallery is used to show footage of squadrons of planes flying above the visitors’ heads. New films of various war locations around the world such as Philippines and Russia are projected on huge screens as the backdrop for the uniforms of those who fought in that area, such as the fur-lined fatigues for troops in Soviet forests. Footage of the Battle of the Atlantic forms the backdrop for a sculpture showing the numbers of different vessels lost.

The popular 1940s house of the previous war time exhibition has been deconstructed into component parts such as the Morrison bed-beneath-the-table shelter, and cleverly recontextualised. What looks like vintage wallpaper is in fact a pattern made from a photo taken from the archives, while a wall sampler is a pertinent quote.

Mindful of exhibition fatigue, as the narrative progresses, the designers increased the use of visual media such as films. The end point is not VE or even VJ day, but the Legacy of the War from 1945-9, taking in themes such as the NHS and the War Crime Trials.

Light is a major theme of the Holocaust Galleries. Designer Casson Mann resisted use of a darkened setting that might be considered to match the gravity of the material, and instead sought to create light filled galleries in the spirit of conveying full knowledge of the terrible events, and of bringing evidence into the light. The killings of Jews years before the horrors of the gas chambers were hardly happening in secret, as the front pages of many international newspapers of the time testify. Media design and content by Squint/Opera helps create an immersive atmosphere. Colour films, and life size cut-outs of some of the individuals whose stories are told, serve further to establish that these atrocities happened, as director Gary Shelley puts it, ‘in the same reality as we exist’.

Key Nazi figures are shown as people rather than mythological figures, and with the device of a dark timber backdrop. As the Nazis increased the restrictions on Jewish people in the 1930s, their ‘perpetrating’ narrative is always counteracted with that of a ‘perpetrated’ Jewish person.

Sensitive decisions were taken with key material. It was decide not to show the Leni Riefenstahl films glorifying the Nazi staging of the 1936 Berlin Olympics but instead show images of contemporary persecution of Jewish people. Rather than focus on the book-burning images of 1933, the designers included a bookcase with copies of some of the offending titles reinstated on the shelves. To tackle the frequent question of why more people didn’t try to leave before it was too late, there is a visual representation of the daunting amount of paperwork needed. Contemporary accounts of those being transported recall the bemusement of people who had no way of knowing their fates at the time – the words of those who didn’t survive are illuminated.

In the death camps, single objects that people left behind are included with their story rather than showing piles of artefacts. It was decided not to enlarge photos as big images of suffering – these remain small, emphasising the fragility of life. When the camps are eventually liberated, there is no sense of celebration, just the challenges that the survivors then faced, and the pursuit of some sort of justice. Enlightening, engaging, reflective and sobering, these expertly realised new galleries are a triumph.