With the changing of the generational guard, the implications for the construction industry could be profound

The current focus on generational differences is huge, for good reason.

Millennials are flowing into the world of work and developing career paths as the baby boomers are increasingly ebbing into retirement. There’s a sense of a change in the guard, so naturally there is keen interest in what the up-and-coming generation really thinks.

This is because millennials are steadily displacing baby boomers on the political, cultural and economic stages. And there is a sense, fear for some, that these generations think very differently. It is often described as digital replacing analogue.

Numerous robust studies suggest millennials will be the first generation in modern times to end up economically worse off than their parents. That’s profound. It will force real change in outlook as well as action. It is important to track the possible effects and any other related trends, especially in view of how it might affect the built environment. What is built must span generations.

This brings us to an intriguing finding within a poll undertaken by ComRes, funded by the Chartered Institute of Building, the RIBA, the RICS and the Construction Products Association. The poll, not published to date, is part of wider investigation. But one of the eye-catching results was from responses to the question: ‘I feel more comfortable in newer buildings than old ones.’ 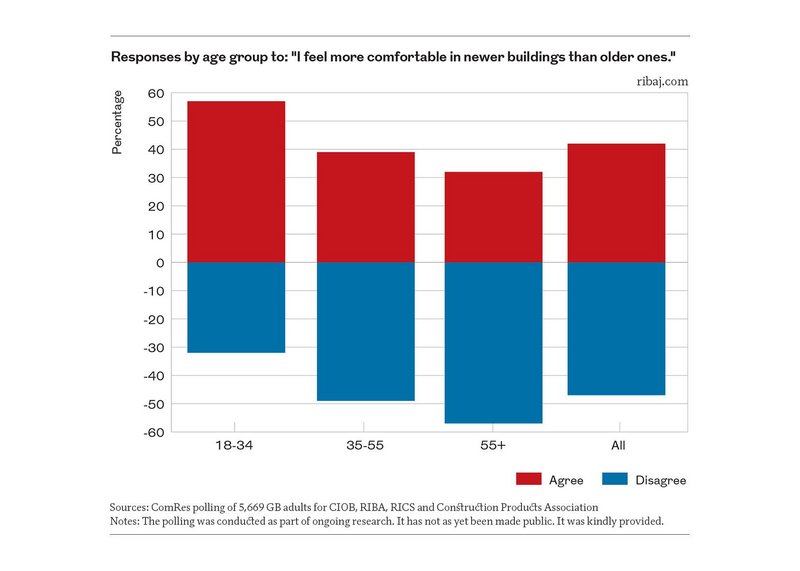 Chart 1 shows the result. Overall a small majority disagreed and are more comfortable with older buildings (47% to 42%). However, among 18- to 34-year-olds – millennials – 57% agreed and 32% disagreed, showing a sizeable preference for new buildings, particularly among those under 24 years old.

The baby boomers, crudely represented by the 55+ age group, held the reverse position with 57% disagreeing and 32% agreeing. Those between 55 and 64 were the least in favour with a slightly milder view among those 65 and over.

You might dismiss this as simply ‘older people like older buildings’, but it is worth a second look. It might be true today, but has this always been the case?

History suggests, if only circumstantially, that it doesn’t always follow that the younger generation favours the new over the old and vice versa, at least when it comes to housing. 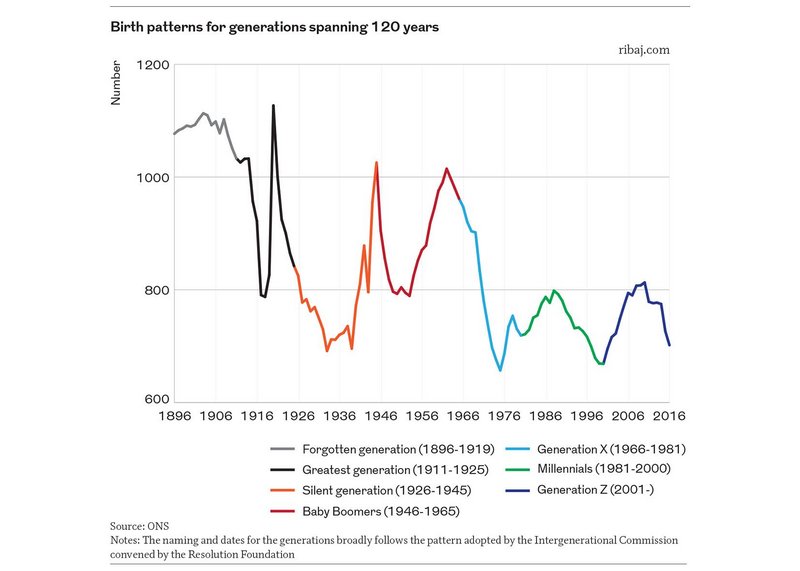 Baby boomers growing up in the 1950s and 60s witnessed a thirst for modernity among their elders, the ‘silent generation’ (Chart 2 provides a key to the generational names). This generation eagerly covered with hardboard almost any Victorian fussiness and excessive detail – panelled doors, crafted banisters, fireplaces – to create sleek surfaces. It seemed to embrace new buildings and even new towns as many bolted from Britain’s depopulating cities.

When baby boomers reached adulthood, most eschewed this interpretation of modernity. They took cues from the young professional radicals of the silent generation who in the 1950s sought out and revamped London’s Georgian housing in Islington, Camden and Notting Hill. They repopulated and gentrified down-at-heel inner urban areas, stripping out the hardboard modifications of previous owners. By the 1980s it was the thing to do.

Shifting taste, expanding home ownership and aspiration will have played a part as social mobility surged. The 1980s’ shift to a post-industrial economy may also have sustained the trend, as might elements of proto-environmentalism. 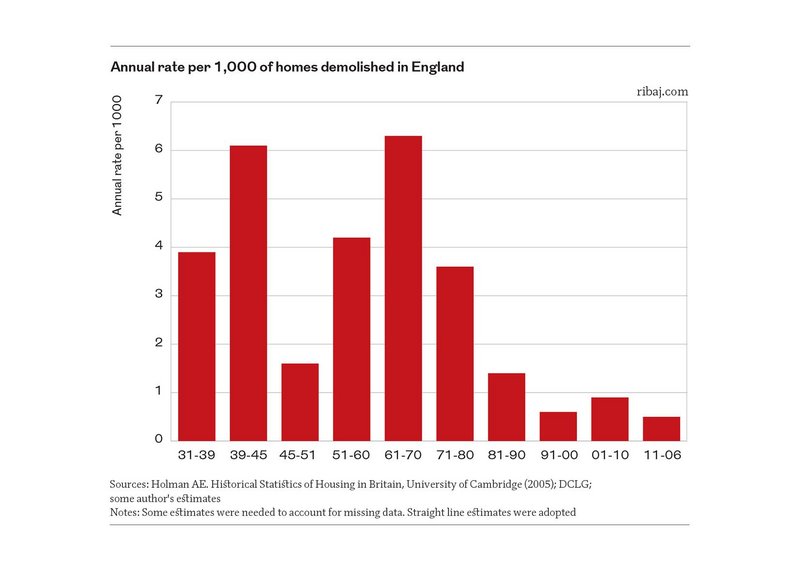 Whatever the mix of causes, the move to embrace and rehabilitate the old was in tune with a shift in central and local government thinking in the 1970s, away from clearance and rebuilding toward renovation. The demolition figures in Chart 3 show this turning tide.

For aspirant baby boomers it made perfect sense in the 1980s, especially in the South East, to cherish older housing, as career and financial opportunities revived population growth in cities, notably London. Old houses tend to occupy or fringe the better-connected locations. With handsome grants available in the early 1980s, renovating blossomed. The value of old homes became embedded in the mindset of the baby boomer generation.

We find evidence elsewhere that preferences for new or old homes are not simply a function of a person’s age. In Japan, the average lifespan of a house numbers in the 30s. The reasons for building almost temporary homes may be many, but it is culturally entrenched across generations.

So, are we seeing a trend emerging – a shift towards placing more value on new buildings? It will be some time before we can be sure. But let’s assume the generational changing of the guard is starting to create a different pattern of preferences within the adult population: what might this mean for architects and the built environment?

Development of commercial buildings, outside of planning and historic building restrictions, is driven by commercial pressures. Generation taste may be a factor, but let’s stick to housing. Dwellings represent the biggest slice of the built environment by value according to national statistics – £1.8 trillion, excluding the land, with replacement valued at £3.2 trillion. 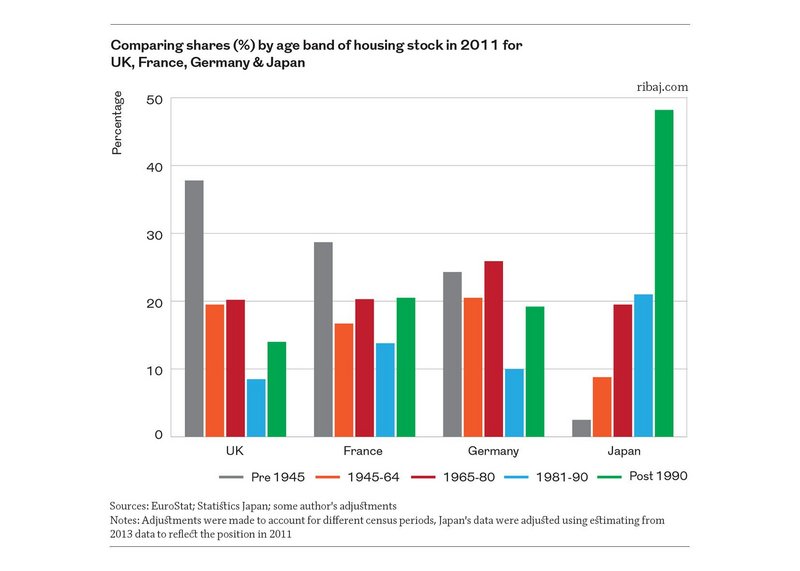 One fact stands out. The UK has, arguably, the oldest housing stock of any developed nation. Chart 4 shows the age of homes in 2011 for the UK, France and Germany, with 2013 survey data for Japan slightly adjusted to match.

The contrast with Japan is startling. Japan doesn’t do old houses. The UK doesn’t seem to do new ones. About 16% of its stock is younger than 25 years old and less than a quarter younger than 35. In 2015 more than a third of UK homes dated from before the Second World War and about 20% from before the First World War.

Even among the mature and historic housing markets of Europe, the UK has the largest pre-war housing stock. With demolitions running historically low, the average age is rising. With the demolition rate of the past 10 years, it would take about 1,750 years to clear the existing stock in England.

These figures suggest significant room to shift the emphasis towards building new rather than persistently repairing, maintaining and improving old stock.

This shift would mean more work for architects. Certainly, in Japan where new is the norm, the density of architects in the population is five times that of the UK. Naturally, making such a simple comparison is fraught with danger, but that’s what figures from the International Union of Architects indicate.

In Japan, where new is the norm, the density of architects in the population is five times that of the UK

There would of course be another bonus for the wider construction sector. A move to the new ought to boost industry productivity. Refurbishing homes, particularly in the piecemeal way it is done in the private sector, is very labour intensive. And building new homes in far greater numbers would also support greater prefabrication and economies of scale.

Most new homes would, at least should, be significantly more energy efficient and far better suited to modern living.

A shift to rebuilding might also throw up new opportunities to rethink how currently developed space is used, especially where cities have low-density urban sprawl forming what some believe are unattractive, uneconomic, disconnected ghettos. Well planned and executed regeneration of such areas might yield solutions to housing in high-demand regions.

But, as the saying goes, there is no such thing as a free lunch. The potential downsides are potent.

First, there is an unease with regeneration, a sense that it is often used to exploit desirable locations, pushing out the existing communities. There is unease with the ‘new housing product’, not least a fear that well-proportioned older homes may end up being replaced by ‘rabbit-hutch’ homes.

Perhaps the more challenging potential downside relates to the environment – the embodied energy or carbon within housing. The sums are fraught and rest on many assumptions about an unknowable future. A very rough rule of thumb says that over a 50-year span about 20% of the energy consumed by homes is embedded in building them.

It doesn’t take much tweaking of any assumptions made to radically change this proportion. So, in real life, the actual proportion of embodied energy or carbon relative to the total consumed over a lifespan of a house will vary widely according to circumstances, not least in how and with what the house is built or how the occupiers behave.

The consensus emerging from the sums produced so far suggests that rehabilitation of old homes in most cases trumps demolition and rebuild on the grounds of energy, carbon and cost.

Also, the more you reduce daily household consumption of energy within a home through energy saving measures or the more consumption is from renewable low-carbon energy sources, the more important a factor embodied energy becomes.

This suggests that to win a case for expanding new build, homes consume less energy in their production.

Clearly the variables are numerous. But with such an old stock of houses in the UK there will be limits to how much and how many times it can be rejuvenated. There is also a broader challenge in repurposing the wider built environment to meet shifting social and economic demands. Gradualism may be comforting, but there will be occasions when more radical change is needed. Over to you, millennials…