Another school year has kicked off with a ritual period of mixed emotions for parents of new starters. For some this is eased by relief that their child got a place at their chosen school, while for others there’s the added upset that they didn’t.

It’s a prime time for news stories highlighting the struggles faced by the latter group. But is the struggle to find school places getting tougher?

The statistics suggest that it is. And judging by recent headlines there are far harder times ahead – according to the Local Government Association (LGA), ‘Thousands of children face missing out on a secondary school place in the next five years with more than half of all councils in England at risk of not being able to meet demand.’

This is not only a major challenge for educationalists, but also for the construction sector tasked with creating extra spaces in secondary schools and the architects best placed to design how those spaces should be shaped.

There are programmes in place to deliver new places, but if the tone of the LGA release is an accurate guide to what is happening on the ground, there may be trouble ahead.

As a species we tend to be relatively poor at recognising and preparing for the impact of demographic changes, but pretty good at sensing (and complaining) about resultant ill effects.

We’ve known for a decade or more that a surge in pupil numbers was on its way. In the noughties live births rose sharply across the UK, from a low of 670,000 in 2001 to top 800,000 by 2010, before easing again in 2013. That rising tide of new Britons is now, as was inevitable, crashing on the shores of the nation’s secondary schools. 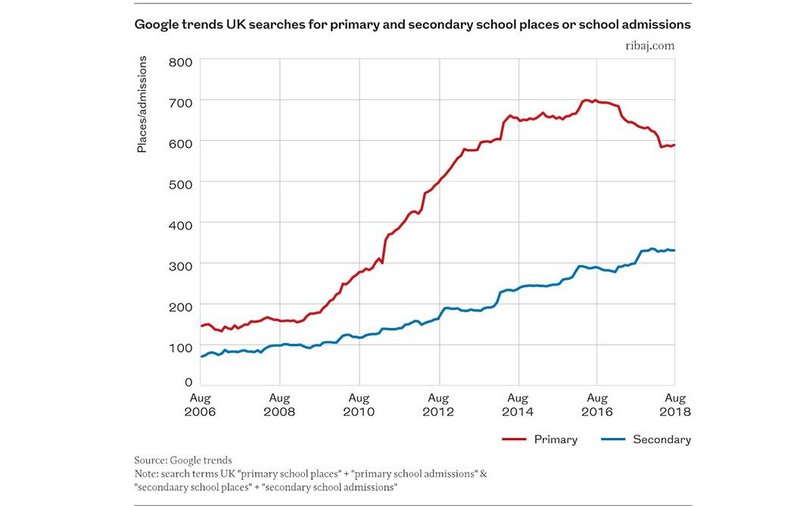 Using Google trends data on searches of ‘school places’ or ‘school admissions’ (+ primary and + secondary) may not be rigorously scientific in telling us precisely what is going on, but as Chart 1 shows, there has been a steady rise in interest over the past decade or so. A sharp spike in interest in primary schools has eased, but interest in secondary school places is gathering pace.

Compare this profile with the rise and fall in the numbers of schoolchildren over time and the Google trends profile makes sense and points to where the tensions lie. 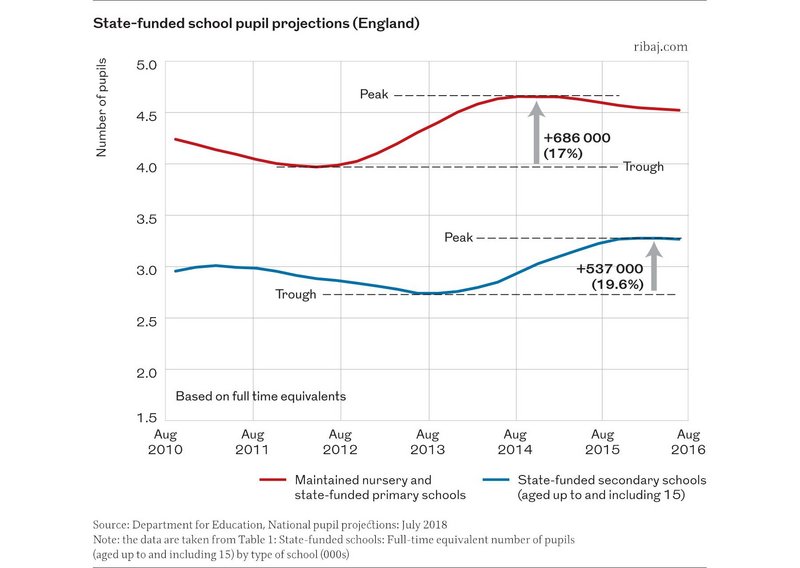 Delivering 20% more school places for secondary pupils over a decade is no mean task. Obviously, there is flexibility within class sizes, which can absorb some of the pressure. And, yes, there is redundancy in the system, particularly after a period of decline in secondary school numbers up to 2015.

But there is still a huge challenge, which is not simply to provide enough places for pupils at a national level, but enough in the right places. Furthermore, if we want ‘choice’ rather than ‘allocation’ there needs to be more than enough places.

A 2015 report by government spending watchdog, the National Audit Office (NAO), found there was a large amount of spare capacity in some areas, particularly in secondary schools, but little in others. The need for new places was found to be much higher in London and the South East. 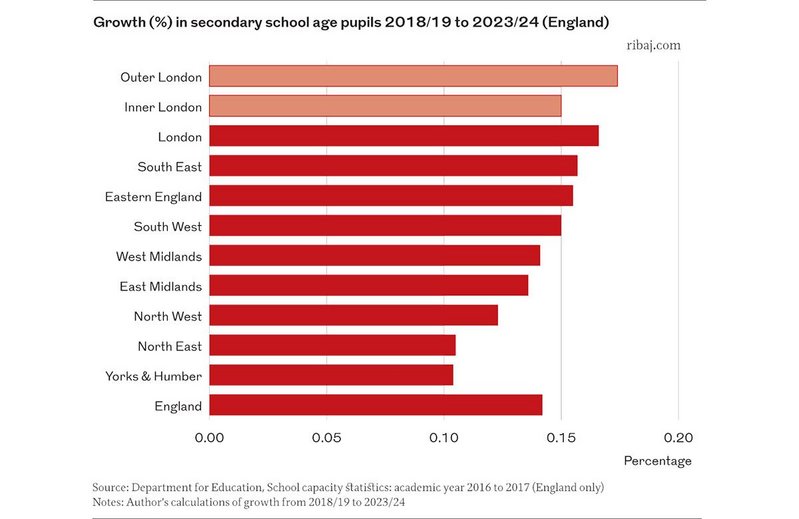 We can see this in Chart 3, which shows that there is a regional dimension to the rates of expansion in pupil numbers. London, especially outer London, is set to see the fastest expansion. But within these regional variations there are significant local disparities. Some local authorities, such as Manchester and Reading, are looking at rates of expansion topping 30% over the next five years.

Fortunately, after the huge investment in education buildings in the first decade of the 2000s, the overall quality of the education-related building stock is better than it might have been. However, the 2015 NAO report estimated that 60% of the school estate (in England) was built before 1976. The estimated cost to return all schools to satisfactory or better condition was £6.7 billion, with a further £7.1bn to bring parts of school buildings from satisfactory to good condition. That is set against an annual budget for English schools of below £5bn to cover all capital spending.

The process that brought improvement in the first decade of the 2000s has come in for significant criticism for being overly lavish and poor value for money. But even with a highly efficient machine to deliver the necessary new places, it is going to cost a lot. It takes sound planning, expertise and adequate resources to deliver even to a basic level of satisfaction. If we want to build to inspire, rather than simply make do, it takes much more and it all costs money. 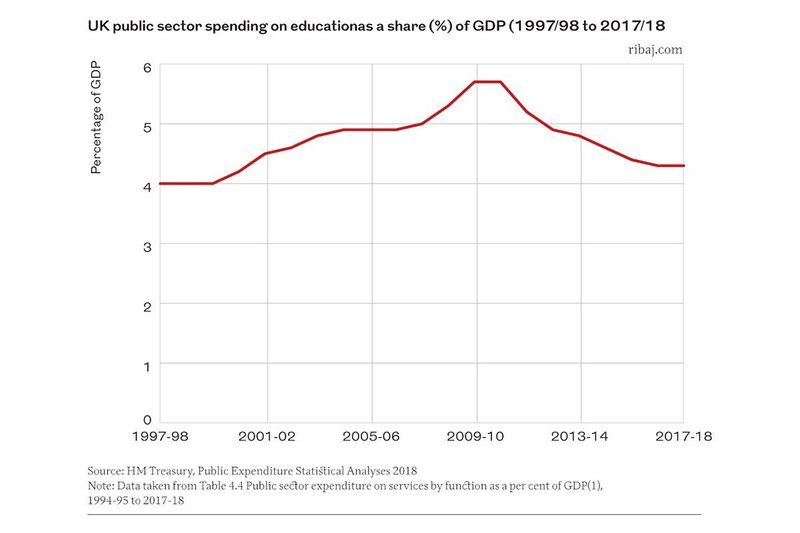 There’s the rub. In real terms education funding has been in decline despite rising pupil numbers. It is down around 14% since 2010/11 and as a proportion of the nation’s gross domestic product it has fallen sharply indeed, from 5.7% in 2010/11 to 4.3% in 2017/18 (Chart 4). Over this period the proportion spent in the capital budget, of which building will be a hefty share, has held broadly to the long-term share of about 12%.

For reference, across the UK the entire education capital spending in 2017/18 was estimated at £9.6bn out of a total budget of about £88bn, a bit below the average share in recent years. 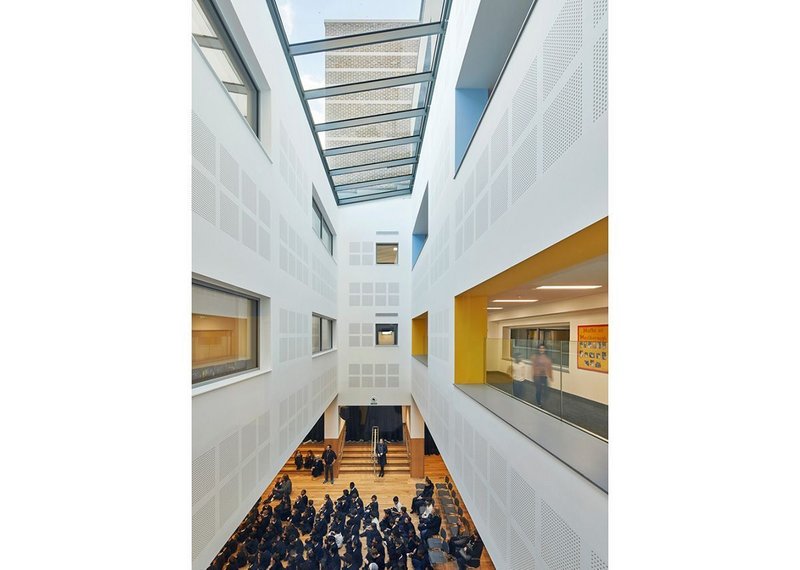 Orders for publicly funded new building work on schools and colleges has been in decline since 2009, and funding is also in decline, though some high quality schools are being built such as Dixon Jones’ Marlborough Primary School, Chelsea, London. Credit: Paul Riddle

In June, Damian Hinds, Secretary of State for Education, said in a House of Commons written statement: ‘We are investing £7bn from 2015 to 2021 to create new school places. This forms part of our wider plan to invest more than £23bn in the school estate by 2021.’ But the whirligig number generator governments seem to use to present capital spending makes it tricky to derive any real sense of what this means on the ground. 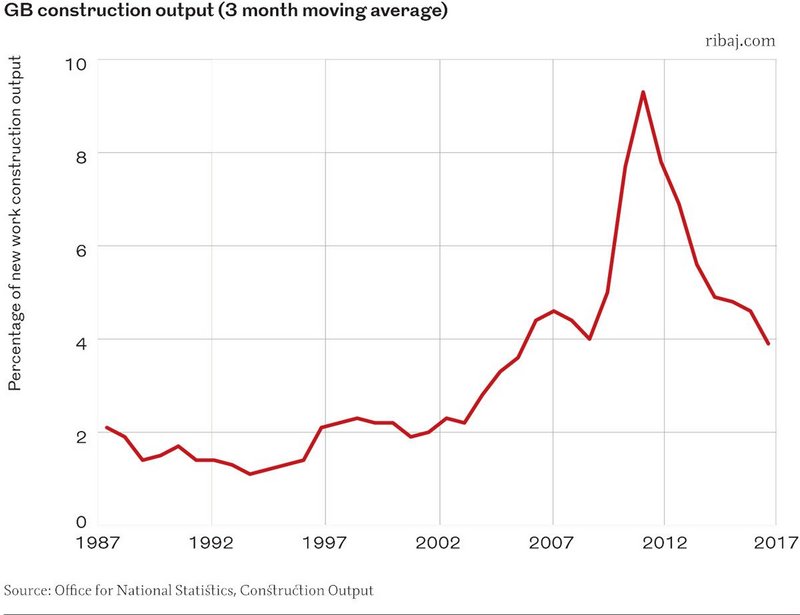 From a building industry perspective we can see clearly in the construction output statistics that publicly funded new-build work within schools and colleges has slumped dramatically. In 2010 it represented 9.3% of all new construction work. In 2017 it was 3.9% (Chart 5).

Perhaps more worrying is that the work in the pipeline for education doesn’t look any more encouraging.

Orders for publicly funded new building work on schools and colleges has been in decline since 2009, although in 2017 there was some sign of stabilisation. This is in cash terms, which means much bigger falls in real terms.

Figures from Barbour ABI show that the value in current prices of contracts awarded annually for education-related projects over the past two years is about 14% lower in cash terms than the annual average over the previous five years. You may get more for less, but you’ll struggle to get more for 14% less before accounting for the effect of inflation over the period. 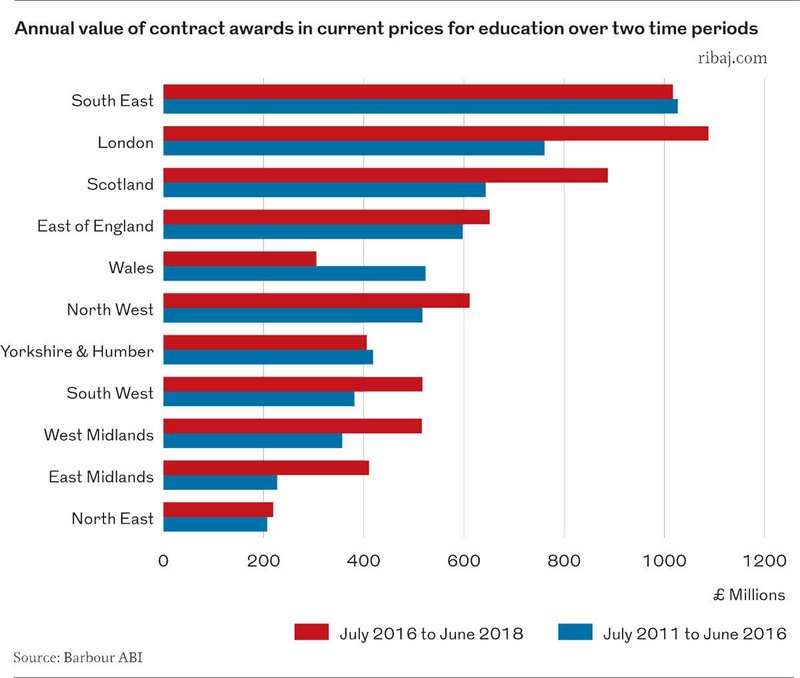 Chart 6 shows the annual value of contract awards in education by region over the past two years compared with the previous five years, to give a feel for the ebb and flow of the workload pipeline and the size of the regional pie. This is a wide measure as it includes all education work, but it does provide an indication of where the action is and where it is rising or falling.

Without forensic analysis and heavy-duty number crunching it really is tough to get an accurate picture of the state of play on delivering the necessary school places in terms of numbers, flexibility and adequacy. The picture is further clouded by the added complexity created by the introduction of academies and free schools and a renewed interest in grammar schools.

But there is a sense in the figures, and certainly in the LGA’s announcement, that the bid to deliver more secondary school places is falling behind the curve and may not be progressing as smoothly as the government might suggest.

Will that mean a sudden surge in effort in the coming years in the face of political pressure? With eyes focused firmly on Brexit, the potency may be diluted. But it is perhaps not unreasonable to speculate that in a year or two the pressure to provide many more secondary school places in key parliamentary seats may lead to a rush for quick-fix solutions.