With exports doubling in the last 10 years, can the profession maintain its strong international position post Brexit?

Britain’s architects have sustained their foothold in overseas markets and in doing so supported the widely-held ambition to rebalance the UK economy.

That is, they were doing so up to the end of 2015. This is clear from the latest official balance of trade figures published late last month by the Office for National Statistics (ONS). Since then the EU referendum vote has potentially shifted the tectonic plates of the UK’s international trade.

The figures for 2015 do show a fall in exports, but it needs to be looked through and seen in context. The measure is pretty volatile and subject to fairly large revisions, so it’s a fair assessment from reading the latest data that the underlying pattern of a step change in exports held firm.

Importantly and encouragingly, this suggests that practices did not ease off on international markets when prospects at home improved. What’s more, there still appears to be a strong appetite overseas for UK architectural expertise.

Encouragingly too, the data suggest similar success in exports of construction and engineering services. This is important because British firms operating overseas help open opportunities for firms they do business with at home.

The chart shows a leap in overseas architectural activity from 2006 onward. This was fortuitous as it helped take some of the sting out of the 2008 recession which lay ahead.

Using data on the economic activity of architects taken from the ONS analysis of the creative industries, the suggestion is that in the 10 years from 2006 to 2015 the value of exports averaged 10% of the gross value added (economic activity) of UK architectural businesses. This compares with a figure nearer 5% in the preceding 10 years – doubling the proportion of UK total architectural work stemming from overseas markets. 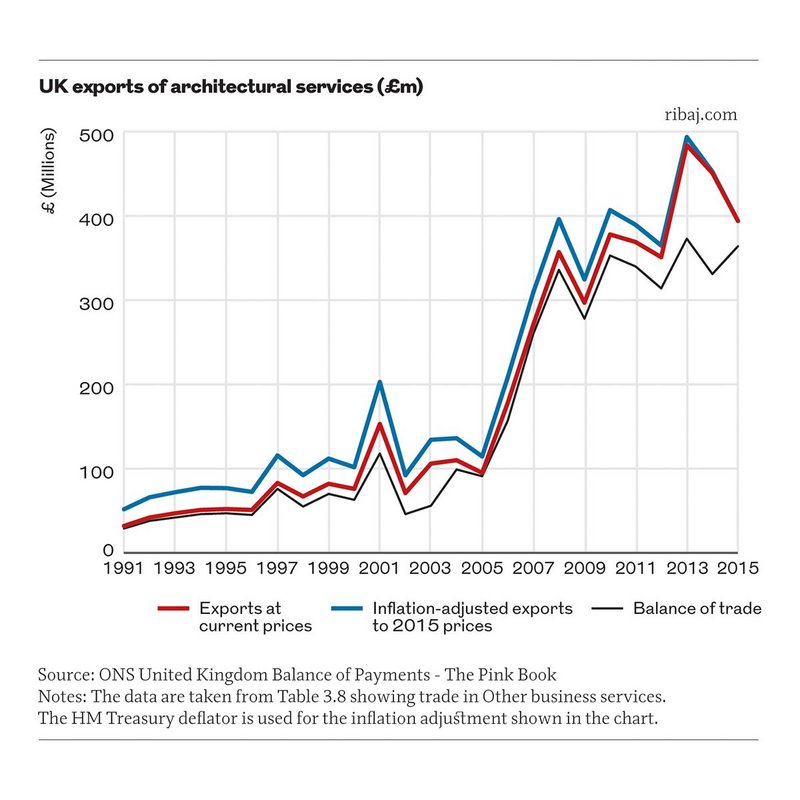 That architects are still delivering work abroad has huge benefits. It provides a buffer against volatility in the home market. It provides a greater variety of experience for UK professionals. It clearly helps the UK trade balance. And it cements the UK as a beacon of architecture across the globe, particularly in developing nations where most of the expansion in construction is happening.

The figures show the increasing importance of architects to the UK economy as a whole. Over the past 10 years the positive balance of trade has been £3.5 billion in total (an average of £350 million each year). In real terms that’s more than three times what it was in the previous 10 years.

Inevitably these figures, which pre-date the EU referendum, provide an added incentive for architects to lobby for terms that support rather than inhibit overseas trade in services. Having made major inroads into the booming overseas construction market and seemingly sustained a heightened presence that provides a solid platform from which to further expand, there will be concerns that unfavourable trade and labour movement terms will make overseas trade tougher for UK practices.

In reality the impact of Brexit on overseas opportunities for UK architects is unlikely to be divined from this particular series of figures for a couple or more years. However, anecdotal and survey evidence will soon show how the vote, at least, has influence the appetite of overseas clients for UK architects.

The likely short-term effect is that the uncertainty caused will delay or dissuade some decisions that might otherwise have been made in favour of UK-based practices. The longer-term impact will be governed by how well and how quickly trade deals are secured and the constraint put on the movement of people.