Lofts, basements and general home improvement work has bucked the recessionary trend in recent times. But that could be changing

Home improvement work has surged over recent years and opportunities have blossomed for architects.

The latest RIBA Business Benchmarking report shows that in 2017 housing accounted for 57% of the £3 billion of revenue earned by chartered practices, with much of that coming from one-off homes and extensions.

The fortune of Britain’s architectural workloads rests heavily on the level of home improvement. For many smaller practices and individual architects, particularly in the regions, it is the backbone of their work.

Even a passing glimpse at the statistics shows that times have been good over the past four years or so.

The Office for National Statistics (ONS) construction data shows a rise of more than 20% in its volume measure of private housing repair maintenance and improvement. In cash terms the rise was almost 40% and now stands at an annual figure of £22.4 billion. That may not all be home improvement work, but a substantial part of it is.

ONS family spending data also show strong growth in home improvement. The average UK household was spending about £900 a year on alterations and improvements to dwellings in 2012 and 2013. Over the past two years the figure was £1,300. That works out at about £35 billion spent annually across the UK.

Meanwhile, figures from Barbour ABI’s recently launched Home improvers of Great Britain 2018 report shows a 24% rise in the number of home improvement planning applications over the past four years.

You’d normally associate these kind of growth rates with a boom, if it wasn’t for the effects of the earlier recession. But either way it’s been a happy journey in recent years and architects have prospered on the back of it.

In 2018 there were about 470,000 home improvement planning applications, of which about half were for extensions, lofts or basements. Added to this are another 60,000 or so applications for exterior buildings. That’s a lot of plans.

All that good news leaves one question bursting to be answered – will it last?

To answer that, you need to understand the drivers and here the Barbour ABI report is useful. 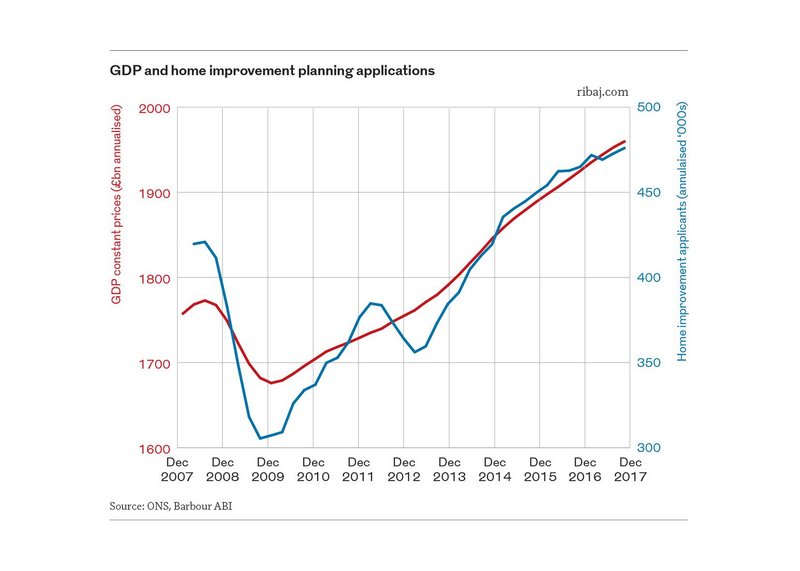 The first thing to grasp is that, not surprisingly, the economy and economic growth plays a big role. You need look no further than Chart 1 to see that.

The second thing to note, again not surprising but also not necessarily fully appreciated, is the link with house prices. 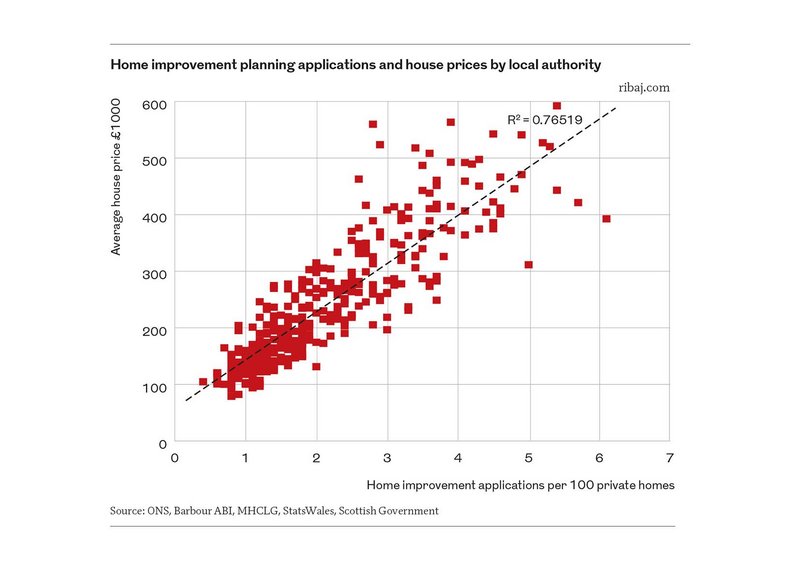 Chart 2 shows the strength of the correlation between average house prices in boroughs across Britain and the number of home improvement applications for every 100 private homes. The chart ignores a few more outrageously priced boroughs, where average prices top £600,000. 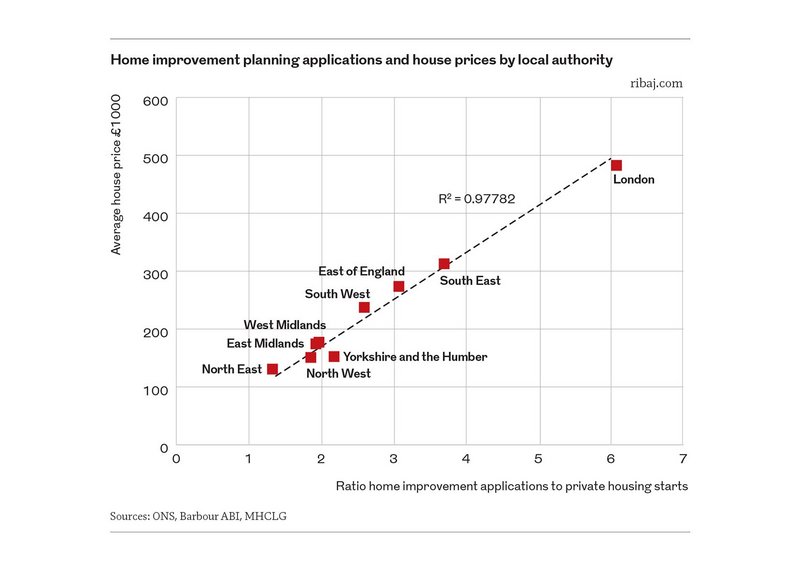 Chart 3 is worth looking at just because it’s fascinating. It shows the ratio for each region in England of home improvement planning applications to new private housing starts over the past five years and how this ratio relates to average house prices in those regions. You can with some confidence assume house prices play a strong role in that relationship.

Again, not surprisingly, there is a strong link between the incomes of households and how likely they are to spend on home improvement. Better-paid people tend to live in areas with higher house prices.

Within all this there are important nuances to note, such as age effects. Baby boomers tend to have more housing wealth (equity) even if they have lower incomes. This has multiple implications. An obvious one is that downsizers moving out of high-house price areas (eg London) to retreat on or in advance of retirement to, say, the South West may not have the income to support home improvement, but they may well have the equity.

Bearing as much of this in mind as we can, let’s start to unpick what appears to be happening currently. We can start by looking at house price changes to get some clues, although we must remember they are not the only driver of home improvement.

London had been a beacon of growth in home improvement, kicking off like a rocket once it had shaken off the dust of the recession. Numbers of planning applications grew annually by more than 18% in both 2013 and 2014. This corresponded with rapid house-price rises.

However, following the EU referendum, there was a distinct downshift in house-price inflation in London. Some boroughs have seen prices dips, confidence has taken a knock and the general view is that London is now one of the weaker markets in terms of house price growth. 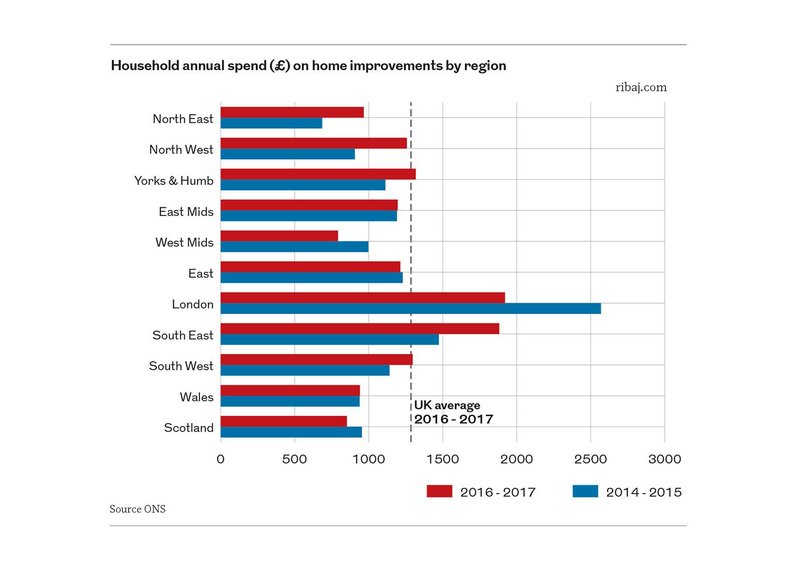 This gearshift in house-price inflation in London echoes in the data from Barbour ABI, which shows that while across Britain home improvement applications continued to rise in 2017, in London they fell.

We can feel the brakes being applied too in the ONS family spending survey data. Households in London still spend far more than the rest on home improvement on average. But where they were spending on average about £2,600 a year in 2014 and 2015, over the past two years that average annual spend has fallen to below £2,000. Meanwhile, in the North the spend has risen by about 40% between the two periods.

It would be wrong to think that it is just house-price inflation itself that drives home improvement. It helps, certainly, in supporting confidence. But, all other things being equal, the simple maths tells us that the more a house – or rather the land beneath it – is worth, the more value you are likely to get from an improvement. The lifting of house prices outside London in recent years has made the case to improve those homes far stronger.

Looking at the dynamic, what we appear to be seeing is a fall in home improvement in London and a rise in the regions as a wave of rising house prices ripples out from the capital. What’s more, the home improvement market in the regions may well continue to benefit from the inward flow of housing equity resulting from the outward migration of equity-rich households from London.

The net effect is continued vibrancy in regional markets. So when we see the RIBA Future Trends Survey say, as it did in February, that the most buoyant sector is private housing, that small practices are the most upbeat and the most positivity is to be found in the North of England and the least in London, we shouldn’t be that surprised.

In London the metaphor for the home improvement market may well be encapsulated in the bursting of the basement boom. According to the Barbour ABI figures, in 2013 half the planning applications in Britain for basements were in three London boroughs – Kensington & Chelsea, Westminster and Hammersmith & Fulham. Last year there were as many applications made outside London as there were in these three boroughs. 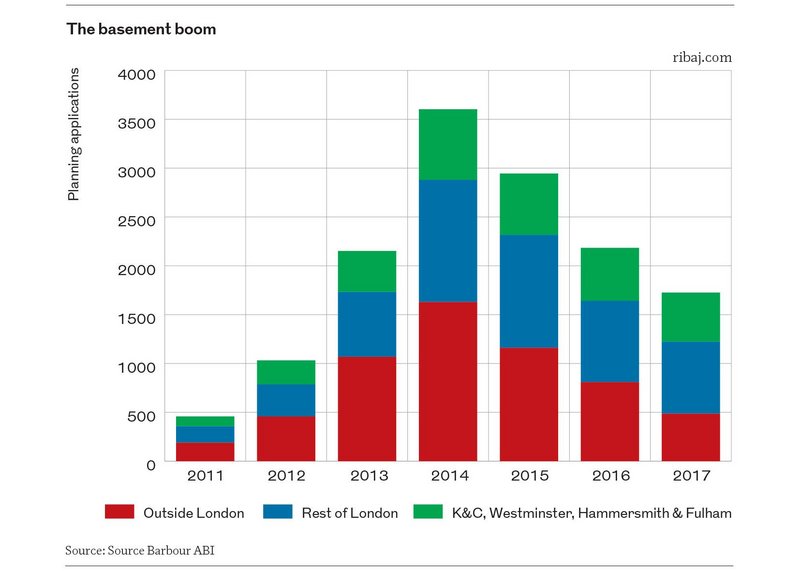 For those who were somewhat unsettled by stories of foreign finance funding “iceberg houses” along numerous streets in the more well-heeled London boroughs and who like their schadenfreude delivered in graphical form, Chart 5 may provide some pleasure.

But for those who enjoy such basement humour, it is worth noting what else it tells us or reminds us. First, construction markets can be very fickle. Secondly, what starts in London often ripples to the rest of Britain.

This brings us back to the question of whether the growth most of Britain is seeing in home improvement work will last.

If house price growth begins to ease, the lift that has given to the market will weaken. If the economy eases and incomes are squeezed, the chances are that the flow of planning applications will slow. These are some negative ‘ifs’. One positive ‘but’ might be the swell of homeowning baby boomers heading into retirement. Should they in greater numbers choose to downsize and do up, then the market may even receive a further boost.

There are many determinants of the home improvement market, house prices tell us much, but can only so much. There are other tea leaves we can read.

One inescapable truth is that investment in home improvement tends not to come in small sums. So, by looking at similar-sized ‘big-ticket spending we should get a glimpse into the preparedness of households to shell out.

That is why car sales are regarded by some economists as a useful gauge to the likely future pattern of housing repair maintenance and improvement. It may not be wholly accurate, but it provides another guide nonetheless. The level of housing RMI does broadly follow car sales. Finer analysis suggests there is a lag, so what happens to car sales happens to housing RMI about nine months later. 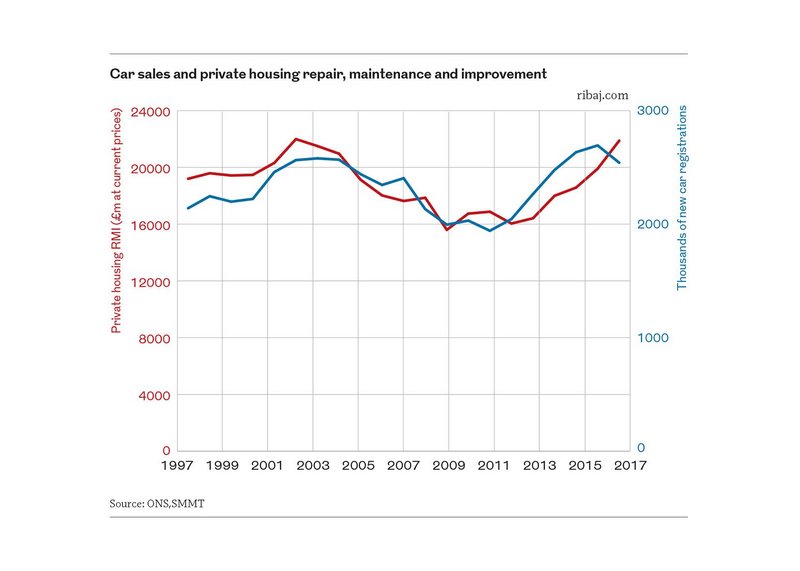 If we take the relationship of car sales to home improvement seriously, Chart 6 certainly isn’t encouraging. And that is before considering that SMMT, the industry trade body that collects the statistics, forecasts sales to fall again both this year and next.

It would be wrong to see this as providing a foregone conclusion that home improvement is set to plunge. The rise in car sales through to 2016 had been very strong, so a dip might be expected. But it is a sobering warning, particularly to those in the regions where workloads have been rising strongly of late, not to be complacent. Nor, for that matter, to take too much pleasure from the pain we see in London.

Brian Green is author of Home improvers of Great Britain 2018