Oxford’s Westgate shopping centre is so huge it took five practices to design it. How did the teams make that collaboration work for them, and for the scheme? 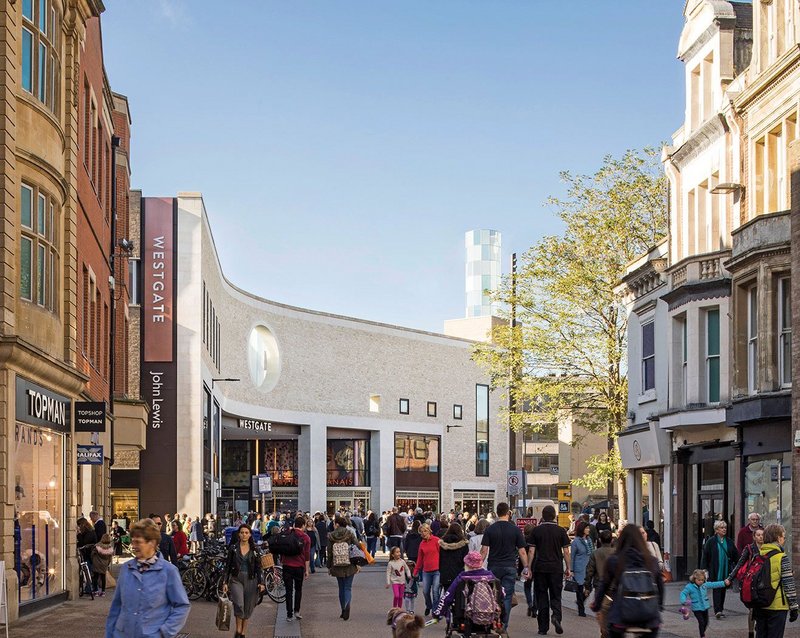 Westgate shopping centre has had more than one false start but that is hardly surprising for a 76,000m2 shopping precinct in a precious historic town. For a start there was the land assembly which included the compulsory purchase of some sheltered housing, although mainly it is replacing an unloved seventies arcade and a couple of car parks. Land Securities, Crown Estates and Oxford City Council got together to make the scheme happen as the Westgate Oxford Alliance. The council’s planning department – its fingers recently burnt as views were lost to an earlier development on the edge of the city – geared up to work exceptionally closely with the Alliance and masterplanner, BDP.

Peter Coleman, BDP head of retail, has worked on retail schemes throughout his career, including Chapelfield in Norwich and on the city-defining schemes in Manchester after the IRA bomb. BDP also masterplanned Liverpool One, which used 21 practices to transform a quarter of the city. When Land Securities asked him to join this project he did, happily, full time for five years. Walking around the shopping centre he has an amazing grasp of dimensions, brick types, bus shelter models and the many decisions and refinements that go into to making such a project.

With five practices involved – BDP, Dixon Jones, Allies & Morrison, Panter Hudspith and Glenn Howells – the complex dynamics of collaboration could be instructive, intricately bound up in the nature of the building itself. The masterplan suggested it should be a piece of the city, if not in scale then in airiness and cross-cutting routes that allowed the local lanes to squirm through the shops unimpeded except by pedestrianisation. These lanes define the block boundaries.

Each block was awarded following practice interviews. Some were to have ‘feature’ buildings: at the entrance from the city centre and Bonn Square, on a critical corner, and at the terminating point of the John Lewis anchor store. Others were to remain more recessive and all were to be built out with brick faces on what was rapidly established would be precast panels. The block architects had an influence on the roofs outside their buildings but BDP designed most of these and the shared spaces, including three larger ‘squares’. Stashed underneath the layers of shops are almost as many parking spaces as before (1000 compared to 1030). On top, looking over the spires of Oxford on one side and gentle hills on the other, are rooftop cafés and sunny terraces.

The architects met weekly during RIBA stage 2 – once a fortnight with the client and in between just as architects. Those meetings were a chance to honestly and positively critique each others’ work and come up with solutions together. However, some underlying issues, as raised by Jeremy Dixon of Dixon Jones, were beyond this group to fully respond to. First, whether the centre of Oxford is indeed the right place for such a large shopping centre and secondly (perhaps more in the architects’ remit) the dilemma of shopping centres, which are inward looking so the outside face is always on the back foot.

The architect’s weekly design charrettes avoided being too technical but brought together a plethora of references from the city, sharing ideas and coming up with elevations, says Simon Fraser of Allies and Morrison. Milestones would be set, such as having the general arrangement drawings by a certain date. Simon Hudspith of Panter Hudspith talked about the value of regular meetings. ‘It is the sheer fear and paranoia of getting it wrong. Some monsters have been built over the last 10 years. We were lucky to have a group of people we could be honest with on something that is, in one sense, very alien to the character of Oxford.’ There were also weekly meetings with the planners on aspects of the scheme, heights, or a particular block say – with different architects pulled in – and over 100 planning conditions to discharge.

Hudspith saw one of the greatest challenges as the condensing of history into one tiny window of development. ‘Consistency and richness grow over time,’ he said. ‘The problem with a development like this is that it has immediate impact.’ The practice attempted to imbue its external section with this chronological depth. And though there is no evidence of such approaches in the other practices’ work the chance to air opinions was essential. ‘It was a forum for bouncing ideas freely, without getting the sack,’ Hudspith explained. ‘We were allowed to develop a confidence that tested concepts.’

This is exactly what BDP’s Coleman had hoped for when the teams were brought together. And at the early stages a minibus out around Oxford to look back into the city from key viewpoints (there were 27) helped the whole team understand the strict limits to the height of the building. Where the architects seem to have worked most visibly together has been in the materials. Places where more joined up thinking might have been useful were in the two covered squares, which architecturally seem to fall between buildings trying to do different things – bridges cross-cutting and a sense of the space somehow bleeding away. The other area that an intense critique might have been able to make more of is the road alongside Westgate. Re-routed for the development, it has up to 150 buses an hour. But since it has bus stops too, with people hopping on and off, the architectural moves here seem formal rather than humane.

So could this orchestrated collaborative process be a template for such largescale city centre designs in future? It seems a positive development following the event-ridden complexity of Liverpool One and its many designers. But it is still not perfect. ‘I don’t think this is a formula that could be applied elsewhere,’ says Coleman. The fact of it being in Oxford and with the planners’ eyes on it strengthened the argument for good design; the detail has had to be held on to. There and in the architectural ambition there was an element of ‘constructive carefulness’, says Dixon. But some fundamental design questions still have to be cracked, says David Henderson of Glenn Howells. There is little to give the outer edges of a shopping centre life, even with housing part of the mix. ‘How to skin deep-plan buildings to generate active frontages is still a question for the future.’

Dixon Jones has given the 1970s shopping centre new life with an Oxford skin of ashlar and rough stone wall visible from the historic Carfax crossroads. The depth of the wall is signalled by a circular cut out while the roofline makes a small claim to the Oxford skyline with a glass sculpture refracting the sunlight. The original pyramid rooflights have been (almost) hidden by a curving ceiling punctuated by circular rooflights. That, with the double height shop fronts, turns this into an arcade that the practice hopes will moderate between the scale of the city and scale of the shopping centre. The firm’s work includes a rotunda ‘object’ building. 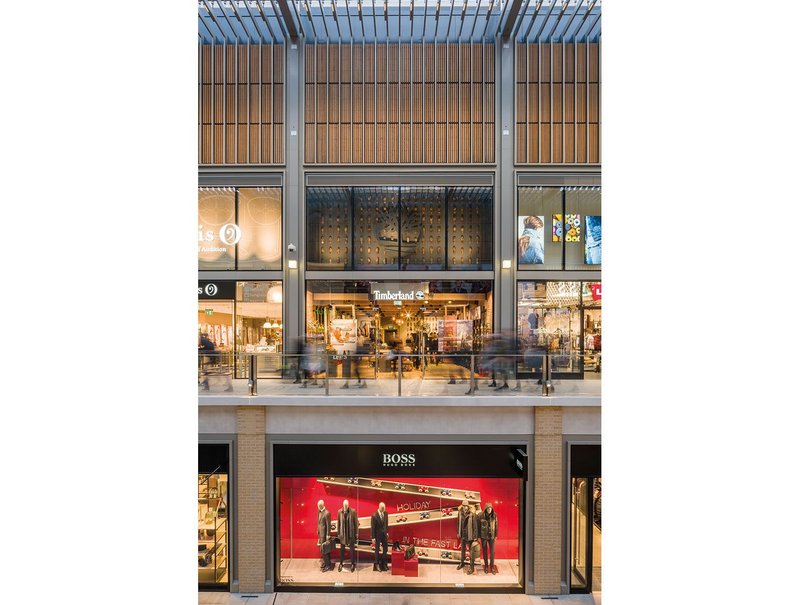 The task of laying out the main ‘street’ of the centre went to Allies and Morrison. On the inside the massing and the retail displays make up the space with timber lengths that wrap up into the ceiling. Outside, one facade is split by string courses into four ‘levels’ to attempt to give a more human scale to the houses next door. The other, onto the bus stops on Castle and Norfolk street, is broken into three nominal ‘buildings’ along its length, the middle section using terracotta fins for variation and venting, while above it the cinema circulation peers out of a glass box. 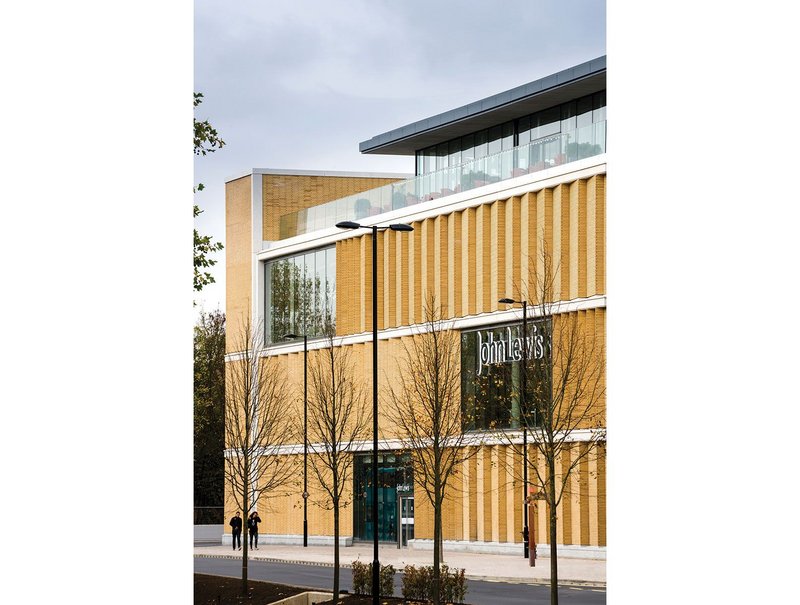 The rooftop restaurant at John Lewis was a late addition

John Lewis stores have been the excuse for dramatic facade treatments in recent years. Here Glenn Howells Architects avoided that and went back to the idea of drapery – in brick. The brick ‘folds’ with their dark mortar are interrupted by bands of string courses in reconstituted stone. The drapery concertinas back on the occasional windows. At the base is a sharply cut granite plinth. 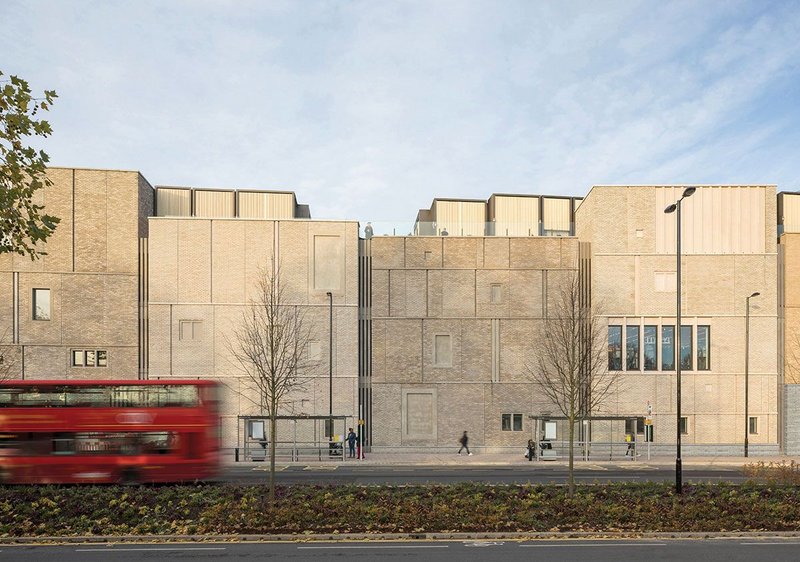 Restaurants on top of the ‘house facade’ are just visible from what is effectively the inner bypass.

Imbuing back of house with character

The block designed by Panter Hudspith was conceived as a series of houses on the outer facades, the St Ives Rustica bricks sorted into different colours and interestingly misaligned string courses. The granite plinth uses a rough cut version which occasionally shifts mode as a bench for a bus stop. Window blanks and the occasional window through to Next enliven the facade and vertical panels separate the ‘houses’. Inside Westgate a first floor colonnade reaching up to the roof modulates the new square while an escalator to its low-level roof top pavilions has a real drama. 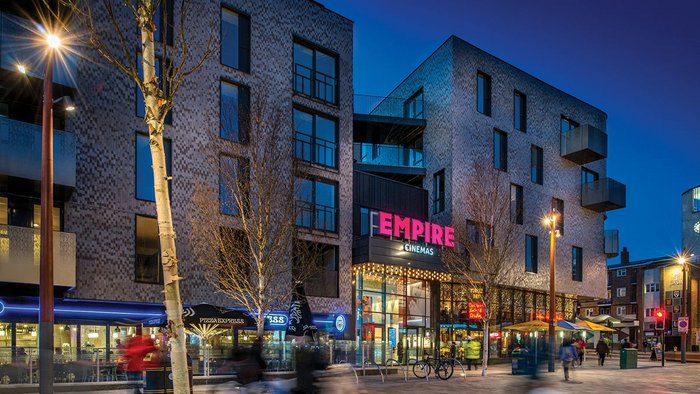 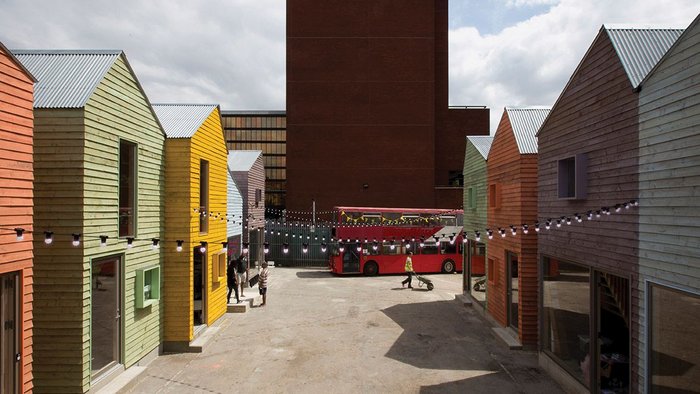 Breath of fresh air – on a budget