A stadium may be packed with individuals but, as RIBAJ Rising Star Declan Sharkey explains, if it’s well designed the space can make the crowd feel and act as one

Authenticity is key for every architect and designer. Of course, we all have (sometimes wildly) different definitions and interpretations of what constitutes ‘authenticity’, but I think we are all probably closer together than we think. Or like to think, perhaps, given the competitive nature of our industry. For me, an authentic experience is one that translates the feelings of togetherness and cohesiveness of a collective of individuals – whether it be two, 1,000 or 100,000 people – into a very particular place or space.

It is that collectivity that creates opportunity, but also confusion. How do individual notions of an authentic experience combine, merge or collate? From my own experience in sports and entertainment design, the difficulty of finding one authenticity to represent to thousands or even millions of individuals with their own perspectives is often the biggest challenge. When large groups of people gather to watch an event (whether sporting, musical or perhaps a developing field like eSports) or to travel (in airports and train stations), or even to learn (in schools or universities), the individual and the collective are in sharp focus.

Very few attendees of a 60,000-seat stadium or a 10,000-capacity arena will have ever met before – or indeed will meet again – but that doesn’t stop them becoming a ­community rather than simply a collective of individuals in that moment, watching that live event.

If you have been to a fantastic gig, or a great match, you will have felt the crowd rise, react, and in that moment, come together as a community

In the moments when being a new parent allows, I’ve spent time thinking about how a community forms, and dissipates, in a space in just a matter of hours, or even minutes. The anthropologist Victor Turner has talked about this phenomenon, albeit in less populous terms, in his exploration of ‘communitas’ and ‘liminality’; when individuals are removed from their everyday societal structures of living and are drawn together as a community through a ‘moment of magic’. If you have been lucky enough to go to a fantastic gig, or a great match, you will have felt the crowd rise, react, and in that moment, come together as a community. It is those moments, I think, that designers strive for.

What we can do as designers to achieve this is to plan spaces and places that allow that moment to occur. For example, the experience of the supporter is always at the heart of a stadium designed by Populous, and is expressed in key ways including the approach, the discovery, and the intensity of the game or event. The best buildings and venues are both natural conduits and amplifiers of the experience, of the moment that is brought to life by whatever is on show.

Another interesting and vital component of the communitas theory is that it is not static, but moves flexibly in time and space. As occurs through all generations, a cultural shift is affecting the business of sport, and the communities that surround it. As we move from ‘Gen Y’ to ‘Gen Z’, we are moving from a generation that loves to document life experiences to a Snapchat and Instagram Story generation who want to share experiences as they happen. It’s a generation that wants to be ‘present’ both physically and digitally. The game of the future will be a local portal to a wider global community, and it will be instant.

So this is a call for the authentic. For all architects and designers and creatives to seek out that ‘moment of magic’ that links architecture and people. It is hard of course, but it’s worth it.

Declan Sharkey is a principal at Populous 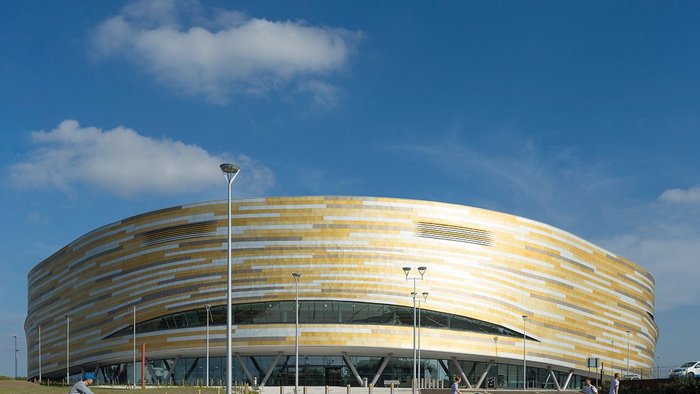