A thin concrete dome the size of the Lovell radio telescope forms the visitor centre, museum and exhibition gallery at Jodrell Bank. Its designers reveal how it was conceived and executed

Julian Gitsham, principal at architect Hassell Studio, and Christopher Matthews, associate director at structural engineer Atelier One, explain the philosophy and structural engineering behind the concrete domed roof of the First Light Pavilion at Jodrell Bank, home of the famous Lovell radio telescope.

What was the thinking behind the creation of a domed pavilion at Jodrell Bank?

Julian Gitsham: This building is a visitor centre, a museum and an exhibition space to tell the story of Jodrell Bank and of radio astronomy; it is the first place that visitors arrive at. The idea was for the building to connect time, the earth and the sky. We also wanted it to be a landform and for people to be able to assemble on top of it to take in the views – even though you cannot build above a certain height to prevent interfering with the telescope.

We worked with Atelier One and exhibition designer Casson Mann from the very beginning. We conceived the dome as a concrete shell to maximise flexibility for the exhibition design. It is super-thin, super-high-performing and it is 76.2m diameter including the earth berm, which is exactly the same diameter as the dish of the Lovell telescope.

Describe the form of the building

JG: We orientated the entrance directly south because Teresa Anderson, the director of Jodrell Bank Centre for Engagement, wanted it to have a meridian line slot at local astronomical noon. It lines up directly with the meridian line.

We wanted the aesthetic to be pared back with nothing superfluous – exposed concrete walls and concrete floor; it's the same functional approach Lovell took with the telescope. The domed roof is formed from a 200mm slab, an insulation layer, a drainage layer, and then the soil build-up with the green roof on top. The building is single storey.

The team at Hassell and I worked closely with Casson Mann on the flow of visitors. The idea is that on entering the building visitors are orientated through the exhibition design and into the space dome auditorium, which is like a massive planetarium. You leave the building on the trajectory of the sling shot of Apollo 11 around the moon, which directs you to the Lovell Telescope. Plant is housed in a cut-out at the back of the mound while the café is in a cut-out on the east.

Is the dome a shell-structure?

Christopher Matthews: It’s basically a thin-form concrete shell structure. If you had a perfect dome with a perfect boundary [and no cut-outs] with a ring-beam around the base you could have built it with no internal supports. What we've ended up doing with this dome, which is quite rare, is have it working partly as a self-supporting dome and partly as a bending stiff structure by supporting it on the curved central wall that runs between the auditorium and the main exhibition space. Professor John Chilton from University of Nottingham advised us from his knowledge of past shell structures, giving us a potted guide of the pitfalls of dome design.

CM: Burying the building makes it ideal for a dome form and that lends itself to concrete. Our aim was then to minimise the volume of concrete required. The overall roof diameter is 50m, but the maximum span between supporting walls is 20m. Because the concrete roof works predominantly as a dome, the thickness of the roof slab was only 200mm which, considering we've got 20m spans, is remarkable.

Is the concrete reinforced?

What foundations does the building have?

CM: If we'd been able to use piles to take the high trust forces at the edge of the dome then it would have been easy but, because the site is almost a bog with a very high water table and very soft soil, we had to design the floor of the building to act as a giant raft.

The concrete roof, concrete supporting walls and concrete floor are all tied together; the walls pull the roof inwards and then the floor structure ties the whole thing together so that the entire building is one contiguous structure. That means you have to consider the entire envelope as one to be able to show that it works, which is why it is actually tricky to analyse.

How was the roof constructed?

CM: We did the engineering up to RIBA Stage 4 and then main contractor Kier delivered the final construction drawings. Because we designed this as a monolithic structure you couldn't have any movement joints so Kier had to be very careful about the prevention of cracks as the concrete set and shrank.

Kier cast the dome on a mould of CNC cut polystyrene void formers placed on a scaffolding deck. The entire roof was cast in one continuous pour to prevent shrinkage cracking. They started at 7am and managed to pour 381m3 of concrete in one day, which was remarkable. Kier not only managed to get the thickness constant but by using a team of sweepers and polishers as they poured they also gave the roof an amazingly uniform finish. 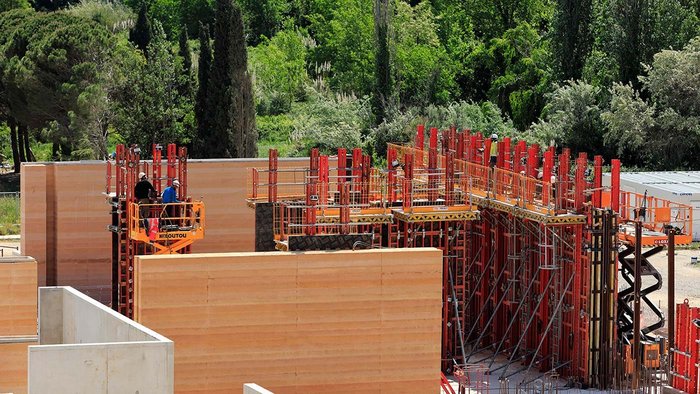