The industry is still positive, but the statistics are a bit downbeat. What does this apparent contradiction mean?

Chat to most architects, builders or construction professionals and they’ll tell you they’re busy, if not very busy. Suggesting there’s no growth in construction or raising concerns over the industry’s prospects would probably raise more than a few eyebrows.

But the official data suggests growth in the industry is pretty much flat. Is it too gloomy? Is there cause for concern?

Inevitably the answers to these questions vary according to the time frame and the sector of the industry. But looking at things from various angles should provide useful clues.

It’s most often wise to start by looking at the wider context. Broadly this means the economy, which is key to growth in construction and the workload of architects, and here there are reasons for tempering optimism.

Not bad, but not so good

For those closely watching the data it’s been a bit gloomy of late, with a few exceptions. Employment figures remain positive and the latest revisions to gross domestic product suggest that economic growth in 2015 was higher than previously thought (up from 2.2% to 2.3%). However, worrying signs are emerging in the economic data. After earlier hints at improvement, the latest figures show productivity dropped again from the third to fourth quarter of 2015, putting the level below that in the final quarter of 2007 (Chart 1).

Meanwhile, the latest figures for both trade and output from the production industries add more unease. These suggest the UK is drifting ever further from the post-crash aspiration of a more balanced economy better able to cope with external headwinds.

For a trading nation like the UK the global economy matters a lot. So these data all need to be considered within the context of growing concern over a slowing global economy, with the economics group OECD most recently putting the tag ‘easing growth’ on most major economies. Add to this the uncertainty created by the EU referendum.

This may all seem distant, but it does matter to construction. Uncertainty and knocks to confidence feed into investors’ calculations and lead to decisions being deferred. This may affect not today’s work but that of the future. It can also hit the workload of architects more rapidly than that of others working within the built environment.

It’s worth noting that the Bank of England Agents’ summary of business conditions published in March mentions that investment intentions had generally eased as a result of heightened global uncertainty.

So while the context doesn’t spell doom and gloom, it isn’t brilliant. But how well is the industry actually doing at the moment?

The official data comes from surveys of contractors, as do many of the other data that grab the headlines – the monthly Markit/CIPS indicator for instance (Chart 2). In March this index was once again at the same relatively low level as a month earlier, adding further evidence that construction is growing more slowly than at any time since the summer of 2013. The Markit/CIPS ­survey points to weakening house building as the main reason for softness, although civil ­engineering and commercial building work is also experiencing slower growth than it was two years ago. The chart also includes the Bank of England’s take on activity in construction, which tracks a similar path.

Experian’s leading activity indicator uses a range of data to generate a projection of construction activity over the coming three months. This again shows a pattern of slowing growth, substantially lower than a year or so ago (Chart 3). It points to weak growth at best across residential and non-residential building and a fall in civil engineering work.

What emerges from these independent data is that, while they may be a little more upbeat, they broadly fit the picture painted by the ONS construction output data of little or no growth over recent months.

It’s always well worth looking at construction from different angles. Casting the net wider we can turn to data on the supply of building materials to provide an alternative insight into construction activity.

The Construction Products Association state of trade survey for the first quarter of 2016, released early last month, does appear to support the view of slowing growth seen from the contractor-based surveys (Chart 4). On balance, the manufacturers surveyed continued to report increasing sales, suggesting construction activity is still expanding: similar to the contractor-based trade surveys.

The Builders Merchant Federation introduced a new survey last year. It is early days, with just 18 months of data it should be treated with some caution. But when seasonal fluctuations are taken into account it too seems to point to only modest growth. Sales in cash terms over the final quarter of 2015 were almost 3% up on a year earlier, but when adjusted for inflation and trading days, the BMF suggests sales volumes rose about 1%.

The Department for Business, Innovation & Skills also provides data on building materials, including how much is delivered. Among these are data on deliveries of ready-mixed concrete and bricks and blocks.

Naturally changes in the level of ready-mixed concrete will be as influenced by the change in mix of work as in the total level of construction. But there is a reasonable correlation – especially if we factor in a lag of three months or so – with changes in the amount of private non-residential work. The pattern seems fairly positive, with sales on an upward path, growing about 6% in 2015 (Chart 5).

Reading between the lines

There are plausible and interesting explanations for this divergence, too elaborate to go into any depth here. You’d need to look at the effects of the shortage of facing bricks a few years back on the design and planning for new homes being built. You’d also have to consider the relative impact of imports and the ebb and flow of where homes are being built.

What we should take away from this final chart is a need for diligence when interpreting individual sets of data, in that sometimes the links we might imagine between one variable and another can break down. This does not necessarily undermine the value of the data. It just means it could be telling us something unexpected. That can be very useful.

Taking all the above into account, there does seem to be a mismatch between experiences on the ground and the data. Growth is flagging. Firms are busy.

This doesn’t mean there’s a problem with the data. Broadly they suggest the same thing. The answer to the mismatch probably lies in the road travelled.

The recession ripped at the industry’s resources over many years and since 2012 a depleted construction industry workforce, associated professionals and suppliers have had to produce 13% more output. This is quite enough growth to leave many firms stretched and hard pressed to maintain current workloads, let alone service further growth.

Furthermore, growth is inevitably spread far from evenly, both across sectors and geographically. Experiences within the industry will be varied. There may well be many firms who have never had it so good.

So it’s little wonder that most people both in design offices and on site are still very busy. 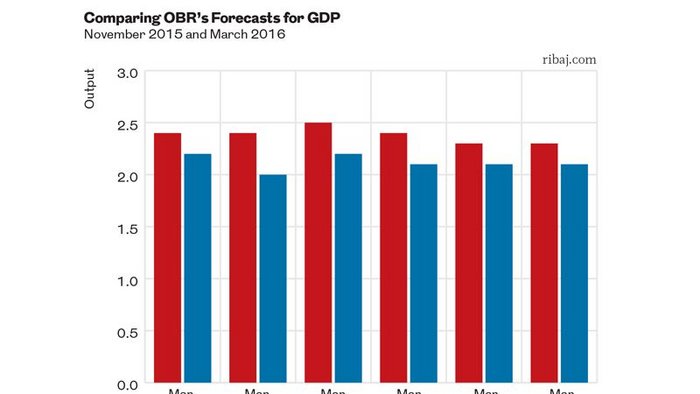