If keeping track of newbuild homes is difficult, staying abreast of the fast-changing sector requires attention – and insight

There’s a management maxim that goes: ‘If you can’t measure it, you can’t improve it.’

Housing comes in big and expensive units. Houses don’t move – normally. They have unique identifiers (addresses). Despite all this we struggle to count the number of new homes we build with any accuracy or timeliness.

We count car production with relative precision, timeliness and detail: by model and manufacturer. We probably measure the production of Marmite better than we do housing. It seems on that score improvements have been sluggish since the Domesday Book was put together best part of a millennium ago.

It’s an issue appreciated within the circle of statisticians and analysts working in the field. The problem is more obvious in England, where there are two counts of new homes that of late have varied widely. The annual gap over the past 10 years has been as large as 24% between the regularly-used quarterly measure of homes built in England and the less timely (and we surmise more accurate) net-supply figures for new homes built. Both are produced by DCLG.

The problem becomes worse when we try to measure new public housing, compared with new private housing. The recorded split is, currently, at best indicative. At worst, it is meaningless. 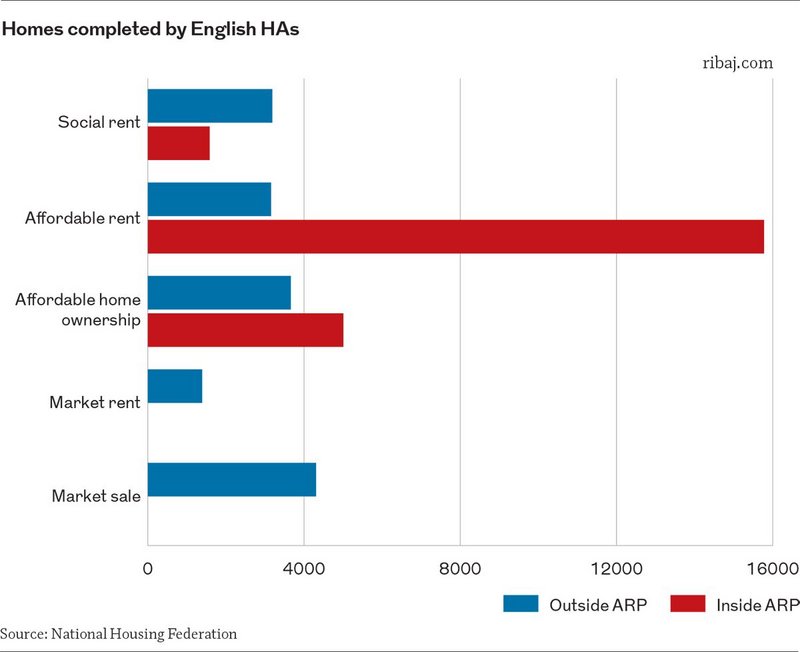 Meanwhile, the definitions and concepts that divide housing tenures have mutated and blurred dramatically over recent years. The statistical challenge is made tougher when trying to compare data across the UK, which tends to require pulling together dispersed information collected separately and not necessarily congruently for the devolved nations.

Statistically, while science is applied, collating numbers on house building has become more of an art. It makes market analysis of housing fraught – particularly when we look to separate out social house building, despite that sector having its own additional arrays of statistics. Like-for-like comparisons are compromised, making detailed analysis both tough and suspect.

OK. All very interesting. But what does it mean for architects?

Not being able to count what we do in housing clearly hampers our ability to improve it, or at least to know that we are improving it.

Yet, oddly, some of the factors that lie behind this mish-mash of confusion in the numbers are probably dealing some trump cards to architects. But we’ll come to that later.

First, some background is required and we need to separate out two pertinent things: the actions of the social housing providers and the act of building social housing. While there is a big overlap, they do not cover the same ground.

The role of housing associations, which represent the bulk of the private registered providers (PRPs) that deliver most of the social housing stock, has become broader and less clear cut.

For the record, the 1,760 registered providers in England include 1,524 non-profit organisations, 198 local authorities, and 38 for-profit companies. Many of these are formed as groups, but these groups often include operations that are not on the register. 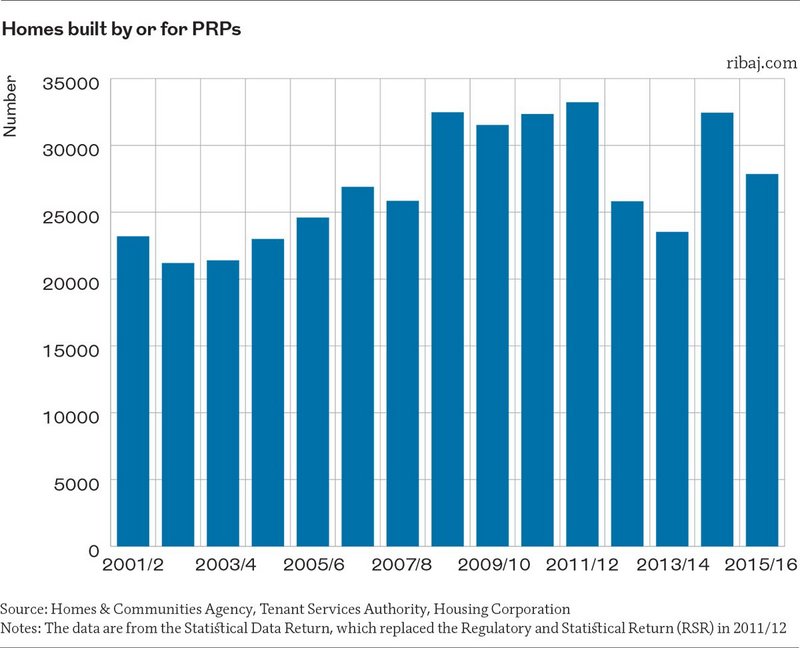 In recent years, housing associations have greatly increased their delivery of new homes for open-market sale and market rent, using the profits to cross-subsidise social housing activities rather than grants. There have been mergers and then mega-mergers, creating huge groups that include more than just the operations with functions that we might associate with their traditional non-profit work.

Importantly, these organisations, notably the big housing associations groups, are increasingly both competing with major house builders and working in joint venture with them (it’s worth noting that joint ventures add another layer of complexity to the problem of counting new homes built).

L&Q stands out as an example. One of the larger housing association groups, it builds over 1,000 private sector homes. Add the homes it builds for itself, around 1,500, and the organisation stands pretty much on a par with a major private-sector house builder the scale of, say, Countryside. Take into account its recent merger with fellow housing association East Thames, its purchase of Gallagher Estates – providing a massive landbank – and its desire to spread its wings beyond London (entering a joint venture with Trafford Housing Trust to build 2,000 homes in the North West), and it becomes very clear that it has the potential for significant further expansion.

This would be a massive leap from the 40,000 or so English housing associations currently build, and a huge transformation of the house-building landscape. 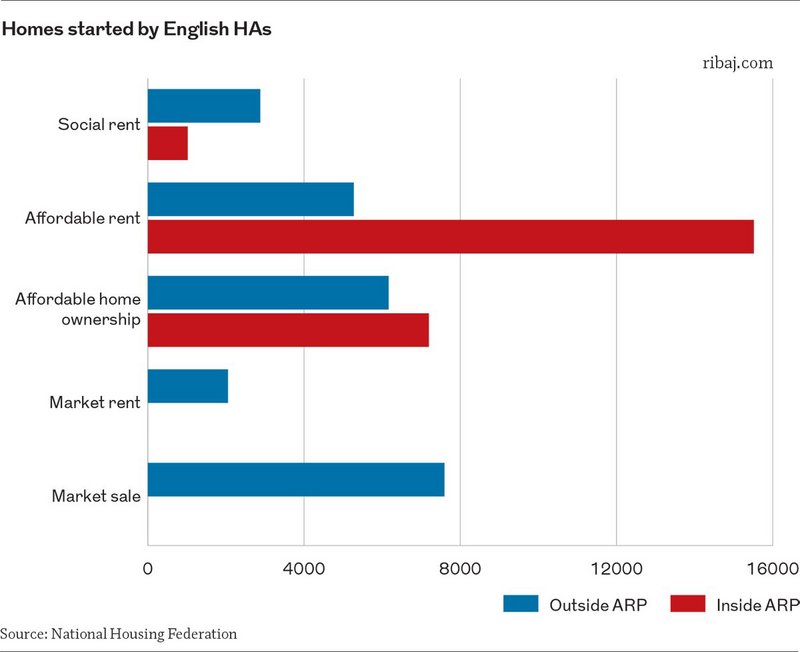 While impressive, these completions were down from 40,124 in 2015/16, partly due to the transition to the Affordable Housing Programmes.

Chart 2 shows the pattern of growth over time in the newly-built homes by PRPs as recorded by the Homes & Communities Agency from the Statutory Data Returns (which replaced the Regulatory and Statistical Return in 2012/12) of PRPs. This provides some guide to the level of social housing that is supported by the government, in England at least. But it’s not just a numbers game, the constituent elements are shifting – less ‘social renting’ and more ‘affordable rent’, which demands lower levels of support.

What about the future?

The Construction Products Association does provide a forecast for both starts and completions of public housing, based on the DCLG figures. This covers Great Britain, not just England. While subject to the caveats above, although the level may be questionable, the direction of travel is what is important. From Chart 4 we see that the prospects in the eyes of expert forecasters is for growth. It is, though, well worth noting that the lower scenario does point quite steeply downward, suggesting the downside risks are more potent than the upside.

From the perspective of architects that should be good news. But what makes the sector more interesting is the fuzziness over definitions and the blurring of tenures.

Looked at as clients, housing associations have tended to be more commissioners of housing for their stock, rather than developers across an array of tenures. This has changed.

But the important bit is that while housing associations may progressively be operating in the market sector, financially and culturally they are different to traditional private-sector house builders. They operate a very different business model to traditional house builders – they have a huge stock and both sell and hold onto homes they build. The blend of tenures within their developments is likely to be different at the outset and as the market shifts the mix may well follow, with falling sales, say, leading to more homes taken into stock. 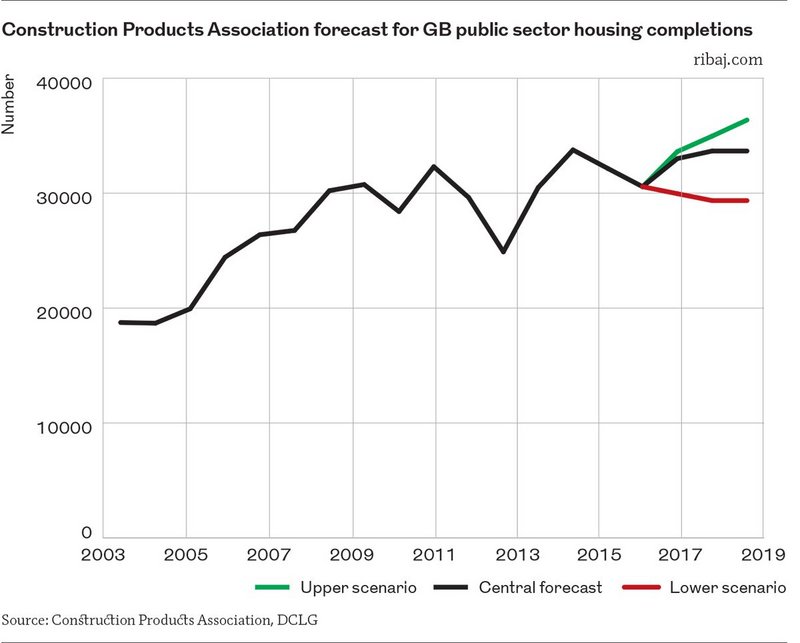 When it comes to product and production, there is less reason for housing association groups to hold fast to the approaches taken by mainstream major house builders. Being less reliant on selling homes sequentially to meet local market demand, housing associations can be far more open to adopting less traditional house-building techniques that deliver faster build rates – MMC, prefabrication or any descriptive permutation of the concept.

Because they will inherit the maintenance on a large proportion of the stock they build, they will be more vexed by future maintenance problems and so design accordingly. Because they see themselves as very much stakeholders within their communities they will be far more alert to the public realm and the social infrastructure. These factors will form both the practical and cultural approach they take to design.

There are concerns about the commercialisation of housing associations, such as the increased financial risks and the potential for some nasty side effects in a market downturn. These should not be ignored. For all that, the greater engagement of housing associations brings different financial, business, social and tenure models to the table. This is likely to alter the landscape for architects.

The different approach to delivering houses that is likely to emerge from this, which one might assume will grow in importance, seems likely both to test the talents of architects and to provide opportunities. The blurring of the lines between social and private housing, the muddle and flexibility in tenures, indeed many of the things that make collecting sensible statistics difficult, provide an intriguing opening for smart designers with innovative instincts.

If there is a central role for architects in the development of housing it is to design spaces that match the needs of the residents. Beyond this, architects clearly need to take account of commercial and practical aspects, such as the client’s financial and business objectives, the resources available and the technical challenges. Ethically and intellectually they need to account for the impact that homes will have on the local environment and how they will survive the test of history.

The relatively clear-cut assumptions that underpinned the distinctions between privately and publicly-built homes are no long as distinct today – if they are distinct at all. This should leave far more room for the architect to consider with less constraint all the user, commercial, technical, environmental and ethical factors to emerge with a design that best maximises and balances all these competing forces.

We may be worse at counting social housing, but greater scope seems to be emerging: potential, at least, for architects to improve not just that which falls into the public or social category, but to improve housing overall.

Naturally there will be a counter perspective. But to return to that point on history and its importance, here’s one stat to leave you with. Over the past 10 years in England we have demolished each year less than one home in 1,000. To demolish our entire stock at that rate would take more than 1,500 years. That seems to make the legacy we bequeath, not just to one future generation but to many generations, an issue of some significance.