As the population gets older, our housebuilding remains out of sync with what people need. And issues extend to the built environment as a whole. Brian Green looks at what architects should be thinking about – now 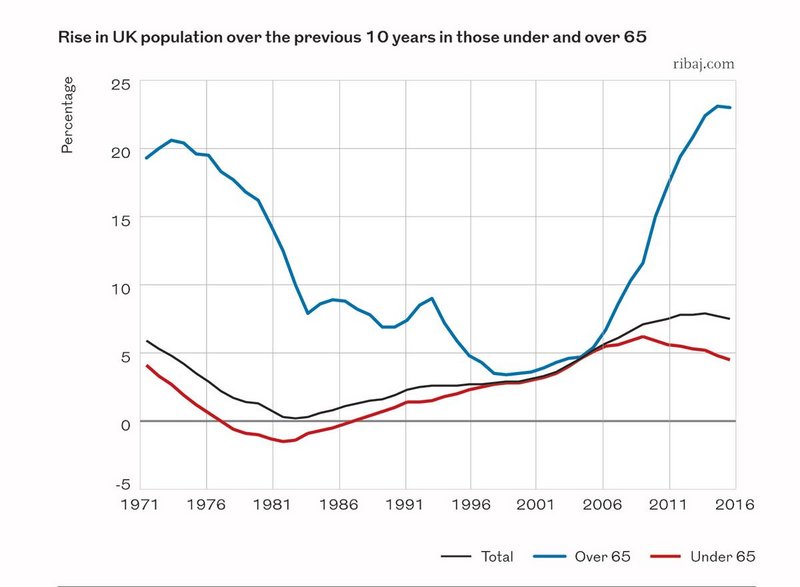 The debate about an ageing population feels like an old chestnut. We all know people are living longer. But in an epoch of rapid change on political, economic, social, and technological fronts, it is easy to lose sight of the potency of a creeping challenge.

Huge transformations are under way but still have a long way to run. Yet signs of stress caused by an ageing population are already showing while we adopt the normal procrastination with which we so often treat long-term mega trends. For those connected with transforming the built environment to match peoples’ needs, delay simply raises the bar that must eventually be jumped.

Buildings and infrastructure last for decades. They embody the lifestyles and thinking of the past. The refresh rate can be glacially slow, with construction struggling to keep pace when economic and demographic shifts accelerate.

Today we are experiencing demographic distortions on a scale never seen before. Huge changes are occurring globally, nationally, regionally, and locally at an accelerating pace. This poses a major question that needs answering with urgency. How do we recast the world to meet the needs of an ageing population?

Answering that question has become both tougher and more urgent with the effects of the pandemic highlighting the vulnerability of the elderly. Meanwhile, for the UK, a fully-fledged Brexit in a few days’ time will leave far less wiggle room.

For architects, whose role it is to shape the built environment, this poses a huge challenge. Many are already grappling with the multiple factors at play that must be appreciated if we are to reshape buildings, infrastructure, and public spaces positively for the future.

But while it’s getting harder to miss the scale and urgency of the task ahead, this also presents a huge opportunity for architects at a time when many may be wondering what lies ahead for the profession.

Chart 1 shows the 10-year growth rate in people in the UK aged above and below 65. What might surprise is that either side of the millennium the growth rates in the 65+ age group (on this measure) reasonably balances growth among the under 65s.

Inevitably demographic quirks play a part. But two world wars and two economic depressions between 1914 and 1945 narrowed the numbers reaching 65 between 1979 to 2010. While these suppressed growth in over 65s, from the mid-1990s inward migration, mainly from Europe, helped fill a hole in younger adults that would have formed after the birth rate slumped in the 1970s.

Without inward migration the ratio of retirees to those working would have risen faster, putting stress on the economy. The UK old-age dependency ratio, as it is called, has steadily increased over 50 to 60 years, though tempered by both migration and raising the pension age. But it is set to surge.

This clearly has huge economic effects, with a heavier burden placed on the workforce to support more older people. But the ratio also encapsulates an important demographic shift which has huge implications for the needs within a society and the shape of its built environment. We can only get away with so much with claims that ‘70 is the new 65’, however well founded that might be. 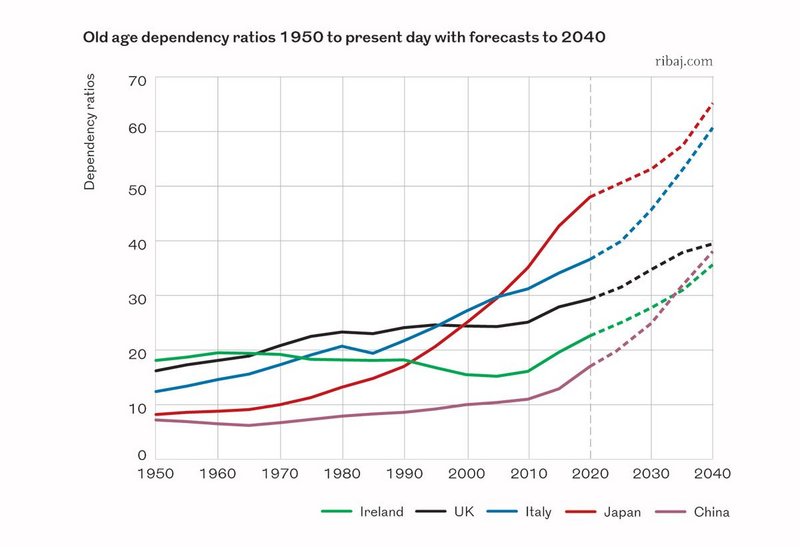 Intriguingly, Ireland in 1950 topped the table internationally. But lest we forget, it was losing youth to emigration as its population steadily declined for more than a century. This shows how migration is a critical factor. Japan’s population has both aged and shrunk over the past decade. Historically it has seen very low inward migration – quietly encouraged, perhaps, but this is turning. It has recently seen record levels of inward migration, although the figure is still low by international standards.

So, what has all this to do with the UK building stock and what we should be building?

Plenty. A nation’s buildings, public spaces, and infrastructure should reflect the needs of the population. As things stand, the UK population is in the throes of rapid transformation with change in the built environment increasingly out of sync.

Charts 1 & 2 show how the trend to an older population has accelerated. And the projections suggest a rate of growth in those 65 or older continuing to expand at a rate of 20% each decade. Assuming Brexit was as much about ‘curbing immigration’ as ‘sovereignty’, we face slower inward migration.

The result will be fewer workers supporting ever more older people creating a drag on the economy. This then threatens to restrict the resources needed for reshaping the built environment to lessen the economic burden of an ageing society. And vital reconstruction is needed so older citizens can be more self-supporting, more productive, and where necessary cared for more easily. Social and moral issues aside, this is an economic imperative.

There are so many mismatches between the built environment we have and the one we need. But the gap is most evident in the housing stock.

The mix of housing types today is if anything more dominated by larger family housing than it was in the 1970s, despite families being smaller, there being more single-person households and the proportion of the population over 65 having risen from 13% in 1970 to 18% – and expected to rise even further to 22% by 2040. 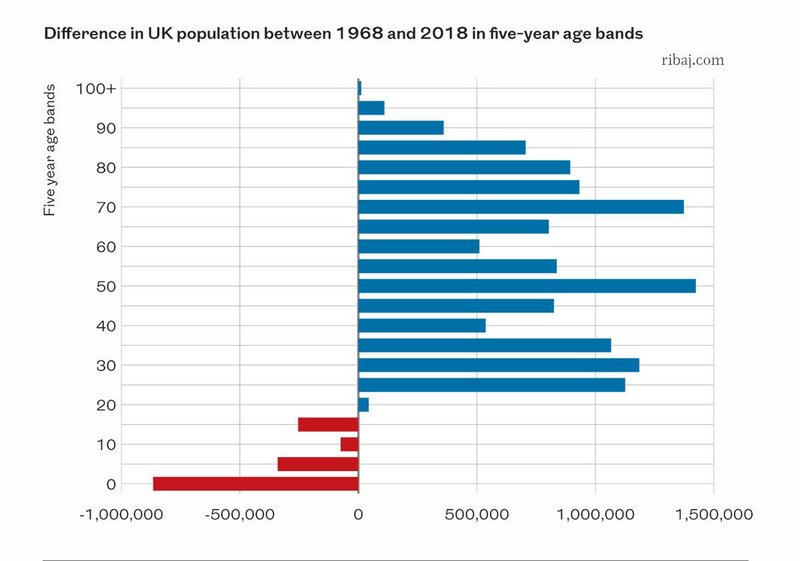 Chart 3 shows how over half a century the number of children has dropped by 1.5 million while the number of people 65+ has grown by 5 million. Furthermore the 65+ population in the UK is expected to expand by 5 million more in 25 years’ time. In England alone, the government projects that there will be 3.7 million more households created between 2018 and 2043; 84% of this growth will come from households headed by someone 65 or older, most of them will be single adults or couples.

These effects are not evenly spread. The UK median age is just above 40. But in North Norfolk today there are as many people aged above 54 as there are below it. That median age was 42 in 1990 and little above 40 throughout the 1970s and 80s.

If we look at the new stock built over the past 20 years there have been lots of flats built in cities, often to accommodate swelling numbers of young professionals. But the emphasis has been mainly on family houses with three, four or more bedrooms. 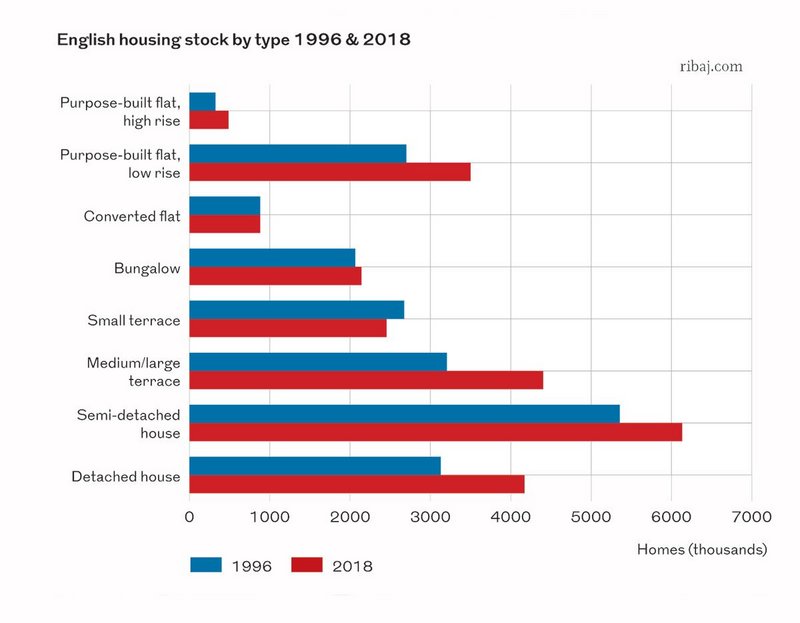 Chart 4 shows the change in the English housing stock by broad types between 1996 and 2018. It shows how most of the growth has come from more, bigger homes. Other data shows that at least 80% of the new houses built had three bedrooms or more. Even including the flats well over half of all new homes had three bedrooms, with close to 90% of homes having at least two. That occurred even though around 70% of new households were people living alone or were couples without children.

Bedrooms may not provide a perfect measure of what is needed. But the figures support a general view that the homes built in recent years better match the past than the future. The demographics and the future shape of the population may be very different from 50 years ago, but by and large we are building much the same types of homes.

There is a strong argument to suggest the built environment is becoming increasingly less relevant to the demographics of the population and a stronger argument that it is failing to respond to future needs. There are nods to retirement homes and nods to life-time homes that are flexible enough over time to accommodate a more diverse range of age groups. But the challenge runs deeper, involving not just buildings, but the infrastructure and public spaces that link them.

But even within housing the ageing population represents a bigger challenge. As the Home and Dry report published earlier this year by the Centre for Ageing Better points out, in England alone there are 4.3 million homes that fall short of basic standards of decency. They gobble energy to heat and present serious health hazards to their occupants. Around half of these are homes to people over 55 years old. What’s more, many are significantly underoccupied at a time when there is a housing shortage.

There is a clear challenge to create homes that are both enticing and affordable to older people. This could release family housing to those who need it and are able to improve it to higher standards. It would create safe houses in which older people could live more securely and self-sufficiently and adapt as they become less so.

The pandemic has exposed the vulnerability of the elderly. It has elevated the value of homes. A far larger proportion of the UK population is entering retirement and this trend will continue to stress resources. With Brexit likely to restrict the flow of younger workers from abroad to support those moving into retirement, the need to improve the housing stock is urgent.

There is no simple silver-bullet solution. The answers to the problem will vary place to place. And while it is a challenge for everyone, demographic change poses different questions for different people. But for architects this offers an opportunity to shine.

Find out more about building for the older generation with the RIBA’s report, Homes for the Ages