The ubiquity of the word ‘uncertainty’ in economic news and analysis tells its own story. No wonder construction activity is stuttering

The words ‘uncertain’ or ‘uncertainty’ crop up 70 times in the latest Construction Products Association summer forecast for the industry. In the same document of 2015 you’d have found 22 instances, mostly linked to whether the Greek debt crisis would tip the Eurozone into crisis. That minor problem.

There’s another important difference between the 2015 and 2017 documents. In the former, the CPA produced a projection that went two years beyond the normal three-year forecast. A similar two-year projection is absent from the latest forecast, with the numbers running up to 2019 – Brexit year – and no further.

Sightlines into the future are so fuzzy that being bold enough to suggest where construction might be in 2021 is clearly a step too far. 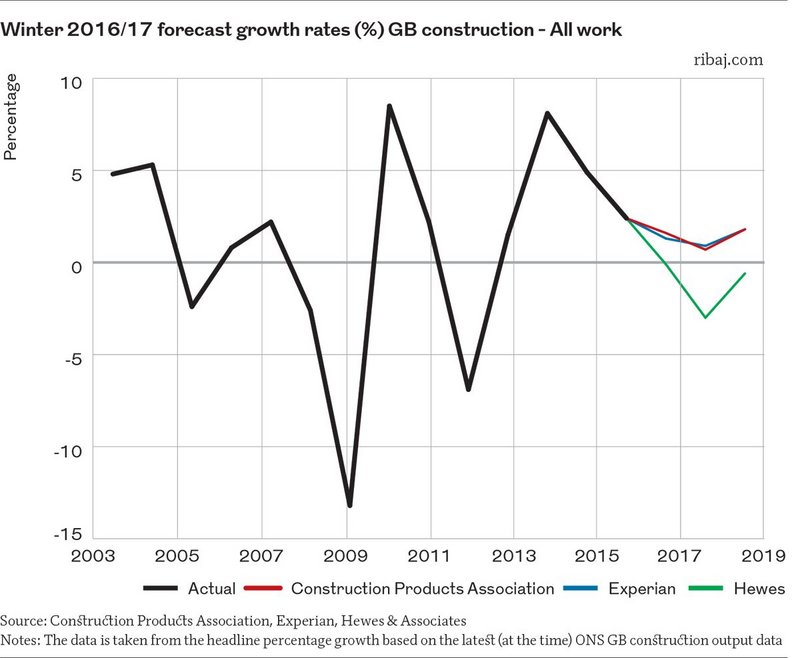 For the record, CPA’s 2015 projection of industry activity in 2019 was almost 9% higher than it now expects. It was then forecasting annual growth in the years 2017 to 2019 consistently above 3.5%. It now expects growth consistently below 1.8%.

Expectations for construction activity have declined increasingly and the mood has become ever more sombre as we meander and wobble towards the EU exit. All the pointers to where construction is heading appear to be weakening. They are certainly much weaker than we might have expected in those more certain days of 2015, with a newly installed majority government.

The point to note is that the industry is flirting with recession in 2018. The consensus is that it may well be avoided, but it is touch and go. 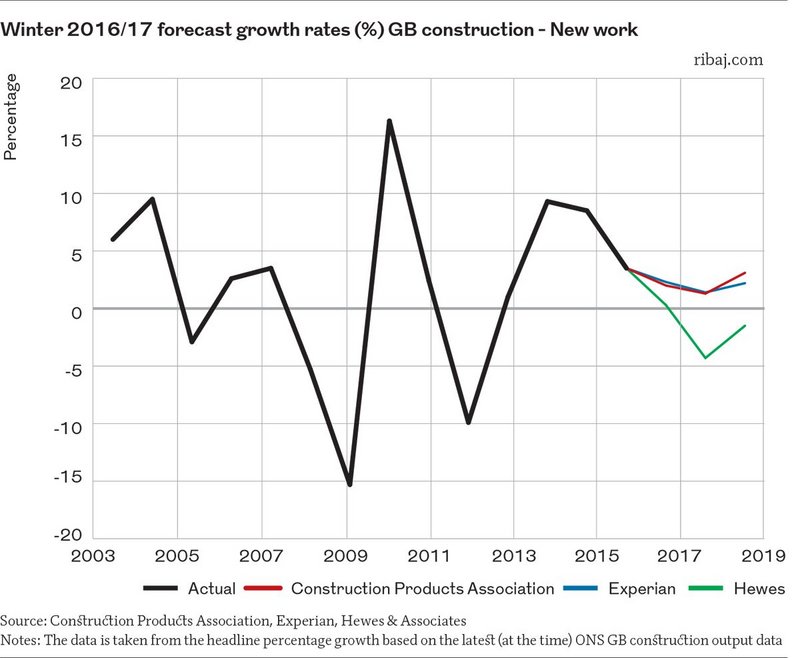 Looking at a batch of the main indicators for construction the weakening is clear, not least in the primary measure, ONS construction output. Chart 3 illustrates the decline in activity so far this year.

It is important to understand that these are first estimates and the shape of the chart will change over time. Recently the revisions have tended to be upward, but there is no guarantee of that. Some large revisions are expected later this year.

Leaving that technical detail to one side, the inescapable reality is that growth has faltered in recent months and now activity appears to be in decline. 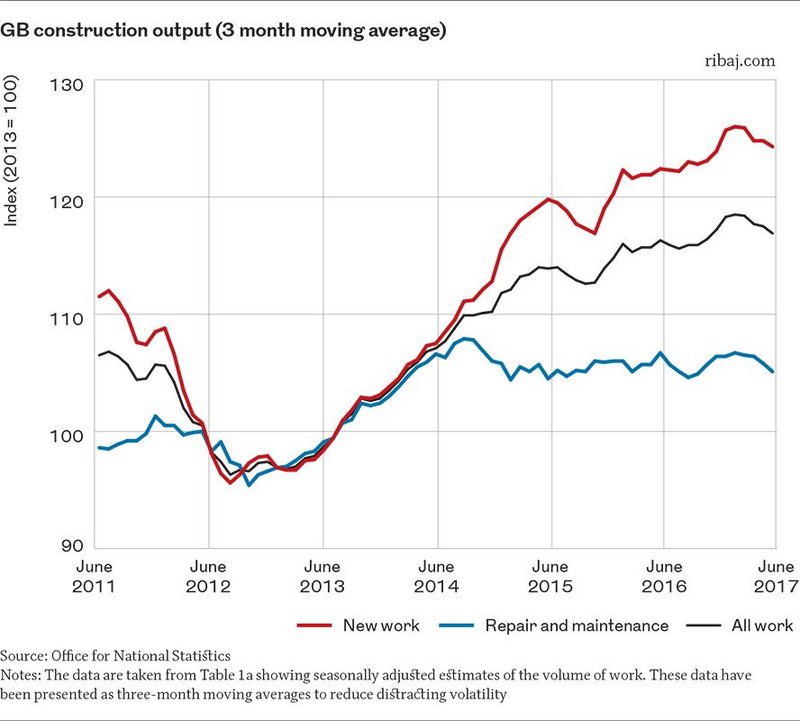 The Markit/CIPS monthly indicator we see in Chart 4 fell to its lowest point – 51.9 in July from 54.8 in June – since the announcement of the EU referendum vote took markets by surprise. It still suggests growth in the sector, but that growth is slowing and has fallen to fairly meagre levels.

That it suggests continued growth whereas the ONS construction output figure suggests a fall should be treated cautiously. The sharp and immediate dip in the Markit/CIPS measure after the referendum is a signal that sentiment plays a strong role in this indicator. The vote itself did not lead to an immediate drop in work on site, so it cannot be seen as a fully reliable measure of actual activity.

The indicator is also thought to be subject, as most surveys are, to bias. In this case it might be survivor bias (poorer firms falling out and stronger firms remaining) leading to overinflation in the recorded scores. Tracking the indicator over time does hint that construction growth in the real world may be a bit above the no-change mark of 50 recorded.

That does not undermine its value as an indicator. The key point to take from the Markit/CIPS indicator is the direction of travel, which suggests lower growth. The Bank of England agents’ scores seem to be pointing in a similar direction, although the latest data suggests conditions are more stable at a modest level of 1.2, which has been the score since April. 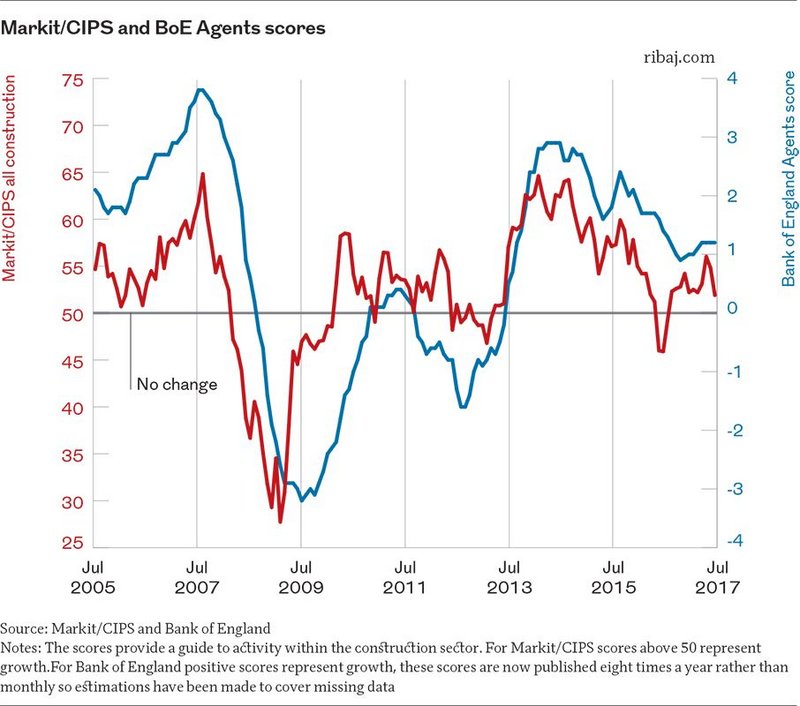 Again the RICS construction sector survey, which presents itself as a sentiment indicator, points to a weakening in growth. Again the word uncertainty crops up, this time in the headline to the commentary, appearing 30 times in the bulletin, including in more than one in five of the short comments from respondents. The commentary suggests a broad-based deceleration (Chart 5).

Financial constraints, which have increased, were reported to be the biggest limit on growth. For this quarter’s survey RICS added a supplementary question to shed light on the issue. The finding was: ‘Economic uncertainty driven largely by Brexit and the subsequent election result was identified as the primary cause of the constraint.’

Geographically the survey suggests that sentiment over the quarter was most resilient in the Midlands and North of England, while in London it was hit hard. But the pattern quarter to quarter is skittish, with what appear to be large mood swings.

This skittishness is evident in other surveys. This is hardly surprising given that the government itself is reported to be unclear of its position on so many elements of the Brexit negotiations. Small snippets of information can have quite a large impact on sentiments in sectors of the economy.

The survey produced by the FMB, which represents local builders, also displays volatility, both in the recording of actual work and in expectations. 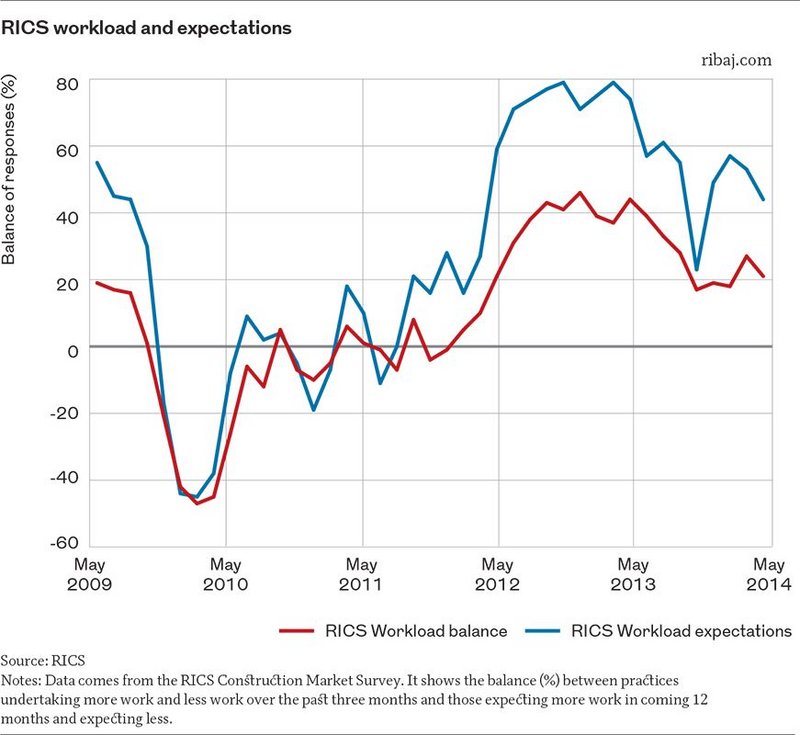 Rather surprisingly, though, given that repair and maintenance work has been static for years, the general picture appears to be positive as we see in Chart 6. On the face of it, this is encouraging news for smaller architects who work locally and on smaller projects.

But again we should be cautious about accepting the results of this survey uncritically. Struggling firms will be represented less than firms doing well. A firm that has gone bust or been wound down will not fill in surveys. Also the pattern will vary across the country and this may not be reflected in the overall picture.

That caveat accepted, it does represent a more positive view of construction than most other indicators, though at local level, outside London, this appears to be mainly concentrated in areas south of the line between the Wash and the Bristol Channel. 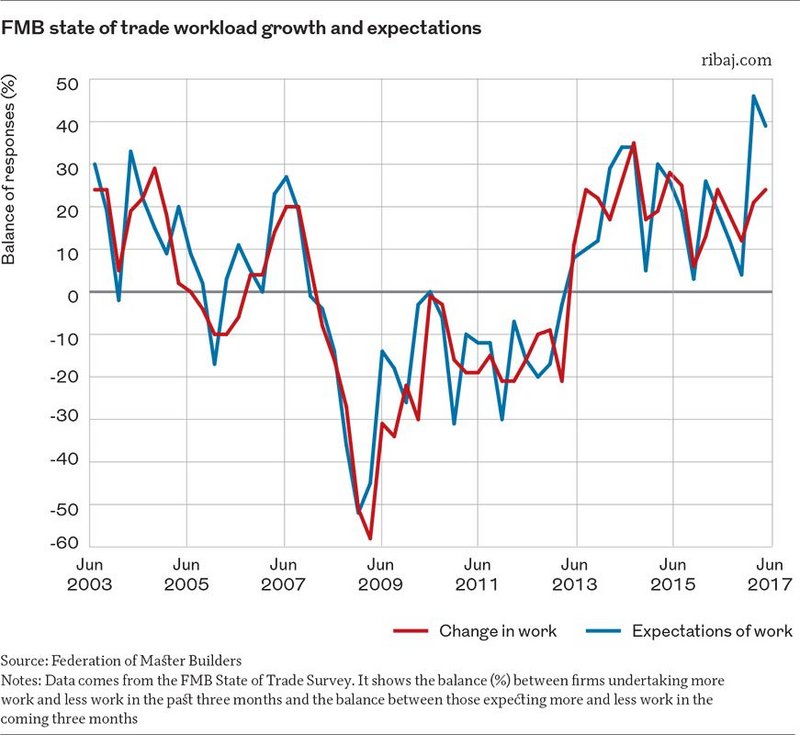 Then we turn to the RIBA Future Trends survey (Chart 7) and how architects see their futures. All the caveats about other surveys hold here. As human beings we are skewed to be optimistic about our own futures. In June the optimism among architects took a knock. The majority of 23% which in May had hopes of better workloads ahead fell sharply to just 10%. The positive balance of firms looking to expand staffing levels also fell slightly.

Not surprisingly, as the report points out, firms in London remain the most nervous with expectations once again turning negative.

For those who like circuses – high degrees of uncertainty, unexpected changes and lots of moving parts – this might be an exciting experience. But in the business world that tends not to be conducive to the dull job of making steady, sustainable progress.

So we should not be surprised to see construction activity stuttering, and nor should we be unduly surprised if it declines while we wait for the circus to move on and for certainty to return. 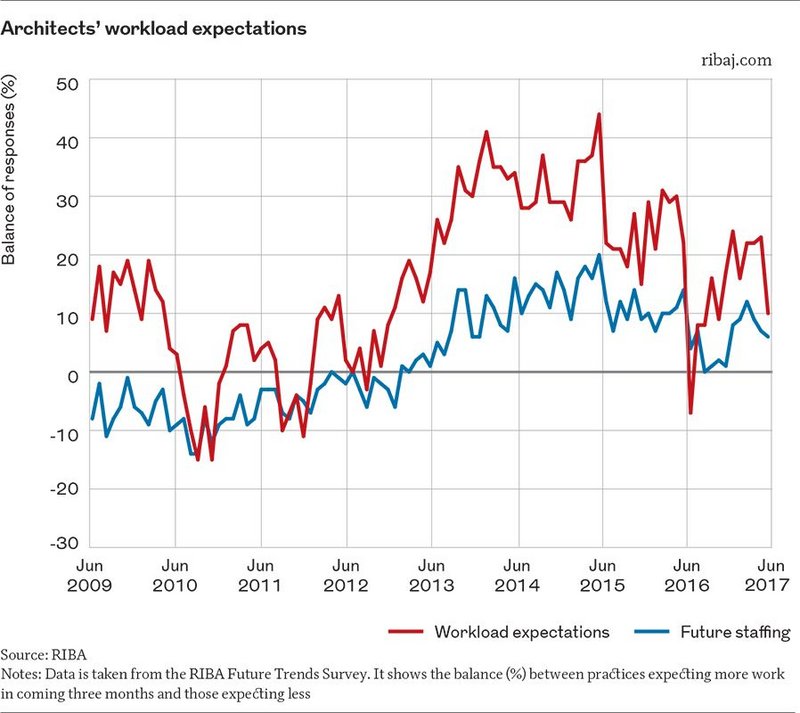