With uncertainty at home and expanding markets abroad, now’s the time for UK practices to up their global game 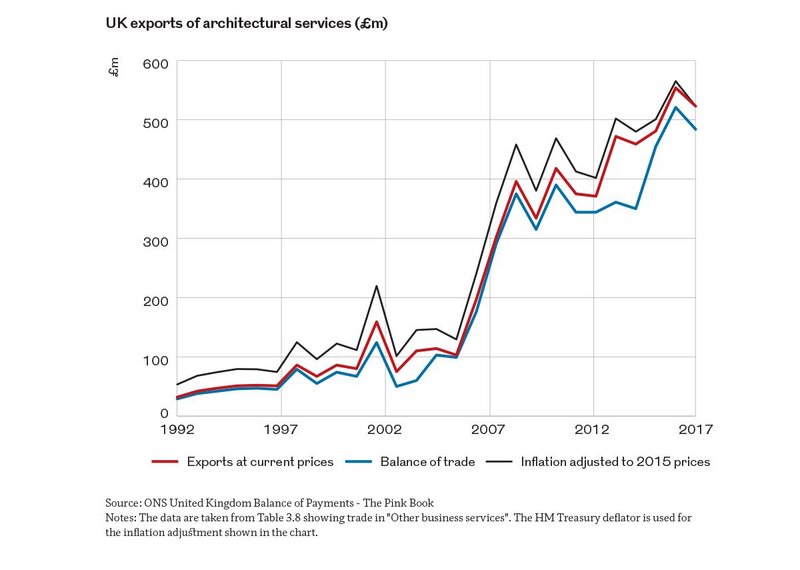 There will be few better times than the present for the UK’s top architectural practices to be upping their efforts to boost their workloads abroad. If expanding international work wasn’t on the agenda for the last strategy meeting, maybe it should be for the next.

There are both positive and negative reasons for this. The big positives for UK architecture practices is that in recent years they have been increasingly active in overseas markets and built a strong reputation across the world.

Chart 1 shows how exports of architectural services have grown. The trend is very positive, although we must bear in mind that measurement, particularly of services, can be tricky and quirks in data and definitions may distort the picture.

RIBA’s business benchmarking survey shows that 19% of revenue generated by chartered practices in 2017 came from work on projects overseas. Among larger practices it was 29%. Inevitably, London was found to account for 91% of international revenue.

International trade in architecture has been greatly boosted by the flexibility and connectivity provided by the internet and a general increase in global trade in business services prompted by multilateral trade arrangements negotiated through the World Trade Organisation. 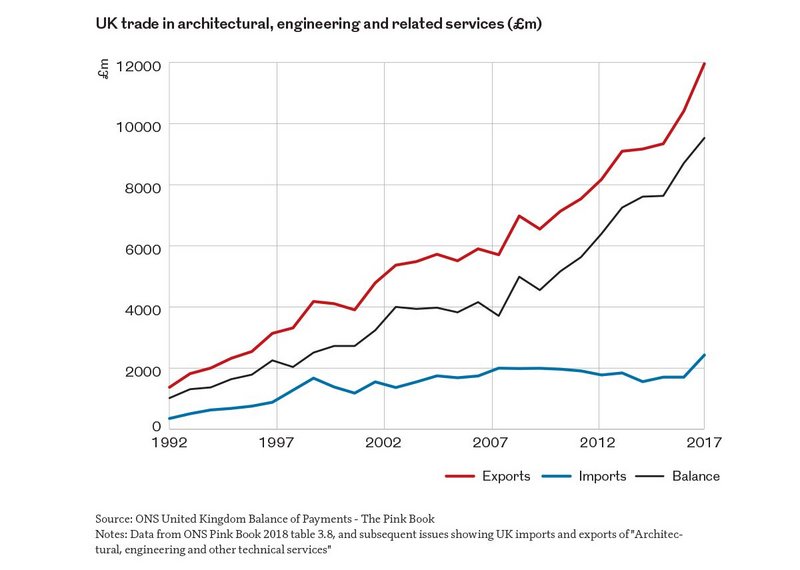 While caveats over data should be noted, the UK’s global position is impressive. In 2017 its exports in architectural, engineering, scientific and other technical services were ahead of Germany, France and the USA, according to the UN-supported International Trade Centre.

This provides a huge platform for further growth.

So, why is it such a good time for UK practices to boost overseas activity?

The uncertainty that stalks the home market is the most immediate prompt. Whatever the long-term benefits or costs of Brexit, in the short term it is proving to be far from a smooth transition. And we have not left yet.

A quick look at the data on prices for architectural services (Chart 3) or the workload expectations among architects (Chart 4) suggests the EU referendum was no friend to the sector in the short term.

Taking consumer price rises into account, the market value of architectural services shifted from rising to falling in quick timing after the vote. And, while the trend in workload expectations was always likely to dip after peaking in 2015 and 2016, the downward path we see in Chart 4 is far from encouraging, particularly when you take account of the likely favourable bias in surveys of this nature.

Add to this an easing in global economic activity with concerns over a downturn in the business cycle and the underlying economic prospects in the UK look iffy at best.

Most forecasters of UK construction are far from bullish. The best offer seems to be sluggish growth for the next five years or so. At least that’s the view taken by the Construction Industry Training Board. The Construction Products Association sees a dip in output this year and two years of growth below 2%. Experian suggests low growth this year then above 2% in 2020 and 2021. But all come with heavy caveats and the hope that housing and infrastructure investment will carry the industry through.

This means building on the successes of recent years and providing a buffer to volatility in the UK market must be attractive.

Taking the longer view, the UK along with most developed nations will be investing less in the built environment than the many rapidly developing nations. Some quick stats from the International Monetary Fund on overall investment (of which the built environment takes a large slice) show that in major advanced economies it is about a fifth of GDP, where in emerging economies it is about a third. Perhaps more importantly, the emerging economies are expanding far more rapidly. IMF reckons GDP growth in emerging economies over the next five years will be just shy of 5%, compared with about 1.5% in the major advanced nations.

Growth in built environment activity will be increasingly abroad as the middle class expands in the emerging nations and they become more urbanised. And, assuming China’s Belt and Road Initiative gets anywhere close to expectations, there will be a wall of money pushing overseas construction projects. This will fuel economic growth and demand for an even better built environment.

What developing nations lack is expertise in enough quantity and depth to match their hunger for this. They will look favourably on established operations with good reputations. With a strong foothold already, expanding into these growing markets now will help cement the UK’s position for years to come when competition will inevitably become stiffer.

There is a subtler point underpinning the case for deepening overseas ties now rather than later. Whichever side of the Brexit debate people might be on, only a fool would suggest that the unedifying political spectacle surrounding the negotiations to date has not damaged the UK’s reputation.

That so many of the architects practising in the UK are from overseas has been a strength. Architecture may be based on science and engineering, but its product is fixed in culture. The ability to understand and appreciate the values embedded in cultural norms abroad is a huge benefit.

If the knock to the UK’s reputation generated by Brexit is not to affect confidence in British firms and, in particular, its architectural professionals, business contacts need to be maintained and reinforced. The sooner the better.