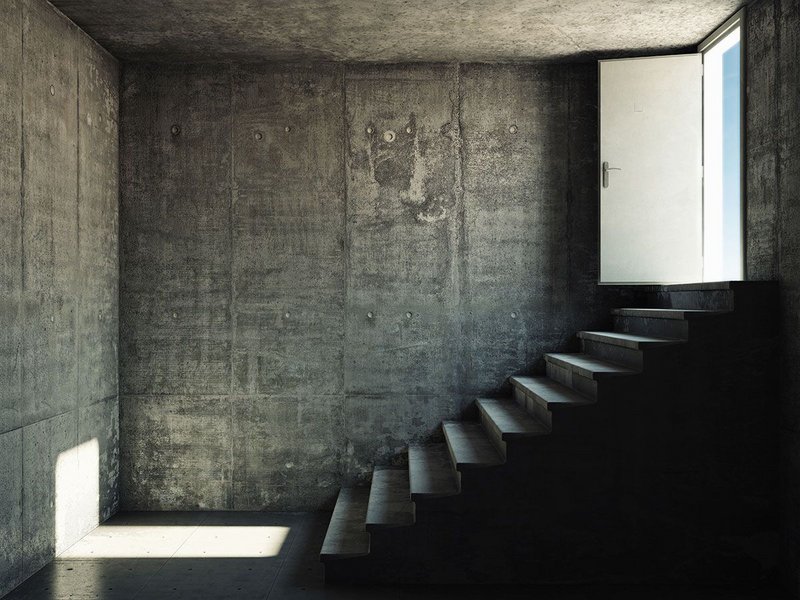 Basements are one way people can extend their homes – usually in well-heeled areas. Credit: istock

UK households paid £33 billion to contractors and professionals for home improvement work in the year to March 2018, according to the Family Spending survey – up from a shade under £30bn the year earlier.

It’s big bucks, providing a large slice of the bread and butter work for architects, particularly in smaller local practices.

The RIBA Business Benchmarking 2018 survey shows work on one-off houses, extensions conversions or alterations accounted for 73% of the revenue for lone architects and more than half of work among practices of three to five. The proportions shift over time, but most of this work tends to be improvements rather than new build.

So any sign that the growing home improvement market might be set to falter would represent a knock to architects up and down the country.

Well, there are signs. The latest Barbour ABI Home Improvers of Great Britain 2019 report shows that applications for home improvement across Great Britain have begun to slide, suggesting households may be reining in their passions to create their dream homes.

Chart 1 shows the pattern of applications over the years and, while the fall in applications does not necessarily translate into a fall in work, it is a warning sign worth noting.

Fortunately, in 2018 at least, despite the fall in the quantity of planning applications for home improvement, the quality appears to have improved from architects’ perspective. The number of applications for projects to expand the size of homes held up well. Roughly half the home improvement applications included either loft conversions, extensions or basements, or a combination of them, and as Chart 2 shows these increased in the year.

But these are national figures, and the Barbour ABI report shows clear regional differences in both the pattern and the trends of home improvement work. Even within localised markets there is significant variation in opportunities for those who deliver the work, with the patterns shifting markedly over time, as the fortunes and aspirations of households change.

For many years the central London boroughs of Kensington & Chelsea and Westminster dominated the report’s ranking tables, which are based on the number of planning applications for home improvements per 100 private homes in the borough.

This measure may not reflect the total cash spent, but it highlights areas of activity and trends.

The figures show applications dropping in the year, particularly in areas of London and the South. Sevenoaks in Kent was cast as the top local authority in Britain for home improvement on the Barbour measure, breaking the dominance held by Westminster and Kensington & Chelsea over many years.

In Sevenoaks in 2018 there was a shade over 5.5 planning applications for every 100 private homes, with Westminster, in second place, a shade under 5.5. Kensington & Chelsea, which topped the national table in 2016, came in 10th.

However, Sevenoaks came out top not because planning applications rose, but because its numbers slipped less than those of other high-flying local authorities.

While the Barbour ABI figures don’t measure how much is spent, they are a guide to where the hot spots are in terms of numbers of potential projects. The report also shows how the pattern of activity is changing and explores the factors driving change in how households of varying types spend on home improvement.

It digs into data on the main types of work, such as extensions, loft works and basements. When we look at these types of home improvement other local authorities come to the fore. This is because different circumstances and different factors drive each type of work.

One overarching factor provides a clear indicator of where to find the most work in home improvement. That is house prices and by extension land values.

This makes obvious sense. The cost of an extension, loft work or putting in a basement may vary across the country, but not as much as the value they generate. Where land values are high, adding an extra room is worth hugely more than where land values are low. That’s why there’s little investment in home improvement projects in Blackpool, say, compared with the investment in the home counties. The high land values in the south of England mean it dominates the home improvement market.

Also, where land is very tight, such as in inner urban areas, you are more likely to find loft extensions or basements rather than extensions. But where people have large gardens you can expect them to go for extensions.

So, for instance, central London still dominates for basement work, with activity in Kensington and Chelsea way out in front. That is hardly a surprise given the cost of a basement. It generally only makes financial sense to embark on such a project if the land value is high. Outside London and other high value urban areas, basements tend to be a rarity. Almost 90% of all applications fall within boroughs where the average house price in 2018 was above £250,000.

Table 1 shows how the top spots for basements are all in London. 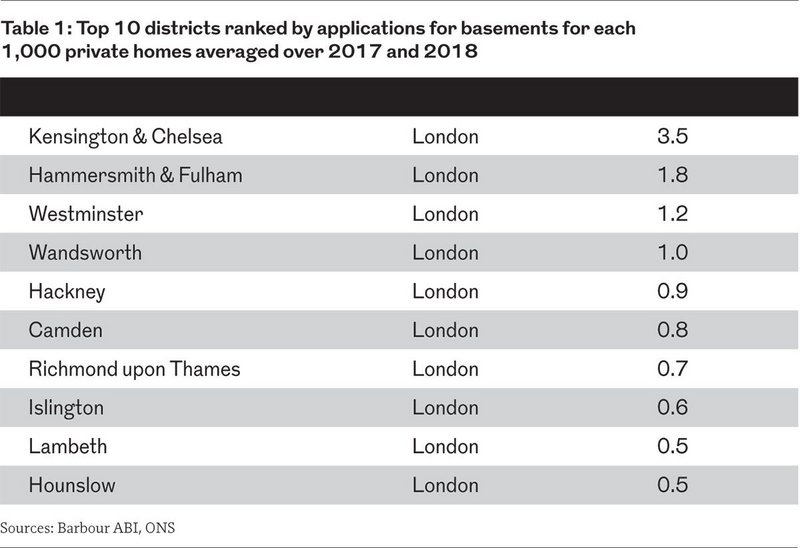 However the basement boom looks to be well and truly over, with the number of applications fading fast as property prices in London have stagnated and fallen (see Chart 3).

When it comes to extensions, South Bucks tops the table just ahead of St Albans, with planning applications submitted annually for about 3% of the private housing stock over the past two years. (Table 2) Looking down the list of top locations for extensions, they are all in what might be described as London’s commuter belt. 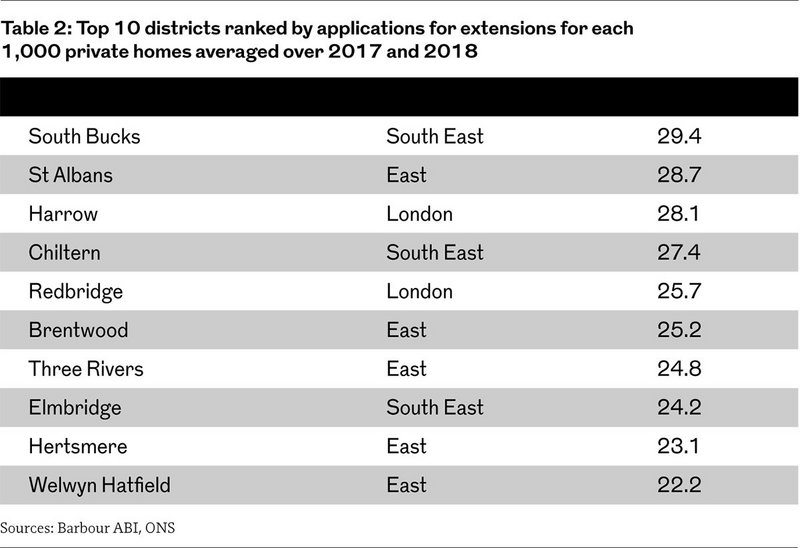 Apart from a desire for more space and the wherewithal to pay, two big factors come into play that will influence the likelihood of an application being submitted for an extension: available land and the value of the house. Value seems to be the trump card, as London tops the regions for the propensity of homeowners to extend their homes.

It is no surprise then that London features even more strongly when it comes to loft conversions. Five London districts feature in the top 10 (Table 3). Loft conversions don’t take extra land, which is in short supply in most parts of London. But to make them worthwhile financially it helps if the house prices in the area are high. 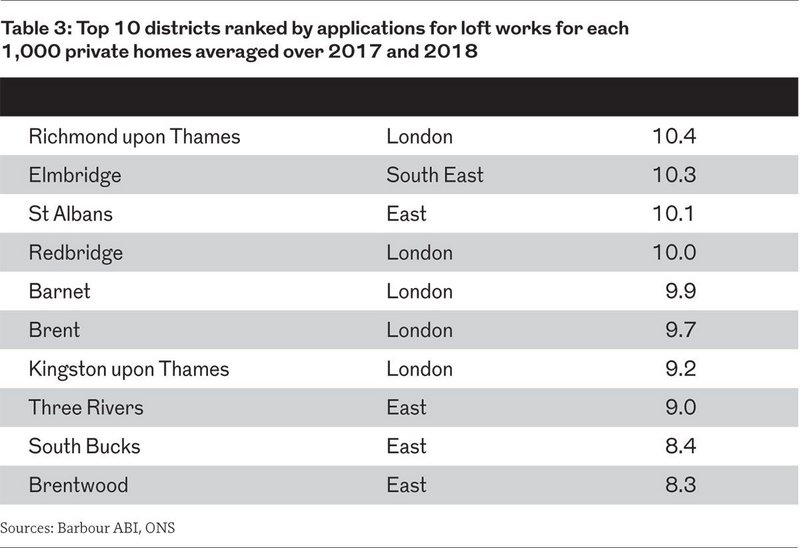 About half of Britain’s housing stock falls within boroughs with an average house price in 2018 of £215,000. But these boroughs accounted for almost 80% of all applications for loft works in the year.

Looking forward, the healthy state of home improvement seen over recent years does seem to be fading.

It’s well established that economic growth and home improvement go hand in hand. And a couple of indicators that provide guides to the future of the sector both point to a downturn.

Another quick indicator of how the economy might influence home improvement projects can be seen in spending on other big ticket outlay for households, such as cars. Chart 5 shows a strong relationship between car sales and home improvement. The data suggests the trend in work on home improvement tends to follow car sales by about nine months, providing one potential early warning indicator. As we see, UK car sales peaked in 2016 and have fallen since.

That of course is looking at national level changes. There will be regional differences. We already see London activity fading, but with some buoyancy in the regions.

Overall though, the suggestion, certainly from the Barbour ABI analysis, is that we should be prepared for a slowdown.

It is hard to ascertain how much of the slowdown is a Brexit uncertainty effect. If a deal is struck and some normality returns to economic and political debate, there may be a release of optimism and a bounce back. That seems hopeful.

However, in the far longer term the need and the opportunities to improve the existing housing stock of Britain remain huge. It will remain a major market for architects.