Housing is bread and butter for many architects, but the sector is showing cause for concern. Brian Green checks the upcoming menu 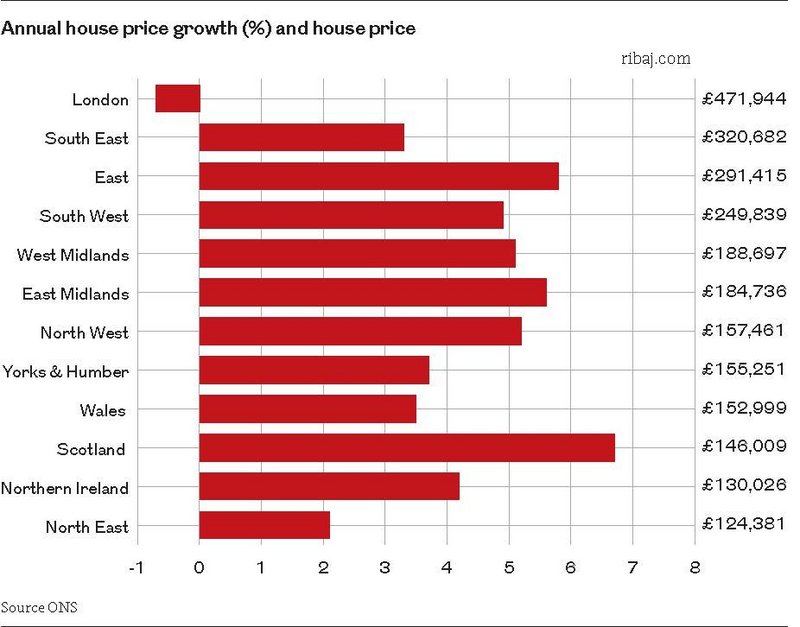 Prospects for many of the nation’s architects are tied intimately to the fate of the housing market. New-build housing and home improvements account for the lion’s share of work done by UK practices.

In recent years housing has been the key growth sector within construction. That has been good for architects, but it has increased their reliance on its continued good fortune.

However, there is a growing sense of unease.

Various factors, including Brexit, have created concerns in parts of Britain, particularly in London, that the sector may be heading into a rough period. Certainly, London’s current woes are influencing the wider view of the housing market, not least because Britain takes so many of its political and economic cues from the capital. 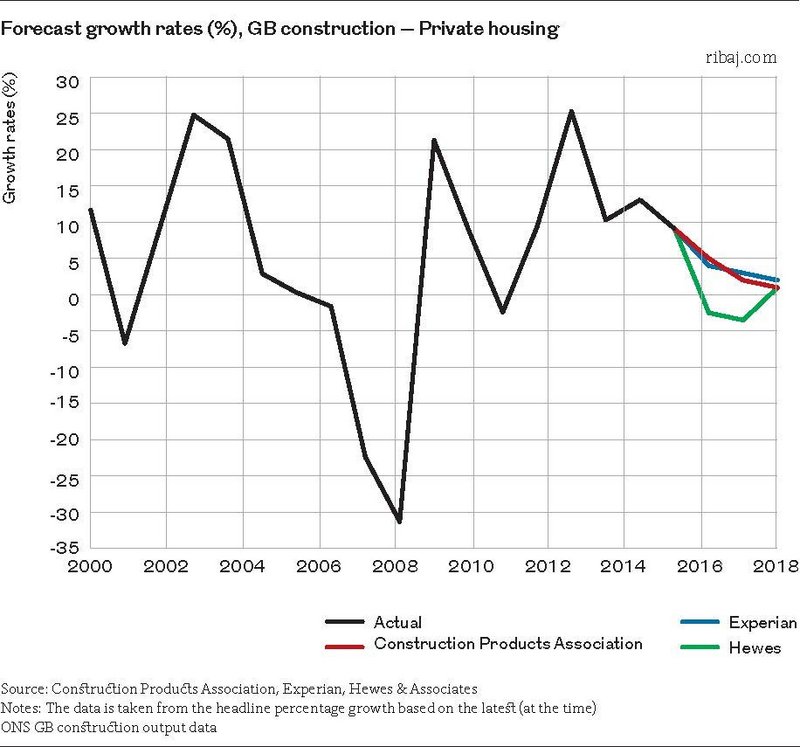 Recent falls in house prices in London have reinforced these concerns and stimulated debate over whether this might herald a wider slump in house prices. Chart 1 shows the rise over the year to March, according to the ONS. It also shows house prices. The capital is out on its own on both counts.

If we look closer, however, annual falls in London house prices tend to be confined to the more expensive and central locations. For April, housing information provider Hometrack showed year-on-year falls across just five boroughs. However, it found monthly falls more widespread across the boroughs. The general picture is that London housing as a generator of wealth is over, for the time being at least, and in real terms is in reverse. 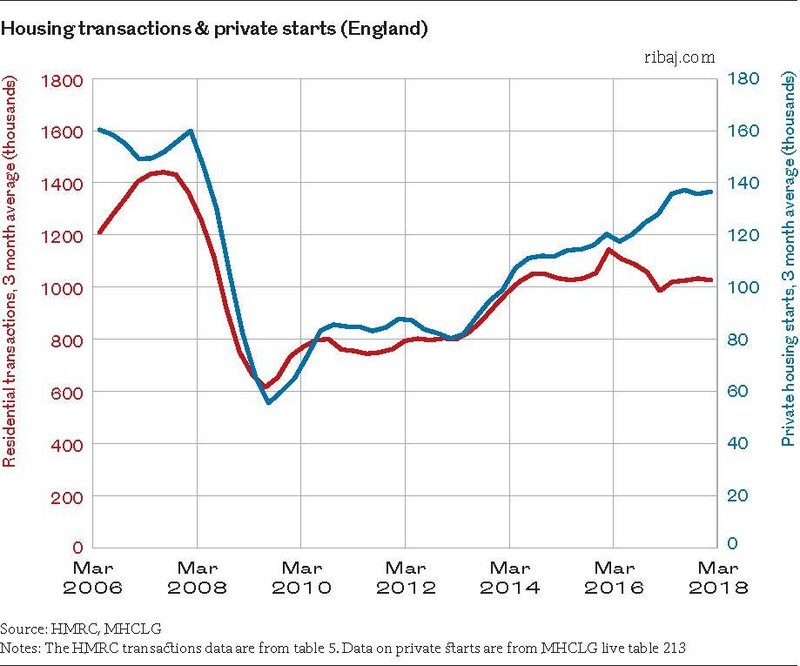 Many factors have contributed to halting the incessant rise in London house prices, including Brexit, a clampdown on rich Russians and foreign investment, and fears that have circulated for some time that there was overbuilding in the high-end markets.

There is always a risk of overplaying the impact of the London market on national house building activity and, indeed, the effect of house price movements more widely. But history shows that house-building activity is influenced by swift changes in house prices. Meanwhile, the flow to the rest of Britain of housing wealth generated from London does support construction activity elsewhere.

The big question for those with skin in the game is how might all this general unease, mainly focused on London, affect housing-related construction across the nation in the short to medium term? And, more importantly, where do the risks and opportunities lie?

That is a massive question, and not one answered with any great confidence, given the plumes of uncertainty that hover over the nation. But there are some pointers that might help.

The first things we might look to are the latest construction forecasts. Here it’s worth focusing first on private housing, as this accounts for 80% to 85% of the new homes built and its fortunes affect funding to the social sector. 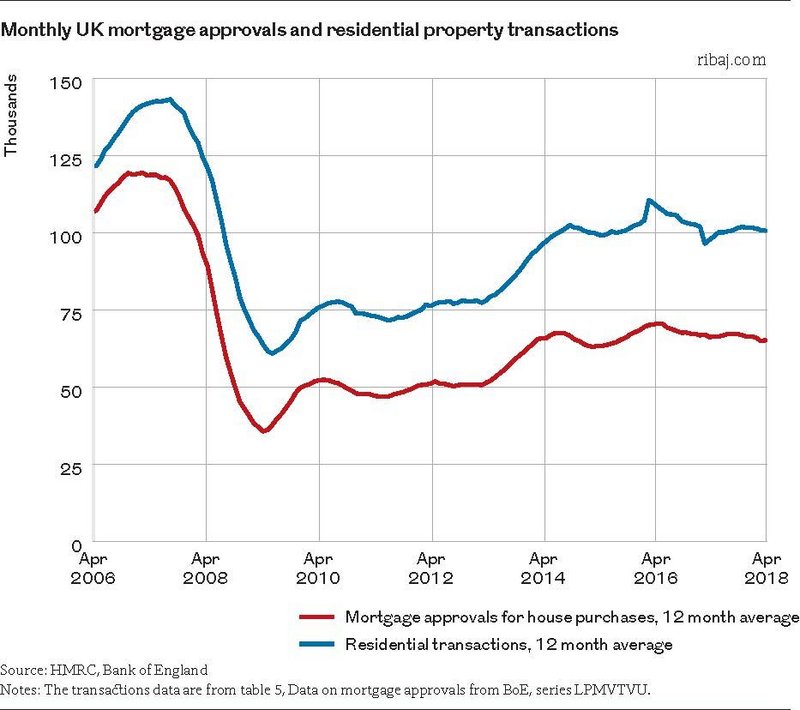 Chart 2 shows forecasts produced last spring. The consensus suggests a marked fall in the growth rate in private sector house building to near stagnation in 2020.

There is a very rough rule of thumb that says about 10% of homes sold are new-build. There will be fluctuation in the proportions over time, with more new homes sold in recessions as existing owners hold fast and builders become forced sellers. But across the 30 years between 1978 and 2008 the ratio has held for England and Wales at between one in eight and one in 12.

Chart 3 shows the relationship between housing transactions, as measured by HMRC, and housing starts in England. As we see, the ratio held firm with starts tracking transactions up to 2016, after which starts continued to rise while transactions reached a plateau. This separation in the growth of starts and transactions was expected on the introduction of Help to Buy for new-build homes.

The scheme provides an incentive to buy new-build rather than second-hand homes, which should both increase the relative price of new build and increase its market share. There is evidence that both have occurred. Land Registry house price statistics show faster inflation for new build and Chart 3 suggests a rise in the proportion of new homes being built relative to existing homes. Housing starts are more than 20% up on where we might have expected them to be, based on the previous pattern.

This begs the question of whether starts will continue to rise faster than overall sales or whether they will start to track – but at a higher level, having reached a new equilibrium. We shall see, but the likelihood leans towards the latter. 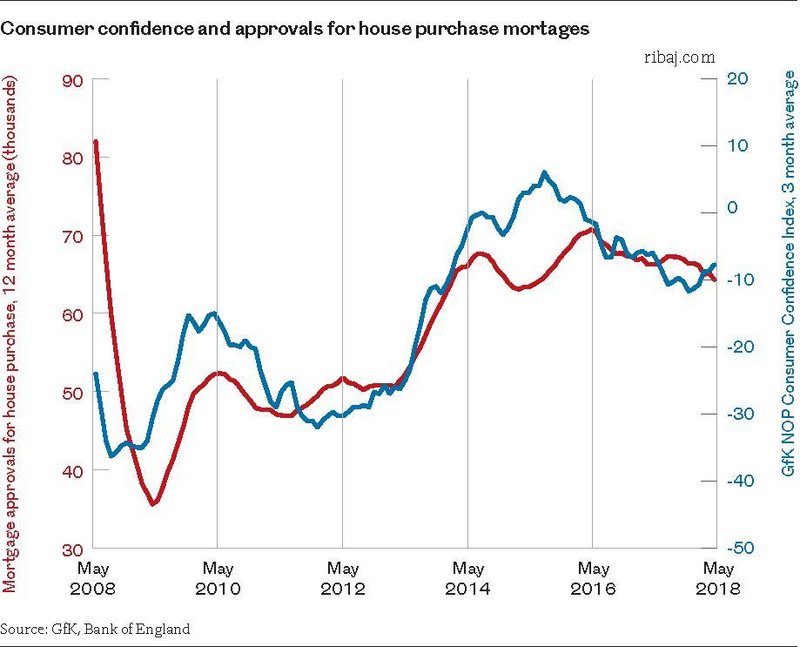 Either way the rate of growth in new build has been boosted by Help to Buy, though at some point this surge effect will fade as, we might reasonably assume, a new equilibrium is reached.

The upshot of this reasoning, if it holds water, is that the strong growth in new build in recent years was flattered by the introduction of Help to Buy, but in future it will track more closely the path of housing transactions. So where are they heading?

In Chart 4 we see the relationship between mortgage approvals for home purchase and residential property transactions (home purchases). Of course, there is a close link. Interestingly, most of the fall in home-purchase mortgages is down to a substantial drop in mortgaged home moves, rather than mortgages taken out by first-time buyers, which were about the same in 2017 as they were in 2007. 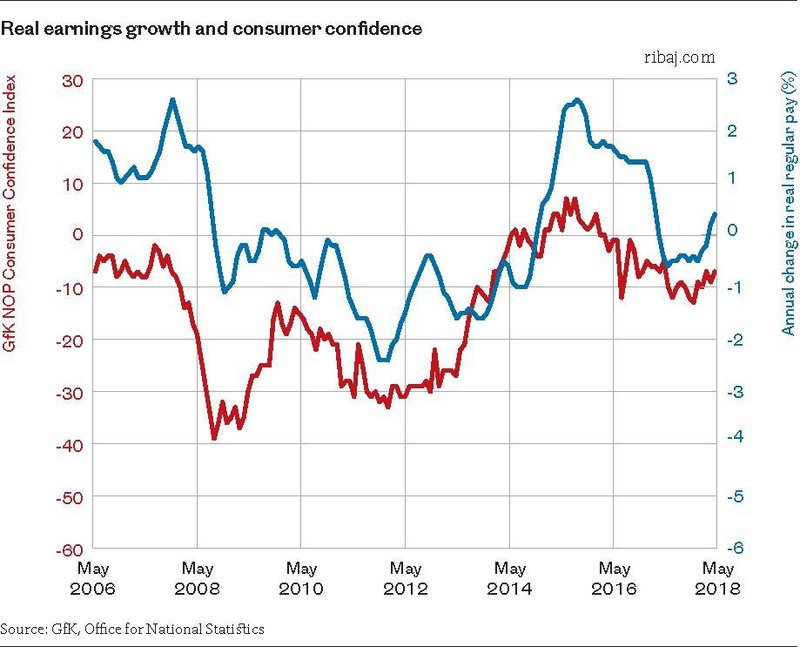 Finally, if we look at real earnings growth against the consumer confidence index, as in Chart 6, we again see a close link, which is what we might expect.

History suggests that house-price growth also influences growth in private house building. It both boosts confidence within the economy and oils the wheels driving home sales.

Looking to the prospect of real earnings, the consensus of forecasts presented by HM Treasury points to growth remaining positive, but below 1%, over the next couple of years. But here the caveat must be that if inflation rises strongly or is unexpectedly high, earnings are likely to be squeezed.

The consensus also seems to be that house prices will rise gently, about 3% a year against about 2% rise in inflation.

The point with average house prices, though, is that averages hide important detail. We might reasonably expect to see continued modest to solid house-price growth outside London with stagnation and falls inside London, certainly in the near term.

Based on what we know, little points to a boost in the housing market that will generate higher turnover of homes and significantly more house building at a national level. But neither have we sufficient evidence to suggest a slump.

There will be significant uncertainty over the economy as we cross the Brexit bridge. Meanwhile, the economic factors that support house building are already finely balanced, with the level of home sales (residential transactions) stagnant and the boost from the Help-to-Buy surge fading if not faded. This is not an environment that is likely to fuel much enthusiasm among house builders and it does seem as if the downsides might outweigh the upsides.

Looked at this way, which seems consistent with the central forecasts from Experian, the Construction Products Association and Hewes & Associates, the sector offers at best the possibility of some stability, and at worst cause for concern over the number of new homes likely to be built.

In terms of what work is in the pipeline, the ONS new orders for construction figures suggest orders in 2017 for all housing work were up by about 6% in cash terms. Discount that for inflation and it probably isn’t much of a rise.

However, there are and will be regional variation and it is interesting to see this in the pipeline of new orders for housing work. Orders in London have fallen the most, though they had a long way to fall having risen rapidly. It is the North that is seeing the best of the growth. This points to a flip in the two-speed north-south growth we have seen in recent years, though the South East continues to see growth in orders for new housing work.

Llittle points to a boost in the housing market that will generate higher turnover of homes and significantly more house building at a national level. But neither have we sufficient evidence to suggest a slump

The overall outlook for private new build numbers does seem a bit patchy and far from perky. But for architects, the housing market is more than just the numbers of new homes built. Taking a wider view there are some potentially positive trends, along with a few worries.

One issue worth noting is a possible slowdown in the flow of money into home improvement hotspots. Much of this money follows the mainly late middle-aged out of London as they convert the much-inflated housing equity gained from their London homes into dream homes elsewhere, funding many a major refurbishment project and providing healthy fees to smaller practices across the country.

A sluggish London market may have an impact, but on what we know now that is a potential issue to be added to the “keep an eye on” pile. It could strangle the flow – or, indeed, a slowdown in house prices in the capital may prompt a short-term boost as some homeowners in the capital choose an earlier exodus fearing a relative fall in the value of London housing.

There is many an upside for architects of this outward migration of London’s equity-rich, mainly baby boomer, home buyers. As a group they tend to be very keen on investing in dream homes. Indeed, baby boomers generally provide the baseload for the self and custom-build market.

Here there is potential for rising opportunities, with the introduction of the Right-to-Build legislation, as part of the Housing and Planning Act 2016. It encourages local authorities to provide more self-build plots. This should reduce the barriers to self or custom-build, as getting land is regarded as a major problem. This could be a boon for architects.

There may also be opportunities that stem from the expected tightening of the construction labour market after Brexit. House builders, worried about how to build in a way that reduces labour, will rest heavily on design.

The clues emerging from the data hint that it may be a good time for architects heavily involved in housing to look at their options more widely. Perhaps it is time to shift focus away from the vanilla and taste some of the other flavours that are emerging.