Brexit, Covid and the war in Ukraine made life uncertain enough. Now weeks of political and economic turbulence have crowned that. Is a housing crash inevitable or just worryingly possible, asks Brian Green 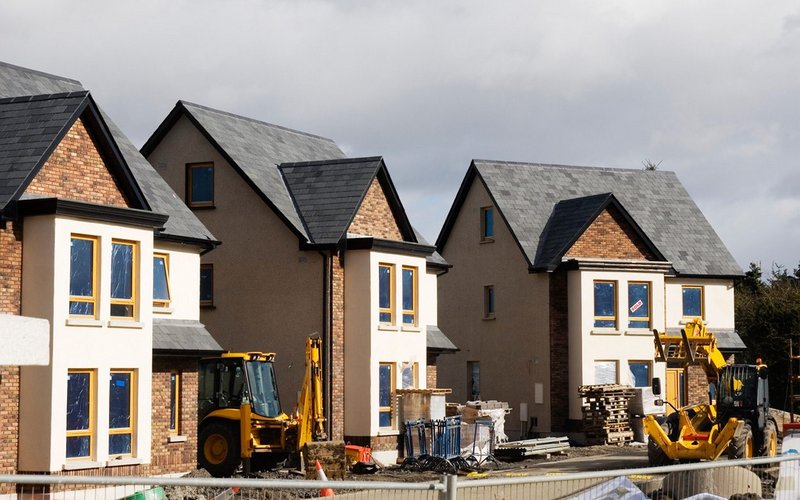 Where will the housing market go? Credit: Media Production, iStock

Those distant from the detailed mechanics of the housing market must be bamboozled by the range in current predictions for the sector – from a mild recession to a crash in both house prices and new homes built.

They can rest assured that even those closer to the market are bamboozled, but perhaps not in the same way. Now is not a good time to make a single point prediction for where the economy is going. It is an even worse time to plump for how much house prices might fall or how many homes we might build over the next two to three years.

Why? Because fragility, uncertainty, and fear are at play. Fragility in the housing market is clear, not least because prices are historically exceptionally (for some worryingly) high after a post-pandemic surge, as Chart 1 illustrates. In February 2020, before the lockdown, average house prices had been falling slightly since September 2019. The market appeared to be cooling. But prompted by the pandemic, prices rose by more than a quarter in the 30 months to July this year, more than twice as fast as earnings.

There is uncertainty over how much pain will be inflicted on the market. A fall of 20% in nominal average prices would take the level back to the September 2019 peak. In those terms, such a fall may seem reasonable to many. But it would intensify growing fear, whether articulated or not, that the market might reach a point at which feedback loops tip it into a very nasty downward spiral.

Downward spirals in house prices are not unusual as falling prices lead to reduced demand which prompts further falls in prices. This inevitably spills into the new-build market, where lower house prices squeeze builders’ margins and projects become increasingly unviable and are shelved.

The latest RICS residential market report suggests expectation among estate agents is for a fall of around 1% in the coming year, but price rises to be about 3% per annum over the next five years. David Smith, economics editor of The Sunday Times, suggested at this year’s Housing Market Intelligence conference in London that there might be a sharp slowdown rather than a crash. Meanwhile, in his latest housing report, Andrew Wishart, senior property economist at Capital Economics, penned in a fall in house prices in real terms of 8.5% next year with further falls to come. He also suggests a 25% fall in housing completions between 2022 and 2023, with a fall of almost 40% in housing starts. 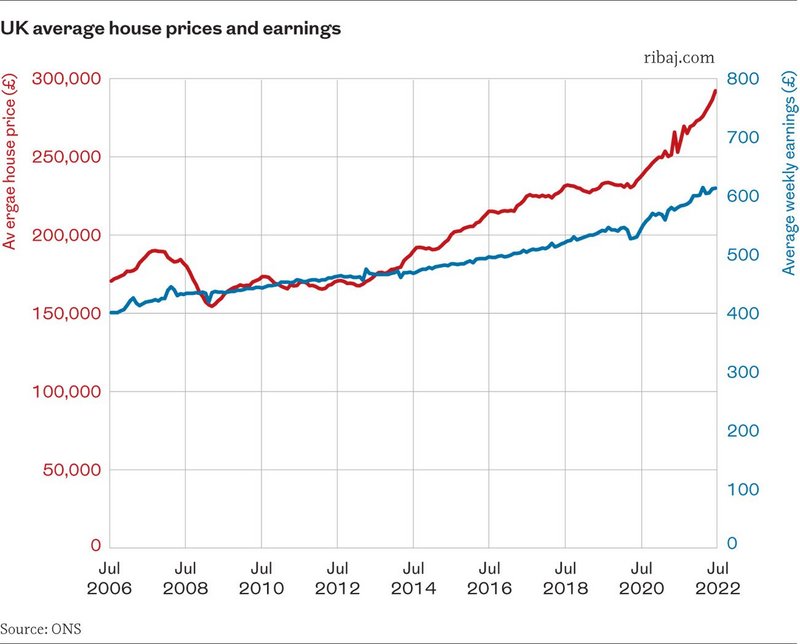 The notion of a tipping point is one explanation for such a wide range of sentiment. It may be better, therefore, to see the situation of the UK housing market as weak with major downside risks, not least resulting from the exceptionally unpredictable decision-making of the current government.

Getting to grips with what is happening requires a good exploration and a reasonable understanding of the demand and supply issues, along with appreciation of the mechanisms at play, both in the housing market and within the house building industry.

There are multiple mechanisms influencing housing market activity. Indeed, they can differ by location of market sector. But is worth considering one mechanism critical to understanding house price movements. That is the impact of loss aversion and how it creates what is often referred to as ‘stickiness’ in house prices.

A fall in prices triggers a fall in transactions, as many people pull their homes off the market unwilling to realise a loss. This loss may have little to do with what they paid for the house. It is often anchored to the seller’s notion of what the house is worth, taken perhaps from estate agents’ windows. Impartial observers might consider the price optimistic or unrealistic.

This stickiness acts as a partial automatic stabiliser of house prices, slowing potential rapid falls through lowering supply (numbers of homes for sale) in the market. But while it helps to support prices, a fall in transactions is bad news for house builders. They tend to take a fairly consistent share of buyers, historically around 10% although slightly higher with Help to Buy in place. So their production broadly tracks transactions.

The stickiness is also not sustainable over the long term. The danger is that the proportion of those forced or very eager to sell rises within the overall pool of sellers. This makes the market more fragile, and it moves ever closer to tipping into a crash. Debt, divorce, and death are often linked to the forced seller market, as are house builders, which tend to account for around 10% of sales. Housing repossessions, which may rise in a recession, then add to pool of forced sales.

Keeping this in mind, we need to turn to the demand side of housing. It would not be overstating to suggest this is looking troublesome. Scary some might say.

Mortgage rates are rising rapidly, the cost of living is squeezing the disposable income of households, real earnings growth is negative, a recession appears baked in, and there is huge political uncertainty that is spooking the financial markets. There is real concern that the chaotic six-week tenure of Liz Truss as PM has permanently scarred the UK's long-won reputation for political stability in the eyes of both the markets and our trading partners. On top of that, wiggle room for the Chancellor is limited given the rapidly inflated level of government debt. 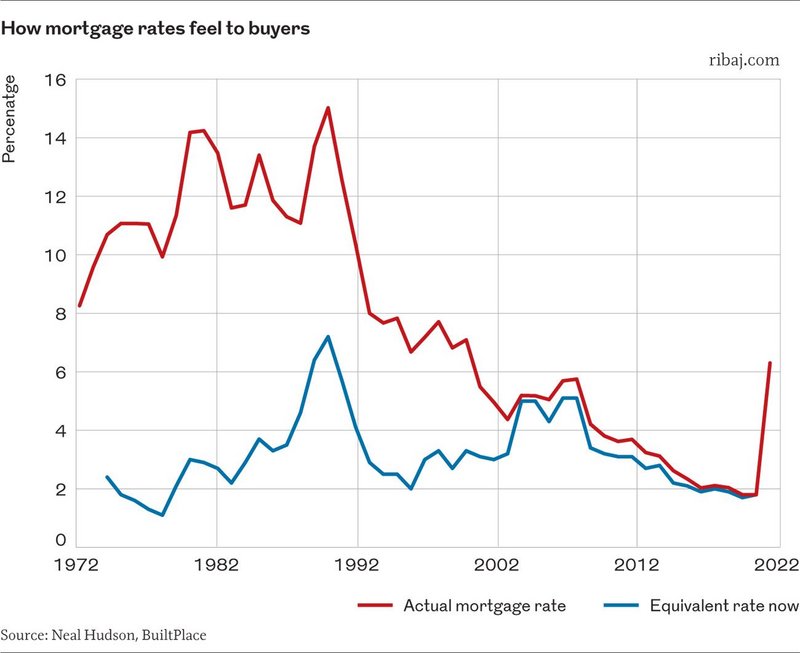 Each of these factors is hugely significant and deserves detailed investigation. But a focus on real income growth and mortgage markets might provide a flavour of the perils in the economy and the danger to demand in the housing sector.

The persistence of low mortgage rates has been a concern among many housing market commentators for a while. First, it has boosted house prices and the house-price-to-incomes ratio, making it tougher for younger potential buyers. Secondly, it has left open the threat, now being realised, of pain should there be a sudden rise.

Housing market analyst Neal Hudson produces an intriguing chart that sums up some of the problems (see Chart 2). This shows the headline rate of mortgages over time and how they felt to buyers when taking affordability into account. So, in the ‘equivalent rate now’ data, account is taken of factors such as house prices to incomes and other effects such as the mortgage interest relief at source, MIRAS, tax relief scheme. This gives an indication of how a rate feels to the homeowner.

This shows the huge relative leap which will come as a major financial shock to those moving onto new mortgage terms or who face rises in their variable rate. Calculations by Hudson suggests that an average mortgagee could be facing a rise in repayments of around £7,000 annually, unless there are ways provided to mitigate the hit. Given the cost-of-living pressures and low earnings growth this will be hard to swallow for many, particularly those more exposed than the average mortgagee.

As for real incomes, the ‘China effect’, which had been a positive factor, is now likely to prove negative. This effect, supported by a strong pound, saw ever more of our goods imported at vastly cheaper prices. It had a profound impact on overall inflation from the mid-1990s through to the financial crisis of 2008. The UK effectively imported disinflation that heavily offset homegrown price rises and gave UK firms more scope to provide above inflation pay rises. This effect is now reversing with the UK hostage to imported inflation as the price of goods rockets. There has been limited if any real income growth since 2008. And as Chart 3 shows, we are again in a period of shrinking real incomes. This will bear down on the housing market.

Given this context, growing concern over a potential housing crash can be justified. These are not small headwinds. They are heavy gusts at the least. This is the market into which house builders must sell. 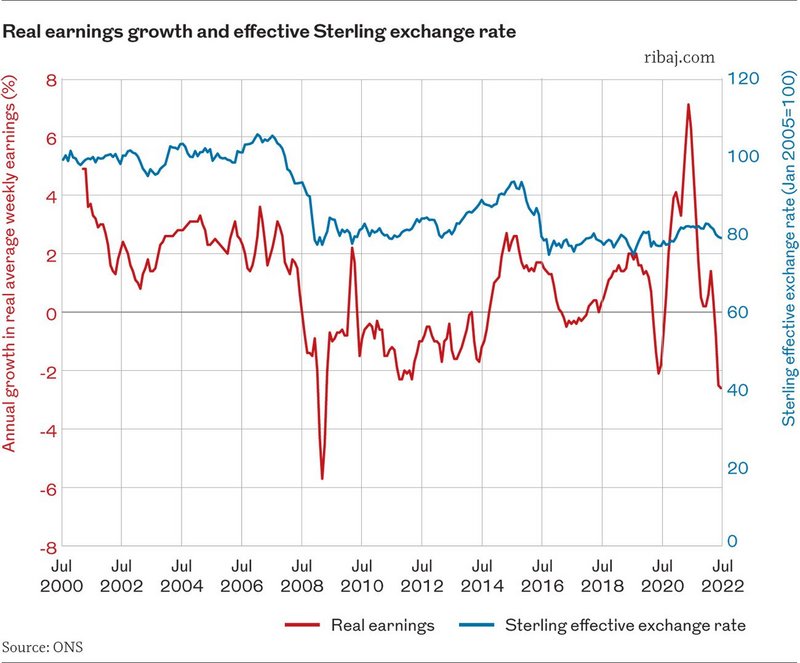 But for house builders the challenges they face are not just on the demand side, but on production and the supply side. These in themselves could be seen to represent even bigger challenges, the like of which most house builders have never faced.

They include a rapid rise in materials and labour costs, with availability also problematic. Meanwhile, house builders are having to come to terms with the end of Help to Buy, which provided huge buoyancy. Development finance is becoming tougher to secure for many SMEs in the market, as lenders become more cautious.

Builders will also have to absorb a massive burden of new costs created by change in regulations, environmental challenges, such as nutrient and water neutrality, and impacts flowing from Grenfell in the form of the Building Safety Levy and the Residential Property Developer Tax. The Home Builders Federation estimates that the cumulative impact of these extra costs will add around £22,000 to each plot.

Data produced for Housing Market Intelligence suggests that most house builders have managed to put themselves on a firm footing over the past two years, rebuilding healthy margins. This does mean they are in better shape to weather the storm.

But the housing market is more complex than in the past. It is increasingly more fragmented, both spatially and in terms of types of housing and types of house buyer. The impacts will be felt differently in different markets, with some coming under intense strain.

How those delivering housing will navigate the next few years is hard to predict. But with much resting on the housing sector, architects need to keep a firm eye on the sector and its subsectors as the pain will not be spread evenly, particularly given the nature of the multiple challenges being faced.