Confidence has surged back into architectural practices across Britain with those in the north of England particularly optimistic.

The March 2021 RIBA Future Trends Workload Index rose from February’s +17 to +29, its highest level since June 2016. Chart 1 shows this growth smoothed over three months. Encouragingly, it also shows how practices are looking to recruit. 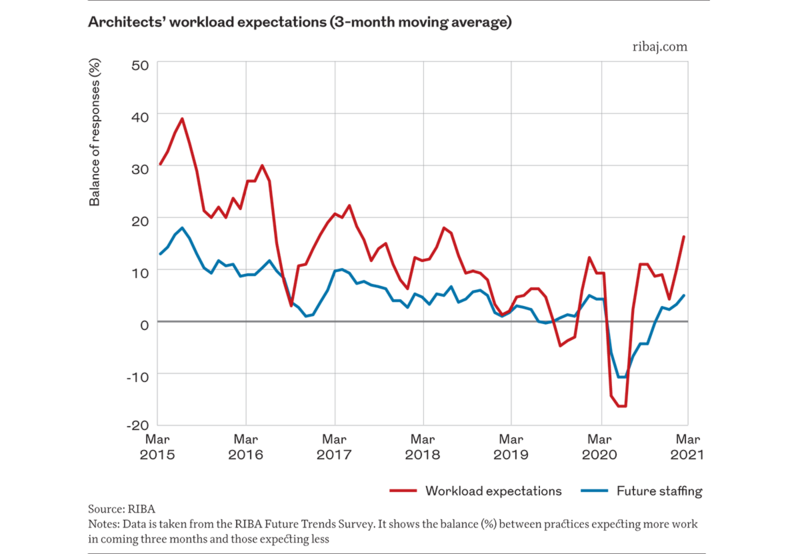 The survey found that 40% of practices expected rising workloads over the coming three months. Much of the rise will be down to bouncing back from a low base. But that does not detract from the clear signs of growing positivity among architectural practices, which is strongly reflected in how they expect to swell staff numbers.

Every region is expecting an uplift in work, with the weakest region, London, showing a healthy positive balance of +18. In the north of England 49% of firms foresee growth.

It is quite clear what has put the spring back in the steps being made by architects. The housing sector is buzzing. Home sales are surging, more households are undertaking home improvements and house prices are rising strongly to underpin a growing willingness to invest in residential construction.

The index for the private housing sector hit +36 in March, its highest level since June 2015. But commercial work at +7, and public sector and community sector both at zero, seem to be providing little in the way of a lift to activity among architects.

This raises the obvious questions of how long the surge in housing work will last. And it is causing many to wonder whether it heralds a structural shift in workloads, with architectural activity in the future even more focused on housing, the home and local communities. 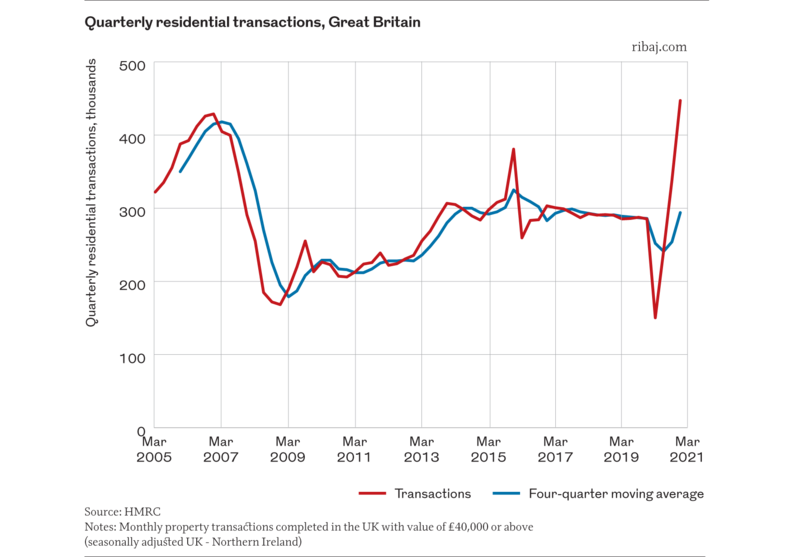 When it comes to the data, perhaps nothing illustrates the surge in housing activity better than recent housing transactions figures, as we see in Chart 2. With the stamp duty holiday adding fuel to already hot underlying demand, house purchases have rocketed. Overall housing transactions underpin the rate of sales of new homes, so this rapid rise is not just about large numbers of households moving; it has encouraged housebuilders to build. 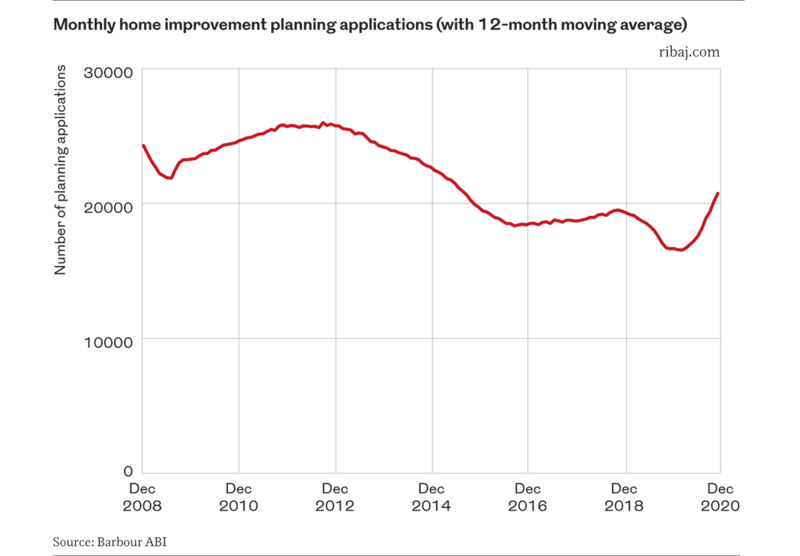 For construction, it is not only the new homes market that is running hot. There has been an equally impressive bounce back in home improvement activity. Chart 3, using data from Barbour ABI, shows how three years of a steadily accelerating downward trend in planning applications for home improvement was reversed by the pandemic. The overall number of applications in 2020 ended 4% up on 2019, despite initially plunging when lockdown was first introduced. 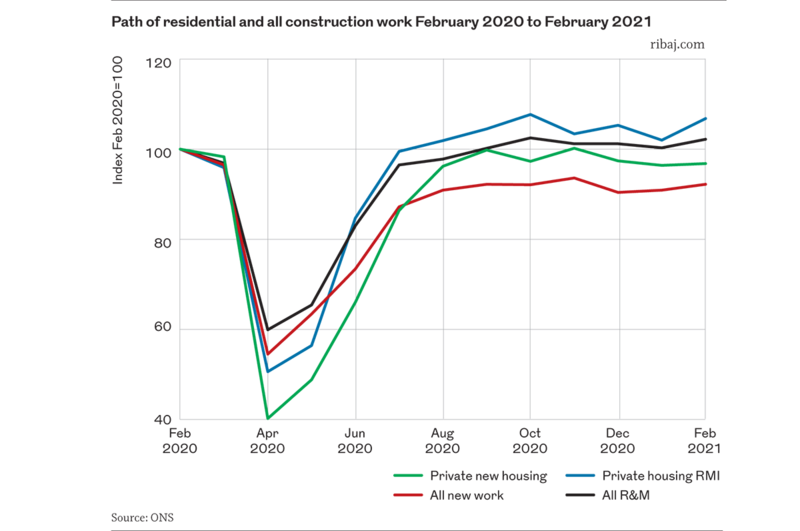 The effect of these upswings on output is clear. Chart 4 shows how private housing repair, maintenance and improvement (RM&I) work is leading the way. In February this year, it was about 7% up on a year earlier, despite construction output overall being about 4% down. Private new housing work had by February yet to reach the level of a year earlier, but it clearly outperformed overall new work activity, notably private commercial work which was 17% down.

There is broad consensus about what has driven the heightened focus on housing. A big factor was how lockdown and working from home will have made many people reassess the value of their domestic circumstances. This seems to have prompted a ‘race for space’, which is much talked about, and a rampant reinvigoration of construction activity in gardens up and down Britain.

The stamp duty holiday added to the rise in home moves and helped pump up house prices. Put simply, it underscored the economic case for households to invest in improving their lot in the housing market. 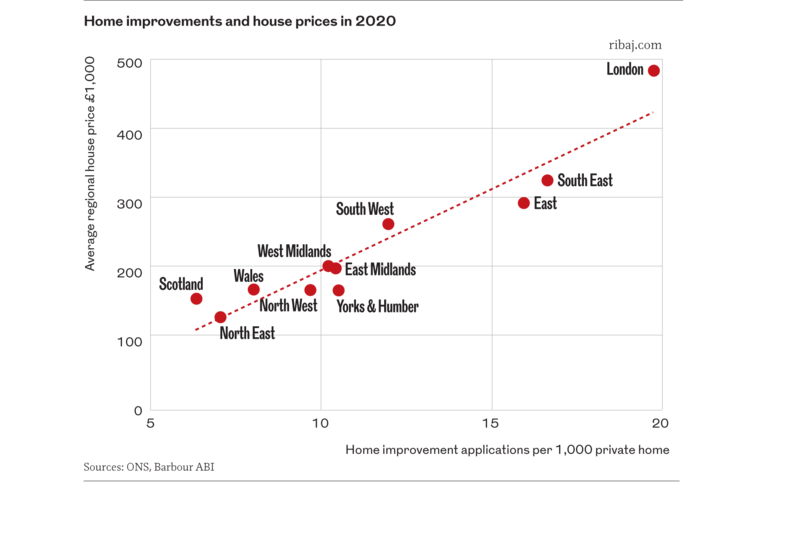 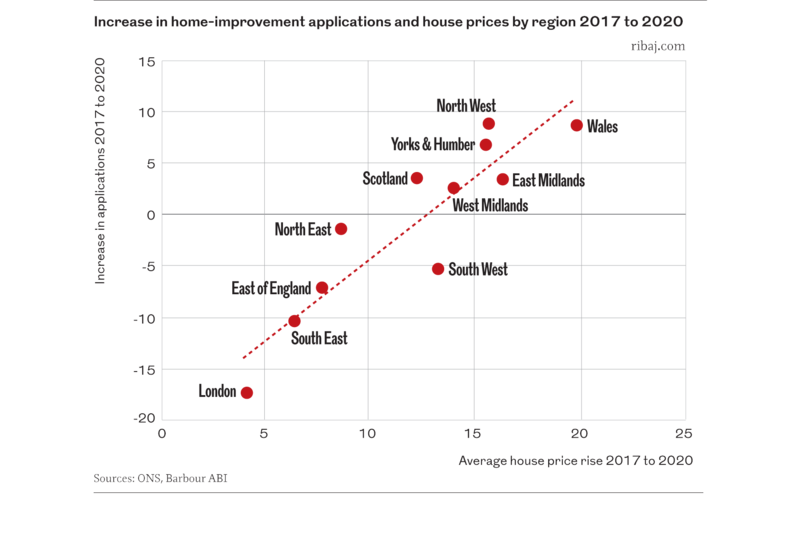 Fears of a pandemic-driven blip

So the recent rises in home buying, house building, and home improvement make sense in that context. But it is difficult to discover the precise causes and effects and how these will play out over the longer term. For instance, how much of the effect is a response to Covid-19 and how long lasting will that be? Meanwhile, how much is down to rather causally conceived policy responses by a government that poured fuel on the housing market just as it was heating up?

Understanding these questions is important if we are to have a clearer view of where we are heading as the shock of the pandemic passes. Lurking in the minds of many and a topic of growing interest is the notion that the pandemic has fundamentally altered our attitude to the built environment.

There is a view that housing, and indeed local communities, will in future play a more central role in attitudes to and developments within the built environment. There are substantial arguments favouring this position. Strong among them is the seemingly unstoppable shift to more working from home and an increasingly accepted view that working locations will be hybrid and flexible. The technology clearly allows for this to happen in a way that was not possible a decade or two ago.

But even though the current mood suggests that construction will be more heavily weighted in future towards enhancing existing homes and local communities, it is too early to say with certainty that this will be the path taken. There are barriers and stumbling blocks ahead. There is a history of inconsistent and often contradictory policy approaches to the built environment. Added to this, without a clearly accepted vision encapsulating the wider national interest, the lobbying power of sectoral interests will be influential. For instance, property owners and hospitality businesses reliant on office-worker trade, keen to maintain the status quo, will surely lobby government to create incentives that encourage more people back to offices.

While long term trends remain uncertain, there seems to be more clarity within the medium-term trajectory of workloads, particularly for private housing RM&I. Here there is a list of positives and negatives. Happily, the positives seem to dominate.

First, the surge in applications will take time to feed through into actual work. Chart 7, taken from Barbour ABI’s The Home Improvement Report, shows a lag of about a year between applications and activity as measured by ONS construction output for private housing RM&I.

The chaos caused by Covid-19 will muddle this relationship, but it bodes well for future work over the next year or so. Also, we need to consider how quickly this work can be serviced by builders. Many small firms are having to push work into the future given the spikes in demand. And it is likely that labour may become tight if, as suspected, many self-employed EU workers returned home. This may have the effect of lowering peaks in workload but maintaining higher levels overall for longer.

The surge in house moves is also likely to lead to a further rise in home improvement as those moving decide to modify their newly purchased old homes to better fit their needs. Given that many of these moves recently will have been prompted by the pandemic and by households moving from higher-value housing areas to lower-priced markets, we might expect many will have factored in funds to improve their newly acquired homes. This hints at a continuation in the rise in home improvement applications.

Working from home will continue to drive home improvement up households’ priority lists for spending. And funding may well be less of an issue for many. The Bank of England estimates that households have accumulated more than £160 billion in extra savings over the pandemic. This is the stock of money not spent due to people restricting their consumer activity or being restricted.

These saving are not evenly spread. The better off have been more able to save, while many poorer households have had extra expenditure. From this we might expect that the better off will have the greatest inclination to upgrade their homes. And with spending on new cars plunging, we might also expect to see a solid amount of this £160 billion being spent on housing in one form or another.

Into this pressure to improve homes that comes from Covid-19 effects, we need to factor the other considerations. There is an urgency to bring the existing housing stock of Britain up to energy efficient standards that come close to being acceptable in a world facing climate disaster. We must assume ever more incentives, both carrots and sticks, to improve housing standards to reduce both energy and water. And there is a growing imperative to refit many of our increasingly elderly homes to make them compatible with our increasingly elderly population.

Some clouds on a rosy horizon

Add all this together and there are plenty of reasons to be positive about a continued rise in housing work, mainly around improvement and retrofitting. But the road ahead is not without potholes.

Among the bigger issues is how the nation exits from the economic support provided by government spending and how tackling the deficit is addressed. How this is handled, and how spending on the built environment features, presents worrying uncertainties. If households become cautious in response to a weakening economy, they are likely to put off big-ticket home improvements.

A boost to construction spending is happening around the globe in the wake of the pandemic. With supply chains already compromised by Covid-19, there have been major increases in prices of materials. This too may prove a drag on home improvement spending.

We have no precedents for what we are experiencing now, but we do know that major disasters create permanent change, sometimes significant, sometimes not, and sometimes subtly and more significantly than we sense at the time. That the pandemic has changed our lives permanently is not in dispute. And this will eventually be reflected in changes within the built environment.

Questions inevitably remain. How instantly will we see change? How significant will it be? And how obvious will the changes be in the buildings we inhabit and the infrastructure we use?

We have some clues, but ultimately only time will tell. In the meantime, things are looking brighter for construction than many may have feared when Covid-19 cases began rising sharply in Britain last spring.