It’s not all about new-build, a closer look at the statistics reveals 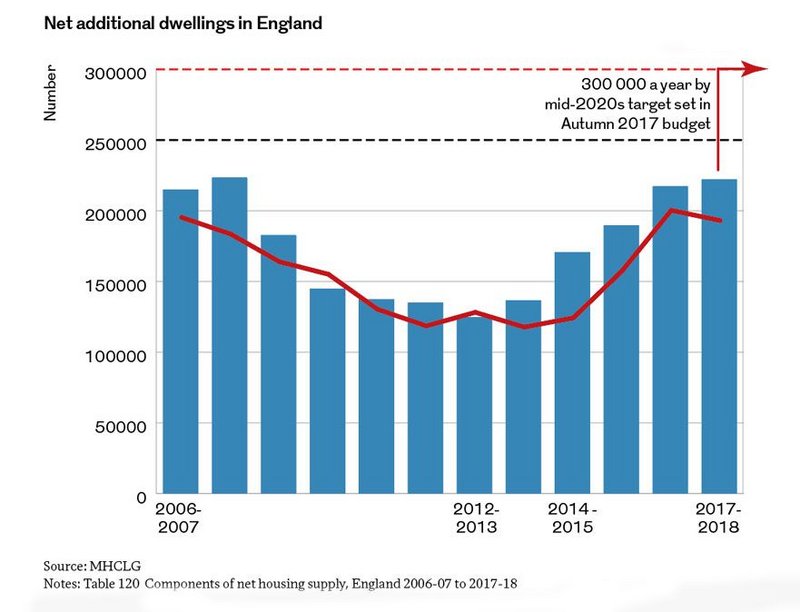 We’ve had a string of housing targets in recent years, though luckily fewer than we’ve had housing ministers.

Even politicians seem susceptible to forgetting that the ‘government targets’ they are discussing are for England and not the UK. Housing is devolved.

Targets present problems. You can chase a target, hit it, and still end up missing the whole point. They are designed to distort behaviour towards a goal. Sadly, you can’t always control everything they distort.

The latest iteration in what has been a morphing set of housing targets was contained in the Autumn Budget 2017. It was ‘to put England on track to deliver 300,000 new homes a year’. This, one assumes, is supplementary to the 2015 manifesto commitment to deliver 1 million homes by the end of 2020.

Last month the annual statistics against which these targets are tested were published. This produced an upbeat assessment from the government of its progress towards ‘ensuring the housing market works for everyone’.

So, what should we make of it all? Let’s start with the first three paragraphs of the press release. They read:

‘This represents the highest level of new homes delivered across England in all but one of the last 31 years and brings the total number of additional homes delivered since 2010 to 1.3 million.

‘Today’s figures demonstrate more desperately needed homes are being delivered – a vital step in ensuring the housing market works for everyone – and that we are on track to deliver 300,000 homes a year by the mid-2020s.’

The bald figures look encouraging. The level is still slightly below that of 2007-08, but a rise of almost 80% over three years is impressive.

About 540,000 were delivered in the three years (roughly) between the 2015 manifesto pledge and March 2018 and at the current rate of delivery, assuming no increase, the number should hit 1 million by mid-2020.

However, the target of raising the annual rate of delivery to 300,000 homes a year by the mid-2020s might prove a struggle. It would mean an extra 10,000 homes each year. That may seem achievable given that the average increase in the delivery rate has been almost 20,000 over the past five years, but the economic backdrop makes it look like a stretch.

Private sector sales represent the bulk of delivery. Here the market is showing signs of weakening, with London’s housing market spluttering and Brexit hurling a toolbox of spanners into the works.

Moreover, we also don’t really know to what extent a backlog of demand, built up during the recession, boosted the market over the past few years. If it was a lot, then we should curb our optimism.

It may prove a tough task to squeeze significantly more growth from the traditional housing sector. Other players in the market are looking more eager – housing associations, local authorities and build-to-rent – though their shares of total delivery are small relative to the traditional house builders.

Looking solely at the numbers, the government could, but more likely will not, hit both its housing targets. But is that the real issue?

Politically the numbers matter. Yet bigger concerns, recognised by housing researchers, may well be found in the text rather than statistics within the press release.

In just three relatively simple paragraphs there is significant potential for misunderstanding and the acceptance of various assumptions that demand to be challenged.

On the issue of misunderstanding, the casual reader could easily be left with the impression that the 222,000 relates to newly built homes. It doesn’t. It is net additions to the stock (see Chart 1).

If you read the further information section, you get this:

But how easy is it to miss that, or for the journalist not bother to highlight it?

The data series tracking these variables is the Housing supply: net additional dwellings, England. And if you trace the series over time it becomes more obvious why understanding the components of net supply of housing matters.

This is not to play down the importance of building new homes. The 195,290 new homes delivered is impressive in the light of recent levels of building. It represents an expansion of almost two thirds since 2012-13.

But an increase in stock is very different to a rise in new-built homes. What constitutes a rise in housing stock – the real target – is a combination of factors. So, in the year to March 2018, in the City of London there were only two new-build homes, but the stock rose by 138, mainly because of change of use to residential. Meanwhile in Christchurch there were 153 new-build homes, but the stock rose by just 100 because 63 homes were demolished.

One could argue that the big story in the net additions figures, other than the rise in new-build, is the rise in change of use, more than twofold since 2012-13 – a large part made up of changing offices to homes.

Arguably of even greater note, taking a longer-term view, is that we currently demolish very few homes – remarkably few compared with historical norms, which themselves were low by international standards.

Here’s a fun stat, based on the data available. If we continue to demolish England’s existing housing stock at the same rate as the past five years, there’d still be plenty standing in the year 4018. It’d take us 2,350 years to knock down the lot. 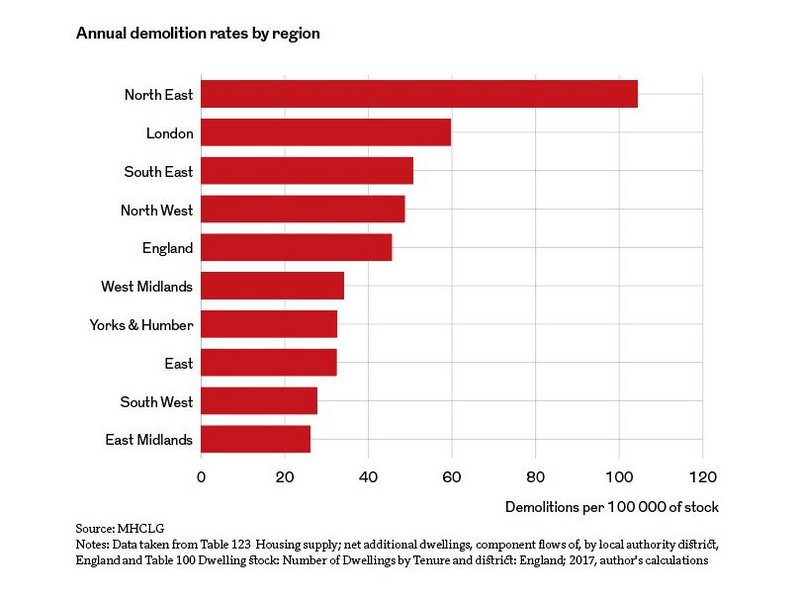 And as Chart 2 shows, the rate of demolition varies widely by region. It would take about 4,000 years to demolish the existing housing stock in the East Midlands at current demolition rates.

People eagerly point to the 1930s and 1960s as times when housing was being delivered at more acceptable levels than now. It’s true that in those periods house building was high, but contributions from change of use or conversion were low and loss through demolitions was high.

If we hit 300,000 homes a year for any sustained period it will represent the fastest growth ever seen in the English housing stock. The data are a bit ropey, but in the 1930s the annual rate of growth in the housing stock was not much over 200,000. Although 425,800 homes were built in 1968, the average annual increase in the stock over the decade was around 240,000.

With that in mind the 300,000 target looks more impressive than it might otherwise. So, it is not all about building new homes.

This leads to a deeper concern among many housing experts, the need to consider housing more holistically, to look beyond new-build homes. Yes, we need to work out how best to add housing, but we also need – at least in the public dialogue – to take account of how to transform and improve existing homes, how and when to change other buildings into homes and how, when and where it is appropriate to demolish homes.

This view is at odds with the implied assumption within the wording of the press release above – that ensuring a ‘housing market works for everyone’ is largely a matter of delivering more homes.

Building more homes matters, especially to satisfy a rapid rise in population. But it also matters what we build and where we build. This is easily lost when the target focuses on an aggregate number of ‘units’ built.

So, what have we been building? The matter becomes confused in people’s minds, not helped by statements persistently trotted out without reference to the latest data, such as ‘we build the smallest houses in Europe’ or ‘we build much smaller homes than in the past’.

Based on the most reliable data the average English home is about the same size as an average home in other large European nations. What’s more, over the past few years new-build homes have been larger on average than the average existing home, according to the Office for National Statistics.

We are building more on greenfield sites than a decade ago, with a far higher proportion of houses to flats, which chimes with building bigger homes. 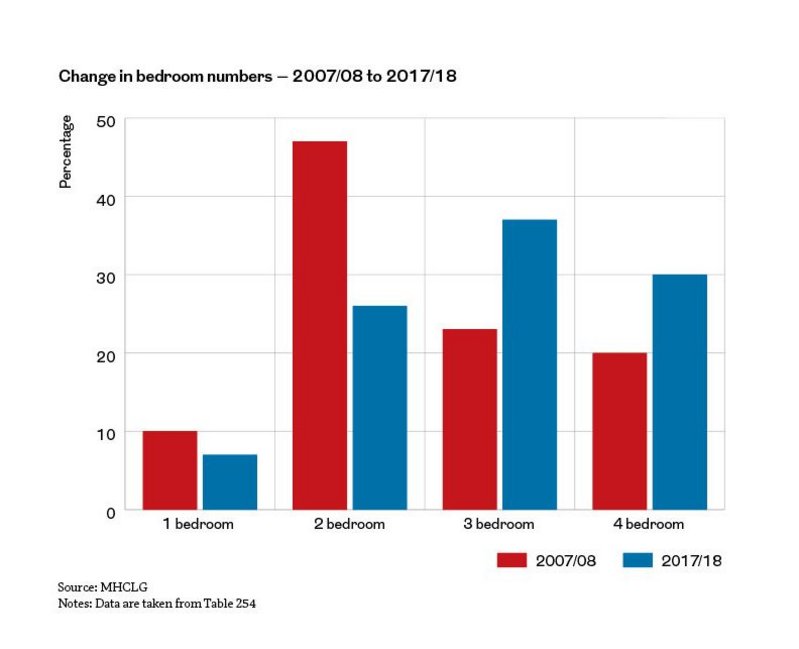 This illustrates how the mix – by type, tenure, setting, layout – of new housing varies greatly over time and can change quickly. This should be no surprise. Any change in the needs of the population or in market demand will be reflected and magnified in what we build new, as new build represents such a small part of the overall stock.

But housing targets, largely through attempting to be simple and easily understood, seem to reduce the challenge to a numbers game, treating homes as equivalent units.

They easily ignore other factors too. For instance, the impact of communal accommodation (notably for students) on local housing markets can be large in university towns and cities.

Figures show a net gain of more than 25,500 student bed spaces in the three years 2015-16 to 2017-18. This is roughly equivalent to reducing the annual demand for about 2,000 homes, were the students to share homes instead of taking up newly created student accommodation. But the pattern and the impact vary greatly from city to city and will vary over time as phases of student accommodation wax and wane.

In Brent in north-west London, for example, there has been an increase of about 3,200 student bedrooms over the past three years. Assuming they had not been built, and the students shared existing housing four to a home, they would occupy about 800 homes. That is equivalent to about a quarter of the increase in housing stock in the borough, so clearly it has eased housing stress significantly.

In fairness such matters are accounted for at local level, but in focusing on simple national targets the importance can be underplayed or missed.

As for the ‘housing crisis’, it is not a single homogeneous problem – not enough homes – it is complex and very varied between and within regions. National policy is largely determined in London, and tends to be framed in the light of the problems of housing in London. This is a danger.

London has seen a large increase in population for a sustained period. It has, as have other large cities, seen its population profile distorted heavily in favour of younger adults. Its housing crisis is very different to the problem in former industrial towns in the North East where populations have declined, or in coastal towns that have high levels of deprivation and a crumbling housing stock, or in rural areas where the average age has risen sharply.

For all that, perhaps more worrying for the housing cognoscenti is the presumption that we can measure the number of homes we build with reasonable precision against a target. Sadly, we are not that good at counting houses, either those that are standing or those newly delivered.

The eagle-eyed looking at Table 120: Components of net housing supply, England – the dataset against which the housing targets are measured – will notice an adjustment of 16,190 to the net supply figures before 2011. This revision, ranging between 7% and 12% over five years, was made after the homes were counted in the census.

That, of course, raises an important question. Will the numbers we are analysing now remain the same after the census 2021? On past record, no.