The data shows policies to reduce regional inequalities have had little impact so far while Liz Truss shows little appetite to make them a priority, says Brian Green 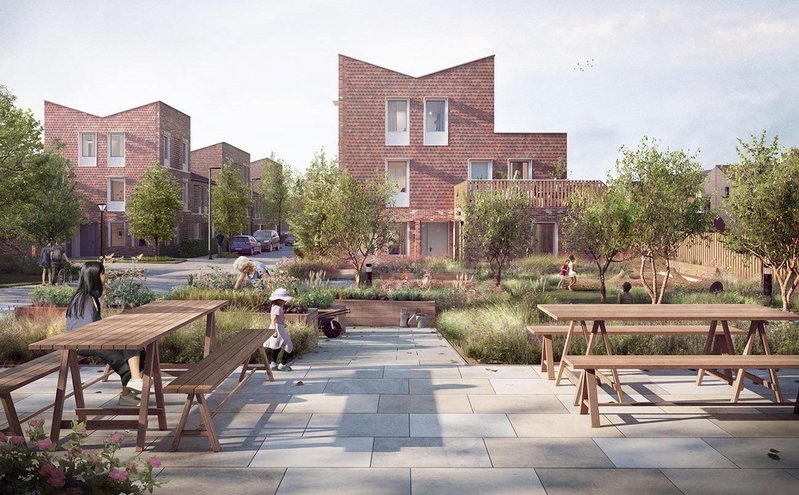 The imbalance between north and south has a significant impact on housing. Here are Mikhail Riches’ plans for Ordnance Lane in York. Credit: Mikhail Riches/ Darc Studio

When Boris Johnson made his first speech as prime minister, he talked of recovering our 'natural and historic role' as an enterprising, outward-looking, and truly global Britain. He also said 'we are going to level up'. The latter phrase became a signature policy.

The sentiment is widely applauded but the broad sweep of a policy has presented many conundrums as to what the policy means in real terms, what real and lasting change is feasible, and how quickly it can be achieved.

The idea is hardly new, being more a reframing of very longstanding political aspirations to narrow gaps in an increasingly economically and socially uneven Britain. Now with Brexit providing more dead weight than bounce to the economy, the cost of Covid substantial, and with a period of extreme social, political, and economic volatility ahead, the promise of strident levelling-up policies taking root is fading fast.

As Johnson looks to his next career move and Liz Truss grabs the reins of the UK’s increasingly tattered economy and fractured society many questions will linger. High on the list will be: what becomes of levelling up?

The notion of levelling up has a long history. Indeed, the Barlow Commission report of 1939 stemmed from concerns over the uncontrolled internal migration to the south-east of England. Among its recommendations was the creation of new towns.

The scale of migration north to south was significant and growing, putting pressure on the south-east and leaving the north economically weakened. The primary cause was uneven job opportunities. It was a period when services and lighter industry increasingly took over as the big drivers of employment while the capacity of heavy industry to generate jobs waned. Between 1921 and 1931 employment fell in the north of England by 1 per cent while in the south-east it increased by 24 per cent. Job opportunities are a major magnet in migration, so the period experienced a major drift in the population towards London and the south-east.

There are good reasons to suggest the policy prescriptions put in place to distribute employment and population did work. Between 1951 to 1971, while employment in the north continued to fall, the pace of decline eased. East Anglia saw the biggest growth in employment (27 per cent) while the south-west saw 14 per cent growth – twice the national average. Both, heavily reliant on agriculture, had seen a fall in employment over the 50 years up to 1921, despite the national workforce expanding by 40 per cent.

Economic data suggests levelling up continued through to the mid to late 1970s. For instance, GDP per capita in the north of England rose from 84 per cent of the national average in 1966 to top 95 per cent in 1977. Then came the recession of the 1980s, which hit heavy industry and the north hard, taking that measure once again below 90 per cent.

The lessons from this scamper through the history of levelling up tell us much. It can be achieved but it takes bold policies over decades to turn the tide. Any gains made also need to be supported or they are likely to reverse.

The economic shock treatment in the 1980s accelerated a pre-existing shift from an industrial-based economy to one dominated by services. This favoured the south of England, with London’s power as a global financial centre a magnet. Few policies were put in place to counter the effects elsewhere, outside of the Michael Heseltine-inspired regeneration efforts.

This catalysed a flight to the south, mainly of younger well-educated people from the less-thriving home cities, towns, and villages of their birth to 'get on their bikes' and head for London. Between 1981 and 2021, London’s population expanded by about a third, the south-east’s by more than a quarter and the east’s by almost 30 per cent. The population in the north-east fell continuously until 2001 and has only recently lifted above its 1981 level.

Which brings us to where we are today and what lies ahead.

A year or so ago there was a view that the pandemic might accelerate levelling up, particularly as it seemed to have inspired a flight from London and rekindled a latent desire for a more rural lifestyle. The official figures show that the biggest hit taken was in the south-east. The figures also show London rebounding the strongest since 2019. So whatever impact the pandemic had on levelling up, it was not straightforward.

But unquestionably, the pandemic did accelerate a previously sluggishly growing trend towards greater working from home. This will, over time, play a role in levelling up, if only because it loosens the powerful age-old link between where people live and where they work. This is a key factor in regional inequalities. However, the effects prompted by greater working from home are likely to play out over decades rather than years. And they are likely to be more complicated than we might imagine.

Turning to the present, while the economic and social forces that lead to regional inequalities are many and complex, one thing we can be reasonably sure of is that those forces will strengthen as the cost-of-living crisis bites. It will hit the poorer families and poorer areas harder as a higher proportion of their income is spent on fuel and food than by those in richer areas.

Looking at the progress so far, there are very few clear signs that any efforts made to meet the levelling up agenda are influencing construction activity. Barbour ABI regional data for the value attached to planning applications and contracts awarded provides some insight if, for simplicity, we frame levelling up as a north-south balance. Comparing the northern regions of north-west, north-east, and Yorkshire and the Humber with London and the south-east on a per capita basis shows no obvious signs of an uplift in the north. 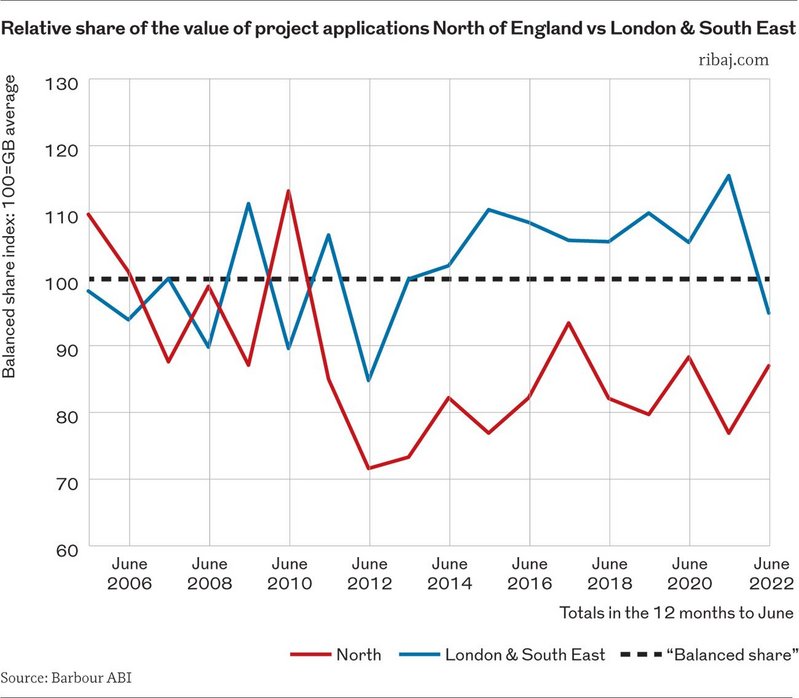 Charts 1 and 2 use, for illustrative purposes, a 'balanced share' line set at 100 to represent a national benchmark. If work is evenly shared relative to population across the English regions, Wales, and Scotland, they would all follow this line. Below the share is lower, above greater.

Chart 1 shows that since the recession of 2008, the value of projects at the application stage has been far weaker in the north than the national average, and stronger in the south-east until very recently. Currently, Scotland and the east of England are enjoying a boost. Chart 2 shows how for some while the value of contracts awarded has been reasonably evenly spread between the north and south since 2021 with a bias to the south.

While both fail to show any impact of levelling up so far, they both accord with the notion that recessions hit the north harder than the south. This echoes some lurking fears that the cost-of-living crisis will make levelling up a far harder task. 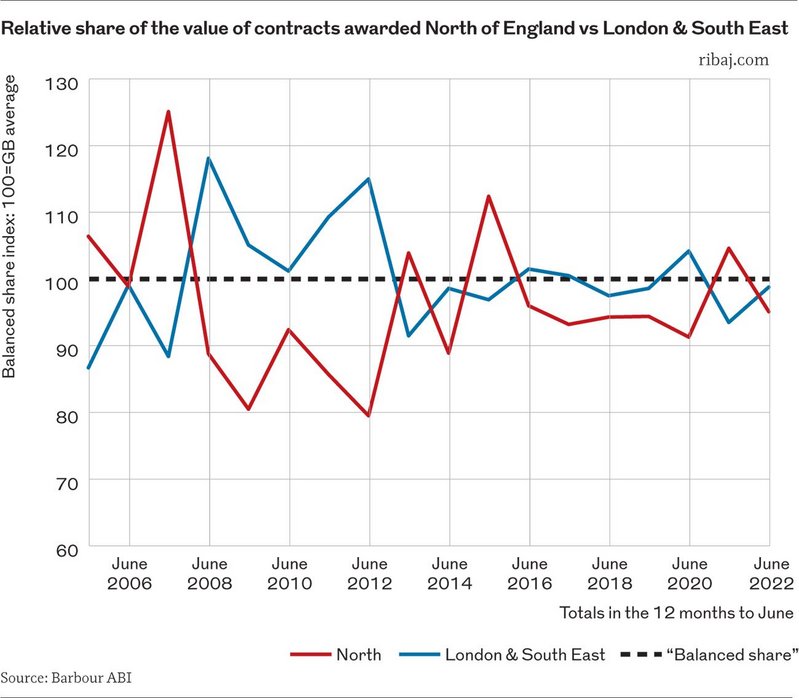 Turning attention to the future, the messages from the final two candidates in the Conservative party leadership battle were revealing on the subject of levelling up. They gave it few mentions and low priority.

Indeed, Truss displayed a remarkable lack of instinctive appreciation of the issues involved. Her punt at a policy to pay lower wages to public employees living in poorer areas would work against levelling up, locking in regional inequalities and disincentivising movement to lower-paid areas. It is no surprise that it was withdrawn. Meanwhile, Rishi Sunak’s concerns over the rising public debt may have been played down by Truss in the campaign, but will be a major concern among Conservative MPs, which points to a tightening of the public purse strings.

Despite it not being her own policy nor perhaps high on her list of priorities, Truss will inherit the challenge of levelling up. She will recognise the widespread support across the political divide and that many in the Conservative party machine see it as key to holding red wall seats in the north.

However, neither the economic realities nor the instincts of many in the Tory party’s southern-based membership are likely to be favourable to levelling up over the next few years. Could it be then that the levelling up agenda will fade into the background?

If so, in the not-too-distant future we may see a new nameplate on one of the major government departments critical to the development of the built environment. Civil servants will be out of the Department for Levelling Up, Housing and Communities and deployed in some new reconfigured department. But the challenge to level up will remain to be addressed another day.