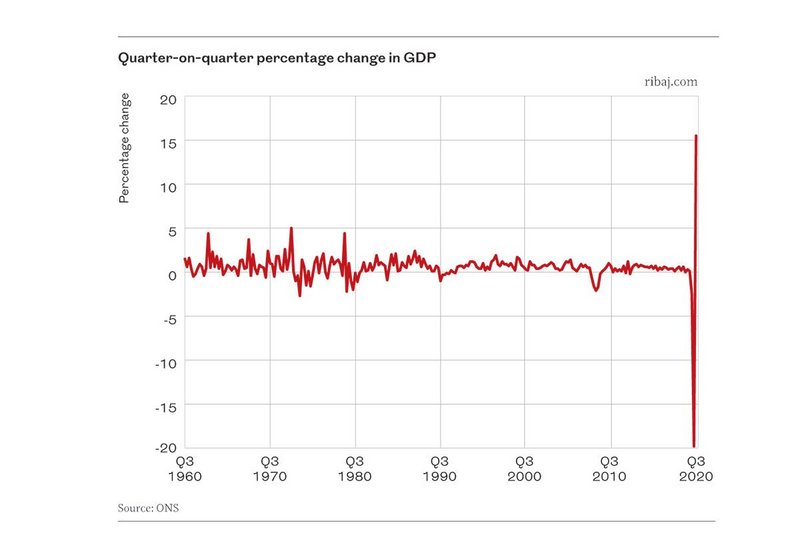 Shocks to any system cause paradoxical effects. The pandemic is no exception. It has jolted both society and the economy, prompting big changes and small. Some were predictable, many were unexpected.

House prices jumped despite indicators pointing to a nasty recession on the horizon which would normally herald price falls. The economy plunged, but many households found themselves with healthier bank balances than they’d seen for years, if ever. And who’d have thought Zoom book groups would become such a big thing?

The plethora of predictable and unexpected effects is perplexing. That makes interpretation very tough. Each notable change seems to pose questions. Is this short-term and temporary, simply reflecting an immediate response to a crisis, or is it a sign of emerging longer-term trends that will indelibly mark our future path?

When the release of lockdown sparked a ‘race for space’ among house hunters keen to get bigger homes and more outside space it presented house builders, planners, and architects with questions: Will it blow over, or will this continue? Do house builders and architects simply pick any available ripe fruit now or invest in cultivating a more long-term offering? Other questions also nag at us as we pick through the fall out. Will homeworking become the norm for a large part of the working population? If so, what might that mean for what we build, where we build, and what we design? Distinguishing mirages from solid change will not be easy.

Even if we can reasonably pick future trends, the relationships between construction and location are intimate, interlinked, and complex. Any shifts in demand for construction, short and long-term, will play out differently in each market sector in different parts of the country. Furthermore, change in one region has implications for others.

Inevitably the national background sets the tone for regional changes. In a few charts we can begin to grasp the impact of the pandemic. Chart 1 is astonishing. Since GDP became the benchmark economic measure after World War II it has never plunged in a single quarter anything like it did in 2020 Q2. Yes, GDP bounced back in the third quarter. But it remains around 10% down on the level a year ago.

The effect on construction has also been startling. Chart 2 shows how production dropped to almost half in April, with house building down more than 60%. And Chart 3 captures the beginning of the toll this is inflicting. Job losses lag hits to the economy. But already employment is feeling the pain. The numbers employed in construction fell 7% over the 12 months to September 2020 to the lowest level in seven years.

Looking at the wider picture, between March and September employment across the whole economy fell by almost 500,000. Notably the number of non-UK born people employed in the UK dropped by more than 700,000, suggesting high levels of repatriation and low levels of inward migration. 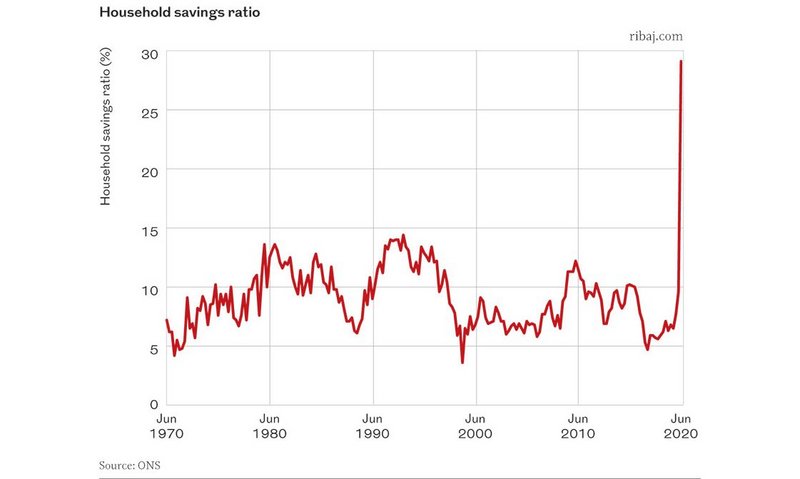 But as is common in economics, positive quirks can flow from bad events. Chart 4 shows that households on average boosted their bank balances more than ever. Unable to spend (and generate GDP), households saved £12.5 billion more in the first quarter of 2020 and £78.9 billion more in the second quarter than they did a year earlier.

Importantly these are net figures. On balance households with incomes above £35,000 saved more while those on less borrowed more, according to Bank of England data. So, we can assume the UK’s wealthier households have between them an unexpectedly large pot of extra money saved which likely tops £100 billion from just the first half of this year. 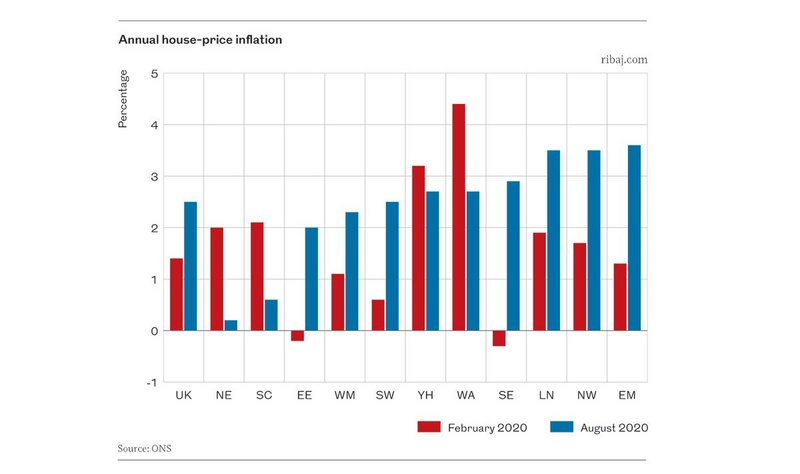 This leads to another quirk, rising house prices. As we see in Chart 5, UK house price inflation paradoxically picked up between February and August. Not what you’d expect with a recession looming large. Interestingly, it rose differently in different regions, with those in the south of England seeing a boost, while house-price inflation fell noticeably in Scotland, the North East, and Wales.

Part of this will be down to the stamp duty holiday. But Richard Donnell, research and insight director at Zoopla, believes that the UK has experienced a ‘once in a lifetime re-evaluation of housing’ in response to the pandemic. His analysis finds that the weight of house sales has shifted from poorer areas to wealthier areas. He reckons that re-evaluating housing, which generally manifests as buying bigger homes or homes with more outside space, has been the big underlying driver of demand, with stamp duty savings more of an ‘added bonus’.

It’s in these quirks that we begin to see where regional differences and nuances come into play, how they might have differing short and long-term effects, and, from the perspective of architects, how they might might influence where the work will be in future.

In wealthier areas, weighted to the south eastern regions of England, the decision to buy a bigger house or improve the current home will support work in home improvement and house building. The same may be true of areas coveted by émigré city dwellers. In less well-off locations, clustered in the North East or Wales, for example, plans may well be shelved. 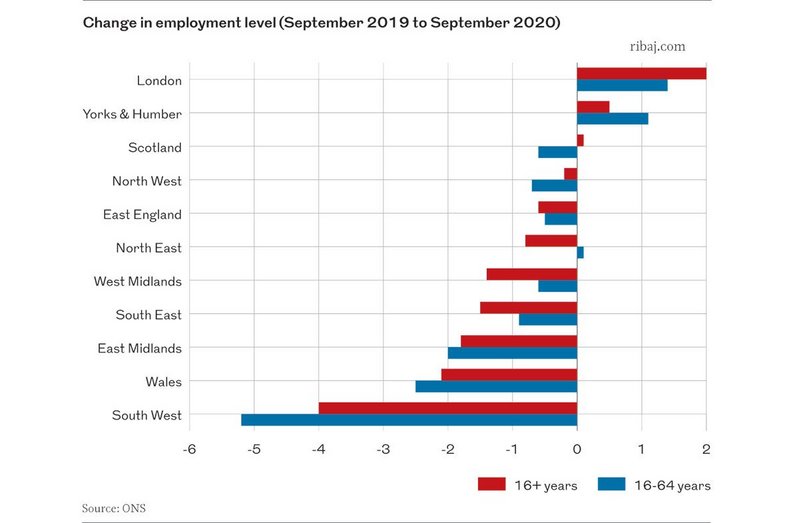 Other paradoxes appear when we look at how the pandemic has hit local economies and jobs. The South West was far less affected directly by the virus, with lower infection rates. Yet, as Chart 6 shows, the economic pain has been far more acute with a heavy hit to jobs in a region heavily reliant on tourism and hospitality. Not that this will be consistent across the region, the pain will most likely be seen in hard hit pockets, with other areas possibly experiencing some economic upsides resulting from the pandemic.

While London seems in Chart 6 to come out looking buoyant, this disguises what London is – an exception. It sucks in employment from all around, so a large proportion of job losses stemming from cuts in London-based businesses will show up in other regions, as the data are residence based. Furthermore, many more Londoners can and do work from home, given their mix of occupations, as we see in Chart 7. Meanwhile, office cleaners, maintenance workers, shop assistants, along with many others including a host of those associated with hospitality, may well commute in daily from outside the capital.

So the picture emerging from short-term employment indicators might seem at odds – indeed be at odds – with deeper underlying longer-term trends.

These might include a surge in emigration to other regions by well-to-do Londoners caught in the ‘race for space’ in the housing market. A relative trickle now, it could be the beginning of a steady change. Meanwhile, the constant chatter about more flexible work patterns with more employees working from home suggests this is an inevitable trend. It probably is.

At first glance, both these potential long-term trends should affect London more than any other region – and, one might imagine, negatively. Yet there is no sign of a particular decline in appetite for construction in the capital, judging by the cover notes to Barbour ABI’s October 2020 Economic Construction Market Review. The second note reads: ‘London was the leading region with 22.6% of awards.’

And if we delve deeper into Barbour ABI data and compare the value of contracts awarded for the year to October 2020 with the year to October 2019, it seems London isn’t suffering from a drought of work in the pipeline, as Table 1 shows. And, as we know – and as is underlined heavily in Chart 8 – London remains a powerhouse for construction.

It has also become a Mecca for architects as its global reach has expanded in recent years. In recessions this has proved a lifesaver for many in the profession. But with the impact of the pandemic curtailing foreign travel, the meeting and greeting needed to make new contacts has become trickier.

This may be one reason why the September RIBA Future Trends noted: ‘Only London and the South returned negative future workload figures this month.’

As we look regionally, what emerges is the importance of appreciating the different drivers and the variety of the effects created by the pandemic. Inevitably Covid-19 has catalysed potentially huge change. We all sense that, even though the pace or magnitude of that change is hard to assess.

Returning to the residential sector, if Donnell’s assessment is right and households have re-evaluated housing, this points to greater investment by households either in buying or improving their homes. It also suggests a shift in the product mix of house builders – notably from flats to housing. This has huge regional implications.

Meanwhile in the non-residential sector, the flow of work seems to be coming through at present, whether driven by hard-headed thinking or simply organisational momentum. There seems little doubt though that investment for new offices or retail space will become much harder to come by. But existing offices will need to change to meet new demands. This will generate work for architects.

This is a tough time for all. It would seem that the pragmatic approach is to take any sensibly priced short-term opportunities where you can, while keeping an eye on the evolving longer-term trends and the inevitable opportunities arising as we emerge from the constraints caused by the pandemic. And keep an eye on changes in the regions: the coronavirus pandemic may have provided cause to challenge some long-held assumptions.