There are signs of progress towards a better balance of gender, ethnicity and socio-economic backgrounds 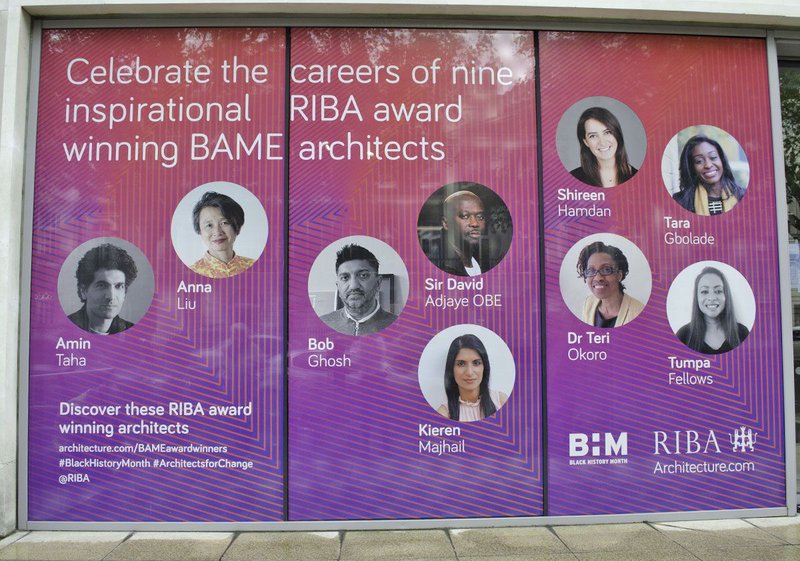 While the RIBA is still working on encouraging diversity, as with this promotion at its central London office during Black History Month, the figures show there is still a long way to go. Credit: Charlotte Collins

Figures released last month by the Architects Registration Board (ARB) provide scope for optimism among those striving to create a profession that better reflects the diversity of the people it ultimately serves.

Yes, 2018 registrations show the number of white men is still disproportionate within the profession. ARB figures suggest they account for about 64% of architects*, significantly more than the 43% of white men within the UK’s working age population. Men overall account for 72% of ARB registered architects.

However unacceptable we may find this imbalance, there has been a marked improvement since 2011 when ARB recorded a female share of 20%, which itself was an advance on the 2003 figure of 14%.

Importantly, there are more encouraging signs of change relating to the gender mix within the ARB figures, and indeed in other data. The gender split produced by ARB for those under 30 shows 52% male and 48% female.

The top-line figures may disappoint those pushing for rapid change. But rebalancing to reflect the population’s diversity is a long struggle, if only because people tend to stay in their chosen profession – for decades. Current diversity of any established profession tends to reflect the past more than the present.

When interpreting statistics, it is important not to focus solely on broad-brush headline figures. They can mislead as much as inform, particularly if we lose sight of the underlying reason for seeking more diversity and balance. Headline figures can disguise important underlying detail that needs to be appreciated when formulating policies.

Here’s a thought experiment. Only 11% of nurses are men, a far more extreme gender imbalance than within architecture. Are the reasons to encourage more gender diversity in nursing the same as those in architecture, or even broadly similar? The most appropriate answer is likely to be: ‘It’s more complicated than that.’ The challenge is about more than balanced quotas. 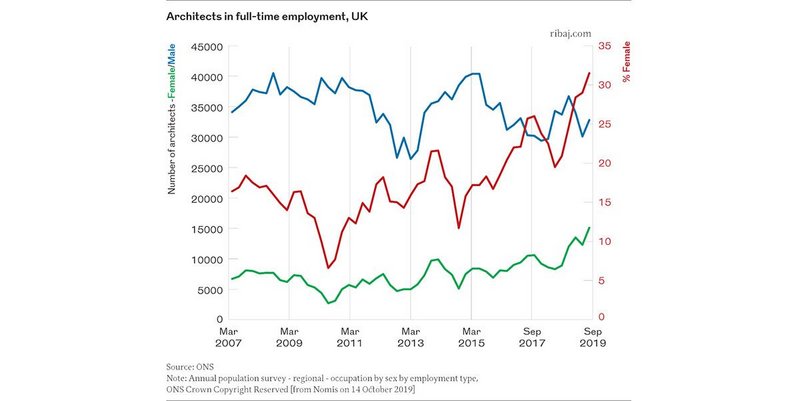 With that in mind, how much progress is being made in diversifying the profession?

Significant strides have been made to level the gender balance, as the ARB data shows. That today 28% of architects are women may seem a poor show, but this share has doubled over 15 years. With overall numbers expanding there are now two and a half times more women architects than there were in 2003.

This growth has been fuelled by a far higher share of female new entrants. The ARB figures show that around 44% of new entrants in 2018 were female. In the years 2011 and 2012 it was 36% and 32% respectively. It is interesting and, given Brexit, important to note is that the proportion of women within the EU new admissions tends to be much higher than for the UK contingent, although that gap has reduced markedly in recent years. In 2017 EU new admissions were tilted 51% in favour of women compared with a 39% female share among UK new admissions.

The overall growth of women in architecture is also picked up by the Labour Force Survey, although the occupational definitions and overall accuracy of the figures may be less reliable due to self-reporting of occupation and small sample sizes. But the pattern presented by the figures is likely to remain highly indicative of change. Chart 1 shows the number of architects in full-time employment by gender and the rapid growth of the proportion of women within the profession. 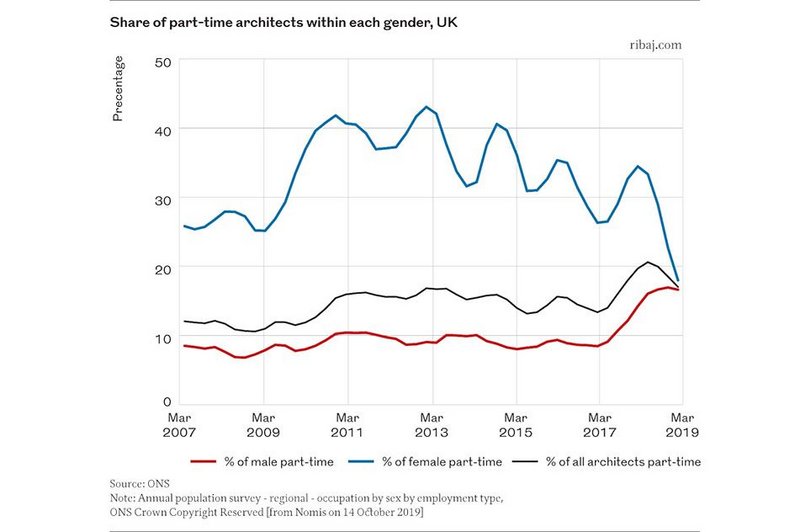 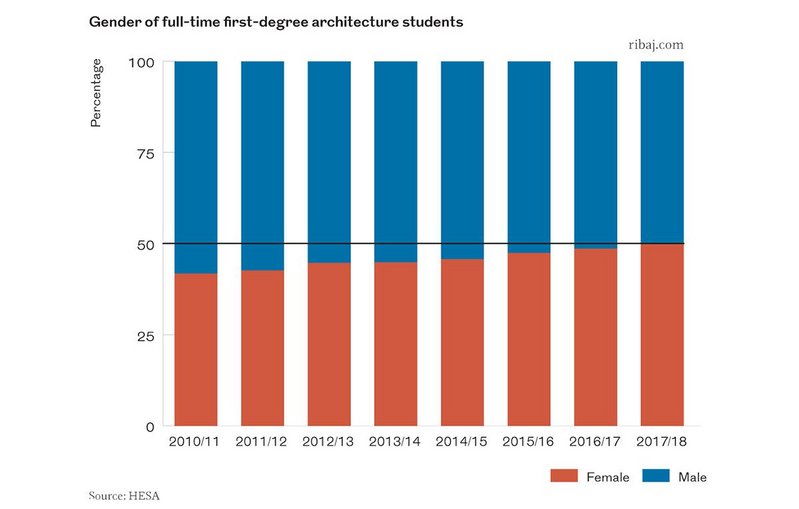 There are reasons to believe the trend towards a more even gender balance will continue. Figures for full-time first-degree architecture students show a trend towards parity as we see in Chart 3. The fall in EU new applicants may slow progress, however. In 2016 there were 1,232 EU admissions to the ARB register. In 2018 the number was 838.

While improvements in the gender balance may be in train, how is the profession doing in other areas of diversity?

The ARB data provide a guide but not a complete picture, particularly when seeking to benchmark against other data. On ethnicity, broadly the figures suggest that 88% of architects are white. That is close to proportions within the 16+ aged population, but above the 85% within the 16 to 64 age group, which broadly mirrors the potential working population.

However, ethnicity varies by region and by urbanisation, as do the workplaces for architects. This should be noted when assessing what might constitute an inappropriate ethnic mix when judging diversity. So, for instance, architects are heavily weighted in London as are ethnic minorities. On that basis we might expect statistically a far higher proportion of ethnic minorities in architecture if we were judging parity at a regional or more local level. Equally we need to consider age, when looking for a balance in ethnicity. The proportion of ethnic minorities is higher among the young.

A less obvious but increasingly important measure is that of participation from less well represented communities. The POLAR (the participation of local areas) measure of the proportion of students coming from each area is used by the Office of Students as a measure against which universities are tested on diversity. This measure tends to pick up and map the level of social advantage or disadvantage, which in turn reflects imbalances across both social and economic class and ethnicity. The official data produced by the Higher Education Statistics Agency (HESA) picks up this measure and also measures the proportions of students from state-funded and fee-paying schools.

HESA kindly provided RIBA Journal with a cut of data for UK domiciled, full time, first year, first degree students in principal subject (K1) architecture 2013/14 to 2017/18 and for the equivalent for all students. 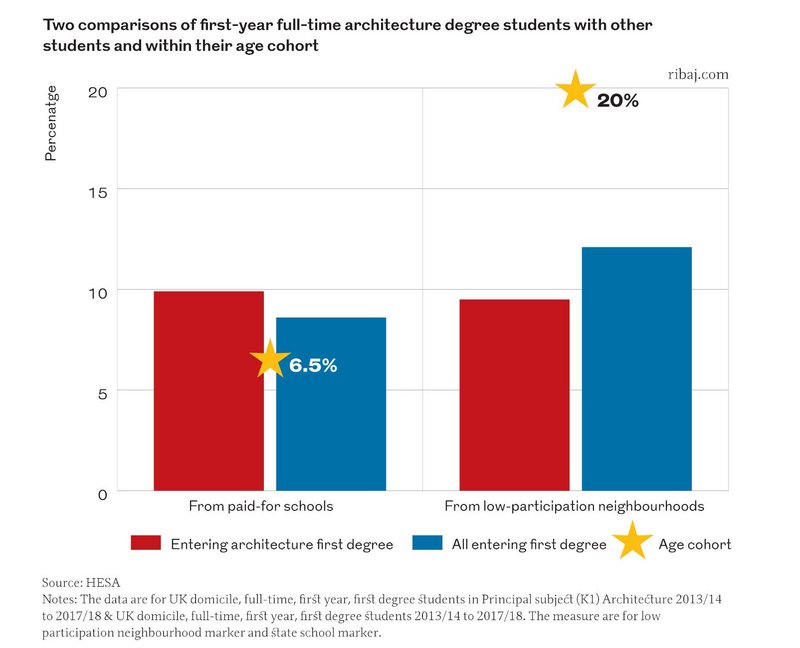 Chart 4 shows these pegged against what we might expect if there was balance statistically, the star. On the left we see the proportion of the architecture students privately educated was 9.9% compared with 8.6% for all students. The star marks the figure of 6.5% that represents how many within the age cohort are privately educated in the UK, based on the figure provided by the Independent Schools Council.

On the right of Chart 4 we see the data on low participation neighbourhoods. This shows that 9.5% of the architecture students hail from the areas which are in the lowest quintile (bottom 20%) for participation in higher education. The equivalent figure for all students is 12.1%. Given the measure is for low participation areas by quintile, we would expect 20% if participation was evenly distributed.

Simply put this points to architecture students coming from noticeably more privileged backgrounds and neighbourhoods than the average UK student or the average person of their age.

To add more flavour to this and look at the profession more widely, we can use the social mobility measure within the quarterly Labour Force Survey to check for potential privilege among architects currently in work. One approach is to look at the broad occupational status of the main-earning parent for each listed occupation, looking for instance at the proportion who had a parent in the three regarded as highest ranking among the nine major standard occupational groups (managers, directors and senior officials; professional occupations; and associate professional and technical occupations).

Averaging the data across the years 2016, 2017 and 2018, we found 52% of architects had parents in the higher three occupational groups, compared with an average of under 43% across those in work. The score for architects is well below the 81% for barristers and judges, but equally well above 40% for construction project managers.

Given the growing complexity around diversity and in judging fairness on these matters, the figures above are relatively crude. But they clearly underscore what architects and the RIBA already know – that the profession draws its pool of people in a way that poorly reflects the diversity within the population at large. The figures do, however, also suggest change is afoot in some areas.

Were we to write the summary to a progress report for diversity among architects, we might fairly suggest that solid progress is being made. But there is still lots more to do.