One of the many peculiarities of the general election campaigns was the dearth of debate about housing. It is a major national issue, but it was largely submerged beneath the agenda Theresa May set that pushed to the fore the leadership qualities needed for the Brexit negotiations.

The timing of the general election announcement managed also to overshadow the appointments of six metro mayors. These are key appointments in developing housing policy in their areas and they are potential catalysts for new approaches, with stronger ties between housing, transport policy and infrastructure, to tackle what is increasingly regarded as an ever deepening housing crisis.

Certainly, housing will be high among the priorities of the six newly-installed metro mayors. Polls in their areas consistently show housing well within the top three concerns of local residents. In 2015 these six areas accounted for just over 17% of both the population and housing in England. This may not be a dominant proportion, but it’s certainly a sizeable chunk and the success or failure of the move to metro mayors will spread well beyond their borders.

The housing challenge facing each mayor will be different, not least because they will not be immune to the election outcome. Policies to curb migration and success in implementing it will have potentially profound, but definitely variable, implications for housing demand in their areas.

Statistics easily miss nuance, but to gain insight into the scale of the tasks ahead it is worth pulling some together to indicate the pressures and challenges facing the newly-installed mayors. These should offer pointers to where housing-related construction work might move in the future in these areas. 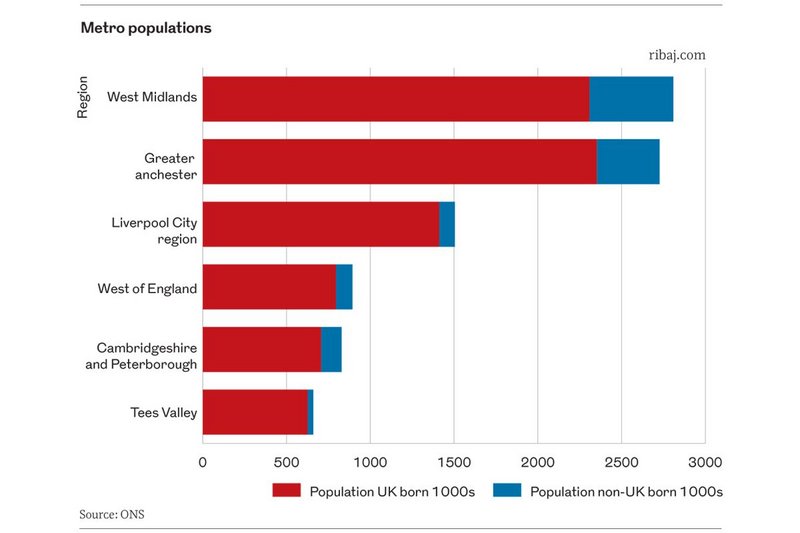 It’s probably worth starting with population. Ultimately population and demographics determine the need for housing. Chart 1 shows the combined populations of the constituent districts within each mayoral area. These are for 2015 and show both UK born and non-UK born residents.

However, it is the forces of change that tend to have most impact on housing need. Looking at how the populations have changed over the years 2005 to 2015 all areas have seen growth, as we see in Chart 2, with Cambridge and Peterborough by far the fastest growing. This growth in many ways explains why the area has seen some of the most rapid house-price growth in recent years and why Cambridge ranks second on house prices to London in Hometrack’s UK 20 City Index. 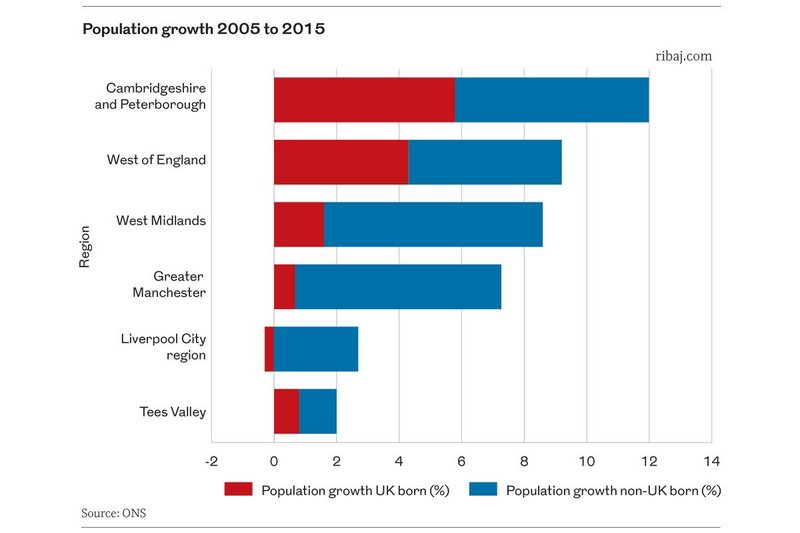 With all the talk of migration and globalisation, it is interesting that the growth in the population in the Cambridge and Peterborough area has been proportionately lower due to non-UK born people than is the case in the other metro mayoral areas.

Indeed, take away the influx of non-UK born migrants into the Liverpool City Region and its population shrank between 2005 and 2015. 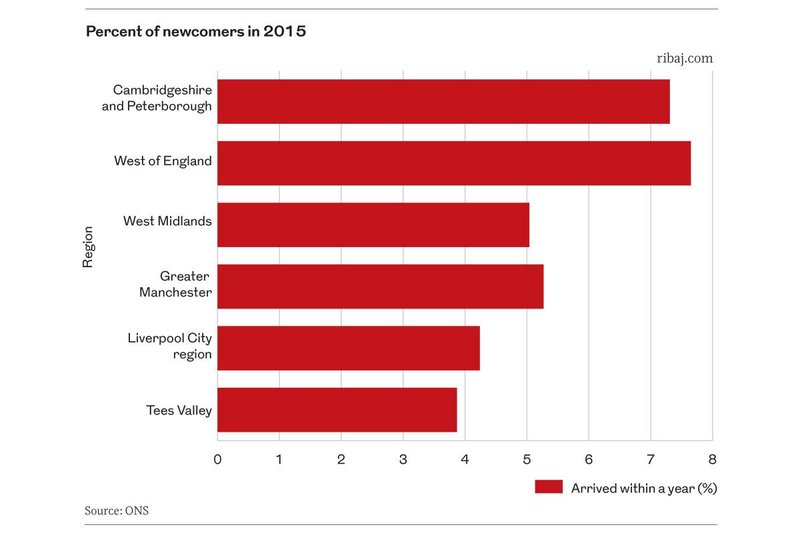 Looking at the latest figures at local authority level, for the period 2014 to 2015, the West of England led on population increase. It also had the most fluid population between 2014 and 2015 (Chart 3). Of its 2015 population, 7.7% were newcomers living there less than a year, coming either from the rest of Britain or abroad. On this measure Cambridge came second with Tees Valley the least fluid, newcomers here making up just 3.9% of its 2015 population.

The key points however are that the populations of these areas have been growing and international migration has played a big hand in the rate of growth. International migrants also represent a growing proportion of the current population and so form a significant part of the demand for housing.

This leads us to consider how the stock of housing has grown to accommodate the expanding populations. The past few years have seen a sharp drop in the proportion of vacant homes. In Greater Manchester and the West Midlands, for instance, the number has more than halved.

If we add in the reduced number of vacant homes between 2005 and 2015, the increase in what might be seen as stock in use has broadly matched the expansion in the population over the period. Indeed, in all but the West Midlands the useful stock per head has increased. 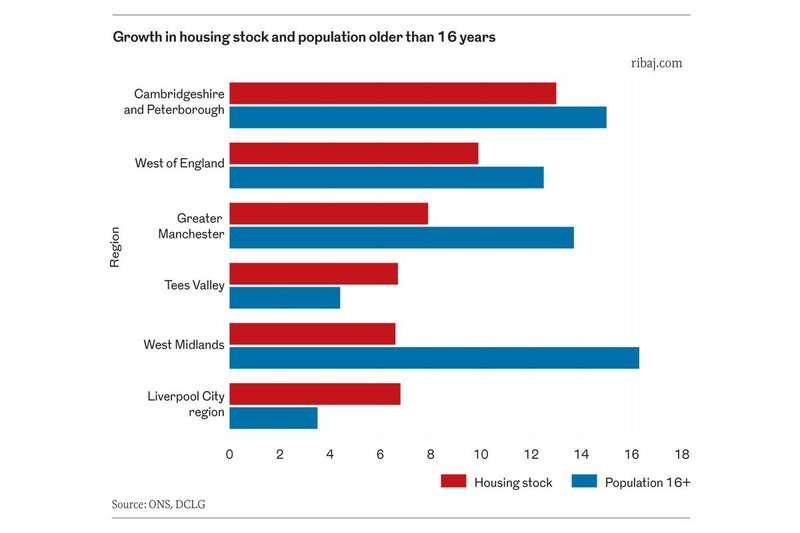 However, taking this as satisfactory would be rather to miss a major point: the age distribution of the population has changed, as has the shape of households. With the population ageing there are significantly more adults, which means the number of ‘natural’ households should have increased above the rate of population growth. How much is a matter of debate, which clearly involves social, cultural and aspirational norms.

As Chart 4 shows the number of people older than 16 has expanded faster than the housing stock in all the areas with the exception of Liverpool City Region and Tees Valley. This suggests growing pressure on the housing stock.

This in turn poses the question of how pressure on the housing stock is translating into construction work in these metro areas.

One thing is very clear in the data: where the population is growing fastest less of the stock is being demolished. A house in Tees Valley is more than five times more likely to be demolished than a house in Cambridge and Peterborough or the West of England.

This often-ignored statistic on demolitions speak volumes, not least about the stress on housing supply. Were the current rate of demolitions, as seen over the past four years, to continue it would take more than two millennia to demolish the existing stock of homes in England. 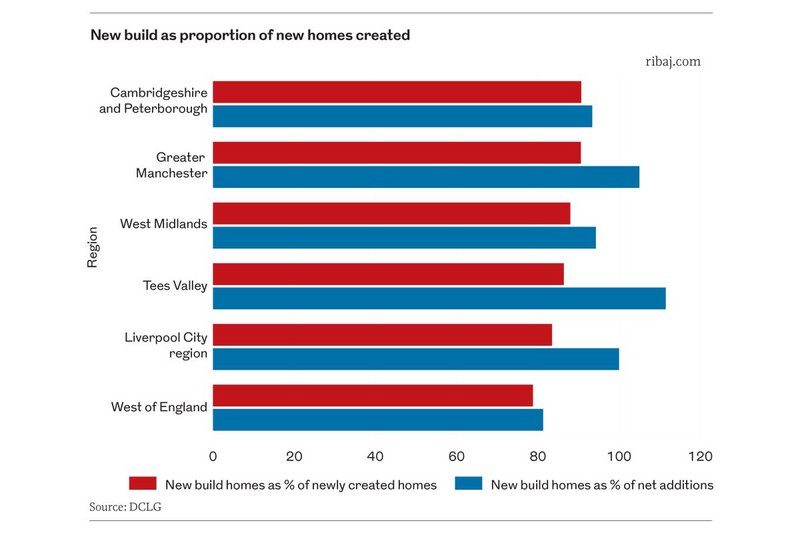 Also, improving housing is not all about building more new homes, it is about smartly and sympathetically reshaping the built environment. The housing problems facing different parts of England, indeed the UK as a whole, vary. They demand different approaches, and sometimes knocking down homes is necessary, efficient and effective.

The chart illustrates the relative importance of changes of use and conversions in expanding the dwelling stock. In the West of England new build accounts for less than 80% of new homes, whereas in the Cambridgeshire and Peterborough area new homes make up more than 90%. However, this high proportion of new homes in the area over recent years may not be representative of the longer-term pattern, as Cambridge experienced a surge in house building since 2012. 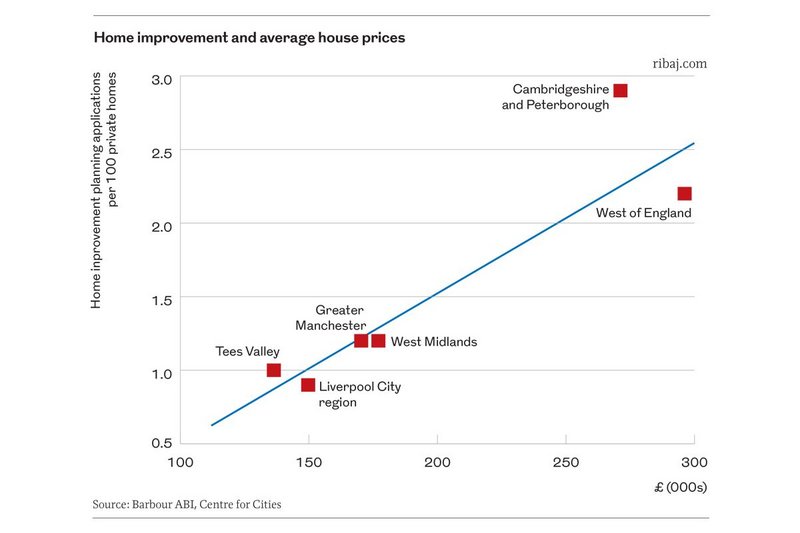 Looking to the immediate future, the prospect for house building remains strong in the mayoral regions. Certainly, the number of starts in the year to March 2017 compared with the level over the previous three years gives an indication of the prospective uplift on recent build rates (Chart 7). Naturally the connection between starts and activity is not completely direct, but on this measure Greater Manchester and Liverpool City Region look set for a sharp increase in building activity. What is also noticeable is that the Cambridge and Peterborough area has to some extent come off the boil in terms of growth. But along with the West of England activity is relatively high compared with other metro mayoral areas, with 10 starts for every 1,000 existing homes against an average of five for the other areas. So what we are seeing in northern areas is in some ways a catch up.

Longer-term, the future for housing remains less certain. The impact of Brexit is unclear. Turning back again to the population and the prospects for growth, Chart 8 shows the latest projections. Rather than forecasts, these are projected from recent trends. 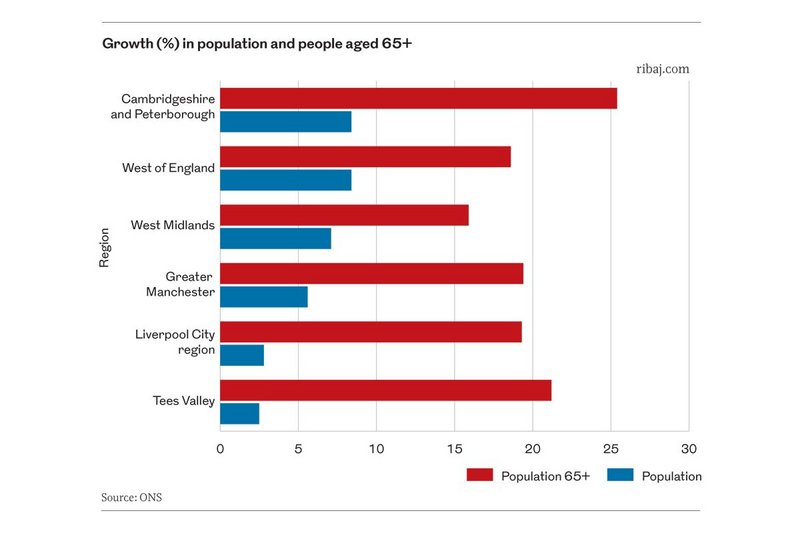 The picture they paint is of solid growth in the general population (red bars) over the coming 10 years, particularly with expansions in the populations of Cambridge and Peterborough and the West of England being well above the national average. This would suggest continued pressure for many years on the housing supply in these metro areas and the need to build or create a lot of new dwellings.

However, about half of the projected growth in the population of England over the next 10 years is expected to come from net inward international migration. Tough curbs on this will mean that population growth will be far lower than these projections suggest. Furthermore, any expansion that does occur will be more heavily weighted to the growth in the elderly. And as we see from blue bar in Chart 8, that group is set to grow far more rapidly than the population at large.

This could have profound impacts on the demand for housing and what needs to be built. In Manchester and Liverpool the vast majority of growth in the population has come from non-UK born people. It is clearly hypothetical as there are numerous factors at play, but denied of an influx of immigrants the pressure to build more homes may fall away quite markedly. Meanwhile the projected increase of about 20% in the population older than 65 year of age is pretty much baked in.

Brexit and tight controls on immigration will influence what housing is required. The effects could be profound and may spark a shift in emphasis from building more to adapting the housing stock for older occupants.

While the data above represents a rather cursory comparison of the housing challenges facing each of the six new metro mayors, it does highlight the differing level of tension within each area between more and better homes – and also the need to adapt the built environment to accommodate older people.

While all are desirable, there will inevitably be tough choices of emphasis to be made. These choices are made all the tougher given the rather confusing messages about what will be in most demand in the future.

It would appear that the challenge for architects is to find ways to maximise the quality, quantity and suitability of homes in these metro mayoral areas to balance as far as possible the housing pressures faced by each of the six communities.

It seems, given the uncertainty, that this may well mean being exceptionally fleet of foot as the precise details of the housing challenges ahead unfold.