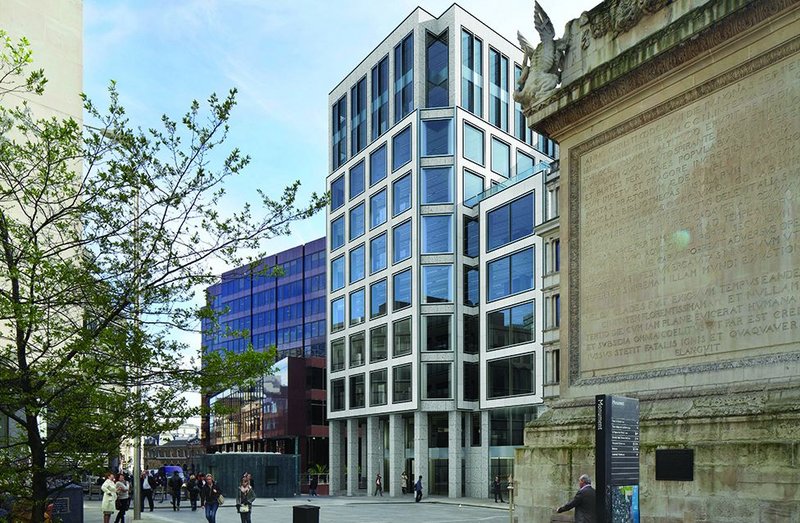 Any redevelopment in the City of London risks opening a Pandora’s Box of archaeology, none more so than at Monument Place, a location steeped in history. Close to the site of the Roman bridge over the Thames, not only was the spot likely to be rich in Roman remains, but it is also bounded by Pudding Lane, starting point of the 1666 Great Fire of London that the Monument commemorates.

This important historical context was a major influence on the unusual path to redevelopment of Centurion House and its £22m rebirth as Monument Place.

David Walker Architects was approached by developer Rockspring as part of a developer competition to come up with a refurbishment and extension of the 1980s building, which provided 61,000sq ft of offices but failed to maximise the potential of the site, suffering from inadequate energy performance, layout and cladding.

Initially, to avoid lengthy archaeological investigations at this sensitive site, they chose refurbishment rather than redevelopment. But as the design developed, it became apparent that to expand the building and improve the efficiency of its floor plates – which had three separate cores and escape stairs – would be extremely complex without achieving all that a new build could. 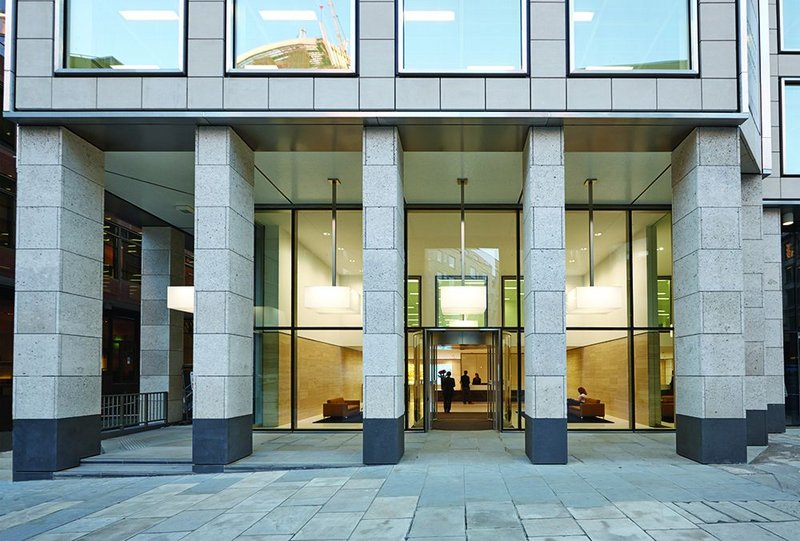 The entrance loggia is clad in shell-rich Portland stone and incorporates access to the re-routed High Walk. Credit: Timothy Soar

‘By the time we rationalised the plan into a single core (with a single stair), rearranged the bulk and massing, and replaced the cladding, there was very little of the existing structural frame left,’ says Walker.

Instead, the design team eventually proposed demolition and redevelopment to increase the accommodation while using the existing foundations. This called for a careful design of the new steel structure – provided by Severfield-Watson Structures – so as not to overload the piles. Some archaeological digging was inevitable with the relocation of the core – revealing a remarkably well preserved stretch of 2000 year old timber wharf piling and a small bath house – but retaining the foundation raft and pile caps meant that the extent of this was greatly limited. ‘New build construction was pretty much cost neutral [compared with refurbishment] but qualitatively it was much better,’ says Walker.

As a result, there was a net gain of 30% additional area despite a gross increase of only 15%. The building height was extended from 9 to 10 storeys, but the extra space was primarily due to the inclusion of a single stair rather than three as part of a fire engineered solution – thought to be the first time this had been done in a City office. By positioning the stair core in the middle of the plan, the design team could demonstrate – with the aid of evacuation models – that it did not exceed 18m evacuation distances, avoiding the need for a second core. This translated directly into savings, estimates Walker, of around £5m in terms of additional usable office space.

The key to the success of the structure, says WSP associate director Aret Garip, was locating the building’s original construction calculations and verifying the loads. They could then establish that the existing piles would support the new building, which was of lighter construction than the original but one storey higher. The new building follows the same basic footprint with a column every 3m, but with a relocated single core. 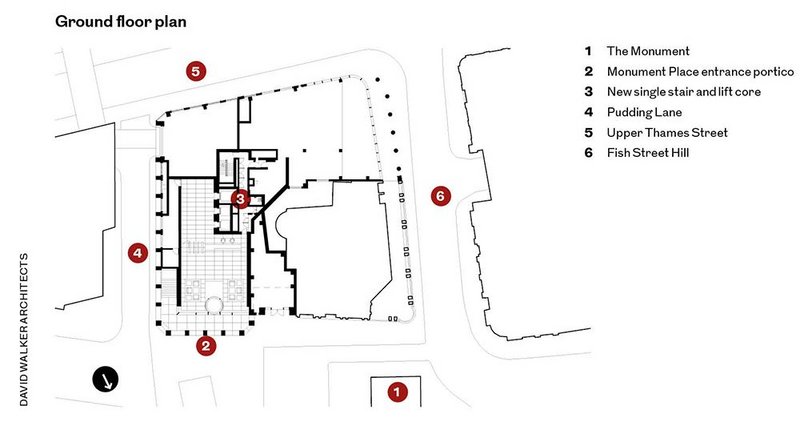 ‘We worked with the existing site constraints and turned them into a positive outcome for the project,’ says Garip. ‘The 3m column grid maintained the existing load paths and also suited DWA’s facade. We achieved stiffer floors and incorporated shallow beams around the perimeter.’

But whereas its predecessor had floor plates with 10 scattered columns, at Monument Place, WSP could limit the columns within the plan to two by using 15.5m span 525mm beams, picked up by columns every 3m along the perimeter. The only variance from the original perimeter grid pattern was along Upper Thames Street.

To achieve the extra storey within the massing suggested by the refurbishment option, the architect had to work with tight floor to floor heights of 3.5m, giving eventual floor to ceiling heights of 2.6m.

Walker repositioned the entrance from Lower Thames Street to Monument Street, designing it as a colonnaded loggia which incorporates the re-routed High Walk. This walkway previously proceeded along the Upper Thames Street facade of Centurion House, blocking out views from the office inside. Unable to remove it entirely, it was instead re-routed along the Pudding Lane facade. On Monument Street, the building is chamfered and rises to 10 storeys, but on Lower Thames Street it steps down to seven, with landscaped roof terraces at fifth and sixth floor level and continuous glazing between horizontal bands of stone.

The resulting stone facade delivers the transformation of the site that the developer was after. On the Monument Street facade David Walker was keen to combine generous 2.6m by 2.2m floor to ceiling glazing with stone cladding to give the building a solid character suitable for the City of London context rather than a more ethereal one of glass. Here, a stainless steel frame gives the windows more emphasis and sparkle – part of Walker’s interest in achieving texture and specificity within a facade without ornament.

Portland was chosen for its texture, using a total of 2.500m2 shell-rich Roach Portland on the lower levels and the clearer Basebed Portland above. The stone acts as a rain screen and is mechanically attached to continuous rails fixed to the unitised aluminium frame. It is left open-jointed to ventilate the cavity and to emphasise each stone element while being clearly legible as hung rather than load bearing. ‘It’s a City material. This building is very London,’ says Walker.

In total, the project increased net lettable area by a third to 75,000sq ft and achieved a Breeam ‘Excellent’ rating. 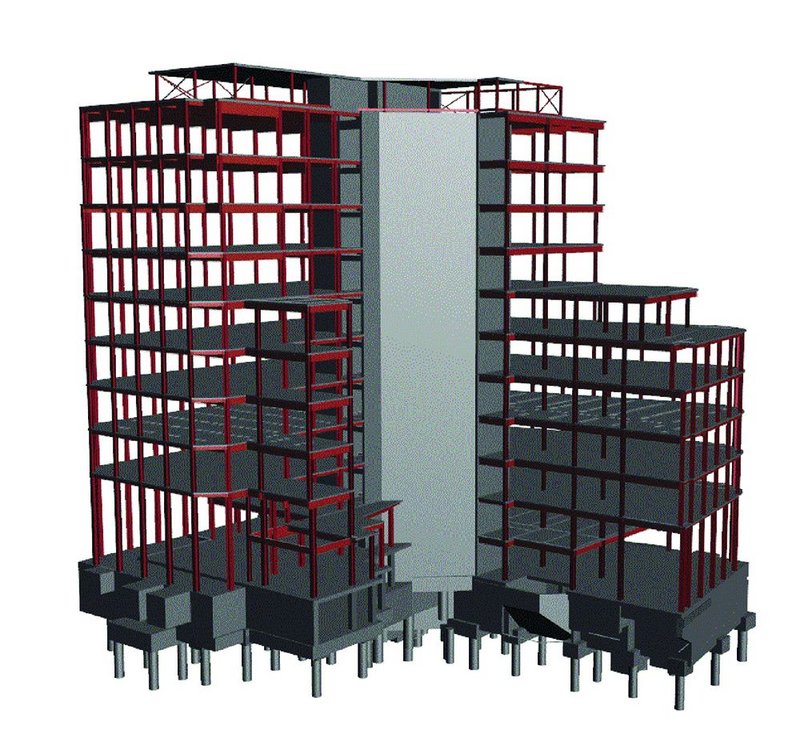 Universal Columns measuring 305mm by 305mm are arranged every 3m to align with the existing foundation pads (above) . These are linked by 250mm deep, 3m long perimeter beams.  Within the plan, floor plates are spanned by a combination of 15.5m rolled beam and fabricated steel I-sections measuring 530mm deep and 250mm wide. In response to the tight floor to floor heights, the engineers used a metal deck with a very shallow profile of 46mm compared with the more usual 50mm. 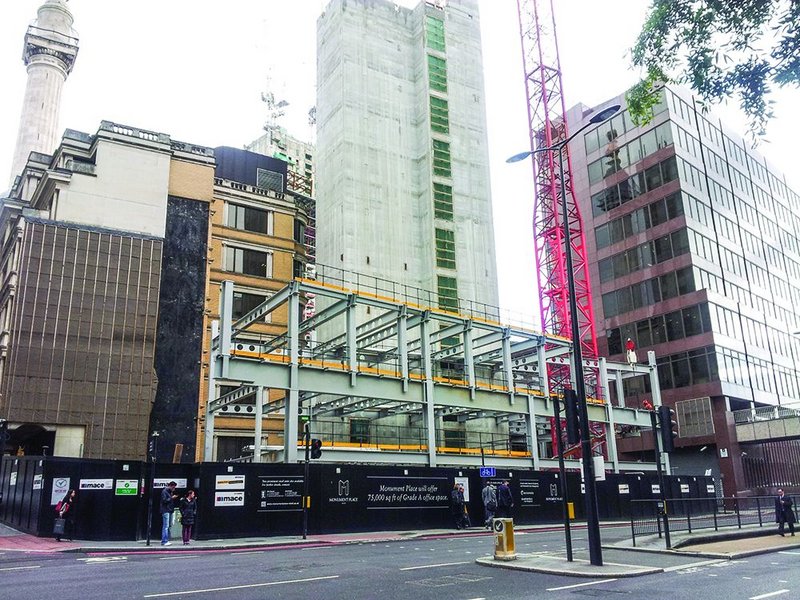 The Upper Thames Street elevation required the most structural gymnastics to reconcile the new structure with the existing foundations. Here, the original building had a zig-zag line which was regulated in the new build. To achieve this, the engineers concealed a 1035­­mm deep perimeter beam spanning 33.6m on the underside of the first floor.  Severfield-Watson Structures supplied this in three pieces due to the size of the cranes, and joined them using traditional bolted splices. This beam supports nine storeys of 3m column grid along the upper Thames Street facade and takes the load back into the existing piles.