Design codes are set to become part of all local authority development plans. David Rudlin, one of the authors of the National Model Design Code, explains their origins, gestation and expected impact on architects and we look at drawing one up in Hounslow

Let us start by imagining two people in separate rooms. The first person is tasked with designing something but cannot build it; they must pass instructions to the person in the second room whose job it is to realise the design. The twist is that the second person isn’t a willing collaborator. They might resent the imposition on their own creativity and take every opportunity to introduce their own ideas.

The person in the first room is, of course, an urban designer and the other is an architect tasked with realising buildings within a masterplan or design framework. There may be multiple architects – all working for clients who are also not interested in the work of the urban designer. It is no wonder that 90% of masterplans are never built.

The tragedy is that the urban design discipline has not recognised this situation. Frustrated that its plans and policies are too often ignored, it draws them in ever more detail and brighter colours. This is what lies behind design coding,  it marks a switch in focus from endless re-emphasis of what good looks like, to how good is achieved.

The point of a code is that it is clear and binary. It uses words like ‘must’ and ‘shall’ and includes parameters

In preparing the National Model Design Code (NMDC) we spent some time looking at design coding elsewhere in the world, where it is the norm. In France, for example, there is a digital map on the local authority website that delineates a series of zones, some for existing areas and some for areas to be developed. Click on your site and you are taken to a set of rules that tell you exactly what you can do, the floor area ratio, the height, the relationship to the plot boundary, and more. No discretion, no debate but also a quick and guaranteed permission if you follow the rules. The person in the second room has no choice but to follow the rules. Whether you think this is a good idea probably depends which room you are sitting in. 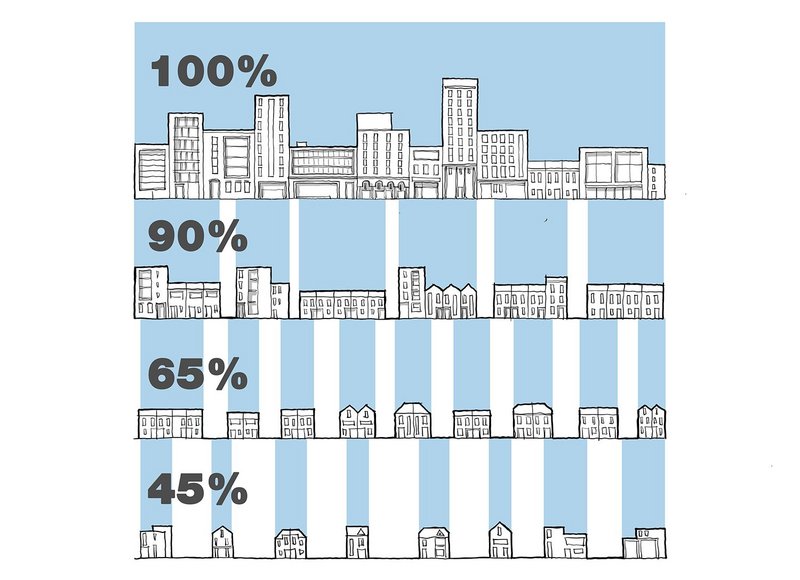 Example from the NMDC of a building line compliance diagram showing how much of the frontage should be occupied by development. Credit: NMDC

The 2020 Planning White Paper suggested something similar through its much-misunderstood provision for ‘deemed planning consent’ in ‘growth areas’. Like the French system, planning consent was only guaranteed if the rules were followed, rules that were to be set out in a code. Given the political changes since then it seems unlikely it will ever become policy. So the National Model Design Code had to be written to be implemented through our current planning system. It is the discrepancy between the precision of a code and the lack of clarity, consistency and certainty in our planning system that has generated most questions about how codes are to be implemented in the UK.

Our current planning system is discretionary, policies are worded in general terms and planning applications are negotiated between architects and their clients, and planning officers and their committees – who have a great deal of leeway. A system based on coding, in theory, removes much of the discretion; architects may feel hidebound by the provisions of a code but so are planners.

The whole point of a code is that it is clear and binary. It uses words like ‘must’ and ‘shall’ and includes figures and parameters. There is no ‘shall seeks’ or ‘where appropriates’ or ‘high quality designs’. This is understood and set out very clearly in guidance for coding being prepared by the Office for Place.

Of course, calls for ‘flexibility’ will come from those worried about the constraints codes are likely to impose. Flexibility is important, but it comes from creating space for design within loose-fit, but fixed, parameters. This is not a contradiction in terms. A code can set precise parameters within which there is a huge amount of flexibility. But if the parameters are flexible, the code becomes meaningless.

One of the implications of being specific about rules is that they need to apply to a particular geographic area. For example, a rule on building heights for an entire district would have to use vague statements about fitting in with the local context, or designs ‘being appropriate’. If you wish to say that the eaves height of buildings should not exceed 10m, then you need to be geographically specific.

Elsewhere in the world this is dealt with via zoning – a suburban area needs different rules to a city centre, so it is in a different zone. We weren’t allowed to use the word ‘zones’ in the NMDC so after a long debate we called them ‘Area Types’.

When Matthew Carmona, Bartlett professor of planning and urban design, reviewed the NMDC Pilots he was not convinced about Area Types and revealed that most of the pilots had not found them useful. Even authorities that were developing authority-wide coding tended to use more flexible guidance that covered their entire area, and so avoided creating Area Types. The resulting guidance is just that; it is not codes.

There may be codes that cover unified urban areas that have just a single Area Type, which is fine. But to reject Area Types is to reject the idea of coding. Fortunately the NMDC pathfinders are taking a different approach and most have been progressing Area Types, some using the urban morphometrics system developed by the University of Strathclyde. This automatically identifies Area Types from mapping data and can be calibrated according to how coarse or fine-grained you want to be. This has huge potential to make the concept of Area Types workable for hard pressed authorities.

It is important to understand that Area Types described in the NMDC relate to what an area should be in the future, rather than what it is now – for existing urban areas as well as new site allocations. A low-density housing area may be allocated to a higher density Area Type as a means of intensification. Proposed redevelopment may see a retail park allocated as a mixed-use Area Type. The art of coding is to derive Area Types and parameters from successful urban areas and, through discussion with local communities, apply them more widely to new development and poorer quality existing areas.

Once the Area Types have been established, rules can be written for each; the NMDC sets out a contents list of issues that can be covered and even suggests how rules might be drafted. There is nothing new here, the issues are those that urban designers have been pushing for years. The point about coding is that it shifts attention to the process by which principles are implemented.

If it works, then the person in the second room will have a set of parameters that are fixed but will not feel constraining or onerous. It won’t guarantee high quality design, but it is an important tool in improving the quality of what we build. If, that is, we can make codes work within our slightly chaotic planning system.

David Rudlin was one of the authors of the National Model Design Codes and is now Urban Design Director at BDP. He is speaking about Codes at the Office for Place event, Beauty: Who cares, Wins at the RIBA on 31 January

The National Model Design Code sets a baseline standard of quality and practice which local planning authorities are expected to take into account when developing local design codes and guides and when determining planning applications, including:
• How new development should enhance the health and wellbeing of local communities and create safe, inclusive, accessible and active environments
• How landscape, green infrastructure and biodiversity should be approached, including the importance of streets being tree-lined
• The environmental performance of place and buildings ensuring they contribute to net zero targets
• The layout of new development, including infrastructure and street pattern
• The factors to be considered when determining whether building facades are high-enough quality
• That developments should take account of local vernacular, character, heritage, architecture and materials.
To see more search online for National Model Design Code Process publication 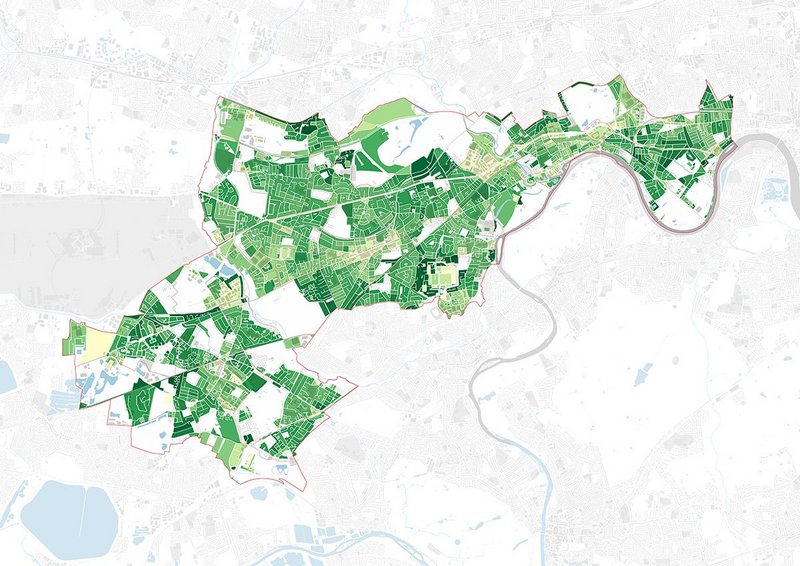 The challenges of setting out district-wide design codes:
Allies and Morrison’s experience in Hounslow

The authorities engaged in producing the first district-wide design codes each have strong ambition and a pioneering attitude. In the main, these codes are to be adopted as Supplementary Planning Documents and so must hook off existing local planning policy.  Bridging these twin objectives can be challenging, particularly when gaps in national policy mean there simply aren’t the contingency hooks for ambitious codes around aspects like climate change.

The process follows the three stages set out in the National Model Design Code, with extensive community engagement informing each stage. In Stage 1 the focus is on analysis. Much of the work is what has traditionally been undertaken in characterisation studies. Mapping in GIS is a prerequisite of this work and has transformed the interactive potential through platforms such as ESRI StoryMap.

But before diving into the mapping, it is essential to engage with the council’s development management team. This can usefully steer the priorities for analysis and streamline the focus for coding later down the line.  The community engagement during this stage is about building trust and absorbing information into the project. But time should also be spent on building capacity. By Stage 3 the content will get quite technical and so building up stakeholders’ knowledge during earlier stages helps ensure they can keep inputting meaningfully later on.

In Stage 2, we have learned it is important to find balance during conceptualisation – capturing what people want to see in their local area vs. what a code can control or influence. Much will be outside the remit of a design code, but fundamental to the design concept.  The ideal is therefore to find a home for the wider actions put forward by the community, for example, in the Local Plan review process.  One of the most common challenges though is deciding on Area Types. Achieving a comfortable alignment between Area Types, character areas and neighbourhoods is the holy grail, but it takes careful refinement to achieve a set that make sense of the local area and meet wider guidance requirements.

In stage 3, a big challenge is avoiding the output becoming a design guide covering everything.  A code should just cover the aspects specific to that area or district, but often it is the basics that need setting out first.  A solution can be a set of district-wide design principles in an overarching chapter, which is then followed by specific design codes which address local priority design issues.  By the end of the process local stakeholders must be able to clearly see the thread running between local character, current issues, and design code solutions.