Derelict for 30 years, a former Stoke pottery has been transformed into a centre for sustainable refurbishment that is all set for BREEAM Excellent status itself

In the 19th century, the skyline of Longton, like much of the industrial Midlands, was peppered by the bottle kilns of its potteries. Today, only a handful remains, and four of them sit on the site of the former Dresden (now Enson) works, a potteries factory that opened in 1847. Finally closing in 1963, and sold to Stoke-on-Trent Council in 1999, the grade II property was, until three years ago, completely derelict; until it was chosen, via local, Department for Education and EU development and Heritage Lottery funding, to be regenerated as the new Centre of Refurbishment Excellence. Opening next month, CoRE aims to be a centre of learning, providing education and training to young people to equip the next generation of tradesmen for the challenges presented by the Green Deal and the government’s carbon reduction targets. On one side of the site sits a new training centre, designed by PRP Architects’ Manchester office, but the heart of this £11.2m complex is the Enson Works with its four bottle kilns, restored and refurbished by architect Purcell and acting as a ‘demonstrator’s zone’ for new technologies and a conference facility. In line with its sustainable agendas, the refurbished building is not only naturally ventilated, using the kilns as part of a stack ventilation strategy, it’s intended to be BREEAM Excellent. 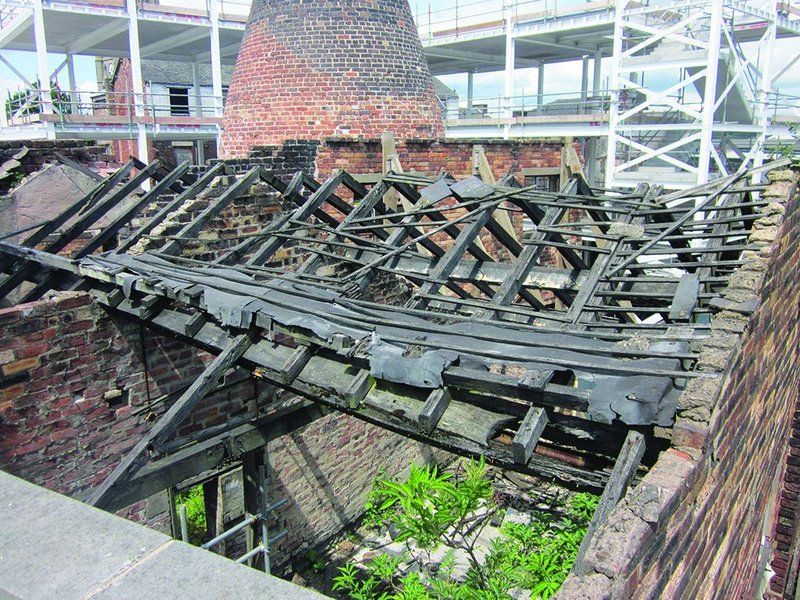 This is no small achievement. The design strategy adopted was to show how an existing, complicated masonry building constructed with no thermal insulation at all could be upgraded well beyond building regulations to minimise energy use. And it was all to be achieved from a building that had suffered decades of neglect and vandalism, whose roof had partially collapsed, exposing all the internal steel structure to the elements. Given its parlous state, the first thing that had to be done was a detailed structural survey to ascertain how much of the structure could be saved. Max Dyer of local engineer Alan Brough Associates generated a 3-D stress and loads model in CSC Building Designer, which analysed how stresses were being conducted through the building. English Heritage was keen to preserve as much of the original structure as possible, which meant a bespoke repair strategy for each and every beam. ‘It was all predicted on the state of deterioration,’ he explains. ‘All the steelwork was first shotblasted to ascertain its actual condition. On occasion a beam would simply disintegrate just being put through this process, but if it still had structural integrity we had to decide whether we welded on a new web or flange or ran a whole new beam alongside the existing one.’ Once every beam had been treated, the structure could take the load of the new in situ cast concrete floor. 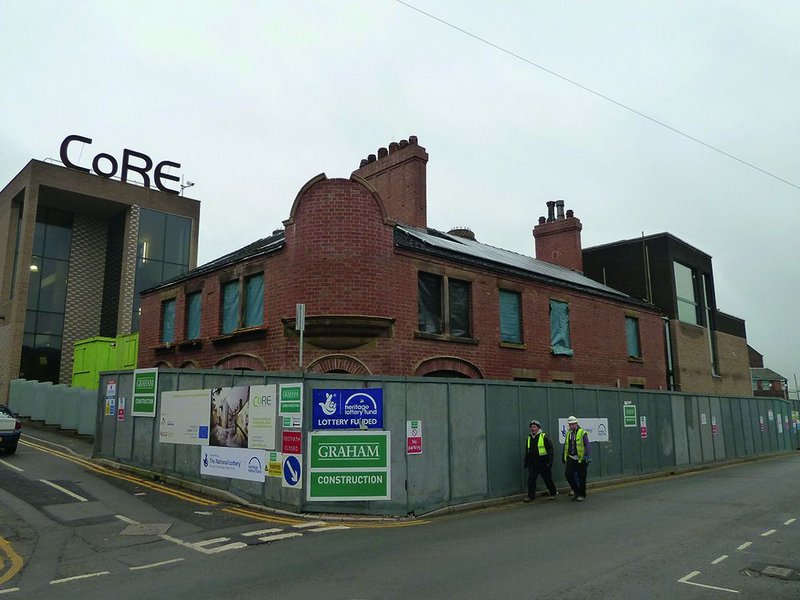 The America Hotel during refurbishment. The new PRP building on the complex can be seen to the left Credit: Purcell

The engineers were helped by the fact that the concrete beam floor was designed to take factory loading of 10-15 kN/m2, but that the refurbished building would only need loadings of around 5kN/m2. Dyer says it was an interesting case of offsetting. ‘Imposed loads might have been reduced, but we were building a thicker concrete floor to take account of the fact that we were removing walls to open the space out, so dead loads were increasing. The structural grid was also not regular, the result of piecemeal additions and changes over its history, which added to the challenge,’ he says. In a couple of areas, namely the original brick floor arching between steel beams around kilns 1 and 4, the new concrete floor above had to support the existing one. ‘We completely reconstructed the arches using salvaged bricks as replacements where necessary, but they weren’t strong enough to deal with the loads of the new concrete floor above. So we ran the new floor over them and tied the arches back up into the concrete using resin-dowelled tie bars,’ says Dyer. A hexagon of beams runs around the perimeter of the kilns, so that no floor loads are imposed on their walls. 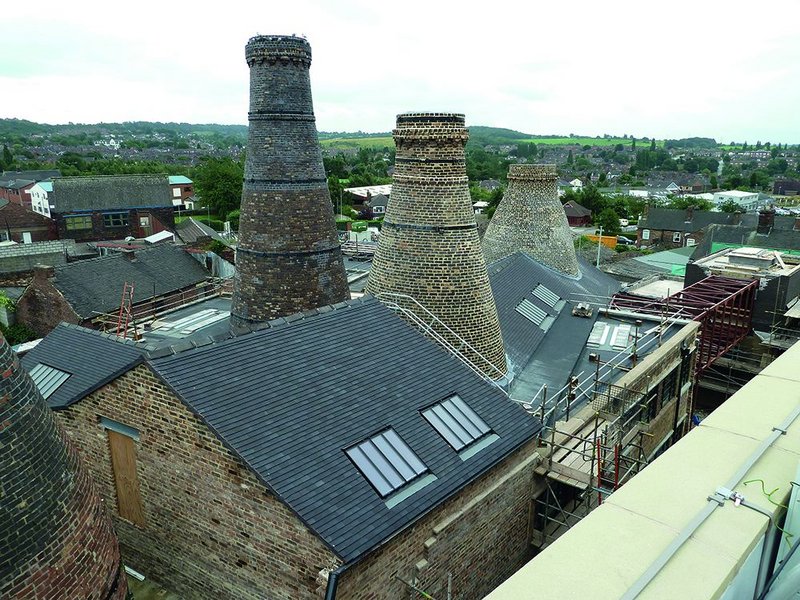 Achieving a U-value of 0.18 W/m2/K for the walls was a big ask for a single brick thickness wall with large single-glazed window openings. After the original foundations had been stabilised using a Eurotech resin-based injected grout, the external face of the brickwork wall was remediated using new bricks sourced from the same works, set in place with an identical heritage lime mortar.

Purcell senior architect Andrew Dobson explains that this needed a build out of 100mm rigid insulation on the internal brick face, which was then drylined. A major issue here was the heat loss that would occur where the concrete encased steel beams interfaced with the external envelope, creating a thermal bridge. Dobson says it required specific detailing, for if the beam gets cold, so does the first floor slab. Where the internal masonry walls, floor and roof abut the external fabric insulation had to return 1m along the soffits, which reduced the heat loss. With a similar concern for the area of the factory that has a concrete flat roof, a warm roof was created with 125mm insulation placed over the slab and Bauder waterproofing installed above it. 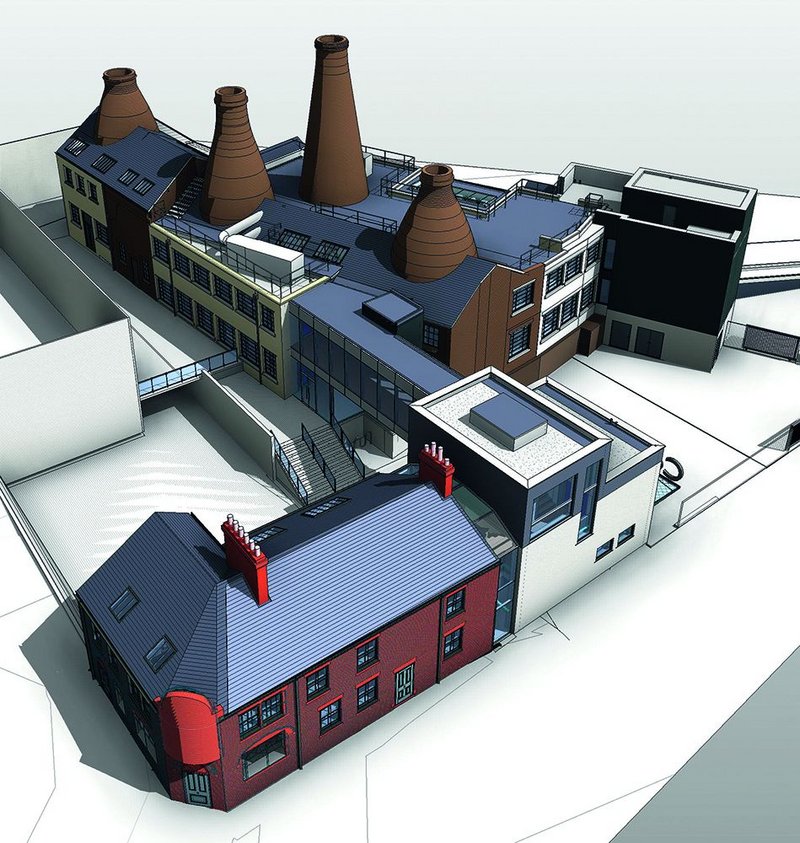 The CoRE works. The restored America Hotel sits at the bottom of the picture. Across the courtyard, in white, is the location of the new PRP building.

A number of sustainable technologies have been incorporated into the old structure, whose services strategy was designed by engineer Ramboll. The main heating system is a ground source heat pump with low temperature under floor heating – the new ground floor has also been insulated to give a U-value of 0.12W/m2/K. This is supplemented by a biomass boiler in the reception space for the CoRE complex, which is fitted with electricity generating PV panels capable of providing 8.5kW peak and solar hot water panels for domestic supply. The complex has had low-energy lighting fitted throughout.

Most ingenious however, was the use of the kilns as stack ventilation. These draw fresh air in at low level through opening windows and push exhaust air up and out of the building. Purcell got permission to install heat recovery units at the top of the kilns and, via air handling units, recycles it back through the building. The architects settled on five air changes per hour, with a positive effect on the complex’s energy use. Dobson adds that the project will be subject to post-occupancy evaluation to ensure that it performs as it was designed to. 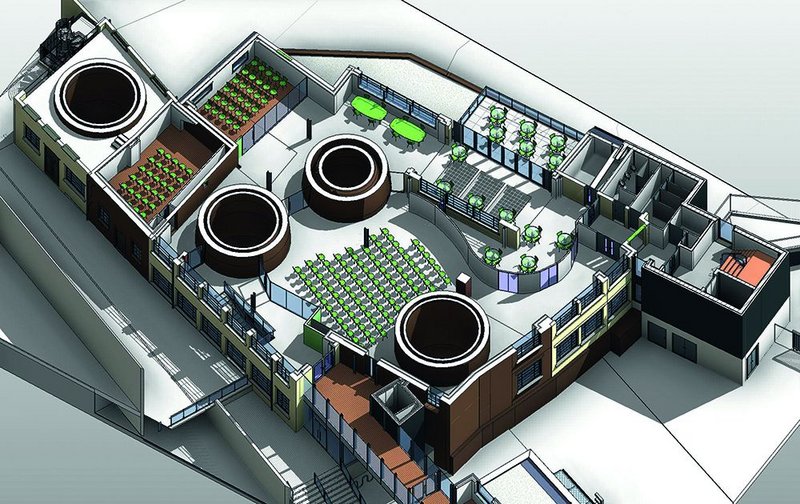 Purcell modelled the Enson works in Revit, although technically this was not a BIM project.

And that day isn’t too far away. The CoRE building completes in March and the first cohort of trainee apprentices will bring back the first life to a building that has been derelict for almost 30 years. Dobson, who’s worked on the project for over two years, is pleased with the result. So is the local community, which has seen the abandoned kilns that dominate the area finally restored to their former glory. Dobson remains demure about his role in achieving this. ‘It’s a varied, complex building whose conversion has involved an interesting set of challenges,’ he says. ‘The client wanted it to be a showcase for sustainable construction, and I think that’s what they’ve got.’

Contract structure for the Enson Works

The Enson Works was let as four contracts from November 2010 to March 2013. The first was demolition; second was the new CoRE Technology building designed by PRP. Contract 3 was the Enson Works shell and stabilisation, and Contract 4, the fit-out, new ‘hub’ building and the America Hotel rebuild – originally the pottery’s pub and now the CoRE reception area. David Dobson, project manager at Stoke on Trent City Council, explains that the construction phasing had as much to do with funding arrangements as logistics. Different contracts, he explains, allowed the works to proceed rapidly and gave continuity.

Contract 2, for the new training centre, was an NEC fixed price D&B contract, allowing the architect PRP to be novated to the contractor. Contracts 3 and 4 were NEC target cost contracts with activity schedules to deal with the unexpected events that can plague refurbishments. Under this, the contractor negotiates a lump sum price for each activity and tenders a fee as a percentage of the subcontract work to give an initial target price for the works. During the course of the contract, the sum can be adjusted to cater for effective variations as set out in the contract terms, with payment made on the basis of actual costs with an incentive mechanism for the contractor to minimise costs. Savings and over-runs are shared between the parties – which can reduce disputes.

As part of the Contract 1 demolition, the site’s America Hotel, which had been gutted in an arson attack, was dismantled brick by brick and its stone cills, features and bosses put into storage. When it came to reconstructing it, new identical bricks were sourced from the local brickworks and lime mortars used to lay them. The original America Hotel had solid one-brick thick outer walls, which have been rebuilt as they were, along with their brick and stone dressings. But the reconstructed wall now has a cavity, insulation and blockwork inner skin, to raise its thermal performance. The roof and floor were also highly insulated. Reproduction timber sash windows were fitted with slim unit double glazing to give a low U-value while maintaining the original look and detail.

The building is also retrofitted with high specification PV panels on the south roof slope, allowing them to be changed in the future without disrupting the Staffordshire Blue roof tiles underneath. Taken together, it means the America Hotel performs to BREEAM ‘Very Good’ standards, while maintaining the authentic, original nature of its external elevation.