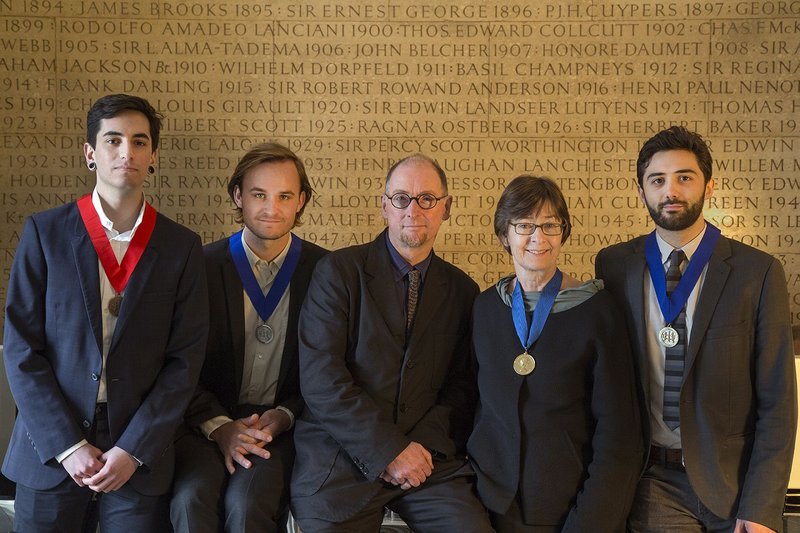 In grey and black sat the panel of critics, Royal Gold Medallists Sheila O’Donnell and John Tuomey at the centre with a modest stripe and pattern among softly structured folds. Alert and engaged through the presentation of the students who won the highest honours in the President’s Medals, they injected the event with the warmth and edge with which they imbue all their work.

First up was Jasper Ludewig from the University of Sydney with his dissertation on the history of Sydney Park, Made Ground. ‘Eloquent’ RIBA President Stephen Hodder called it, but it was also accomplished, knowing and deconstructed the process of history – writing itself by splitting the chronology into themes. He was attempting to erase objectivity in the telling and retelling of stories. The park was once rough arid frontier landscape of aboriginal sanctuary, adopted as a colonial picturesque then dug deeply for the clay of the city’s housing until the pits were filled again with the very rubble that had come out of this soil.

It was accomplished, knowing and deconstructed the process of history – writing itself by splitting the chronology into themes

The select audience was impressed, as was O’Donnell, who saw resonance with the practice’s themes from the Royal Gold Medal lecture, which spoke to the meaning of maps and the idea of place being open ended, not finalised by an intervention. But how did Ludewig come up with his themes? Not by going to the park he said, to an intake of surprise. ‘I have never been to Australia, but we are going next week so I will check the park exists,’ said Tuomey – amused, but noting he had felt through the talk that he was inhabiting a theoretical and literary, rather than physical, landscape. Could this multivalent approach work on the built form, asked David Gloster, RIBA director of education? Maybe, but Ludewig for now was content with having explored something at the heart of Australia – the expropriation of land and how it operates – and perhaps, in word form, having stabilised the ground into something meaningful.

Bronze Medallist Simon Dean’s exploration of the geology and flow around Mount Vesuvius was similarly connected deeply to the ground, although with his atmospheric photos of climbing up the 1944 lava flow there was no doubt he had visited the site. The original question of whether the tourist shacks could be cleared from the volcano’s approach developed into new ideas of a bath house dug deep into this volcanic limestone, tufa. To him it seemed the inevitable project for the site on the very geological layers of which suggest the heat, water and hollows of a bath house. And into the future he imagined more layers of lava burying and future excavations as the place was overlaid and overlaid.

‘It felt like a dream,’ said Tuomey, dreamily. ‘But perhaps the dream overwhelms the project.’ O’Donnell felt the need to be able to zoom in to the materiality of the project, the concrete Dean had mentioned, and to zoom out to its precise location. But it was agreed that as an aggregate of site conditions, it was what O’Donnell and Tuomey work towards. ‘We often get finished highly rendered projects submitted for the President’s Medals,’ added Gloster, ‘But this takes you into another world.’

Alexandra Stara, chair of the dissertation judges and associate professor at Kingston University, took the opportunity of Dean’s Kingston background to launch a special plea. ‘If smaller, less generously funded schools are to continue to rub shoulders with richer, more august ones, the same care and investment that tutors expend on their students and students on their work needs to come from the universities to those schools.'

The other world of a Winnie the Pooh theme park in Slough received a more mixed reception from the panel of critics. Bartlett Silver Medallist Nick Elias walked them through the development of his investigation into happiness, industry, industry towns and the fictional sites within us for his project PoohTown. The plan of Christopher Robin’s head was laid onto Slough. Nodal points for each of the characters, Pooh, Rabbit and so on each had forms and activities that could engender the sorts of activities they represent in the books. It was beautifully and extensively drawn, complete with posters to entice happiness seekers out of London to this new industry. But reflecting on his work, Elias wondered if the result was too corporate.

O’Donnell saw the irony but couldn’t bring herself to appreciate it. ‘I am bogged down by sincerity and seriousness,’ she admitted. ‘It set its own definitions, you said things and they became true… it was clever and detailed, but didn’t achieve reality for me,’ she said. It was said softly but somehow damningly, tapping into Elias’ own misgivings about his presentation. Stara resuscitated the meaning and depths of Pooh Town. ‘It is such a tantalising premise that happiness can come from the space and environment. The next stage is to think less literally and prescriptively… Take those themes as a life project but make them more common.’