Only connect, they say, as if it were that simple

If there’s a pervading theme to the permissions this week, the word might have to be ‘connection’. Often used in design and access reports, it is a panacea to planners who might otherwise suspect that an architect’s design is not paying due respect to its surroundings. This demand can create a kind of facadism; it’s happening in London’s Spitalfields as we speak, where retained facades are retrofitted with new programmes and structures behind them. Interesting, that. Contextual it may be, but it doesn’t say a lot for contemporary responses. Many of the projects here are wrangling with that same issue; I’m sure much time was spent balancing the morals of such approaches against the need to achieve a successful outcome. To connect, some go out on a limb to adopt pragmatic, contemporary responses. But sometimes, as with the Chester proposal below, it’s best to dive right into contextualism and see what happens… 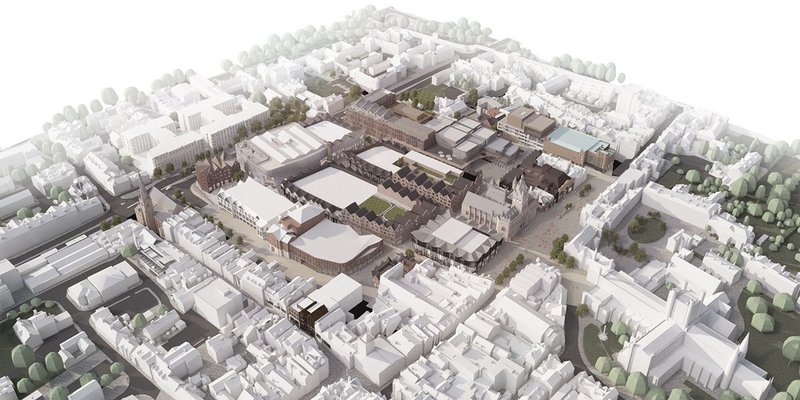 This outline proposal by architect ACME, to redevelop a whole central quarter of the city of Chester, has to be one of the most interesting permissions we’ve seen. The £300 million, 50,000m2 scheme in the shadow of the cathedral will dramatically reshape a fragmented city centre with new shopping streets, parades and plazas, all connecting back to the existing urban fabric.

ACME has spent four years working with the client, local businesses and the public to come up with a masterplan whose scope cannot be communicated effectively in this short description. It will include a new cinema, market hall and hotel as well as opening up a new route to the market square via strange unifying canopy made up of a number of tall arches.

We’ve yet to get a handle on the architectural language of this development as it seems to be constantly changing, creating a form of variegated post-modernism, taking local vernacular and warping into a new, contemporary reading. If each were on their own, one might well be critical of this approach; but seen together this hotchpotch of po-mo meets ornamentalism has a sense of studied authenticity that looks almost believable. Compelling. 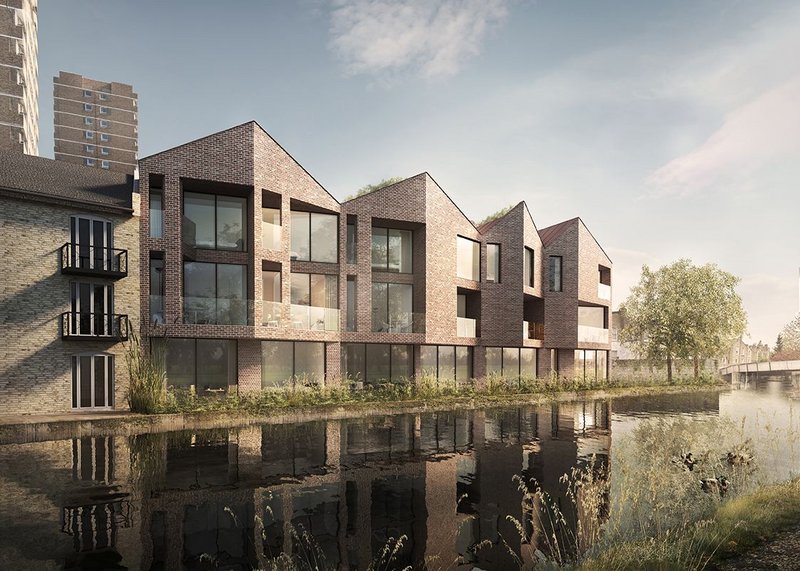 Fresh from its recent success in the Highgate conservation area, practice pH+ has notched up another one – this time in London’s Victoria Park conservation area, with this new development of three houses, three maisonettes and two apartments facing out over the Hertford Union Canal.

As with Highgate, it’s all about the gable ends, these ones responding to the Georgian homes the development fronts onto and the scale of the adjacent apartment blocks running along the canal. Here there is a particular quirk inasmuch as the folded gables on the canal side create spaces for external balconies. At ground, there will be dense planting which, the architect says, will encourage biodiversity.

London stock bricks are mixed with reddish purple ones to pick up on local hues and the firm has adopted different bonding techniques to create a kind of rusticated base for the development, adding both scale and texture.

It resembles a housing scheme in Acton for which the practice won permission earlier this year. This earlier one runs beside a railway instead of a canal, and realises the value of an unused sliver of site along the tracks. 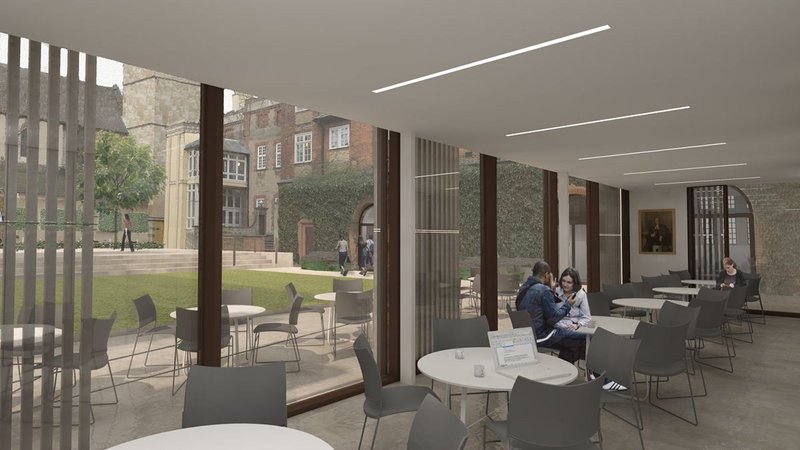 St Peter’s is one of the younger Oxford colleges, founded in 1929 and only achieving full status in 1961. Its chapel effectively divides it into two main quads, public to the north and private to the south. Here, this is divided again by a level change forming Hannington and Chavasse Quads. Design Engine’s new college building addresses Chavasse Quad but sits within a remodelled landscape.

The new four-storey building aims to make the college a better place to study, teach and live by providing six study bedrooms, seminar rooms and ground floor study and events spaces. It’s also part of a bigger remodelling of the quads levels, which currently have ‘tortuous’ ramps, to make the whole area more accessible; seating will be built into one side to allow the quad to be better enjoyed.

Stepped back at the fourth floor, the building has a screen of square section ceramic rods to the quad acting as a veil to the functions behind. This is finished in a natural texture to echo the stone tracery of other college buildings. This sits in front of bronze coloured metal cladding of the actual building to match the colour of their existing brick too. 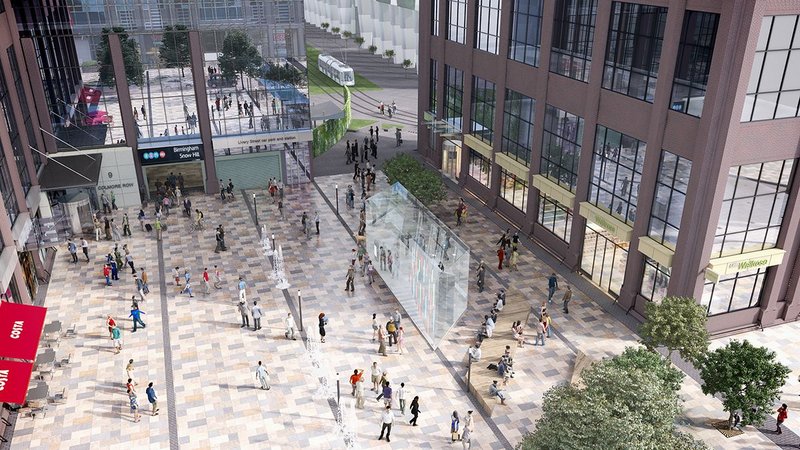 This project, in the heart of Birmingham’s central business district, half a kilometre south of the Bullring and a short walk from New Street station, is adjacent to the new Midland Metro tram extension running through Colmore Row at Colmore Circus.

Architect K4’s structural glass pavilion invites pedestrians down to the new basement commercial area beneath their feet by creating a theatrical showpiece within the public realm. This aligns both with the desire lines of people walking in the square and the railway tracks running parallel to the site. The parallelogram forms part of the sightline between the developments One and Two Snow Hill.

A lift or a glass staircase will convey people to the lower level. Like the pavilion, both the staircase and its balustrade will be made from structural glass, designed in conjunction with the engineer. At the bottom, stonework will match that of the square above; a minimalist palette that unifies the two spaces.

This 326-bed Premier Inn in the heart of Smithfield is part of a refurbishment and new build west of the main, listed Smithfield Market complex. It involves the retention and conversion of a 1970s red-brick building with a new eight-storey extension to the south fronting Cock Lane.

John Robertson Architects says the design of the Cock Lane facade was driven by the surrounding Victorian proportions, with clearly defined upper, middle and lower storeys. The firm is using red and light beige bricks to differentiate varying plot widths and darker grey brick within recesses separating the plots. Decorative brick patterns will be used too.

The design is built around a central glass-roofed atrium linking the two blocks and acting as central circulation. Communal facilities will be at ground and upper basement levels with any roof plant relocated to the lower basement to allow for rooftop planting and a blue roof as part of the water attenuation strategy. 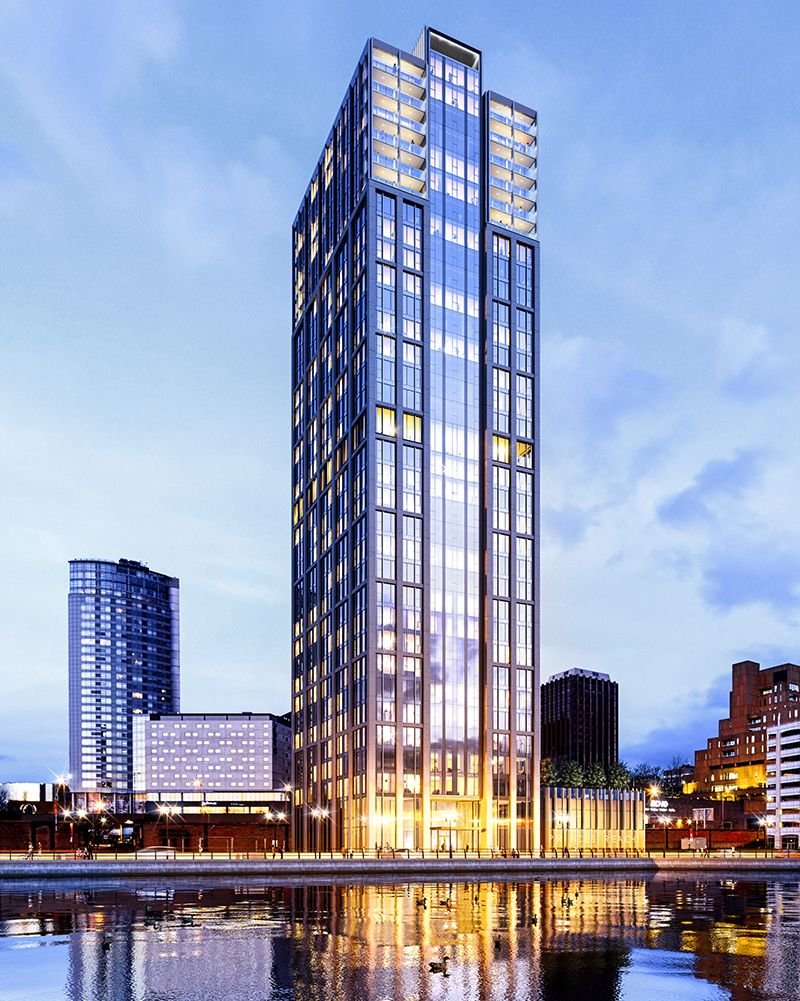 Liverpool Waters is a 60ha, 30-year vision for regeneration of the city’s northern docks area. This new £82M 34-storey residential development at Princes Dock will be a ’premium purpose-built rental development’ and Liverpool’s tallest residential landmark.

Along with 304 high-spec one-, two- and three-bed apartments, there will be 1,390m2 of communal amenity space with a 17th floor residents’ lounge, gym, roof terrace, garden, fitness studio, an ‘indoor/outdoor’ cinema and 24-hour concierge. Apparently it is ‘underlining Mayor Joe Anderson’s commitment to supporting investment in housing’, and a mere ‘stone’s throw’ from the famous Three Graces. It’s all great – for those who can afford it.

Moda Living has been acquiring sites for private rented sector developers since 2014 and was responsible for the recent Angel Gardens acquisition in Manchester and a site in Broad St Birmingham. Its partner in the joint venture, Apache Capital, invests capital from the Middle East in the UK property market, operating mainly in social infrastructure, private rented sector and commercial investment, selling to institutional investors on completion.