Two housing-led schemes involve residents with design, a destroyed street grid returns, Victorian warehouses are to fill with youthful activity and the National Holocaust Memorial is closer to construction

The long-running saga for RIBA Gold Medal winner David Adjaye’s design for the National Holocaust Memorial is one step closer to final construction but there may still be developments before the diggers move into Victoria Tower Gardens in Westminster.

Housing minister Chris Pincher has approved the plans after the government controversially called them in three hours before they looked set to be rejected by Westminster City Council.

Disagreements over the project have been widely covered by the national and architectural press, with the main concerns centring on: adverse effects on a site of such heritage, involving relocation of the Buxton Memorial; that more of London’s green space would in effect be privatised; that locating the memorial so close to parliament serves to overplay or romanticise the wartime government’s response; and suggestions, including from Holocaust survivors and educators, that better funded Holocaust education for younger generations would help tackle rising antisemitism more than a visitor experience.

Opponents have vowed to fight on but, with this recent consent from Chris Pincher, the Adjaye-led project will see 23 bronze-clad walls (representing each country in which Jewish communities were destroyed) slice into a subtle raising of the gardens from their newly laid out north end, forming narrow passages between through which visitors will descend into the subterranean learning spaces.

Asa Bruno, director of Ron Arad Architects who had led on the project, sadly died just over a week before the plans were finally approved.

The growth within Ebbsfleet Valley has been fairly slow over recent decades. Even after the High Speed 1 railway station opened to whisk people towards London or Europe, the pace in growth was slow.

But, since the 2014 announcement that a garden city to create homes, communities and parcels of development would be created at what was once a site of cement works and other industrial buildings, alongside the establishment of the Ebbsfleet Development Corporation to oversee the works, pace has been rapidly increasing.

The latest component is this BPTW scheme of 67 homes, of which 10 are apartments, with 25% categorised as affordable. With the tagline ‘Built by Westerhill Homes. Designed by you’, the scheme is being marketed as a ‘custom-build community’. It offers buyers customers choices in porch arrangements, internal layouts, external finishes and detailing patterns, and number of car parking spaces, allowing a degree of the bespoke into the streetscape, a gridded array with three cul-de-sacs. Buyers can select from three ground-floor layouts for each house size, and then from three types of external materials – red brick, yellow brick or weatherboard – and then brickwork patterns.

This may work well for the developer, with an approach like that of a personal shopper guiding a buyer through their choice, and may help add a feeling of patterned diversity across a new-build estate where many can seem repetitive or lack personality. However, with a fairly narrow set of external options compared to, for example, more well-known Dutch custom-build housing projects, the sense of how diverse, unique and personal the properties are remains to be seen.

A cluster of grade II listed maltings, granaries and warehouses dating from the 1820s along Grimsby’s River Freshney are to become a hub for youth activities, support, guidance, sports and recreation under plans by John Puttick Associates. An independent charity, Grimsby Youth Zone is part of the OnSide Network, which already runs 14 similar spaces across the country, each charging 50p a visit to 8-19 year olds or up to 25p for those with additional needs.

On this site, the heritage architecture will be converted for uses including music, film and multimedia production, performing arts, cooking, a climbing wall, fitness and martial arts. A new, multi-purpose sports hall will connect to the largest of the brick warehouses, with an outdoor multi-use, floodlit ‘kick-pitch’ and skate park – sure to be popular after the sport’s introduction into the Olympics.

In its advice, Historic England said it 'very much welcomes this exciting initiative to repair and reuse' the former industrial buildings, which will retain their historic relationship to the River Freshney through a pontoon connected to an internal boathouse.

With Covid and Brexit in the air, alongside a culture of commerce that has shifted from the physical to the digital, shopping centres up and down the country are looking a shadow of their former selves. The Agora Centre in Wolverton, in the northeast of Milton Keynes, is such a centre. Opened in 1979, replacing rows of terraced housing, it was designed to offer a new centre to the town as wider Milton Keynes was developed and prospered, and has been in private ownership since 1988. However, in recent decades, it has become jaded and deteriorated, with a lack of footfall.

As the houses before it, it is now also set to be demolished and replaced with a mixed-use scheme incorporating 115 homes, of which 29 will form the Still Green Cohousing community for over-50s. The scheme, masterplanned and landscaped by URBED, reinstates the housing grid lost to the 1979 development, including Radcliffe Street, which is to become low-speed shared space. Love Wolverton has already won the Festival of Place and Design Council award for the country’s best future place.

Transparency of the planning process and navigating the chaos of planning portals is a huge barrier to public engagement by communities affected by possible developments, large and small. From the outset, TOWN helped local people understand their proposition. Using a very clear website – www.lovewolverton.co.uk – they explained how to access the portals in the council’s website and, given that portals can be confusing for many people, also made the key documents, including the design and access statement, available to download from the site.

Anybody who has to navigate the various planning portals, extract information that is often broken up, badly named and unexplained to the non-expert (say, someone who writes a twice monthly column for an architecture journal) will know how bad the process to when it comes to informing, educating and engaging the public in built environment changes . TOWN has here set a high benchmark for engagement and transparency from which other developers could learn. 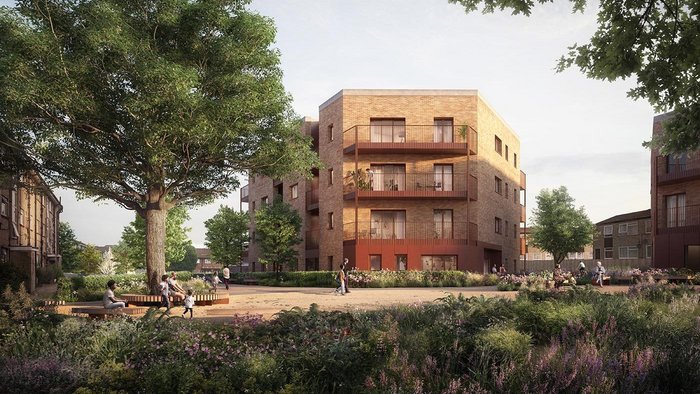