Projects are still moving, and recent planning approvals feature a facility to develop and manufacture Covid-19 vaccines. There’s also a range of a residential schemes including a later-living development that involves converting Cullinan’s listed Cemex House, and Camden has approved the reconfiguration and revival of London’s historic Irish Centre

MANOX is a mixed use neighbourhood of 410 homes on a brownfield site in Miles Platting, just outside central Manchester along the Rochdale Canal on a site that is half a former blue dye factory and half open grassland owned by the city council.

The design for a ‘family-orientated neighbourhood’ features different family homes and apartment buildings and is a mix of shared ownership, build to rent, affordable rent and rent to buy, all set within the larger, mixed-use masterplan. It includes nearly 750m2 of commercial space for local businesses, a community hub and a canalside café.

The architect aims to ‘create a legible and clear street hierarchy with active frontages overlooking external, social spaces, which all knit into the existing street pattern of the wider neighbourhood, and re-establish the historic grain,’ though it doesn’t clarify how this allies with the former industrial nature of half the site. However, it is using nearby Victorian terraced housing as the model, ‘with rear yards and alleyways…reinterpreted as shared outdoor spaces.’

The scheme is designed to be low carbon and energy efficient, with sustainably- sourced materials and low-waste strategies.

Set in a village near Cirencester within the Cotswold Area of Outstanding Natural Beauty, local firm Coombes : Everitt has secured planning permission for a new, low-energy, home to be built in the grounds of a rural manor house.

The single storey residential dwelling design has a green flat roof with Cotswold stone exterior walls, and an overhanging roof to ensure no light pollution or glare from the ceiling-to-floor glazing and to reduce visual impact within the wider landscape.

The triple-glazed property will be very well insulated and energy-efficient, with the client considering solar panels and ground-sourced heat pumps to make the most of renewable energy sources.

The City of London Corporation has been given the green light to build 110 new social housing one- to four-bed homes in the borough of Lewisham on land at the leafy Sydenham Hill Estate. The proposal includes a community room, estate office and new children’s play area and will be 100% social rent. This will help to alleviate the borough’s housing shortage by allocating 50% of the homes to Lewisham residents.

The site lies within the Sydenham Hill Conservation Area, a sensitivity reflected by reportedly more than 200 objections being submitted to the plans, including from the Forest Hill Society, the Sydenham Society, and Dulwich and West Norwood MP Helen Hayes.

Permission for the £40 million development was secured despite their concerns that the four, six and seven storey heights of the proposal would ’unacceptably impact’ the conservation area and listed buildings.

The City of London Corporation is a social landlord with 2,746 homes within 12 housing estates across The City and six other London boroughs. It is developing a range of projects to deliver 3,700 much needed extra homes in the capital, across a range of tenures.

Camden Council’s Planning Committee has unanimously approved plans to develop the historic premises of the London Irish Centre. The Centre, which opened its doors in 1955 as the Irish Priests’ Committee, has been the Irish heart of London for over 65 years. The new space will enable the Irish Centre to grow and diversify its award-winning community services and cultural programmes.

The site, on the corner of Camden Square, comprises a main villa, part of the 19th century square, with piecemeal additions of the 1960s Kennedy Hall and the McNamara Hall, added in the 1980s.

The permission gives a chance to radically reconfigure the site by demolishing both and inserting a new intervention on the Murray Mews corner of the site, while reconfiguring the existing elements of the building to make them more accessible. Accessed from this side will be a community café and kitchen, a large multi-function venue, a wellbeing centre, a therapy garden and a shop.

The £18 million proposal, carried out with Rolfe Judd Planning, was supported by high-profile patrons of the centre Ed Sheeran and Dermot O’Leary, and unanimously approved by the planning committee – though local press aired the view of at least one neighbour disgruntled by the prospect of its new, enabled social life.

This conversion of Ted Cullinan’s grade II* listed Cemex House includes restoration of the existing 18th, 19th and 20th century buildings and the addition of a new one. Together, these will house 79 apartments and a variety of facilities within a new ‘later living’ village.

The existing buildings will be turned into 1 and 2-bed apartments and the recreational facilities from the Cullinan scheme will be restored to create a community heart. Front of house areas will be reinstated and swimming pool and spa, squash courts, restaurants and dining areas refurbished. New facilities will include a residents’ lounge and library, staff accommodation, guest suites and two winter gardens along with a boating lake and allotment gardens.

The new element is conceived as a 21st century campus addition, carefully integrated with the landscape to reduce visual impact on the green belt. The 23 apartments are arranged in two clusters with front doors opening onto one of three public mews courtyards. Green roofs offer communal uses while picture garden courtyards to the south give views to the landscaped grounds.

The scheme design has been endorsed both by Cullinan Studio and the 20th Century Society. 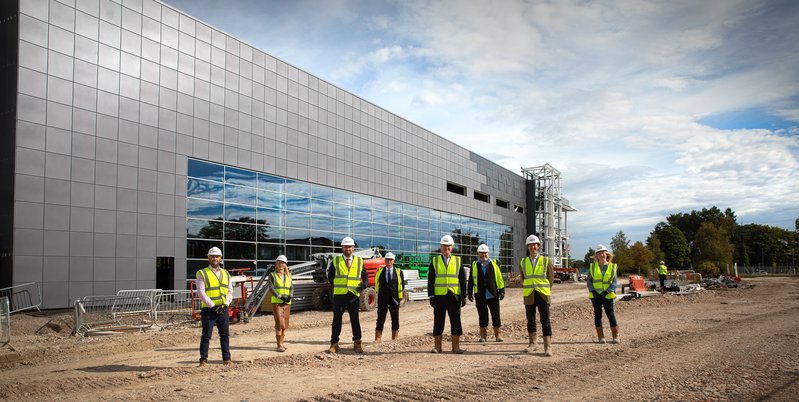 Interesting times. Planning has just been approved for the UK’s Vaccines Manufacturing and Innovation Centre (VMIC) on the noted Harwell Science campus – a huge facility that started construction months ago and is intended to fully operational by the summer of 2021.

VMIC, a not for profit organisation based at Harwell Campus, is intended to provide England’s first strategic vaccine development and manufacturing capability. In an unusual move, the district council allowed the facility’s construction to begin while fast-track processing the planning application, due to the critical nature of the facility and its role in producing vaccines for Covid-19 and beyond.

The UK government pledged £66 million to the development of the new centre, which was facilitated by planning consultant Carter Jonas and main contractor Glencar Construction. Landscape firm Exterior Architecture was brought in to mitigate the effects of the facility on the rural landscape.

Engineer WHP, which has already completed RIBA Plan of Work 2 covering conceptual design, is working with Derell Consultants and using 3D BIM modelling to finalise the cleanroom architecture, M&E components and critical utilities systems for what should be a national Centre of Excellence.

Out of their depth on planning