The Covid-19 pandemic seems to have progressed rather than impeded planning applications. Perhaps that is because site activity was stopped in its tracks as a result of the lockdown, allowing architects to progress applications in the interim. Speaking of tracks, the most notable permission below is the Interchange Station in Solihull, designed by Arup Architects, further consolidating the HS2 proposition. Tracks also form part of Stanton Williams’ consent for the Museum of London, in conjunction with Julian Harrap and Asif Khan, which puts Tube lines on show to visitors. And in an interesting planning juxtaposition, a new green belt home is approved, in part because it did not exceed the existing bungalow’s sacrosanct ridge line. This can be compared to MHA’s mixed-use development in the capital, where nine storeys over the existing general building line doesn’t constitute more than ‘localised impact’ – what a difference a 'view' makes!

Replacing a single storey place of worship that was struggling with visitor numbers and no longer fit for purpose, the £1.5m Purley mosque, with its distinctive minaret, will be a new landmark for the commuter belt town.

The six-storey building will not only contain a generous prayer hall at ground level but will provide teaching and wellbeing facilities above – not least a ‘community penthouse’ overlooking the town centre. Set on the fourth floor are three sheltered accommodation flats that will help cross-subsidise the facility.

Islamic architecture and the distinctive Edwardian and interwar townscape of Purley provide the design inspiration. Decorative brick and tiled elevations using local Surrey and Sussex bricks integrate the building into its town centre setting, near the Victorian railway station. The minaret doubles as a spiral stair accessing all levels and behind it, a colonnaded front elevation fuses western classical architecture with Mughal design, helping create a modern British mosque.

This four-bedroom dwelling replaces a 1960s bungalow in an Area of Outstanding Natural Beauty close to the village of Abinger Hammer in the Surrey Hills.

The architects successfully argued that the size of the new house was not achieved at the expense of increased footprint. A 245m2 home has been realised on a footprint of 199m2, a reduction of 30m2 on the original bungalow’s area. The extra space was achieved by digging out ground below the bungalow to create a level of accommodation without any increase in the overall bulk and massing when seen against the landscape.

At upper level is the master bedroom, open plan kitchen and dining and snug, while at lower ground three more bedrooms are hunkered into the landscape.

This project forms part of the Small Sites Programme being delivered by Homes for Lambeth, a not for profit company owned by Lambeth Council and tasked with delivering more affordable homes for families in the borough. This delivers 14 high quality new homes on Hydethorpe Road, west of Balham town centre.

The red brick design was influenced by the immediate context of a seven storey 1960s housing block, a listed Victorian villa and two storey terraced housing. As a result, the building staggers from two storeys at the south end up to four and five storeys at the north west side, facing the block.

Of the 14 homes, four are 50m2 one-bed units, seven are two-bed, 70m2 units and three are 102m2, three-bed units. Six of the homes will be for intermediate or social rent. With generous 2.5m ceiling heights, all but one of the flats are dual aspect, two units are wheelchair accessible and all have external amenity as recessed balconies or roof terraces. There is on-site storage for 22 cycles.

A former light industrial estate just to the north of Elthorne Park in Hanwell, this 0.77ha site has received planning permission for Elthorne Works, over 2,000m2 of mixed-use commercial within a three-storey podium with 205 flats spread over nine storeys above it. Situated on Trumpers Way, the low PTAL rating of the site was perhaps mitigated by Hanwell station, 1.3km away, being on the future Elizabeth Line. The proposal was subject to a screening opinion, given that the Schedule 2 development overran the 150-dwelling limit under EIA Regulations.

Forming part of the 7m high podium at lower level are eight townhouses running from ground to second floors, with the 205 flats occupying the nine floors of accommodation above. The housing provision is predominantly for market sale but will be supplemented with a proportion of affordable housing for both sale and rent.

The PR states: ‘Elthorne Works has been designed to reflect the industrial heritage of the site whilst embracing the adjacent green space of the neighbouring park…the modern industrial units on the ground floor will preserve and enhance local employment opportunities, whilst also providing a flexible commercial space which can be easily adapted to suit individual occupier requirements.’

The Smithfield site was the subject of a number of contentious former planning applications, so this is the most significant milestone for the Museum of London project since its announcement in 2015, confirming it as one of the largest cultural projects in Europe.

Completing the Culture Mile, the new museum will engage with its surroundings and communities and bring vibrancy to a historic yet deteriorating part of the City, says the PR. 'The Market Buildings, once a place for trading goods, will become places for trading ideas; a democratic and inclusive arena for public life, performance, installation and debate, capturing the many voices of 21st century London.'

Smithfield is a conservation area, and the Poultry Market is grade II listed. The design approach will pay attention to the balance between the red brick and stone of the General Market and Annexe buildings and the modern concrete, glass and copper aesthetic of the Poultry Market. The architects’ vision melds these buildings with contemporary interventions, such as the entrance portals to West Poultry Avenue and the canopy between the Red House and Fish Market.

This landmark station, a key element of the HS2 proposition, was approved last month. The approval included surrounding landscaping and public realm and a 2.3km long ‘people mover’ that will connect the interchange with the existing Network Rail station, the NEC and Birmingham airport.

The station comprises two, 415m long island platforms and six tracks, all connecting back to a western concourse station formed of a timber glulam portal frame structure, set at 9m centres. The roof is conceived as a series of interlocking diamond-shaped leaves, which will allow north light into the concourse. To the north west will be a public plaza that connects to the people mover and there will be an eastern entrance that spans over the tracks to the station via a Cor-Ten bridge.

It is intended to be the first railway station globally to achieve the BREEAM ‘Outstanding’ certification at design stage, putting it in the top 1% of UK buildings for eco-friendly credentials. Renewable technologies including natural ventilation, daylight, harvested rainwater and solar energy will help to cut carbon. It will be, it claims, net zero carbon in operation.

The design is backed by local stakeholders, notably the Urban Growth Company, ‘supporting the development of 70,000 new jobs, 5,000 new homes and 650,000m2 of commercial space across the UK Central Hub, generating £6.2bn GVA per year and bringing 1.3m people to within a 45-minute public transport commute of the station.’ 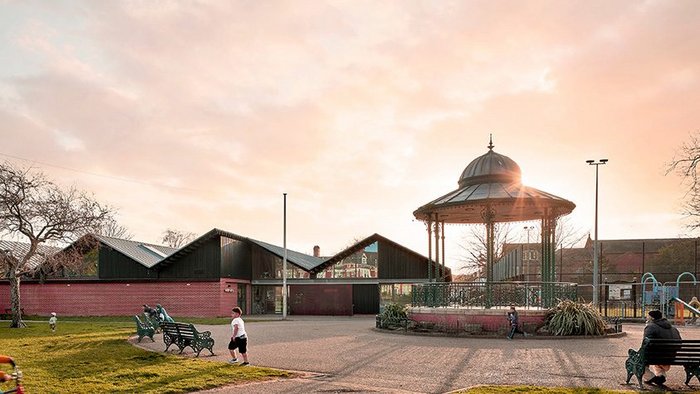