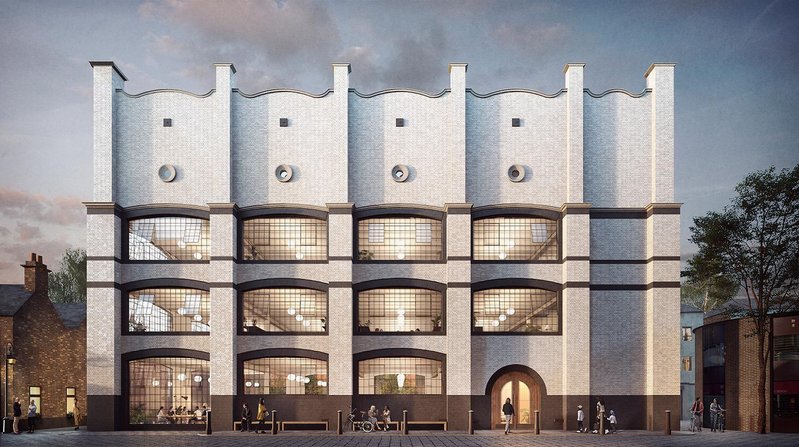 A Chiswick wallpaper factory designed by renowned Arts and Crafts architect Charles Voysey is to be renovated and restored into modern offices. Completed in 1902, the glazed white brick building, with an arch motif across all openings and parapets, has been grade II listed since 1973, and operating as offices since a 1928 fire in a neighbouring building. When the current tenants moved in October an opportunity came up to refurbish the building without disrupting any occupation.

Working with Turley as heritage advisor, dMFK plans to clean and repoint the white brick facade, with any bricks deemed beyond repair to be replaced by specialist brickwork contractor. Non-original windows will be replaced with steel-framed panes as intended by Voysey, and generally glass will be replaced across windows using Fineo slimline glazing, with secondary glazing thought to appear too bulky and create double reflections.

Internally, Voysey’s open plan layout will be restored, alongside the introduction of modernis office features including bike storage, new toilets, additional fire escape stair, a new lift to enable full Disability Discrimination Act access, a VRF heating and cooling system, and enlarged reception/co-working space as an entrance. For future workers in the refreshed office space, one main contemporary architectural addition takes place on the roof with a reworking of existing third and fourth floor terraces to provide a new green roof and ‘Spanish Steps’ seating area. 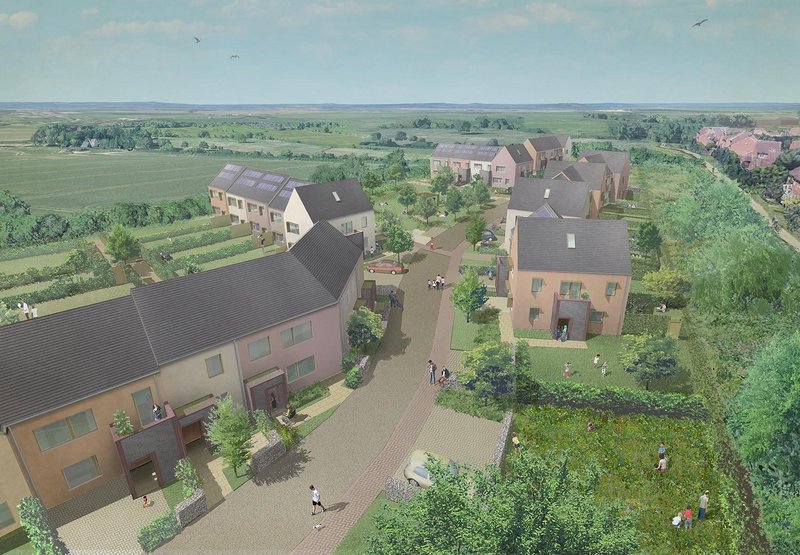 In 2018, a group of residents from Thame in Oxfordshire founded a Community Land Trust, having seen the price of land and property rise beyond the means of most local people, and beyond the hope of ‘genuinely affordable’ housing. With support from Homes England, the group has worked with Transition by Design over the last 18 months towards this successful planning application for 31 homes over a three-acre rural site. The architect has supported the trust in securing grants from the Community Housing Fund and Community Led Homes Start-up Fund, and guided the community through the process of imagining a scheme to now being in a position to construct a secure future in the area.

In all, 16 of the properties will be for affordable rent with 15 for discount market sale. They will draw on local architectural vernaculars towards a typology of short terraces configured around green clusters and courtyards with a mix of on and off-plot parking. A generous central green and folly keeps the properties’ focus inwards, while at the west edge of the site is a natural play area adjoining an attenuation pond, with a wildflower meadow to the east.

Architecturally, the houses vary between 1 and 3 beds, with details that modernise Oxfordshire salt-glazed bricks, lime renders and header coursing to articulate facades. Each unit has a stacked-course brick porch, offering a punctuating motif to the street, with lime render of hues inspired by the surrounding rural palette. Planting across the scheme priorities biodiversity, native species and ‘an abundance of fruits, flowers, seeds and nuts’, which it is hoped will also entice cyclists and walkers off the adjacent Phoenix Trail to stop for a break. 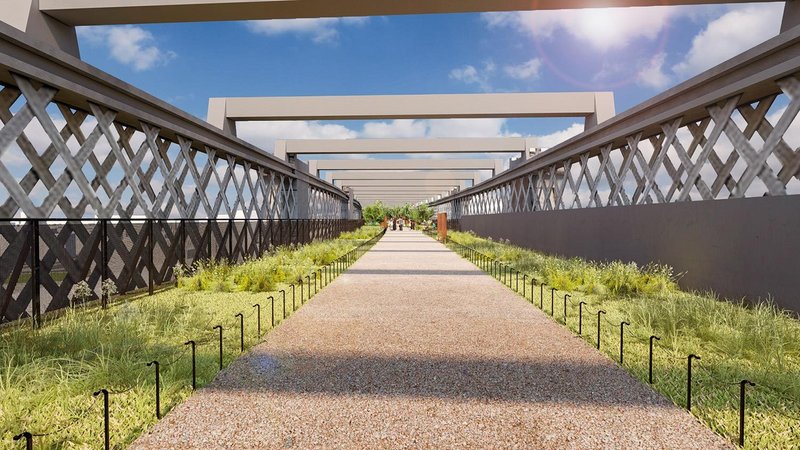 A temporary planning application and listed building consent has been granted to the National Trust and Twelve Architects for Manchester’s response to New York’s Highline park. Half the length of the Castlefield Viaduct, running over the Bridgewater Canal and through an area of the city centre undergoing rapid redevelopment, will become a temporary urban park from June 2022 and July 2023, enabling the trust to test ideas and draw feedback from the visiting public with a view to informing longer-term plans for the whole of the structure.

The length of park will be broken into three sections: entrance zone, then a length of the viaduct in its existing state, then a secret garden, before an event space terminates the visitor journey. Access to the viaduct is from an existing carpark with stairs and lift, with the entrance zone offering a welcome kiosk and explanation from visitor hosts. A green gateway invites visitors deeper onto the viaduct. The secret garden features Corten modular planters, and it’s envisaged local artists and community groups will have the opportunity to plant or create works within the flora.

The event space comprises a timber building with a facing vegetated canopy which offers an open plan space for learning or presentations. It’s picture frame windows open the view towards the remaining half of the viaduct which it is hoped will be similarly reimagined in the future. All capital improvements are designed to be demountable and reusable when the testing period ends.

Matt Cartwright, founder of Twelve Architects, said of the scheme: ‘This is an important project on many levels – bringing a derelict structure back into use, introducing urban greening to the city centre and helping to genuinely “level up” access to outdoor space.’ 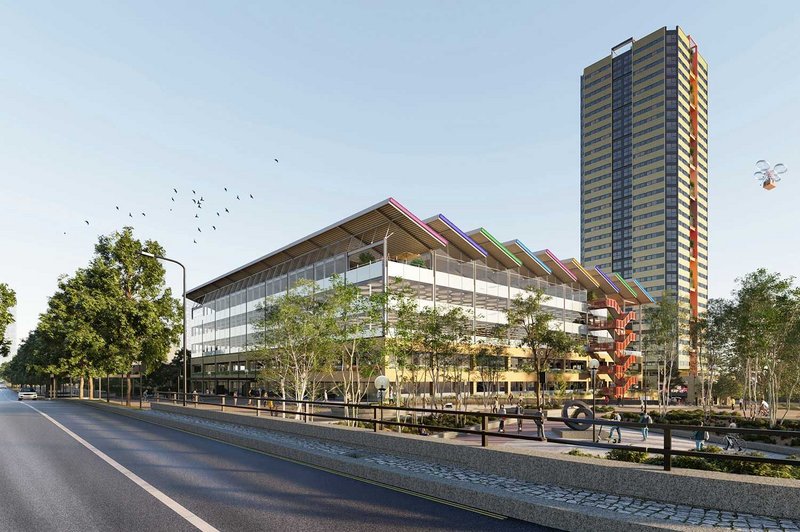 At just over 100m tall, if Rogers Stirk Harbour and Partners’ newly approved Milton Keynes tower was a tree, it would be the second tallest species on earth – emphasising the rapid shift in how the town has changed over the last 50 years from its initial policy that ‘no building [should] be taller than the tallest tree’.

Called MK Gateway, the project sits on the centre of the horizontal axis of the urban grid in a square currently occupied by Saxon Court. This low-level brick office block, designed by Ivan Pickles and Robert De Grey, has an internal three-storey atrium, giving visitors a Tardis-like as a surprise after the sedate two-storey entrance. The building, atrium included, is to be retained, but will now support a further three stories on top, with a new open stair wrapping the inside of the extended atrium. Renamed The Shed, the extra three floors are formed of steel-framed glass, with a dramatic oversized saw-tooth roofline in typically bright RSHP colours, which the architect claims will ‘reclaim the dramatic intent of the original proposal’, referring to Saxon Court’s original plan for the atrium to be supported by vast Miesian metal trusses.

But it is not The Shed, which will retain an office use, that claims the drama in the scheme. The adjoining 33-storey residential tower, The Village, will become a landmark not just in the town but for kilometres beyond. Running up the southwest elevation are a series of triple height sky gardens, directly accessible from the lift lobbies at each level and offering ‘outdoor rooms’ for seating, dining, exercise or growing, with a staircase that runs vertically through all the openings offering access between the gardens and a secondary means of escape.

These garden spaces are key to the village approach of the tower, offering external spaces for the 288 units, averaging about 58m2 each. A further private amenity space runs around the grassed roof of the plinth level at the foot of the tower, while a third block, the South Row Buildings, completes the scheme with commercial uses suited to SMEs with flexible requirements. The Green public space sits between the three buildings.