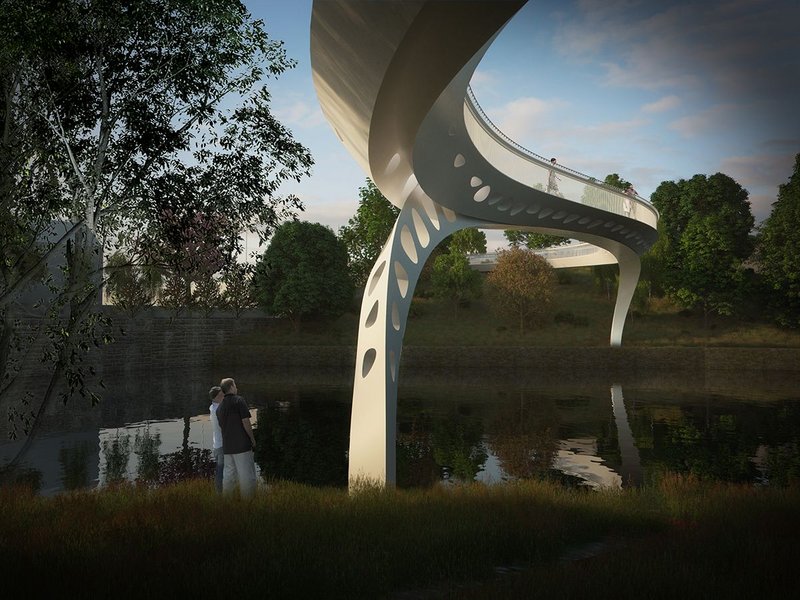 Salford Meadows Bridge competition scheme about to go in for planning. Tonkin Liu

Shell Lace Structure is a tailored single-surface structural technique pioneered in 2009 by Tonkin Liu architects and developed over the last six years with Arup engineers. The technique has integrated a growing body of research, generating a variety of structural types applicable for bridges, large-span halls, and shelters, yielding a vast array of super-thin cost effective structures.

All shell lace structures are ultra-light and deploy three formal principles: curvature, corrugation and distortion – principles demonstrated by mollusc shells. They are nature’s way of generating maximum strength from minimum resources. By learning from nature, shell lace structure reasserts the direct relationship between form and structure. Form for structure’s, not form’s, sake.

Architectural research is an intellectual act underpinned by intuitive and systematic physical investigations. Simple structural principles intuited by the hands are often lost in digitally-generated, complex models. Shell lace structure reconnects the hands to the computer. Using plasticine, hands, paper and scissors, we studied structural stiffness in local folds and varying curvatures, and invented the method of tailoring a curved structure with flat sheets. This unexpected discovery occurred when making study models for a seaside pavilion design competition in 2009. Since then, every shell lace structure project has begun with hand-kneaded plasticine models.

Shell lace structure would not have been possible 10 years ago. Advances in digital tools have enabled us to learn more from nature’s constructional patterns and mimic their principles. Tonkin Liu’s interest in this dates back to its teaching at the AA School of Architecture in 2001-5, and has advanced in leaps and bounds, expanding the territory of biomimicry. Shell lace structure combines advanced digital tools with tailoring techniques. Patterns of flat sheets are digitally generated, cut, and reassembled to form stiff 3D structures.

Shell lace structure was also born out of the flurry of design competitions we entered during the 2008 recession. We persisted with the research, vigorously testing it through 15 design competitions and advancing it in various scales: materiality, cost, and technical realities. In more ways than one, shell lace structure  is a product of our time.

Occupying the threshold between art, science and industry, shell lace structure  has been enriched by collaborators. In the past two years we have held an MArch studio at the University of Westminster, widening the remit with fresh insights from architects, scientists, engineers, and students.

Our competition-winning proposal for Rain Bow Gate demonstrates its structural virtuosity with 3mm thick stainless steel plates spanning 7m, a project that won an RIBA Award and the RIBA North West Small Project of the Year Award in 2013. When the sun shines, 133 glass prism inserts in the perforations cast rainbow-coloured light. In early 2014 we won the Salford Meadows Bridge competition, which has now been completed up to the Approval In Principle stage and will shortly be submitted for planning. We have also developed other new shell lace structure  hybrid types through international artwork competitions. The ‘Sugar Vane’ for Guadeloupe is an interlocking lattice tower of perforated surfaces, while ‘Hull Shadow Gate’ is a perforated, twin shell, stressed-skin structure internally braced. Sometimes, as the sun shines through the aligned perforations, poetry by one of Hull’s residents is projected onto the city’s pavement. Hull Shadow Gate is due to be completed for the forthcoming 2017 Hull City of Culture.

Winning the RIBA Research Trust Grant in 2013 gave our research a new lease of life. Although financially challenging, launching the publication and exhibition at the RIBA helped establish our authorship of this invention. Furthermore, the tactile, large, lightweight models enabled visitors to understand shell lace structure’s inherent physical and structural logic. A raft of invitations followed for Tonkin Liu to lecture and exhibit both internationally and in forums in the UK. Responding to Tonkin Liu’s talk at the RIBA, a bio-medical research group invited the team to develop a respiratory stent for collapsed airways, using the same principles. We have now applied for a grant to fund the design for generating several 3D-printed prototypes to be tested in surgery in the lab.

In between fee-earning projects, our small practice invested in shell lace structure  research, amounting to 20% of our overall output. This year, with an increase in new work, we have positioned the research in an academic sphere, with director Mike Tonkin undertaking a PhD at the University of Bath under the tutelage of Dr Chris Williams. Dr Williams shares with us a specific interest in shell structures and the relationship between geometry and structural strength.

Research must break new ground to have integrity and be useful. We want to discover possibilities for the future. The journey requires single-minded pursuit and the ability to embrace failures to inform the process. Through this work, Tonkin Liu has become more engaged with structures, using the technological understanding and tools of our time. We hope to continue to explore and advance all shell lace structure ’s environmental, structural and technical potential.

Anna Liu is a partner at Tonkin Liu