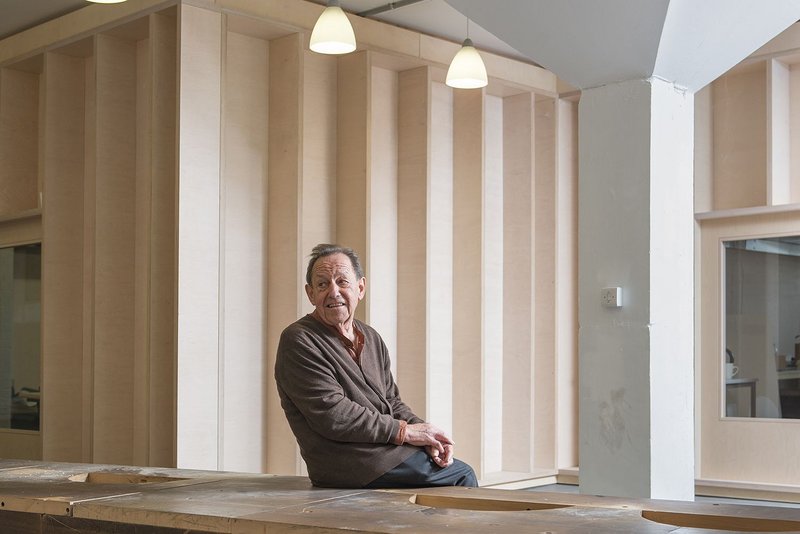 Do you consider yourself an educator or academic?

I am an architect. I teach from that position. I like to build. I was very lucky to be given the task of designing the school here. The new spaces of the school at the CASS school of architecture at London Metropolitan University are like a little city within the building.  We created a street and the front of each studio has a family of windows onto it. The front of each studio is like a little facade.

Who has influenced you?

Philip Cristou and I understand each other. We have worked together teaching and on design projects in as the Architecture Research Unit since 1985 when we did the Half Moon theatre. And then there is Alvaro Siza, who can sketch so beautifully, and Frei Otto who I worked with on the Munich Olympics; Hans Scharoun, Peter Märkli and many others.

Where do students learn most?

In their units, teaching with 20 per unit. We encourage them to work in the studio – it is their house. They learn by sketching, making and looking carefully at good examples of architecture.

We just took our unit to Évora in Portugal to see Alvaro Siza’s Malaguiera courtyard houses with their beautiful streets that are adjusted to the topography. The old Roman city had aqueducts: Siza was fascinated by them and their silhouette against the sky, so above the mat of houses he put his services, justifying them as more accessible their tectonic form and their ability to give urban structure and orientation to the new quarter. That is very special.

How do you help them?

We teach young people to love architecture, and to offer a sense of generosity of spirit in their designs, with artfulness, so they can begin to get excited about their work. When students are asked to design it is very daunting at the beginning. We think how to give them a head start by asking them to make studies of good architectural precedents. We say design a good house … and we show them houses that do more than just say here is a bedroom, here is a living room. Function comes later, first is the idea of space. You design a good room with good proportions and then test the space with a specific programme, and adjust the design if necessary.

What is architecture about for you?

I think architecture is cultural pursuit, not a science. For example, architects work with themes of the artificial and the natural, or the ornate and the simple (you have to be selective and use good material but very little of it). I like students to have a good awareness of scale. If you are able to work at many scales you have a good chance of making inspiring architecture. For example, furniture can be architecture. We speak about architecture as city.

Have certain themes carried through your career?

In betweenness is an abiding concern... It is all about space, space, space. We are not interested in objects. Like the painter Giorgio Morandi put out vases and tea caddies every day like a little city and he was painting the spaces between vases. It was never about oneness, but about twoness at least. It means you can use money not just for the private and the concerns of a client, but also for publicness and the way the building has a public quality (even inside the house).  The building should be a gift to the city. That is what we are here for as architects.

Florian Beigel is professor of architecture at the Sir John Cass Faculty of Art, Architecture and Design, London Metropolitan University, where he has taught in the diploma architecture course since the early 1990s. He is director of the Architecture Research Unit (ARU), a design research studio at the CASS, and has projects in South Korea as well as the CASS itself at Aldgate East.

The RIBA presents the Annie Spink Award biennially in recognition of an outstanding contribution to architectural education.