Amid chaotic political leadership and wildly conflicting assertions of where Brexit leaves us, the industry is wise to wait and see

Construction on the verge of recession. That was one reading of the latest Markit/CIPS indicator. Its primary construction index dropped from 51.2 (modest growth) in May below the 50.0 no-charge mark to 46.0 in June – a seven-year low and indicating a fairly sharp decline in activity.

The biggest falls were in commercial and residential work. This matched the narrative forming after the UK voted to leave the EU, with house-builder shares plunging and property funds suspended.

The report accompanying the data makes plain that most of the results were in before the vote was counted (more than 80%), but many respondents had linked the downturn in activity to uncertainty ahead of the EU referendum.

Worrying as this indicator is, it would be wrong to use it as a simple guide to assess the impact on construction activity of either the result or the run up to the vote. 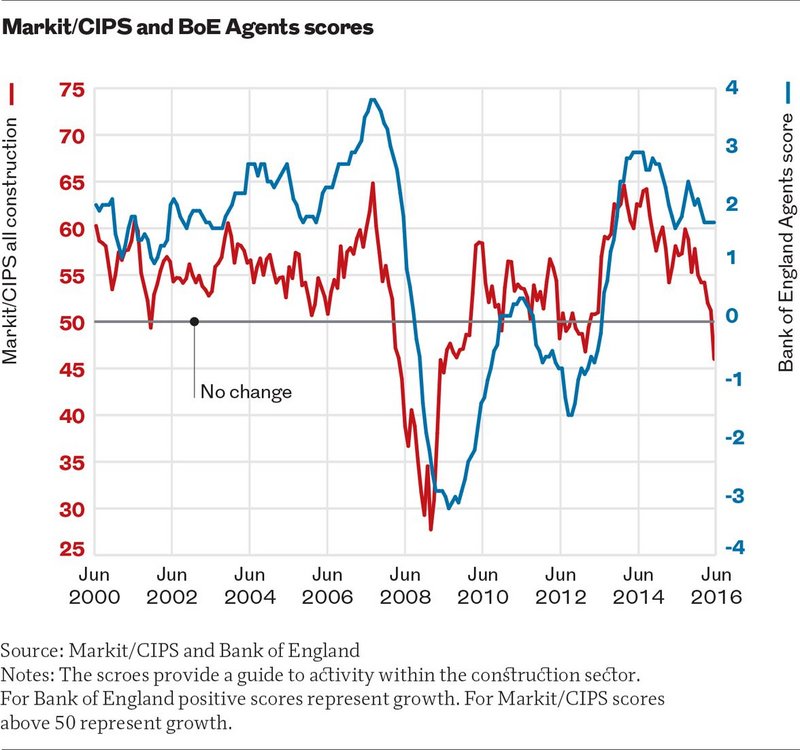 First, it tells us little about the impact on construction of uncertainty generated by the leave result. Secondly, the way the index is calculated means that widespread small changes in one direction carry more weight than large changes experienced by a few firms. Ahead of the vote it was reasonable to expect a small slowdown for most firms in, for example, contracts. This highly co-ordinated effect would, as the vote approached, have a larger effect on the Markit/CIPS index.

Bad, but how bad?

So, while the index indicates the effect was widespread and negative, we don’t know how negative. It certainly doesn’t mean activity slowed abruptly. Here, comparing with the index from the seemingly less-dramatic recent scores from the Bank of England Agents (although its June figures are yet to be released) is helpful.

We need more data before we can begin to gauge the Brexit impact. And, even then, it is likely that while pointers will emerge thick and fast over the coming days and months, how individuals interpret them (good or bad) will rest heavily on which way they voted and why. Everyone expects disruption. So as the data flows in expect rapid shifts and wide differences of opinion over the implications.

The post-referendum plunge in share prices was dramatic. Shocks have this effect, as markets seek to discover and settle at a new price. The drop of around a third in shares of major house builders sent out a particularly worrying signal. It clearly indicates market unease with the sector, but again we can place too much emphasis on the scale of the fall.

We need more data before we can begin to gauge the Brexit impact. And, even then, how individuals interpret them will rest heavily on which way they voted and why. Everyone expects disruption. So as the data flows in expect rapid shifts and wide differences of opinion over the implications

A fall in share prices does not automatically translate linearly into falls in work. Furthermore, ahead of the referendum, there were suggestions within markets that house builders may have been overpriced.

Despite mutterings over softening in the London market, the mood music around the housing sector had been very positive. Production and prices were rising. Constraints on skills and materials were fading. The major house builders were considered to have secured land at prudent values and rising real earnings were expected to underpin buyer confidence.

This view bred a consensus that the market was stable and secure. This it seems rested on political and economic consistency and the referendum result clearly scattered many of the jigsaw pieces that formed a picture of solid but sustainable growth.

It’s too early for a sensible consensus to emerge on what is likely to happen. But at this stage the notion of a price collapse across the market seems distant from many experts’ thoughts. It’s accepted that London may take a dip, but this already looked possible ahead of the vote.

The initial impact of Brexit seems most likely to be felt in falling transactions with potential buyers and sellers nervous, fewer looking to buy matched by fewer people wishing to put homes on the market. Worryingly for the wider construction fraternity, but clearly subject to huge caveats, the informed view seems to point to residential property transactions possibly falling as low as those seen in 2010 and 2011. That would suggest a drop of about 30%.

With uncertainty buzzing, it seems reasonable to assume major players will be cautious about opening new sites and look to secure sales rates on sites already in production. Smaller firms may also shelve plans. House builders can be expected to remain coy initially, we will most likely gain stronger insight into the scale of the impact as responses emerge from the product manufacturers supplying house builders.

The impact on architects however seems clear – a hiatus in early stage work.

Perhaps more unsettling to those in the wider construction sector are signals emerging from the commercial sector. Property funds have been suspended, initially by Standard Life, M&G and Aviva, with uncertainty created by a lack of clarity in what lies ahead for the UK believed to be spooking investors.

This may all blow over and prove of modest concern – unless it spreads, creating greater need for funds to sell properties and downward pressure on prices. That could freeze work in the pipeline.

Property may be a long-term investment, but the long-term future of the UK commercial property sector is extremely unclear. This leads to paralysis in the short term. How many firms will up sticks and leave the UK as a result of the vote is hard to gauge. How effective post-Brexit policy will be in attracting new occupants is unknowable. We don’t even know how long it will be before the mist of uncertainty clears.

Sadly, the nation’s reputation for stability, which for many outside the UK is one of its big selling points, has been damaged. Irrespective of one’s views on the long-term benefits of being in or out of the EU, the chaotic management surrounding the exit process will inevitably undermine credibility in UK political and economic planning. How this will be reflected in overseas investors’ appetite long-term is yet another unknown.

For all that potential and yet unrealised pain, one of the curiosities of systems is the varying and sometimes unpredictable amounts of positive and negative feedback produced as they move to re-establish stability and reach a new normal. Certainly it’s the case that residential and commercial property sectors can suffer from quite brutal positive feedback, with prices falls encouraging further falls in prices.

Positives can emerge from helpful negative feedback – the impact of the fall in the value of the pound for instance. It may raise inflation on imported goods and drive up build costs, but in turn it can act as a stabiliser making the UK more attractive to foreign currency

On the other hand, positives can emerge from helpful negative feedback – the impact of the fall in the value of the pound for instance. It may raise inflation on imported goods and drive up build costs, but in turn it can act as a stabiliser making the UK more attractive to foreign currency. Depending on their view, investors may choose to invest while they see cheap prices. The point is that signals have to be assessed in the longer term and in the light of both their positive and negative effects.

Interestingly too, for all the surreal political happenings of recent days, there may be early signs of a broader consensus forming around the need to boost investment in the nation’s infrastructure. The Conservative leadership for years dismissed calls for substantially more direct public investment in the built environment. It was, then, quite a reversal to witness Stephen Crabb – supported by business secretary Sajid Javid in his, albeit failed, bid to be leader – put the case for spending £100 billion on infrastructure including schools and social housing.

Here’s a quick example of the confusing messages we should expect in coming months.

In reality, these are all straws in the wind. There’s little in the way of data or precedents to call on to provide clear guidance on where the nation is heading, let alone what it all means for investment in the built environment.

Most architects know they tend to be among the first to feel the chill wind of recession in construction. So it’s understandable that across the profession plenty will be keeping a very close eye on the economic and political weather, looking for sunshine between black clouds scudding across the sky.

Find out more at the RIBA’s Brexit Briefing