Rethink 2025 entrants could submit proposals on any subject, but proposals largely fell into four groups: the street, workplace & education, villages & suburbia, and living 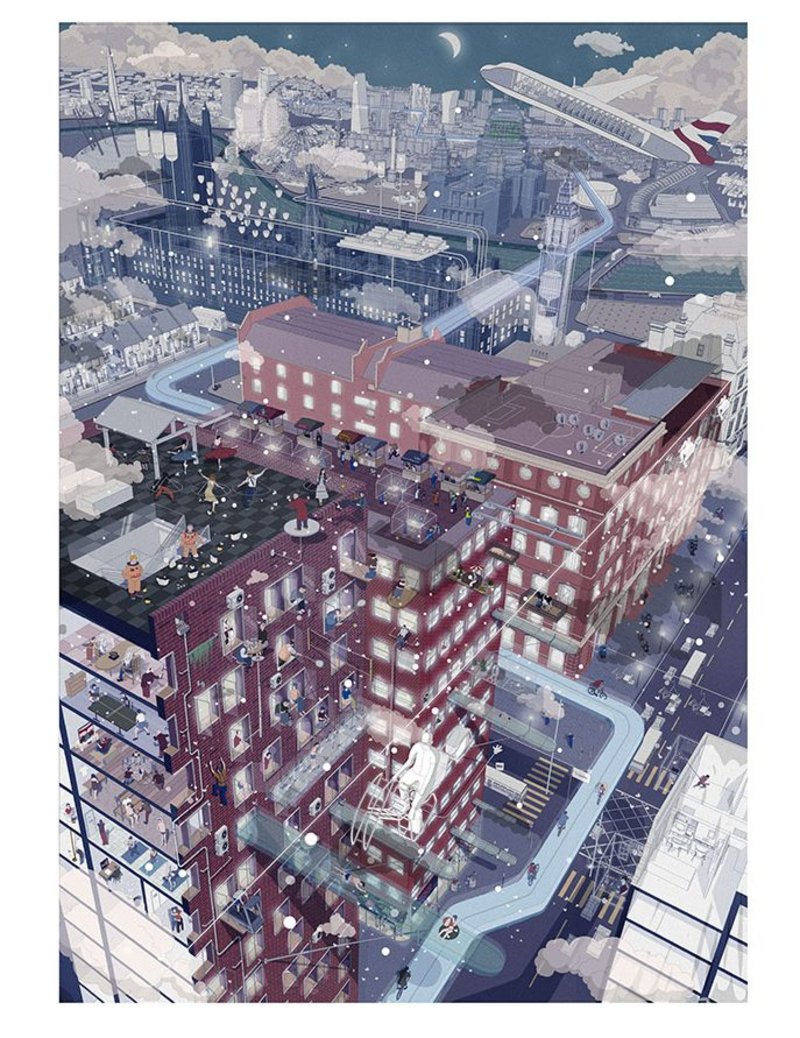 As might be expected, a major theme for the Rethink entries was the street – both residential and high streets. Everyone has spent more time locally over the past few months, yet the threat of emptying units remains and many entrants felt these trends would continue. Likewise, people have begun to appreciate nearby green spaces and an urban realm without traffic noise and pollution – especially as pollution was shown to limit chances of recovering from Covid-19. Greening street proposals came up repeatedly.

Urh Rucigaj’s suggestion was for bees and vertical gardens to occupy empty retail units. Many others proposed tearing up road space and replacing it with cycle paths, green space and pedestrian-friendly areas, as you’ll see in one of our winners’ projects too. Mohammad Qasum Iqbal and Studio Cullinan and Buck Architects’s entries, on the other hand, proposed letting education take over empty retail units – the former as a way for Nottingham Trent University to expand rather than building new, the latter a scheme for schools to do the same in Bow, using digital technology to link it all up. Michael Haslam’s shortlisted project to turn empty shops into homes is a ‘clever way to repurpose existing distressed assets’ said judge Ed Clark, while fellow panellist Francine Houben enjoyed the sink and curtain details.

Reuse and retrofit featured strongly across all types of proposal, as did beautifully drawn ideas of what life could be like by 2025, as well as manifestos on what needs to be changed after 2025. The judges loved Juliette Sung and Ivan TL Chan’s drawings of how the vertical space buildings could become communal space, with tennis played out of the window, pig pens and dairies suspended above the street, cycle routes in the sky and the Houses of Parliament as an epic hand sanitiser production centre. Asif Khan said: ‘It’s tongue in cheek, drawn well, fun and taken to extremes.’ Google AI’s Matt Jones thought ‘it is also quite dark. It’s Heath Robinson meets Black Mirror.’

Will people need or want to live in cities in the future? Some of our entrants think not

Submissions were not always urban based: many tackled the sort of ubiquitous places not often questioned as part of architectural projects. Yvonne Dean took on infilling the 1960s suburban estate, greening it and making it more sustainable with one-person homes, neighbourly balconies and porches – perhaps, as RIBAJ editor Hugh Pearman suggested, as result of a post-crisis exodus from cities.

Sophie Judson proposed the creation of a new Markthalle typology for Meris­hausen, a farming community near Zurich. The longlisted project would be a meeting point and workplace for decentralised office staff and somewhere local people could sell produce and goods – in response to future counter-urbanisation when people will no longer need or want to live in cities, and the socio-economic balance of rural areas is revived. Meanwhile shortlisted Village City (from Stephen and Jan Macbean and Paul Gill), proposed going one step further by clustering villages and providing them with amenity hubs containing a mix of public facilities, an energy centre and extensive tree planting. Within 4km of multiple villages, these would be economic centres accessible by foot or bike. ‘It’s important to have a rural example,’ commented Pearman, thinking about villages where the shop, post office and pub have closed. ‘The critical mass struck me as a workable idea.’ 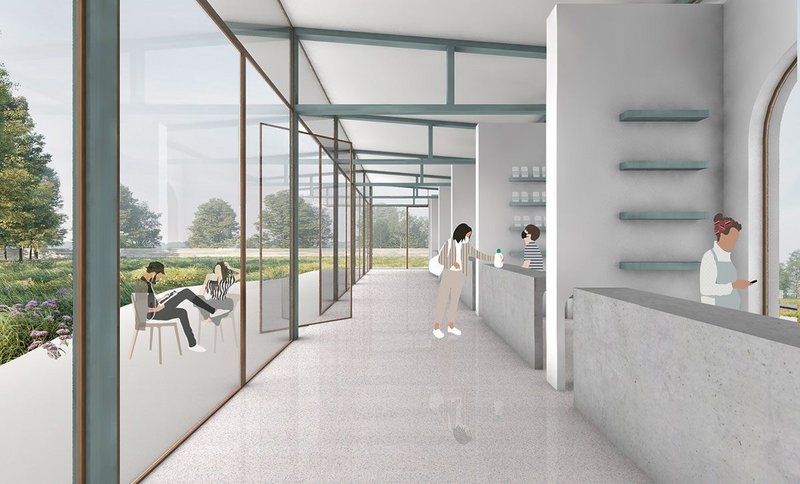 How Sophie Judson’s Markthalle proposal would look and function.

Still commuting – but only as far as the train station

There were, nevertheless, proposals that focused on education and work. Curl La Tourelle Head’s proposal repurposed unused festival marquees as additional pop-up classrooms to accommodate social distancing and was described as beguiling by the judges, although they felt the proposal was too short term in outlook for Rethink 2025. Not quite making onto the longlist was the idea of Deeper Green architect Ian McKay, Teleworking Cities of Tomorrow. He proposed that season train tickets wouldn’t just be for commuting but would give entry to co-working spaces at stations for occasions when people didn’t need to go to the office, but when working from home was not practic­able or feasible – saving many carbon intensive journeys.

Hon Yen Chong’s proposal, on the other hand, begins with the co-LAB app, suggesting that in future people will no longer need to work for one company but earn money by becoming involved only in projects that interest them (dubbed ‘the Hyper-emotional Society’), collaborating with like-minded people connected by technology. As such properties would need to adapt to the fluid nature of work and jobs, through micro-labs integrated into the home. Judge Khan commented: ‘The project transforms the workplace into something more dynamic. It reassesses how we live but also how we work and is presented in a charming way.’

A radical shake-up of how homes are created, and a turbo-charged village hall

And this brings us to home, another major theme, from how to add gardens and terraces to apartment buildings to integrating home workspaces and creating good housing. Ross Kilshaw from Kilshaw and Partners created a Design-a-Shed app to automate the design of your next garden office according to space, daylighting, planning and other criteria.

LAA’s Luca Arnaud suggested adding timber grid structures to apartment blocks to give everyone their own outdoor space – an issue that really made a difference to people’s experiences during lockdown. Monty Dobney proposed radically shaking up how homes are researched and made by creating the Institute of Making Homes in Stoke-on-Trent. This publicly accessible single building would bring research, design, prototyping, manufacture and construction of homes under one roof in a reused building that includes test units for trialling designs and public space where visitors can collaborate.

Finally, Axis Design Architects’ Rob Annable’s Street Support Hub is ‘a turbo-charged village hall’ that provides a parking-space sized street ‘common room’ for decentralised community services. Community-based volunteers and key workers can carry out their work in it but also pause for breaks or use it as a place to clean down. It’s a mini energy centre too, as well as a place for scaling up the boundaries of private homes by making them teaching spaces for smaller groups of children, temporary work from home areas and social space. The judges liked the premise but felt there wasn’t quite enough design to make the shortlist.