The associate director at Glasgow-based conservation specialist John Gilbert Architects has become a heritage cheerleader, saving buildings from the grand to the tenement 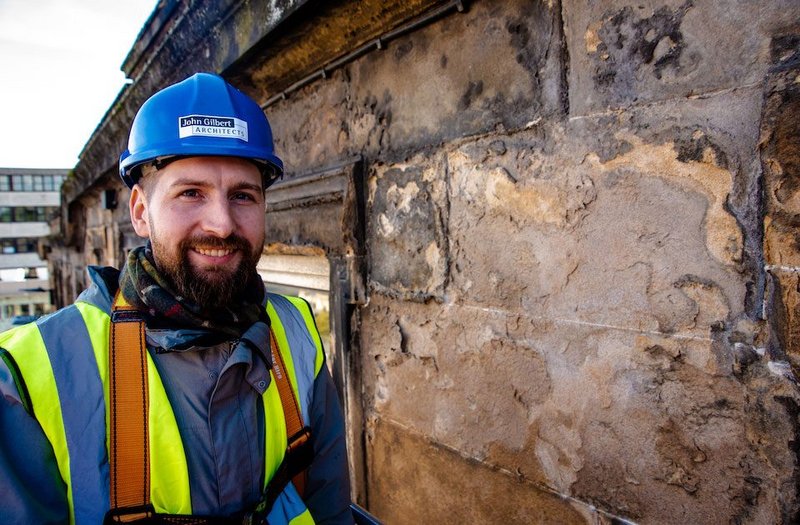 When Scott Abercrombie, then a 19-year-old student, first worked at Glasgow-based John Gilbert Architects – a specialist in sustainable conservation – he unwittingly found himself ‘sucked into the world of conservation’ and promptly ‘fell for it’. After qualifying as an architect, and following a stint at a large commercial firm, Abercrombie returned to John Gilbert and has since gained accreditation from the RIBA and the Institute of Historic Building Conservation, and enthusiastically bounded his way to associate director level.

Conservation can appear ‘a wee bit tweedy’, Abercrombie remarks; it takes 10 years to reach advanced accreditation. He also observes a ‘nervousness’ from existing practitioners towards those less traditional or less militant. ‘Sometimes even being from Glasgow rather than Edinburgh can count against you!’ he says. ‘Retrofit and sustainable refurbishment are often viewed as a threat … it is my view that they should be considered an opportunity to holistically invest in our built heritage and secure it for future generations.’

‘Scott’s work is doggedly determined,’ says his referee, practice director Matt Bridgestock, ‘not just looking to protect a building in aspic but looking at how heritage can be reinterpreted and redeveloped to meet 21st-century needs and demands.’

This approach drew praise from the judges, with Steve Smith commenting: ‘I like that he is a young lad moving into this field … He is someone with new ideas, not following the straightforward path, but doing something different with heritage.’

Abercrombie has encouraged other young professionals to engage in the Glaswegian conservation scene through his position as chair of the Alexander Thomson Society, where he helps coordinate design competitions and organises an annual lecture series (speakers have included Eric Parry and Amin Taha). ‘It’s mainly about luring big-name architects away from London up here to juxtapose with some of our niche, nerdy local interests,’ he says. For three years Abercrombie was the Glasgow Institute of Architects’ conservation committee convenor – yet another thing he has saved from oblivion.

At work, he devised the Tenement Toolbox, an accessible, affordable condition survey for private homeowners. It’s a ‘thinking outside the box’ solution to the specifically Glaswegian problem of tenements in disrepair. ‘Sometimes bits of buildings fall into the street!’ Scott explains. ‘Action needs to be taken and nobody knows how to fund it. We can’t change policy but we can offer a pragmatic way of tackling some of the building maintenance issues and giving people the tools to make the best decisions.’

Abercrombie’s genuine concern for sustainability, conservation and Glasgow’s built heritage is evident. As judge Bushra Mohamed said: ‘In terms of sustainability, making people more interested in reusing the existing built environment is really important … he is interesting, he is young and he is trying to make conservation more accessible to the younger demographic.’

What existing building, place and problem would you most like to tackle?
For me it has to be Alexander ‘Greek’ Thomson’s Egyptian Halls in Glasgow, for which my campaigning resulted in the establishment of a new body, Save Egyptian Halls, led by Scottish Civic Trust. One of Scotland’s most unique buildings by one of her greatest architects, it is category A-listed yet its upper floors have lain vacant and decaying for over four decades. The state of such a prominent and significant building, and its shroud of scaffolding which greets visitors to Glasgow as they exit Central Station, is a national embarrassment. It would be a delight to have the opportunity to find a new and sustainable use for it, and to see it restored.

Read about the rest of this year’s Rising Stars, produced in association with Origin Doors and Windows.