Though the industry mood remains broadly positive, it makes sense to keep a weather eye on the horizon 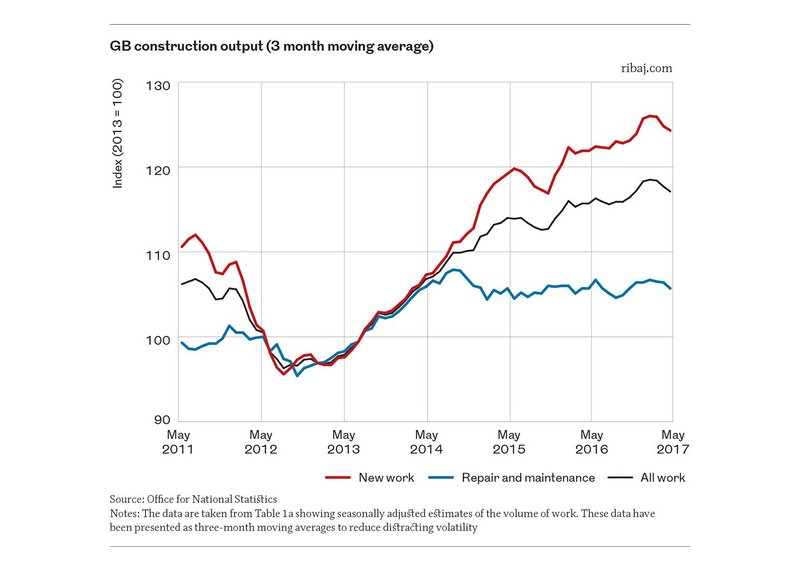 Construction output recorded on a seasonally adjusted basis by the Office for National Statistics fell in April and fell again in May. As we see in Chart 1, there has been a decline in the three-month moving average.

Given the Brexit-fuelled media fuss over unexpected falls in a single data point and a seemingly high level of shaky economic news about at the moment, does this suggest it might be appropriate to start worrying a little?

If the next set of construction output figures show a fall in June, there may be cause to at least raise an eyebrow. But as things stand it would be a surprise to see the industry growth forecasts due to come out over the next few weeks shift to negative, although their expectations for growth may be trimmed.

These forecasters may not be clairvoyant, but they do rake through a large amount of data and talk to a lot of people on the ground before suggesting how the future might pan out.

Also, a point worth bearing in mind when reading the output data, the ONS estimates are not a cast-iron record of construction – but the best we have. Importantly, the figures initially issued for a month are early estimates based on part of the final set of returns from contractors. As more data comes in they are revised in the following months.

So, the latest month or two are not necessarily that reliable. Comfortingly, although not a given, that unreliability has tended to mean upward revisions, suggesting the early estimates have underestimated the final figure.

So is there really anything to worry about?

The general view within the industry seems to suggest a slightly more positive view of activity than one might assume from the output figures. Certainly there is little in the mood of contractors or professionals to suggest the industry is other than fairly stable and reasonably set in the short to medium term. 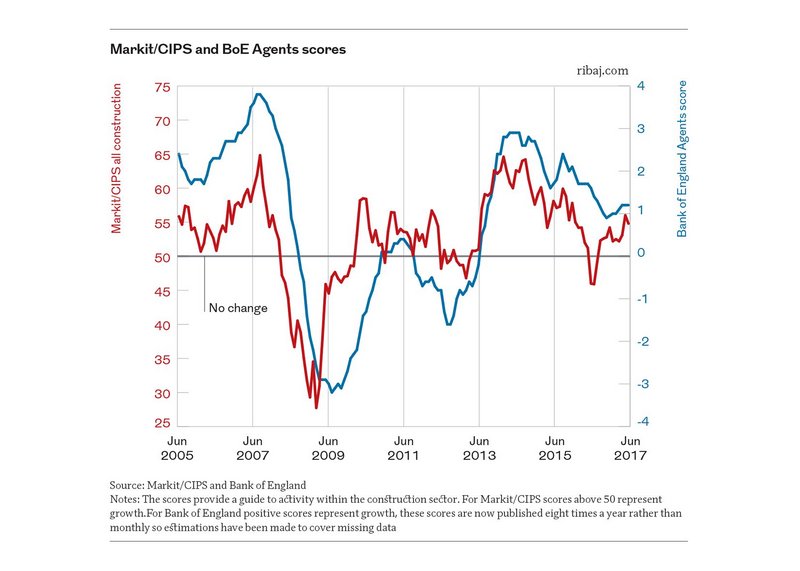 While the survey data from Markit/CIPS and from the Bank of England certainly shows enthusiasm well down compared with 18 months ago, it has bounced back after the shock drop following the EU referendum. But both suggest we are comfortably in growth territory, as we see in Chart 2. 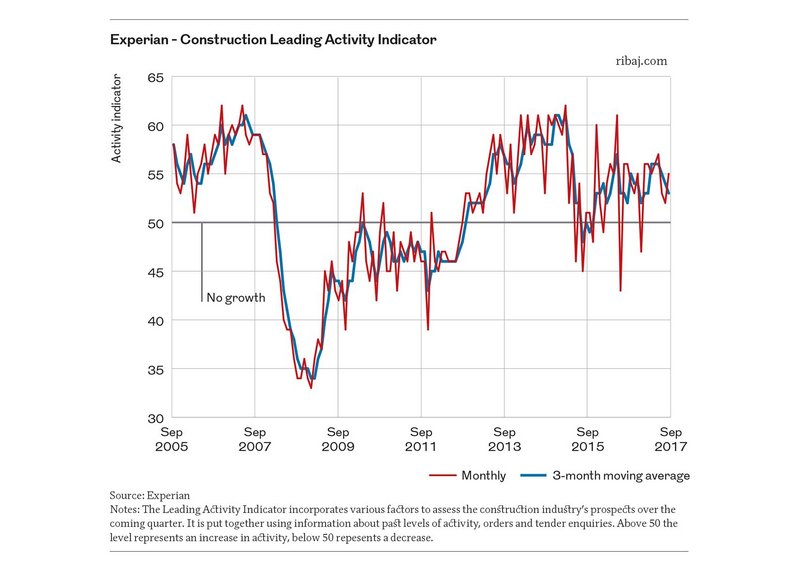 Experian’s leading activity indicator for construction which pulls together a range of factors to assess the prospects of the industry shows a not dissimilar picture (Chart 3). Not great, but pootling along okay. And its projection suggests a weakening of growth in the coming months, but growth nonetheless. 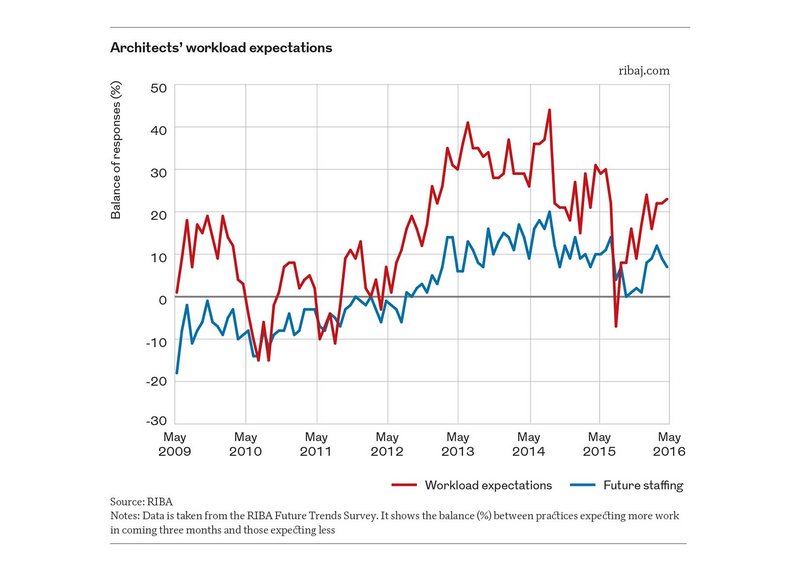 The RIBA’s own workload expectations survey seems to concur. If anything, it hints at slightly stronger growth. Though, perhaps the more salient ‘money-where-the-mouth-is’ test of what practices really feel about their prospects is expressed in their expectation of future staffing. There’s obviously a range of other factors at play over taking on more staff, but if you’re truly confident of the work ahead, the chances are you’d be more likely to boost the payroll. Here, in Chart 4, we see a far less bullish view than for the perhaps less tangible ‘workload expectations’ measure.

You can look at a range of other indicators providing signs of activity across all aspects of construction from the ONS construction employment data, to brick deliveries to the Builders Merchant Building Index and find few signs of imminent danger. But in reality most of these indicators tell us more about the past than the future.

The biggest determinant of construction activity is the economy at large. Historically construction appears to require at least modest growth in the economy (as measured by GDP) over a reasonable period for it to show any growth. Looking at data since the late 1950s, it would seem, broadly speaking, that for growth in construction GDP needs to increase by around 5% over a three-year period. If economic growth is much higher, economic construction starts to race away.

Obviously this is a guide rather than a rule. Even so it makes for rather gloomy reading to see the very weak 0.2% GDP growth in the first quarter of 2017. And, looking forward, prospects seem rather iffy at best. The average of an array of independent forecasts compiled by HM Treasury each month suggest a sustained period of annual growth well below 2% through to 2021.

That would see the three-year increase in GDP drop below 5%. So if the economy follows the path of the Treasury averages we might expect the construction industry to be flirting with recession in the years ahead. 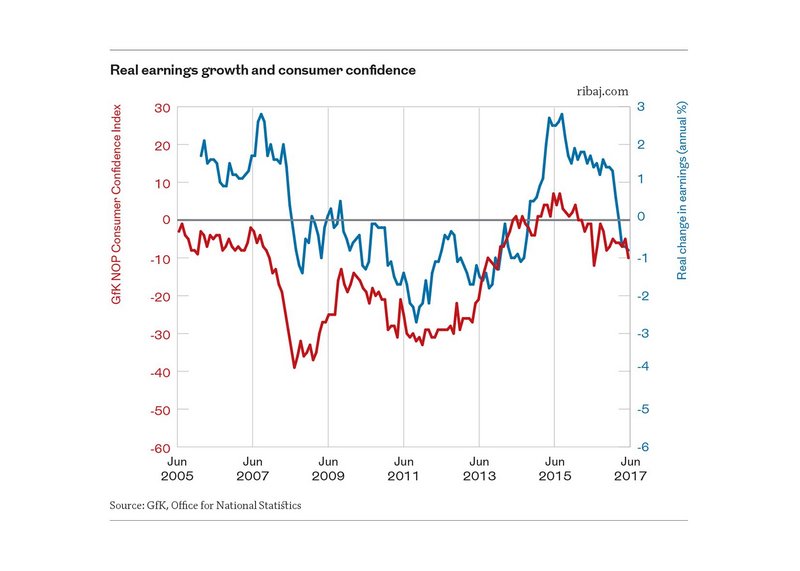 Within all this is a particularly unsettling trend – the squeeze on households’ disposable income as they are caught between rising inflation and low wage growth. Consumer spending has been a powerful driver of the UK economy, but real earnings are falling and this is leading to a decline in consumer confidence which is particularly hitting big-ticket spending. Chart 5 shows the fall in real earnings as measured by the ONS and the pattern of UK consumer confidence as measured by Gfk on behalf of the EU.

Looking for more immediate indicators, they are mixed. Various retail sales monitors suggest that in the months to June things remained mildly positive. At the other end of the spectrum VISA’s UK Consumer Spending Index showed a decline in spending in the second quarter – its worst numbers since autumn 2013.

So, scanning across the data appears to unearth no clear and present danger that might prompt a sudden and significant dip in construction activity, but reveals plenty of things to keep tabs on, particularly if your workload is in sectors that are propped by consumer confidence.

With an industry as large and diverse as construction there will be a wide spread of fortunes and these will morph as the economy shifts. While overall the industry might mosey along gently, some sectors may take a hit.

There is certainly plenty to be cautious about, but ultimately, as the cliché goes, you shouldn’t worry about things you can’t control. And things like fixing consumer spending are well outside the remit of architects. But given that consumer activity eventually impacts on how work flows, it is sensible to keep an eye on developments, anticipate changes and adapt accordingly.

More importantly there are things closer to home that may need attention if construction activity is easing. After a hideous and extended squeeze on fees, in 2015 there was a return to increases in the price of architectural services in real terms taking into account inflation. This was important as ultimately fees pay the wages and determine how much staff get paid.

However, the latest data from the ONS that records inflation in architectural services shows that while fees are rising in nominal terms, they are once again rising slower than consumer inflation. 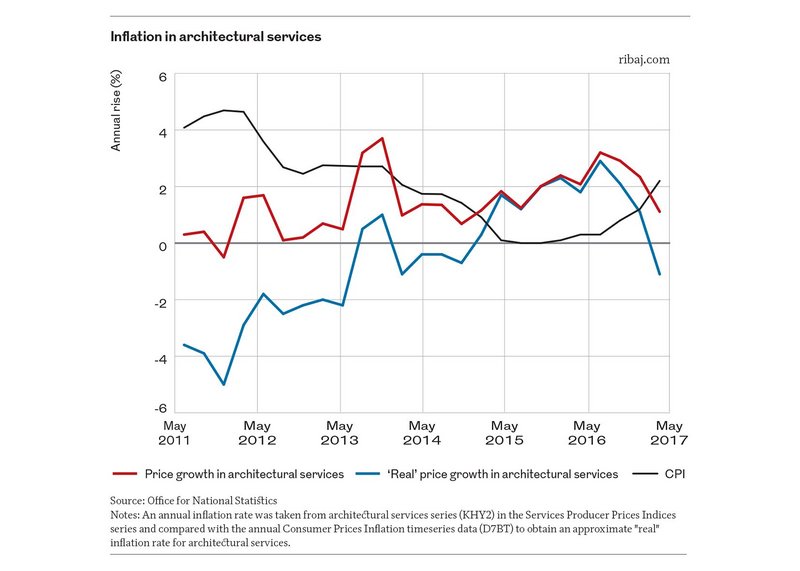 Chart 6 shows that when we adjust inflation in architectural services for consumer inflation the ‘real’ price growth enjoyed over the past couple of years has ended.

Now, if this is a result of productivity gains driving down prices with more being delivered for less hourly effort, this is not an issue. Indeed that would be encouraging and solid progress.

But if it’s an early sign of workloads slackening in some quarters, or practices once again tempted to ‘buy’ work or take work on at low margins to ensure continuity or growth in workload, the outcome may prove very uncomfortable. Within a profession that sees itself as undervalued and with staff that feel underpaid, moves to avoid thin margins and to build more healthy prices would seem to be a wise longer-term strategy, even if that means eschewing poorly paid work.

That’s not an easy task to take on within an industry – construction – that has a reputation for having a higher regard for price than value. But it may be a good investment for the future.