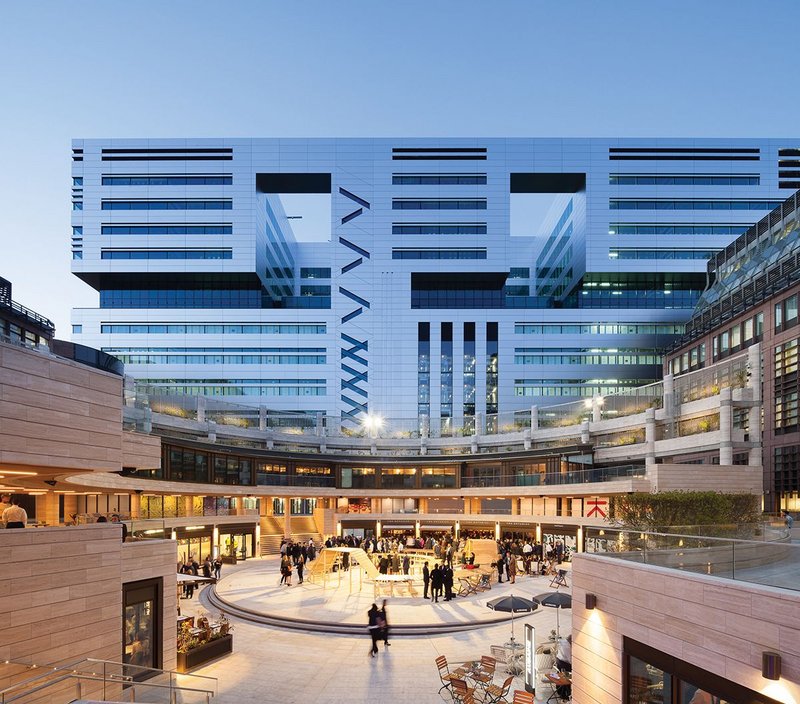 5 Broadgate is unusually low-rise for a City building but its huge footprint means there’s a lot of roof to keep watertight.

Make Architects’ 5 Broadgate is a true ground scraper – a rare breed among the City of London’s high-rise towers. Despite a mere 12 storeys of offices, its generous width ensures it yields over 65,000m2 of high-spec office space, including four football pitch-size trading floors topped with some 7,500m2 of concrete-decked roof and terraces.

Ensuring that this unusually expansive flat roof was waterproof was an absolute priority. A joint venture between British Land and Blackstone, 5 Broadgate will be occupied from next autumn by financial services firm UBS.

‘When you’re dealing with a project of this scale and its complexity of interfaces, water ingress is a real concern,’ says Make’s Ben Stuart, who was package architect for roofing, basements, structure and services. ‘We had to have robust and reliable detailing delivered by contractors who could assure the highest standard of workmanship within the given timescales.’

To ensure optimum yet cost-effective waterproofing that would last a minimum of 30 years, Make worked closely with the contractor BriggsAmasco on an inverted roof system where IKO PermaTEC hot melt waterproofing was specified.

Following buildability reviews with construction manager Mace, other roof build-up options, including warm roof, were discounted because of concerns over protection of the waterproofing during construction. An important benefit of the inverted roof was that it could be installed more quickly than other systems as well as being easier to protect.

A third option was an inverted roof with cold-applied liquid plastics rather than hot melt. This was rejected for most of the main roof covering because of its shorter lifespan (20 years) and higher cost. The extra time required for hardening was also less viable in the context of the roof programme as a whole.

The speed of the hot-melt waterproofing  meant Stuart was able to complete sequential quality inspections safe in the knowledge that it would then be protected immediately following the installation of the insulation and subsequent pouring of the concrete slab.

The waterproofing is part of a 600mm roof overcladding build-up consisting of a 200mm concrete slab, a 7.5mm hot-melt rubberised bitumen membrane, a 200mm thermal extruded insulation and drainage mat, and a 150mm floating slab.

The architects were advised that proper installation was vital to the success of hot-melt waterproofing and therefore increased the number of quality inspections as well as agreeing sequential sign-off inspections with Mace. This was particularly challenging for specialist contractor BriggsAmasco as installation took place in mid-winter, requiring temporary protection to ensure a dry surface.

Installation began with an independently monitored peel test before the rest of the application went ahead. First, ‘latents’ were ground off and the area cleaned and primed before the hot melt was applied. Twenty-four hours later, the waterproofing’s bonding was tested to check that it could withstand an attempt to peel it off.

The PermaTEC system consists of high penetration primer, two coats of the 3mm PermaTEC waterproofing membrane with a PermaFLASH-R reinforcement layer in between, and the PermaGUARD-F protection sheet. All these layers were applied before the installation team began work on the next, adjacent area – unlike many cold applied liquids there is no need to wait until each hot melt layer hardens.

Leak testing
After 15 minutes, the roof was ready for the next stage. Electronic leak testing was carried out to identify any problems and localised repairs made. This was followed by installation of extruded polystyrene insulation board – Roofmate SL-A – then the IKO Plasdrain 6 loose-laid drainage mat. This was all topped by the overslab of 150mm poured concrete with pavers and ballast used in areas of light traffic.

For the roof of 5 Broadgate, the most challenging aspect was designing waterproofing solutions for about 100 vertical roof penetrations by perimeter structural steel elements and posts/columns.

Here, Make helped the contractor develop the most robust approach to a tailored ‘pitch pocket’ which was able to deal with each situation. Typically, a concrete upstand of 50mm was constructed around the vertical penetrations. This acts as a first line of defence and lifts the waterproofing detail out of any standing water. Then, a minimum of 50mm galvanised formwork was bonded into hot melt to form a pocket around the penetration, and the pocket filled with more PermaTEC hot melt, with protective felt on top. A key advantage of using a hot melt pitch pocket is that it remains soft, so when the steel expands in the summer, the hot melt will be able to move with the column. 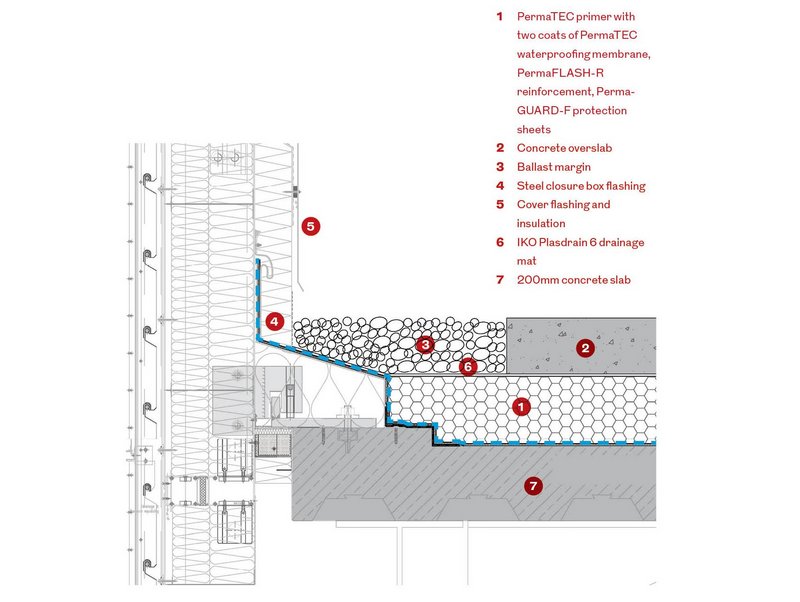 The crucial area to solve was the 15m spliced support truss. An unexpected issue was that the bolts connecting the splice plates were cast into the structural slab at the perimeter, and so required a rethink of the waterproofing detail. The solution was a bespoke cover with base flashing over the truss followed by the PermaTEC hot melt system then a complete covering of liquid waterproofing. This was subjected to a 48-hour flood test to ensure complete water tightness and created a successful hybrid system of hot melt and cold liquid applied plastics.

Such bespoke hybrid responses to the challenges of the various roof penetrations were essential.

‘The success of the roof waterproofing was a team effort, including contractor, architect and construction manager, in order to manage the complexity and maintain the high standard of workmanship,’ says Stuart.

Conceived as a single cast element with glazing confined to necessary areas, it was awarded a BREEAM Excellent rating at design stage with the roof achieving a U-value of 0.20. This helps contribute to 5 Broadgate’s energy conservation levels being nearly 50% better than regulations require.

To find out more and download additional resources visit http://bit.ly/SIGRoofLines6