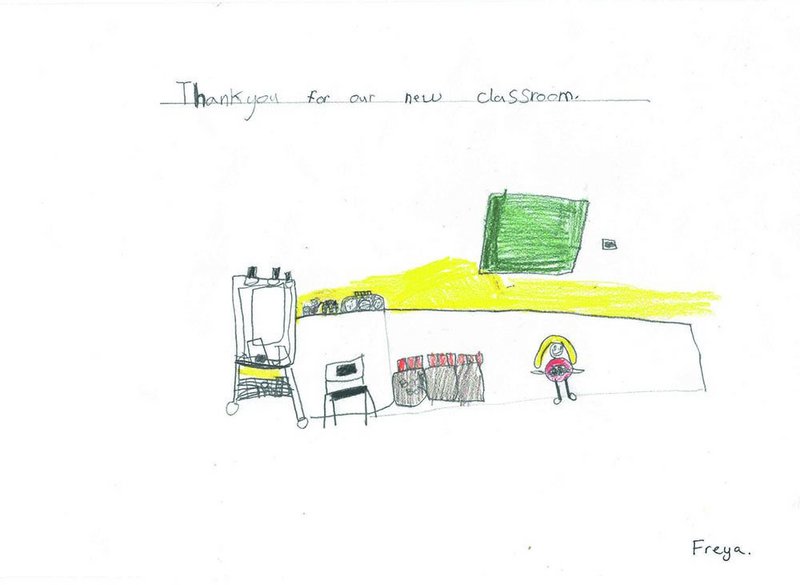 Until local procurement changes WPP Architects had a large proportion of work in small education projects – which the children, at least, seemed to appreciate.

Alan Wilkinson of WPP Architects left the government-organised procurement conference that kicked off the political season rather dejected.  Its message was that while central government is doing what it can to reduce the procurement barriers to small firms, it can do no more than encourage local authorities to do the same. But for WPP and hundreds of practices like it, the procurement strategies of their local councils are critical to their livelihood. Local authorities spend £20 billion a year on capital projects.

In the early noughties Wilkinson’s practice had 70% of its work in small education projects such as a few extra classrooms or a school hall. In 2005 it lost about 25% of this overnight, as Suffolk County Council switched to bundling its projects and the work became subject to EU procurement rules. The practice has continued to work in education and to find a place on multi-disciplinary teams in frameworks – notably with Essex County Council. Increasingly, the only positions are on a contractor’s design and build team for projects. But the opportunities for winning small scale local community projects has been drastically reduced, and Wilkinson believes it is getting worse. A recent pre qualification questionnaire he picked up for a project of £1.5m demanded professional indemnity insurance to the value of £10m. ‘I struggle with premiums for cover of £5m,’ he explains. To add insult to injury it required a Dun and Bradstreet failure report score card number.

Top of the agenda at the government procurement conference was reforming the process – something the Coalition has been talking about for some time. As RIBA Journal went to press, Vince Cable was setting out his stall for taking on the EU procurement rules on the Radio 4 Today programme. ‘We’ve been a bit too defensive about the European Union rules,’ he asserted. ‘We don’t want to become protectionist and nationalist in the way we buy things but we think we could do a lot more to promote British business through procurement.’ While the national papers picked up on this in the context of major infrastructure projects – such as Crossrail’s £1.4bn train contract being awarded to Germany-based Siemens – some architecture practices were thinking about closer to home.

Wilkinson is just one of those who has been mobilising the RIBA’s Suffolk branch on procurement in recent years. As the county’s first Suffolk Business Month launched, RIBA Suffolk members pointed out the uncomfortable position of the Conservative council pledging to support local business while its own framework agreements result in the exclusion of most of its local practices.

RIBA Suffolk has exercised some influence but it is tenuous. Notwithstanding an 18-month discussion about proportionate PII requirements and reducing project bundling before the last round of tenders for Suffolk County Council’s framework agreements, the council produced the ‘showstopper’ of a £5m requirement for PII. A challenge saw the requirement reduced to a commitment to £5m only if successful. It is seen as a factor in the successful framework teams which have been characterised by national names such as Pick Everard, NPS and Atkins. The last two frameworks have had only one fully Suffolk based practice within the latest framework.

Some practices which had worked for Suffolk County Council before no longer even bother to apply. Richard Scales, partner in the two-architect strong Modece Architects says that the ‘conditions are now too onerous’. Since OJEU rules have been applicable to Suffolk projects it has been ‘excluded’ from the minor works it had previously been able to do for the county. Modece has experience of working closely with other practices – Studio MGM with Mole Architects lasted a few years before they went their separate ways. But the idea of a consortium raised more questions than they answer, believes Ralph Carpenter of Modece. ‘The PQQs would just be too difficult. I would rather get the county to unbundle projects.’

OWL’s Simon Smeaton admits it is a mystery how the practice got onto the framework. He is not even sure it fulfilled all the criteria

The lone Suffolk practice on the county council’s current framework was Lowestoft-based OWL. When it won the projects it was 10 strong, though now there are only six staff. OWL’s Simon Smeaton admits it is a mystery how the practice got onto the framework. ‘I’m not sure what tipped the balance in our favour in terms of those we were competing against,’ he says. He is not even sure it fulfilled all the criteria, though it did answer all the questions including some, particularly around fees, that were very confusing. He questions not just the gatekeeping of procurement (‘PQQs are nonsense but have become commonplace’) but also how they are structured to secure quality outcomes. There is retendering for each project within the framework, including revised fee bids and a great deal of weight placed on cost. All for very few projects.
OWL has had three projects over three years in the framework, starting with All Saints School in Newmarket. Within the framework fees can only the same or less than the original fee bid. ‘And in the hungry market fees hit the deck,’ says Smeaton. ‘We were doing work we weren’t making a profit on.’ Smeaton blames architects, including himself, for this as much as the authority. But it’s not the only profession getting disaffected. ‘Architects, quantity surveyors, engineers and service engineers, are all feeling the same and feeling frustration.’

In the construction world with large firms in contracting and many other disciplines, architects can feel like a special case. Research for the Federation of Small Businesses shows how procurement methods are affecting all types of small businesses (which they categorise as up to 49 employees). Its survey found that almost half local authorities did not know the sizes of businesses they were trading with, and a third of authorities didn’t feel that small to medium sized enterprises face barriers in accessing procurement opportunities. That compares to 60% of the federation’s members who felt there were barriers. Two of the federation’s demands chime with small practices: the streamlining and standardisation of pre-qualification processes and the unbundling of work.

The Construction Industry Council has also been piling on the pressure. Among other things it calls for a more balanced scorecard, based less on price in deciding who should win a job, and expert advisors to help local government through procurement. The Suffolk Branch has also of course fed into the RIBA procurement document Building Ladders of Opportunity (see box) and would endorse many of its recommendations. Could construction’s biggest client, the public sector, really become more equitable in its procurement? Maybe. ‘I am not holding my breath waiting for change,’ says Wilkinson.

WPP has had some success in securing a place on frameworks as Willowbrook Primary School for Essex County Council shows. But the procurement landscape is changing.

Further examine the best ways to drive efficiencies and savings to ensure the public procurement system functions in the best interests of all those it serves
> Remove any ‘gold-plating’ and ambiguities and align UK practice with best practice in other EU member states
> Clarify and simplify processes and language, supporting public clients through guidance and training
> Reduce time and costs of tendering process, and introduce timescales for bid assessment
> Change work practices and methods
Embed processes that ensure buildings are sustainable by focusing on design outcomes
> Focus on processes and incentives that drive quality and outcomes
> Embed assumption in favour of sustainability at all stages of procurement and ensure that it is properly incentivised
Create a competitive market by increasing access and allowing the public sector to take full advantage of UK design talent
> Government should provide clear guidance to public clients on when ‘aggregation’ is appropriate, as well as bundling, and encouraging the use of lots
> Enable access for micro businesses and SMEs, and ensure greater proportionality in their treatment
> Commit to reviewing OJEU threshold values and the effect they create

For the full report see www.architecture.com