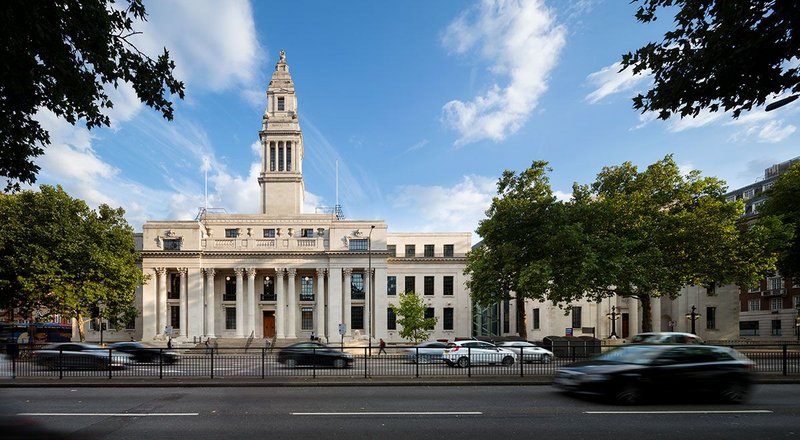 Not so long ago the Portland stone of the piers and corners of Old Marylebone Town Hall’s Council House Annexe was riddled with alarming cracks. The town hall had housed a library and local administration, most famously conducting the weddings of Paul McCartney, Ringo Starr and Antonio Banderas. But with the offices of Westminster Council now elsewhere and the grade II listed buildings in urgent need of repair, the council was looking to lease it, ensuring the investment it needed.

Sheppard Robson had been assessing the town hall as a decant option for London Business School while it had work done on its John Nash base. It soon became clear that it was a serious contender for a more permanent expansion of the school, but the facades would need immediate attention. This and two other concerns drove the design of the envelope: the Council House and Annexe needed to be brought together across the dark chasm that ran between them, and a sizeable lecture theatre was needed – both to gather students and to continue to accommodate Westminster’s peripatetic council meetings.

But first, the original buildings. Both are designed by architect Edwin Cooper but speak of quite different eras, one the grand town hall from 1914 with flourishes of decoration on its loadbearing facade, and containing a marble-clad stairway where the weddings spill out. The annexe is a 1930s addition that has an ostensibly simpler approach, with modernism starting to make inroads into an Edwardian classical tradition. It held a health centre and library among other things. Here new building techniques are now being tried out, with a steel frame behind the stone facade.

The annexe had what is sometimes known at Regent Street Disease, or in Manchester Deansgate Disorder. During the early 20th century, steel frames were embedded within stone facades without cavities and the results of any water getting in can be catastrophic. On the town hall the 10mm steel flanges had expanded up to 50mm with corrosion pushing the Portland stone out of place and causing it to crack. Recladding, with the potential of undamaged stone being fractured in the process, came out at £1million more than the alternative, cathodic protection (see box). Running a positive charge through the metalwork prevents further corrosion and can also be used to monitor further movement. All you can see from the outside is tiny insertions into the stone.

Cathodic protection doesn’t obviate the need for stonework repairs. New stones have been spliced into place and of course the roof has been repaired to stop further water getting in. Water ingress had also distorted the frames of the cast iron panels above the windows, which had suffered badly over time, particularly those facing west. The planners were keen the windows be retained rather than replaced, but surveys revealed that many were already replacements from the 1940s. Hall Conservation brought the frames for the cast iron panels back into realignment while also working on around 300 new double glazed windows. There were so many window handles that it was cost effective to rework the originals. The best of a variety of shapes was picked out, very slightly adjusted for ergonomic reasons and used to cast new bronze-finished brass handles.

The space between the two buildings was dark, with bin stores and a high stone bridge over it. Sheppard Robson saw the possibilities of joining the two buildings using a set back glass link with a sunken entrance which would bring students into a spacious foyer on the lower ground floor rather than at street level. This had the advantage of making access controls and the reception desk less intrusive and brought light into the opened up basements. But when it came to deciding where to place the structure for this glass skin it was a little more complex. Initially, a rational concept put a structure straight across between the two buildings. But the almost-rational approach meant it was uncomfortably trapeizoidal, while still colliding with window jambs. So instead Sheppard Robson allowed the structure to be ‘designed by the existing buildings,’ as associate Paolo Longo puts it. An irregular diagrid was created by joining the middle point of every structural element on the historic facades, such as the pilasters. The most efficient spans were chosen as the primary structural members – the different structural members given a sense of coherence by 8mm steel loop plates sheathing the T-sections. Reinforcement is given by a secondary structure of tubes. The effect is of a light skin of glass and an interesting – but not crazy – structure.

One other section of the facade got special treatment from Sheppard Robson. Facing onto a quiet side street at the back of the building is a small extension. Replacing a 1960s TP Bennett scheme, but using its foundations, the lecture theatres are pushed out from the old building line behind a wonderful, monumental wall of Portland stone (see box below). It appears to fold over the top of the building before dropping down to hang remarkably lightly, barely touching the existing building.

Inserting the new, larger lecture theatre into the existing fabric presented a challenge and required the demolition of the existing 1960s infill (inserted following bomb damage during WWII). The new structure featured increased floorplates on the upper levels, that project by 1m from the original building line, overhanging the perimeter light well.

The layout of the larger lecture theatres on the upper levels meant that a solid facade was required, which was expressed as a new intervention. Physically separated from the existing structure, the solid stone plane (30m long by 10m tall) projects from the building, dramatically suspended above two storeys of curtain walling.

This stone facade has a chamfered edge physically separated from the period elevation by a glazed strip on both sides and on the soffit of the protrusion. These also provide indirect natural daylight to the lecture theatres.

Giving the stone-clad facade a monolithic appearance was achieved by expressing it as a series of large panels, made up of individually set Portland stone vertical slabs, 1m tall and 330mm wide, with only the vertical joints pronounced between them.

Precast concrete panels, each weighing 4.2 tonnes, form the cladding support, installed as six stacks of five. With each panel weighing four and half tonnes, this tested the limitations of the site crane. In order to negate the need for horizontal movement joints in the stone cladding, each stack had to behave as one solid concrete panel and therefore required deflection values close to zero. This was achieved by fixing these to the structural steel columns only with specially designed stiff brackets.

In order to deal with differential movement due to wind loadings, the precast support panels were dowelled together, minimising movement to small incremental values within the parameters required for the stone cladding.

Cathodic protection – how it works

Steel corrosion is an electro-chemical process requiring the presence of water and oxygen. On a microscopic scale electrons move from negatively charged areas of the surface (anodes) to positively charged areas of the surface (cathodes), a subsequent chemical reaction forms hydrated ferric oxide or rust. Rust has between six and 10 times the volume of steel, and on the annexe it is this expansion, mainly on embedded columns lines, that caused the cracks in the Portland stone.

The cathodic protection system introduces a very small electrical charge and a sacrificial anode that turns the entire steel surface into a cathode, and the electrons migrate primarily from the sacrificial anode, controlling the progression of rust on the steel. Anodes were spaced at approximately 450mm centres close to the embedded steelwork. To preserve the stonework we ran – unusually – most of the associated cabling on the internal face of the building behind the finishes. A monitoring station enables the contractor to periodically inspect system performance.