Tŷ Pawb houses a market, multiple community events and an art gallery all in one former car park

The ‘People’s Wall’ is a trivision billboard featuring work by artists with the community. Integrated seating allows shoppers to ‘inhabit’ the wall. Credit: James Morris

It was a cold, mizzling day when architect Sarah Featherstone, curator James Harper and I visited Tŷ Pawb, Featherstone Young’s newly-refitted arts centre and covered market in the north Welsh town of Wrexham. The name means Everybody’s House, and like a house, it accommodates and welcomes one and all: gallery visitors, shoppers, passers-through, and rain-soaked journalists unprepared for the wet Welsh weather.

Funded by Arts Council of Wales and the Welsh government, Tŷ Pawb is a ‘quiet retrofit’ of a former multi-storey car park. The imposing and awkwardly-placed brick behemoth had loomed since the 1990s over a no-man’s-land at the end of the high street, near a collection of warehouse-style superstores that skirt the ring road at the edge of town. The site had also housed the ‘People’s Market’, one of three markets in Wrexham, but whose popularity had dwindled over time.

From the outset it was agreed that relocating the Oriel Wrecsam gallery (Tŷ Pawb’s previous incarnation) should not displace the stall holders. Yet, perhaps inevitably, this group put up the most vocal opposition. Featherstone says one particularly grumpy poster saying ‘If you want art…go to Chester!’, became an impetus to prove art needn’t be a minority interest. That art gallery and market vendors could not only coexist harmoniously, but actively benefit each other, led to an innovative business model which integrates the revenue-generating market and car park into the programme of the internationally-recognised arts organisation. The concept is as timely as it is original: ‘Every town in Britain has a car park like this’, states MacEwen Award judge Hugh Pearman. ‘If we are going to have fewer cars, we’ll have more of these [opportunities] for re-use’.

After leaving its original home, Oriel Wrecsam temporarily moved into a vacant unit alongside the traders, initiating a relationship which would develop organically over time. The liminal location of the site turned out to be key to the project’s success and its identity as a place of connectivity. Much like the covered arcades elsewhere in the town, Tŷ Pawb now acts as a convenient and convivial cut-through between the disparate shopping areas; four entrances enable this circulation, and an improved entrance on the out-of-town-facing side significantly lifts that profile of both building and street. Combining market with art gallery, and linking previously unconnected retail zones together, has healed several ‘physical and psychological rifts’, says Featherstone.

The budget is £4.5 million, which judge Kathy MacEwen points out is ‘a lot of money for Wales’. But rather than wasting this on what Featherstone calls ‘prettifying’ the exterior, the beauty of the radical new model lies on the inside. The set-up makes use of an experimental concept which the architect describes as ‘baggy space’ – minimal-intervention, loose, permeable spaces, defined and shaped by different uses at a given time. Judge Cecilie Sachs Olsen points out that sometimes non-prescriptive interior spaces risk being unsuccessful: ‘too generic and generating waste through constant rebuilding, unlike stable rooms’. But this is not the case here: ‘This is more solid, permanent and serious’, she observes.

Deviating slightly from the original brief, the portion of the ground floor designated specifically to the arts centre comprises one large gallery and one performance space, with acoustic panelling and retractable seating. A semi-open space, formed by the backs of these two defined rooms and the gallery shop, can be used for virtually anything: smaller-exhibitions, workshops, events – it’s an open proposition.

Around the perimeter of the ground floor are the integrated market stalls and a food court; with an open space in the middle called Sqwar y Bobl (People’s Square). Here, moveable street furniture, seating and tables – designed and made by local artist Tim Denton in collaboration with school groups – helps to extend the streetscape into the building. Free wi-fi encourages people to linger and settle.

Part of this central area can be further screened off with translucent plastic strip curtains – a nod to the retail/market aesthetic – which divide the space into smaller zones. On the day we visited, a local adult daycare group was busy enjoying a Christmas lunch; music from the band entertained both diners and shoppers while the partitioning created a cosy, semi-private space for those eating. There is a genuine sense of community integration and a generosity to the architecture. This is a ‘good example of an approach to re-use that really works’, says Sachs Olsen.

Maximum visibility was crucial to the design, partly to allow light into a deep plan, but also due to the art centre’s strategy of making art accessible. The main gallery has three internal windows which allow shoppers to see directly inside. On the upper floor, studios rented to artists and meeting rooms for gallery staff overlook double-height spaces onto the market below. Blockwork, timber panelling and mesh screens (an admirably ‘restrained’ palette, says Pearman) are all placed to offer glimpses between sections.

A window into the remaining car park frames a sloped spiral ramp, giving the impression that vehicles are about to coast gently down the stairwell. This playful element embraces the mixed uses of the building: art is omnipresent in everyday scenes, and everyday scenes have the potential to become artistic.

Tŷ Pawb subscribes to ‘Arte Útil’, a curatorial approach which sees art as a vehicle for positive social change. The schedule for the day of my visit is a good indicator of the breadth of the programme. It was: a disability voting workshop, Santa’s grotto, an exhibition of artists’ prints and a mentoring programme with Ghanaian artist Harold Offeh. The latter is related to Tŷ Pawb’s involvement as the leading Welsh organisation at the Venice Art Biennale. In addition to the above, Tŷ Pawb collaborates regularly with artists for the ‘People’s Wall’, a huge indoor trivision billboard. The current artist is Lydia Meehan who works with asylum seekers in Wales.

If the team here wasn’t busy enough, Harper often find himself addressing left-field queries from the general public and stall holders, including being told face to face what people do and don’t like about what’s on in the gallery. Other, less courageous, curators might find this outside the job description but all the team take it in their stride. This unexpected outcome of sharing space offers a rare and valuable opportunity to gain direct, immediate feedback from a demographic that would never ordinarily engage with the arts. ‘It’s certainly never boring,’ he assures me, as the band plays Elvis Presley in the background. He’s not wrong; the venue has clearly taken on a life of its own. 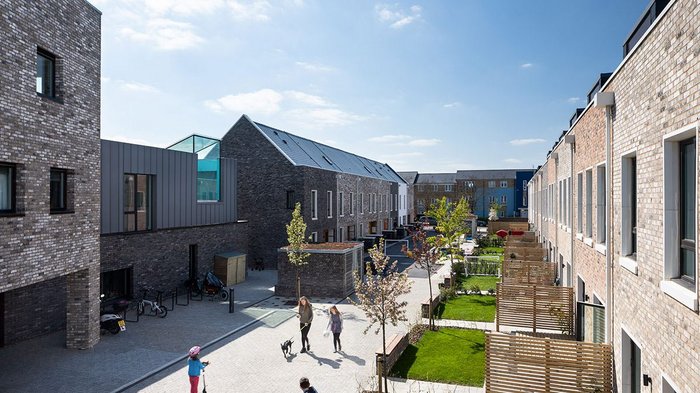